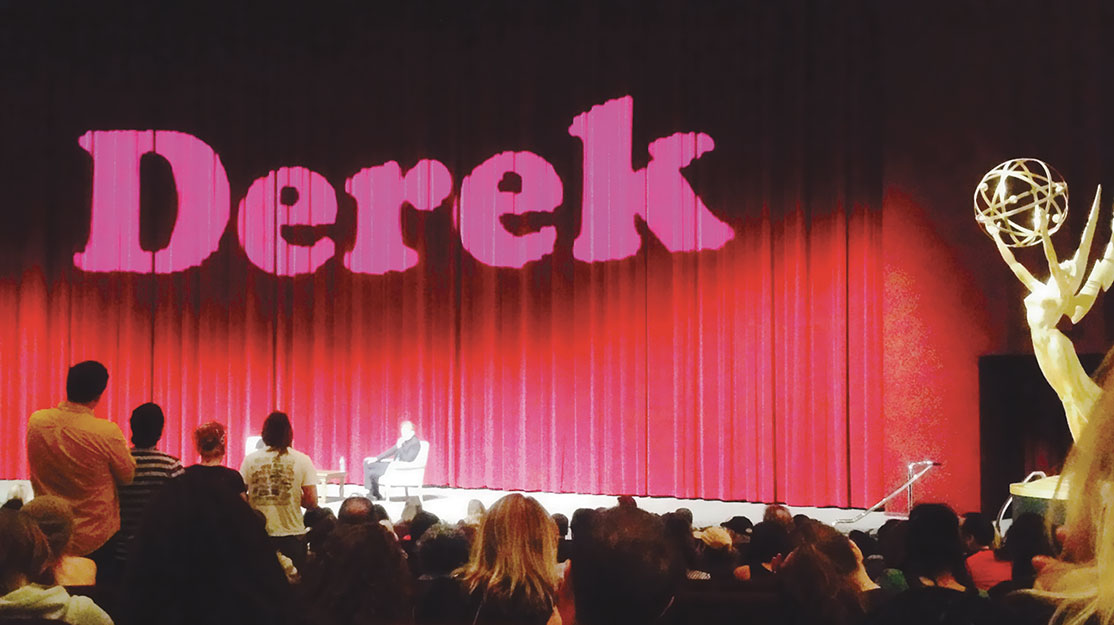 With the script for the pilot of my show The Grass is Always Greener in the bag, it was time to hit the mean streets of Los Angeles and start hustling. The thing about Hollywood is that it’s not what you know; it’s who you know. And unfortunately for me, I didn’t know anyone.

I had, however, become acquainted with a leathery ex-agent while playing paddle tennis on Venice Beach. He had read my script and thought it showed some promise, so decided to come on board as my unofficial representation. I think everyone in LA knows somebody who ‘knows somebody,’ and this chance meeting somehow led to a game of kiss-chase with William Morris Endeavor – one of the biggest talent agencies in the world. I seemed to have stumbled, or maybe served and volleyed, my way into the big time at the first attempt. Could it really be this easy? Maybe it was written in the stars.

During this prolonged process, a friend in LA who worked in TV gave me a call. He was heading out of town and wanted to know if I’d be interested in taking his tickets for a Q&A with Ricky Gervais. The invite-only soirée was to be held in Hollywood to celebrate Derek’s second season launching on Netflix. My friend knew I was a massive fan of The Office and would jump at the chance, though my gracious acceptance came with a side helping of ulterior motive.

I had actually seen Ricky perform a preview of his stand-up show ‘Animals’ in a tiny Soho theatre 12 years earlier. It was a private gig with probably no more than 100 people in attendance. After the show, Ricky came out to the bar for a beer and sat affably chatting to audience members. I was praying the same might happen in LA, as I really needed to speak to him about my script.

One of the supporting characters in my pilot would almost certainly need approval from Ricky and his legal team due to the dialogue. I was hoping to have a quick one-on-one chat at the bar with the big man himself to explain my idea and find out his thoughts. Not a pitch per se, more a premeditated meeting of minds. A kind of light, breezy stalking, some might say.

I arrived at the Leonard Goldenson Theatre with my script neatly tucked into my brand new faux-leather folder. I had just come from standing behind Carl Weathers in the queue at Staples on Lincoln Blvd while procuring said binder. Was this a lucky sign? Was I now attracting elderly Hollywood royalty with my new showbiz magnetism, even in a low-level stationery emporium? To be fair to Carl, he was wearing sweatpants and flip-flops, and paid me far less attention than I did to him. He bought a whiteboard, a bloody big bugger too. Who needs a massive whiteboard in their house? Apollo Creed, that’s who!

Anyway, as I walked towards the majestic auditorium, it slowly dawned on me that this was a far bigger deal than Ricky’s little Soho preview show; this was an Academy theatre in Hollywood. I slipped in under my friend’s name and made my way past two security checks and into the theatre.

Inside the auditorium were literally hundreds of seats and the venue was at least three-quarters full already with Hollywood movers and shakers. Plus, of course me – an absolute fraud in a canary yellow shirt carrying a faux-leather binder. It suddenly became quite clear there was no way I was going to meet Ricky in the bar after this screening; this was way too big an event. Then I remembered – where there’s a Q, there’s an A.

If I wanted to speak to Ricky, I was going to have to stand up in front of a full auditorium of people and ask my question. I hadn’t ‘pitched’ to anyone before, yet here I was, mentally debating whether to do it on a microphone in front of a room full of Academy members. That’s when the cold sweats kicked in.

Conan O’Brien was hosting proceedings and he welcomed Ricky on stage to rapturous applause. By now my mind had gone into overdrive. I had come all the way to LA for a moment like this, but did I have the bottle to get up there and pitch it in front of an audience? I wasn’t even really supposed to be in there.

I spent the entire screening of Derek racking my brain over what to say. You definitely don’t pitch at an Academy Q&A, but desperate times call for desperate measures. As David Brent said, ‘I’m not used to public squeaking, I piss-pronunciate a lot of my worms.’ So I gathered my thoughts, took a deep breath and waited for my chance to speak.

Standing in the queue to ask a ‘question’ was one of the most nerve-racking moments of my life. I was the last person in line and the guy before rambled on so much that Gervais and O’Brien thought he was some ill-advised comedian doing a skit. It turned out he was just a nutter who needed a piss. Even more sweat was added to my brow as he wittered on about wishing he’d gone to the toilet first. You and me both, buddy.

After this strange interlude killed the vibe in the room, it was my turn to ask a question. I gripped the mic in my quivering hand and explained to Ricky that I had seen him perform the first ever preview of ‘Animals’ in London 12 years earlier. As only 100 other people in the world could say this, I thought it might break the ice early doors before I dropped the bomb.

I then asked how he felt about Office-based quotes becoming part of people’s normal, everyday vernacular. I pointed out that my friends and I can have full conversations using nothing but lines from The Office and that there was even a ‘Tinder like Brent’ Twitter account showcasing people who try to get dates using only quotes from the show.

He seemed pretty pleased, so I asked what he thought of a comedy character whose only dialogue would be quotes from The Office. These would sit perfectly within the script, meaning only true Office-heads would recognise the references, while the untrained ear would just hear normal lines of dialogue.

Gervais mused, then said he thought it was a very clever idea – though he would need to see the script, as would his lawyers. Having snared my catch, I pointed out that I had actually written this character into my show The Grass is Always Greener and I had the script with me if he wanted to have a look.

The collective groans across the auditorium made me feel very self-conscious, as it dawned on the Academy audience that I’d just pitched Ricky right under their noses. I quickly sat down, mopped the sweat from my brow and hoped I could deposit the script after the Q&A had finished.

After the show, I patiently waited in the wings while almost every member of the audience had their photo taken with Ricky. Unfortunately, as I went in for the kill I saw his agent point at her watch and begin to pull him away. It didn’t feel right to force my script onto him there and then, but after what he had said I would certainly be contacting his representation the next day to discuss our conversation. It’s not like I didn’t have any witnesses.

I left the auditorium feeling a mixture of relief and renewed vigour that I had pulled off something of a coup. If I hadn’t stood up and grabbed the microphone, I would never have forgiven myself. This was what I was here for; I guess taking risks is the name of the game in La-La Land.

I’m not sure whether it was the hideous yellow shirt or the fact I shamelessly did what I did, but people seemed quite keen to speak to me after the show. A casting agent even made a point to seek me out, popping a business card in my top pocket and saying “That took some balls, kid. You could go a long way in this town.”

Had I just arrived? Was I on the first step of the Hollywood ladder? Well with Gervais’s (sort of) endorsement and a few new contacts made, I guess I was about to find out if I had what it took to swim with the sharks in Los Angeles.

Me and my faux-leather folder were ready to take on Tinseltown. Write that on your massive whiteboard, Apollo Creed!