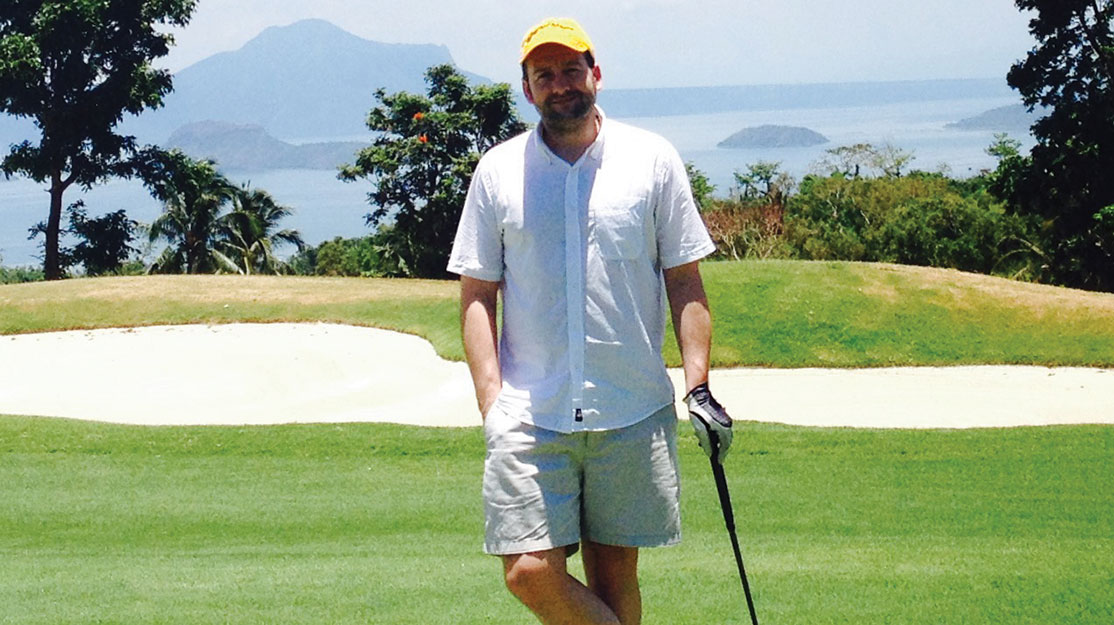 I boarded the Air China plane to the Philippines brimming with enthusiasm for the opportunities that lay ahead. A Hollywood producer had read my stuff and planned to meet me in the Pearl of the Orient, Manila.

My family contact had assured me many great things were in the offing, with the chance to help turn a published novel into a screenplay during my time in the Philippines. I was to stay on a pristine golf course in Tagaytay, a popular holiday town just south of Manila. Had I finally hit the jackpot?

Unbeknown to me, Tagaytay is in the middle of absolutely nowhere. The house was near a golf course, which also happened to be at the bottom of a 45-degree-incline hill, with nothing around for miles.

Thankfully there were a couple of live-in cooks, though the only cuisine that appeared to be available was deep-fried everything. The pungent aroma of frying fish heads awoke me every morning, leaving me with no other decision than to live on a rudimentary diet of ready-salted Pringles. I’d lived this culinary dream previously while travelling across Bolivia. When in doubt, eat things that are foil-wrapped.

I was informed the book I was about to adapt into a screenplay was part of a trilogy, and asked if I’d mind taking the best parts of all three books and turning them into one movie. Now, if I like a novel I can power through it in a couple of days, with a big smile on my face too. Unfortunately, this bad boy was like pulling teeth. I agreed to carry on for the sake of the project – plus, of course, the imminent arrival of Mr Hollywood.

For almost a week, I read page after page of absolute drivel, the likes of which I hope never to suffer again. After finally ploughing through all three books, I started the process of trying to decipher some kind of worthwhile story to impress the incoming film producer. I voiced my concerns incessantly but the more I begged for mercy, the more I realised the only people that had read this dross were me and the bloke who wrote it.

As the grammatically deficient tomes and Pringle dust began to melt away my brain, a call finally came through from Mr Hollywood. He was going to arrive in five days’ time – but I had a flight booked home in three. It began to dawn on me that I’d basically paid out of my own pocket to fly to the other side of the world and read three rubbish books.

I headed back to England with the same old doubts creeping in. Namely, what the fuck was I doing with my life? I’d hit a brick wall with my original script, The Grass is Always Greener, but I was adamant that I had to see this journey through to its quite possibly bitter end. I was a good writer. Or was I?

Either way, I headed back to the US to have another crack at the big time. Or the small time. Just someone give me some kind of time!

Upon landing back in the States, I decided to keep things simple and start a completely new project – a short film, the idea for which I came up with 15 years earlier while waiting for a train at Kensal Rise station in London. I hadn’t even considered becoming a writer at that time, but it reappeared in my memory as I brainstormed for new story ideas. The plot was very simple, with a real cliffhanger ending. Maybe a short film was the way forward for my fledgling writing career. I mean, how hard can it be to write 10 pages?

I created the basic structure and script quite quickly and sent it out to a few friends to read. The feedback was good, with very few people seeing the ending coming, which was very important to me.

I then got a call from a mate in Venice Beach, wondering if I fancied heading over for a few days to catch up, hit the tennis courts and sink a few suds. Ladies and gentleman, allow me to introduce you to a certain Stuart Rush, who suddenly became intrinsically linked to this whole tale.

‘Rushy’ was an old face from my hometown of Northampton, England, with whom I had lost contact about 10 years earlier when he moved to Australia. On my first trip to LA two years ago, I was sitting having a coffee on Rose Avenue in Venice when he cycled past and heard me. That’s right, after a decade of no contact, he heard my voice and instantly recognised the owner. Now, I’m the first to admit that I have a very distinctive nasally twang to my voice – it has been likened to a dog whistle after a few beers – but I was still somewhat dumbfounded when his human ear picked up my ultrasonic canine signal.

Fast-forward to the present day and I eagerly accepted his invitation for a few days on Venice Beach. What he kindly forgot to mention was that he was moving house that weekend, cleverly securing the services of my very unwilling pair of hands. I didn’t really have much choice in the matter, but many people have helped me move house over the years and he was a mate. Plus, annoyingly, I secretly applauded his cunning.

What he also forgot to mention was that on moving day, he wasn’t ‘going to be around,’ leaving me in the house with another ‘removal victim’ who worked behind the bar at The Ale House on Venice boardwalk. We looked at each other and nodded, then went about business of two downtrodden men helping a massive hoarder move out of his apartment full of crap. I’ve seriously never seen so much shit in my entire life.

After a few hours, our predisposed host sent round a pizza for the men at work. Was it an apology? I’d like to think so. We sat down and got chatting, and it turned out my removal buddy, Kayde McMullen, was an actor. In LA, of all the places, who would ever believe that?

I told him about my short film idea over a flat Pepsi and he seemed to really like it. So much so, he showed me a few of the shorts he had been making with some friends in LA. I had a look at one of them, Dying’s the Easy Part, over a greasy slice of pepperoni and was thoroughly impressed. Shot on the fly, it made it clear these guys had talent and were very interested in the darker side of cinema, as am I.

After finishing the move from hell, we met up the next evening with Kayde’s cameraman and, after a few beers, agreed to push forward as a team to try to put my story onto celluloid. I rewrote the screenplay more times than I care to remember, but it really felt like we were on to something interesting and original.

After I’d honed the script to within an inch of its life, Kayde suggested we show it to a close friend of his who had previously worked in the industry as an actor and had appeared in pictures such as Little Miss Sunshine and The Aviator. He was now working behind the camera as a writer and director, with recent projects featuring esteemed actors like Richard Dreyfuss and Don Johnson. I didn’t expect too much from the meeting, after all, who was I? But, of course, I was totally open to any experienced Hollywood advice.

I was totally surprised to find out Kayde’s pal not only really liked my idea, but also wanted to direct the short and come out of acting retirement to play a major part in the production.

I’d gone from flying to the Philippines to eat crisps and read rubbish books to writing a short film and picking up an experienced Hollywood writer and director in just a few short months. All of this stemmed from the fact that an old mate from my hometown had heard my voice for the first time in a decade and tricked me into moving house for him.

They say some things in life are fate, simply written in the stars. I believe you make your own luck by putting yourself into certain positions. I made a choice two years ago to find something new, something exciting. Now I was back in LA, and this time I really meant business. I had a new film project that was picking up heat and I was buzzing.

Then, by chance, I made a new acquaintance. An acquaintance who was about to become my Hollywood agent…

For previous instalments of Hollywood or Bust, click here.