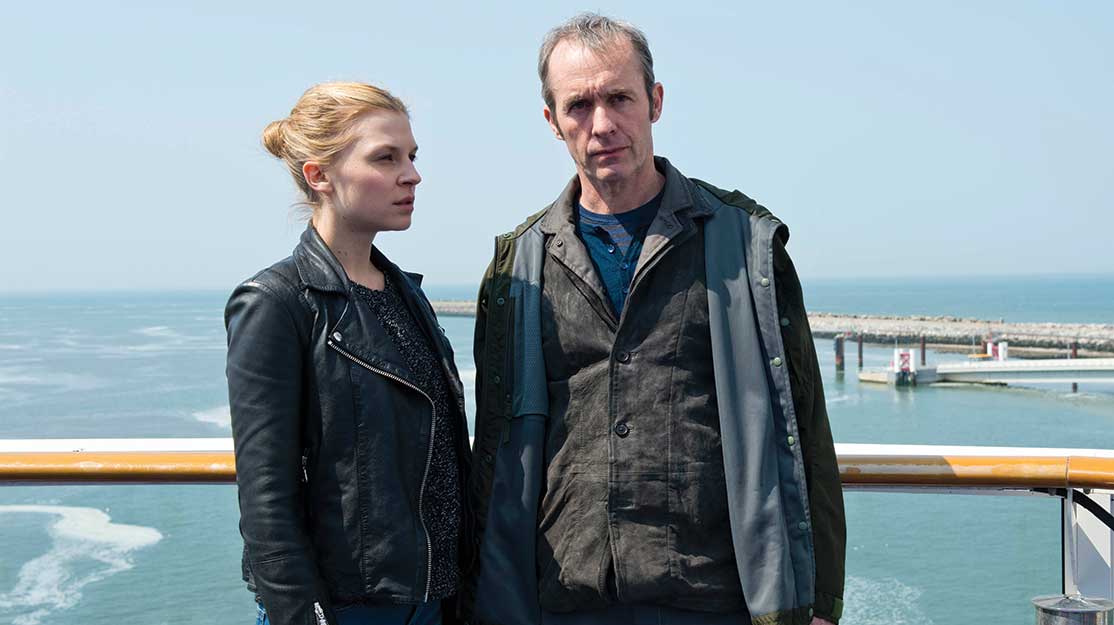 From talking the talk to walking the walk, UK pay TV broadcaster Sky has put its money where its mouth is in the search for compelling original drama.

Now that money is being seen on screen in the guise of an enviable slate of original series, including You, Me and the Apocalypse, The Last Panthers and Fungus the Bogeyman, which aired over Christmas. New series coming up include The Five, created by crime author Harlan Coben, and second seasons of The Tunnel (pictured above) and Fortitude.

And as Sky moves into a new era of year-round drama commissioning across three channels – Sky1, Sky Atlantic and Sky Arts – there is only the promise of more to come.

“We are a pay TV platform so we have a mandate from our CEO to make sure we can provide drama that people want to pay for,” says Sky head of drama Anne Mensah. “What’s brilliant about that relationship with our customers is that it’s a mandate for distinction. Everything we do is about being the boldest, the most distinctive, the most innovative drama in the UK, specifically for our customers. We have one drama after another and they all have that ambition to be absolutely best in class, but also good fun and really watchable.”

Sky is best known for its acquisition of rights, predominantly for sport, movies and US television – in particular series from HBO. Last month, Sky tied up exclusive UK rights to content from Showtime, which will include Billions and the revival of Twin Peaks.

And Mensah compares Sky’s original drama ambitions to that of the film business: “We look at television like movies. In the same way you’re working really hard to get an audience to get out of their chair and go to the cinema and buy a ticket, you buy a ticket for Sky. We treat our customers in the same way, with the same production values, the same stars and the same sense of event.

Cameron Roach, Sky’s drama commissioning editor, takes the identities of Sky’s channels further by describing them in terms of how viewers watch them.

“On Sky1 we want to promote shared viewing in households, whereas Sky Atlantic is not about the overnights and is much more like reading a novel – you might watch two or three episodes at once,” he explains. “The on-demand platform (Sky Go) is really important for that viewing experience.”

But when viewers are watching Sky’s output in a variety of ways, how does the broadcaster measure success? Mensah says it’s about what the programme makers wanted their show to achieve in the first place.

“Some shows are built to be consumed like novels, to be massive critical successes and to talk to an audience that want to get into real think-pieces. Others are built to be super entertaining,” she says. “Everybody’s obsession with how you measure success is totally reductive because every show does something different. Particularly when you’ve got a pay TV platform – on a basic level our jobs are to bring people to Sky and keep them at Sky, and to give them a good experience of being Sky customers. That’s not one show, that’s the whole offering.”

As far as development goes, Sky doesn’t have a number of projects waiting in the wings. Instead, its drama team puts its money only on shows that are likely to make it to air, rather than taking scripts on and passing on them further down the line.

Mensah notes: “If we know we want to do a show, we think we shouldn’t put other things into competition with it. I would hope the talent comes to work with us and knows we’re backing their show and not slightly playing the odds like some other channels can do. It can be quite hard to get stuff into development with us, but once we’re in development with something, we’re doing it because we intend to make it.”

Roach adds that Sky’s drama team turns down lots of projects. “Before I started working with Anne, she said her ambition was to run a narrow slate,” he says. “Lots of people say that but it is genuine. We’re a small team but if something is in funded development with us, that means one of the team absolutely loves it. We’ve all got different tastes so it’s not necessarily everyone’s cup of tea, but we have an absolute ambition to see that show made and we will support that production company.”

Funding from the pay TV broadcaster is also dependent on the type of project in question. With its use of CGI, Fungus the Bogeyman required extensive research and development, while horror story The Enfield Haunting also required commitments in terms of research and script development.

Both Sky Italia and Sky Deutschland have retained their own drama teams, however, with forthcoming series The Young Pope, starring Jude Law, offering the first example of how the trio will work together.

“The Young Pope is a coproduction through all three but editorially it goes through Sky Italia, because what you don’t need is 7,000 voices on something,” Mensah says. “There’s one editorial voice but the backing of the whole weight of Sky. The Last Panthers was simultaneously transmitted across all of our territories, as was Fortitude. What you’ve got is the best of all possible worlds, which is clear editorial focus but with the weight of this massive company backing your show.”

Sky is also a committed coproduction partner, working with NBC on end-of-the-world drama You, Me and the Apocalypse, Showtime on horror Penny Dreadful and France’s Canal+ on cross-Channel drama The Tunnel and pan-European crime thriller The Last Panthers.

“We love coproductions but luckily with Sky, it’s not about the money as much as creativity. Working with Canal+, not only do we like them personally but they also brought creative talent to us that we couldn’t find ourselves. I’d never worked with Haut et Court (Les Revenants) before Panthers. The Warp Films-Haut et Court partnership is why Panthers is so unique. As for The Tunnel, we had worked with Kudos before but working in France with French directors was new to me.”

Looking ahead, Roach says The Five is a good example of how Sky wants to take an existing genre – crime, in this case – and give it a different hook for Sky1.

The show follows a group of four friends haunted by the disappearance of one of
their younger brothers some years earlier while he was in their care. The group is forced to revisit the past when the missing boy’s DNA turns up at the scene of a murder. It is written by Harlan Coben and Danny Brocklehurst and produced by Nicola Shindler’s Red Production Company.

“Anne and Nicola started talking about the hooky novels that come from the likes of Harlan Coben,” recalls Roach. “It was a really innovative development process and it was the same with Fungus and Lucky Man (now airing on Sky1), which was an original idea from (Marvel Comics’) Stan Lee.”

The prospect of year-round drama also looks set to create a new story for Sky’s channels, with their individual identities no longer being separated by strict boundaries.

“There has to be fluid boundaries between the channels, particularly as we’re aware of the growing importance of our on-demand offering,” says Roach. “We’re planning two or three years in advance and we’re not sure how platforms will emerge. Sky1 and Sky Atlantic have a very clear identity but as we go to year-round drama we can diversify our output.”

Mensah says anyone hoping to pitch a project to Sky should simply talk to her and her team. “A pitch should feel like a conversation,” she explains. “Too often people put too much emphasis on the formal pitch – anything we’ve got in funded development began as a conversation. People can over-think that process. We’re working with Graham Moore, who wrote The Imitation Game, and he simply called us. We bought the idea on the phone. He then won an Oscar. Equally, other people send us full scripts. There are seriously no rules.”

No rules, then, but if one were to offer potential partners some guidelines, it would be to avoid generalised stories and to throw caution to the wind in a bid to offer big, bold, epic tales.

“If you’re lucky enough to be a commissioner, when everybody else turns right, you should turn left,” says Mensah. “With The Five, everyone else was doing lovely, languid thrillers so we thought, ‘how can we do it as quickly as possible?’ It turns on a dime every five seconds and the producers have done such a good job.”

Ultimately, to have a drama land on Sky, you’ve got to reach for the stars. “If you feel a show could sit on ITV or the BBC, they’re brilliant so that’s the space it should be in,” Mensah adds. “We really do look for stuff that feels like it could only be us.”

tagged in: Anne Mensah, Cameron Roach, Fortitude, Fungus the Bogeyman, Jeremy Darroch, Lucky Man, Showtime, Sky, Sky Atlantic, The Five, The Last Panthers, The Tunnel, The Young Pope, You Me and the Apocalypse