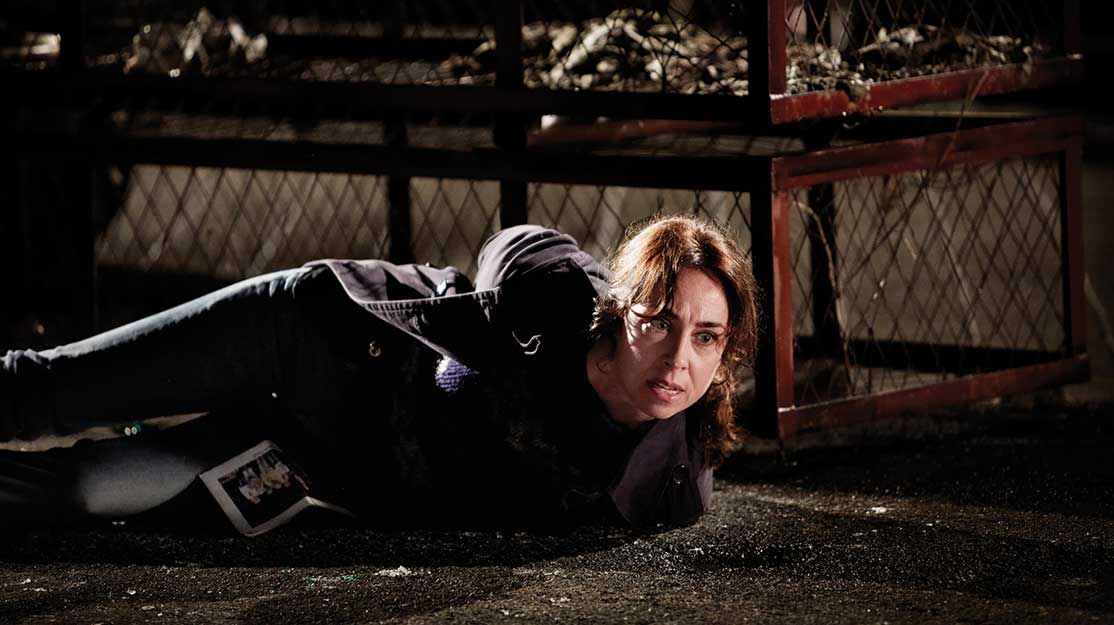 What makes Denmark’s DR so successful when it comes to drama? DQ hears from its drama boss and examines two of its lesser-known series.

But how did this network become one of the biggest signatures for quality drama in international television, and what is the secret to its success?

“For me, it started with the theatre,” reveals DR’s respected head of drama Piv Bernth. “I was a stage director for five or six years before a colleague of mine went to DR and brought me over. For a while I directed theatre and TV and then another colleague at DR asked me to come and work there as a producer.

“As a director, I had complained a lot about working conditions, so he said, ‘Why not come over and do something about it instead of bouncing off the problem from the outside?’ So I signed up with DR on a three-year contract.”

After a couple of productions in the late 1990s, Bernth’s first big breakthrough was the comedy Nikolai and Julia. Written by Soren Sveistrup, it won an International Emmy.

“Then Soren talked to me about an idea he had for a 90-minute movie,” she recalls. “I said to him that it felt like it should be a longer story, so he went away and worked on it for a few months. He came back with a concept that would eventually grow into The Killing.”

Also crucial in developing The Killing (known locally as Forbrydelsen, which ran for three seasons) was lead actress Sophie Grabol’s involvement. “Sophie had been the lead in Nikolai and Julia and was used to playing talkative, emotional women,” says Bernth. “At first she wasn’t interested in The Killing because she was expecting a baby. But after giving birth she read the script and agreed to do it. She played a big part in the development of her character and the show.”

The Killing was the series that got DR noticed internationally. For this, Bernth expresses gratitude to BBC head of acquisitions Sue Deeks: “Sue saw season two of the show by accident and immediately wanted to see season one. The BBC buying it was a turning point and it went on to do well across Europe.”

The Killing was unusual because it told the story of a single murder across 20 episodes. “People said we were crazy at the beginning,” admits Bernth. “But it started with something a policeman said to us – which is that if you don’t get the killer in the first three weeks, your chance of doing so gets much lower. So this was about solving the case in 20 days. But it was also about the other storylines running throughout the series.”

The carefully controlled pacing of The Killing is something that now stands out as a hallmark of Nordic drama. “The Americans are more impatient than we are,” Bernth says. “It takes them 24 hours to save the world, whereas it took us 20 days to catch a killer – that’s the difference.”

In hindsight, Bernth believes part of the show’s appeal was that it presented an unexpected side of Denmark: “It showed Denmark as a country with a dark side, which took people by surprise because they were used to us all smiling and being friendly. I also think the look of the landscape appeals to people. In The Killing it is Copenhagen, but in another of our shows, The Legacy, it’s more about the countryside.”

Bernth says the production process at DR has a lot to do with the success of shows like The Killing. “We have an advantage in the fact that DR is a public broadcaster, so we have a large part of our budget in place very early, which makes it easier for us to plan years ahead. We also have our own in-house facilities, which means we can make our budget go further.” DR dramas typically come in at about €1m (US$1.1m) per episode.

In terms of individual shows, “the ideas come from the writers who are then teamed with producers,” Bernth explains. “This isn’t so much about talent as chemistry – the two really have to want to do something together. Recently, we’ve looked at other ways of doing things because we don’t want to be in a situation where this becomes a routine we can never get away from. But we do always try to keep to the central idea of one vision.”

Supporting show development is the team at DR Fiktion, Bernth’s department. “All of our producers meet every Wednesday from 09.00 to 11.00 and we talk about everything,” Bernth explains. “It’s important they are all free to discuss any issue. At the same time, they are all there for each other during the week. If they want someone to come and look at a sequence in the edit suite and give them advice, they are always able to do so. That collaboration is very special and it’s the kind of environment we also encourage between the writers. The writers are very important to us. Without them, we have nowhere to go.”

The success of The Killing and The Bridge has led some to pigeonhole DR as a Nordic noir producer – though Bernth prefers to place the primary credit for The Bridge with DR’s Swedish partner, SVT. She says the reality is that DR is backing a much wider range of shows: “Everyone is doing crime. There’s a lot of good crime, so we are looking the other way.”

There is The Legacy, for example, and Follow the Money, which has been sold to the BBC. And now DR is working with Borgen creator Adam Price on a show called Rides Upon the Storm. “This is about the impact faith and religion have on our lives,” Bernth says. “It’s about a family of priests and it asks questions like what if you lose faith – how do you get it back?”

Bernth makes no excuses for the tough subjects DR chooses, adding that she is grateful to the channel’s higher authorities for backing her department’s judgement. “We want to tell complicated stories in an accessible way,” she notes.

“My ambition is for us to continue to be courageous in the themes we pick for our stories. So one area we are looking at is multiculturalism. If we do another crime series, it won’t just be a crime story.”

That, says Bernth, is the way it should be for a public broadcaster. “The commercial broadcasters have to be safe, so it is our job to take on the complicated stuff. We try to give the audience what they want – but challenge them as well.” 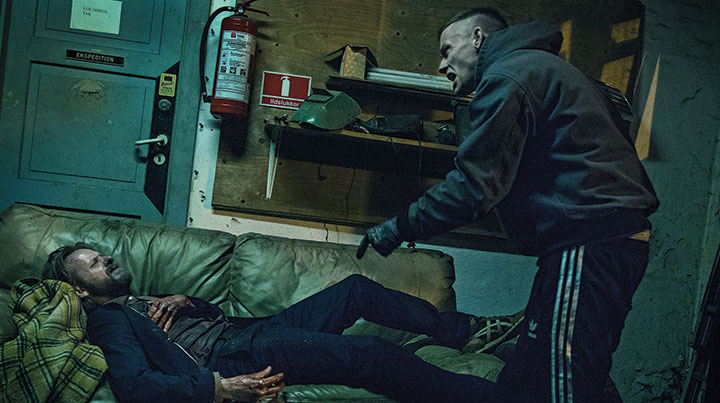 Follow the Money (aka Bedrag) recently aired on DR and achieved strong ratings, debuting to 1.3 million viewers in January this year and adding a further 150,000 for episode two. It has since sold to broadcasters including the BBC.

Explaining the genesis of the financial crime series, creator and writer Jeppe Gjervig Gram says: “When the financial crisis hit the Western world in 2008/2009, I found it frightening but fascinating. As a writer, I didn’t see it coming and realised how terribly important it is to understand big finance.

“I thought everyone would do a series about financial crime but nobody did. So after I finished working on (DR’s hit political drama) Borgen, I started Follow the Money and it is still one of the only shows on the subject.”

Gram says the idea was to “construct a story about the whole of society. So we have the big money of the upper class, the middle-class cops and the working-class underdogs who stumble upon some money that belongs to the bad guys.”

Producer Anders Toft Andersen says the challenge was to turn a complex theoretical construct into something definite. “We made everything as physical as possible and very specific,” he explains. “We also knew from the get-go we had to make it a story about greed and how it takes many shapes. It might be the desire for money and material goods, but it could also be the search for the perfect life.”

Gram echoes this sentiment: “We used greed like a fixed point when telling the story. A lot of people looked the other way and didn’t ask questions about why their house rose in value – instead asking, ‘Who did this to us?’ The way we dealt with greed was that something done out of necessity was not greed. Greed was about characters always wanting a little more.” 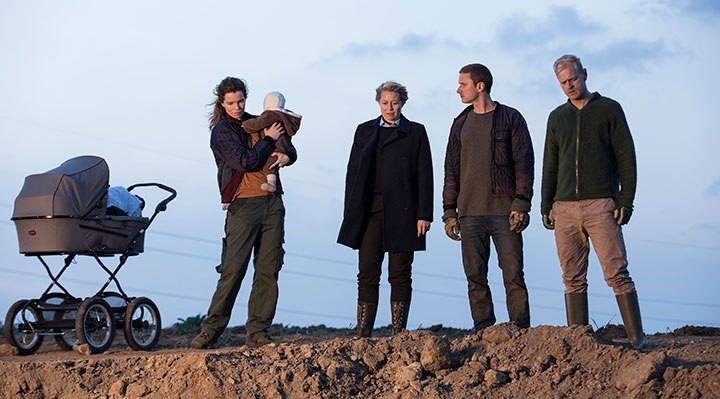 The Legacy (aka Arvingerne) is a relationship drama about four siblings who come together to sort through their famous hippy artist mother’s possessions after her death.

The process becomes the focal point of their relationships with each other and leads to a re-evaluation of their feelings towards their parents. As such, The Legacy of the title is not just what they have been left, but how, as adults, they process their feelings about their childhoods.

The show is an evolution from the usual producer-writer relationship found behind DR dramas in that it also involved a third participant, production designer Mia Stensgaard.

Producer Karoline Leth says: “The production design was central to how we scripted the show. The props (mainly works of art left behind by the deceased mother) represent the mother.”

Stensgaard says this meant she had to have a close ongoing dialogue with writer/creator Maya Ilsøe: “It would start with me interviewing Maya about what is going to happen and how we could integrate people through art. And we’d look at how the props could make the dead mother live forever.”

Ilsøe says the actors also played an important part in the development process: “We work with the actors early in the story and if they tell us a character would not do something, we adjust it. Everything has to be very specific to each character. We can’t just have them sitting around the table.”

The way the creative team works on The Legacy was completely new, says Ilsøe, “so it was very stumbling at first. But now we have a system for working as an ensemble.”

The show, which is about to enter its third season, addresses tough family issues – including the fact that one of the siblings had been given away by the parents as a child.

Ilsøe calls it “a psychological drama where, through the rooms, the props and the ghost of Veronica (the mother), the siblings’ childhood is everywhere. They are people struggling with their histories.”

She stresses that The Legacy is not easy to pigeonhole, with light and dark elements driving the story forward. DR head of drama Piv Bernth says this is one of the things she likes most about the show: “The complexity of character in this series is amazing. One minute you think ‘she’s crazy’ and then you think the opposite. That’s wonderful. It’s a story that asks how you create a family when you have no role models of your own.”

In terms of oversight, Bernth says: “I read the scripts, but I trust these guys. That is how you get creativity and innovation.”

Ilsøe adds: “Trust is essential. It gives the calmness and freedom to develop the language the way we think it should be.”

tagged in: Borgen, DR, Follow The Money, Piv Bernth, The Bridge, The Killing, The Legacy