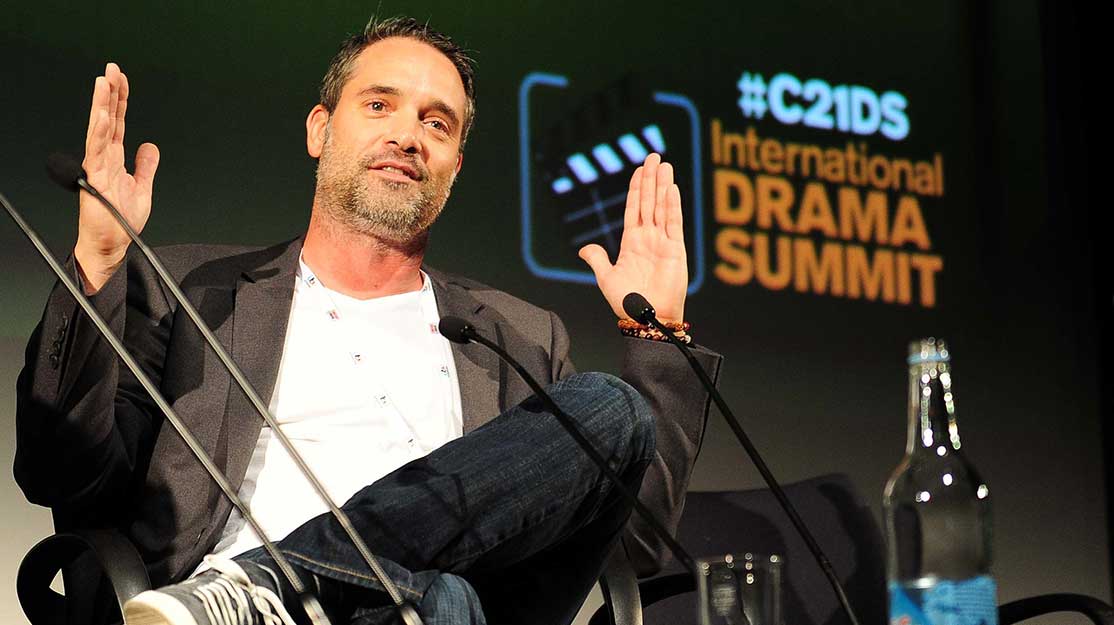 On the south bank of the River Thames, hundreds of producers, writers and broadcasters from around the world gathered in London for C21 Media’s International Drama Summit this week.

Held at the British Film Institute, the event took in three days of screenings, panel sessions and interviews covering the hottest talking points in the business – from budgets and coproductions to what commissioners are looking for to fill their schedules.

Bradley also spoke about his positive experience working in a US-style writers room for the first time. “It’s always going to be true that if you have four rather than one brain that you will create more,” he said. “The turnaround was always going to be very quick because you’ve got at least eight months to do 10 episodes.”

There was also a packed house for a first glimpse at ITV’s forthcoming period drama Victoria, starring former Doctor Who companion Jenna Coleman. “Jenna was born to be queen,” said Damien Timmer, from producer Mammoth Screen.

Writer Daisy Goodwin added: “I’ve tried to tell the story of a teenager growing up with a crown. She’s not the queen you expect. It’s drama but everything that happens is true.”

Among the drama case studies, the creative teams from shows including Agatha Christie’s And Then There Were None, The Collection, Dickensian, Beowulf: Return to the Shieldlands, Capital and Jekyll & Hyde took to the stage to reveal secrets from behind the scenes.

Agatha Christie Ltd CEO Hilary Strong said she always envisioned And Then There Were None to be a coproduction, with the three-parter due to air on BBC1 in the UK and Lifetime in the US.

“Working with Joel [Denton, A+E Networks ] and A+E has been a real revelation. This is a BBC show, it’s inherently British, but A+E didn’t demand we put any US stars in as per the old coproduction thing. That is over. Instead, we knew it needed a cast that resonated [in the US] so there was a dialogue.”

And while there was plenty of talk about the alleged saturation of the TV drama market, it was clear that many executives simply believe that while there might be too many shows, there aren’t enough great shows.

Morgan Wandell (pictured top), head of drama series for Amazon Studios, said as much during his keynote session when he warned producers against making run-of-the-mill, “industrial grade” procedurals.

He told delegates that Amazon Studios is aiming to make shows that are a “step above” what is already on offer, such as the SVoD platform’s recently launched The Man in the High Castle.

“If you’re making industrial-grade procedurals then good luck, but you do run the risk of being washed out,” he said, adding that some producers and writers “have built up specific muscles in TV. We’ve stripped away narrative tropes they relied on.”

Hard Sun, which will air in 2017 and is produced by Euston Films, follows detectives Elaine Renko and Robert Hicks, partners and enemies, who seek to protect their loved ones and enforce the law in a world slipping closer to certain destruction.

Hill told the Drama Summit that the success of the BBC’s recent drama slate, including Sherlock and Happy Valley, was evidence that “mainstream is really moving and big audiences will watch really complex, tricky subjects.”

Sky head of drama Anne Mensah and drama commissioning editor Cameron Roach described the differences between the networks they look after. Watching Sky Atlantic was compared to buying a ticket for a blockbuster film, while Sky Arts was likened to an art house cinema – though not for niche storytelling.

The pair said story was key across the board, however, adding that the pay TV broadcaster’s development team is now commissioning year-round for all three networks, including Sky1, and that channel boundaries remain fluid depending on the project.

ITV director of drama Steve November was more specific when describing his channel’s needs for the next two years. With shows such as Victoria and Jericho coming up in 2016, the broadcaster is well placed to retain viewers following the end of long-running hit Downton Abbey, which concludes with a Christmas special later this month.

And while ITV remains keen on period dramas – with Dark Angel and Doctor Thorne also coming up next year – November said he was looking for a range of new contemporary dramas to fill the 21.00 slot.

“I have got to be honest, I watched [the BBC’s] Dr Foster with a degree of envy and I wish we had that show,” he said. “Big romantic thrillers and a family relationship drama are real priorities for us.”

Channel 4 drama team Piers Wenger and Beth Willis also talked about the challenge of building a year-round drama slate, and how they approach traditional genres such as crime, period and sci-fi in a fresh way (see No Offence, Indian Summers and Humans respectively).

Deputy head of drama Willis said: “If it could be on another channel, we shouldn’t be doing it. We’re always looking for shows with an edge.”

Wenger, C4’s head of drama, revealed there are a variety of funding models in play at the broadcaster, such as its international coproduction strategy that saw Humans produced with US cable channel AMC.

As the conference drew to a close, the challenges of the future came into view – keeping viewers tuning into linear broadcasts, judging success in ways other than overnight ratings, piecing together financing in a world where there are no longer any set models for production and finding ways to tell new stories in an increasingly competitive market.

There will never be a formula for creating a hit series, but the ambition to find the next big hit is continuing to drive the business forward in new and innovative ways, ensuring the appetite for television drama will remain undiminished for some time to come.