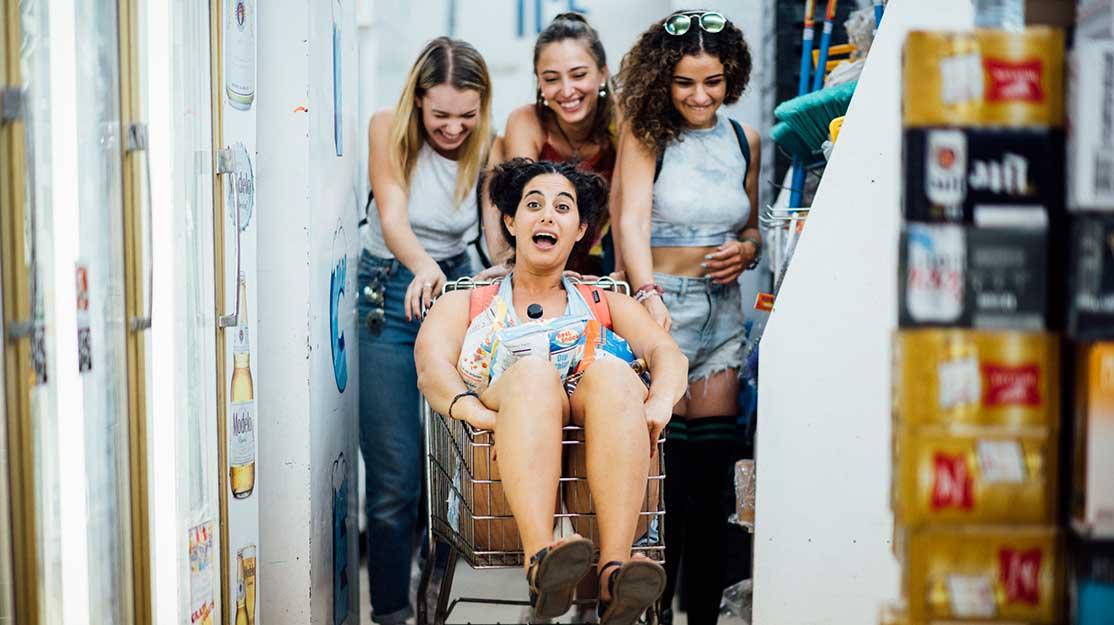 Web series The Skinny tackles dramatic subjects like eating disorders with a heavy dose of comedy. As part of DQ’s Digital Drama Season, filmmaker Jessie Kahnweiler explains why budget remains the only separator between online and TV drama.

Eating disorders might not be the first topic that springs to mind for a new comedy, but it’s the dramatic nature of the subject at the heart of web series The Skinny that makes it stand out from the online crowd.

A 2016 Webby Award winner, The Skinny sees writer/director Jessie Kahnweiler play a fictionalised version of herself as wannabe YouTube star Jessie, who attempts to face up to and overcome bulimia – an illness Kahnweiler herself has struggled with.

“The Skinny is about our desire to avoid discomfort,” Kahnweiler tells DQ from her parents’ home in Atlanta, Georgia. “In season one we’re watching what effect that has on your life. You cause yourself a world of pain to try to avoid discomfort so we’re setting up those seeds and [examining] how those issues become a security blanket. We’re just setting up this rollercoaster ride of insanity and a lot of fun.

“My goal for the first season was to create a character who has a problem but has an amazing life and sex and dreams. We’re all like that. We all have so much stuff that’s horrifying and amazing, we’re not one-dimensional.”

Kahnweiler is no stranger to filmmaking. She has her own YouTube channel filled with videos such as Jessie Gets Arrested and Meet My Rapist.

And for her next project, she wanted to confront her experiences of bulimia by putting a humorous spin on a very personal story.

“Looking back, everything came together really organically, even though at the time it felt like a fucking mess. It felt like a hurricane,” Kahnweiler says of The Skinny’s origins.

After failing to find success in shopping the pilot she had written, the comedian decided to let the camera do the talking and film it herself.

“Whenever I have an idea, people are like, ‘That sounds like the worst idea ever,’” she declares. “My pitches often leave people crying in the room horrified. I did a comedy about sexual assault. So people were like, ‘Bulimic comedy? Absolutely not. That will never work.’”

Kahnweiler grouped together some friends to make a half-hour spec pilot that landed in the hands of Jill Soloway, the creator of Amazon’s award-winning Transparent, who suggested some editing work to get it into shape. The resultant promo, paid for via a successful Kickstarter campaign, was watched by staff at style website Refinery 29, which ended up picking up a six-part series.

“Having Jill was really a turning point for me,” she admits. “Yes, it’s very personal but it’s not a documentary. When I first sat down and started working with her, she was like, ‘This isn’t therapy – this is not ‘hey world look at me’.’ This is creating something that everyone can identify with and that feels emotionally solid. The story really connects and you’re wondering what’s going to happen and you care about these people, so it’s not just this girl is puking. That is the difference between Transparent and a lot of shows – you actually give a shit, and it’s hard to make people give a shit.”

Kahnweiler confesses that the biggest thing she learned from the process is that she needs to be able to talk through stories and plot points when she writes, rather than writing in isolation. Soloway paired her with two associate producers from Transparent who would break down story with her and build episodes in a way that makes viewers want to continue watching after the credits roll.

“For me, it was so important to have people around me that really called me on my shit, because I think sometimes people can be so positive,” she notes. “Sometimes I could get really funny or really crazy, so it was great to have people around me – imagine a bunch of judgemental British people! I would yell and scream because you don’t want to write another draft but The Skinny wouldn’t have been what it is without those conversations. That’s what I learned – writing isn’t about sitting down at the typewriter and just having it all pour out. It’s really wrestling and struggling and it was kind of the moments that came out of those really hard conversations.”

With unrestricted freedom granted by Refinery, which encouraged Kahnweiler to always push the show harder and further, she admits she would impose her own limits to create boundaries for the series to live within. This included keeping a handle on the levels of nudity and swearing, to ensure the show was as accessible as possible to all audiences.

One note from Soloway also instructed her to focus on ‘bubble scenes,’ those “money shots” in each episode that drive the plot and the characters forward.

But how did she manage writing, directing and starring in her own web series? “I love it because I’m a masochistic control freak,” she jokes. “I love it because you’re writing throughout the process. Fifty percent of writing is done in the editing – I don’t think people realise that. It’s amazing how much is done in editing. So I find it, as a writer, really amazing to be able to be there.

“But the most helpful thing I found was locking those scripts. It might not be perfect, or you might not know if it’s going to work, but just being able to give yourself the grace of locking the script so then you can go on set and you’re not worried about rewriting. You can work those kinks out on set but I wouldn’t have been able to make it with directing and writing if I was still rewriting on set.”

However, the nature of the subject at hand meant Kahnweiler had to be frank and confess to her producers that this isn’t a story that could be neatly wrapped up at the end of its first season.

“The biggest challenge we had was convincing the producers and Refinery [that Jessie is] not going to get better in the first season. These kinds of things, you don’t wrap them up in six neat little episodes. It’s a long road.”

Though traditional television networks didn’t pick up her ideas first time around, Kahnweiler is now once again shopping The Skinny to broadcasters. But whether a linear channel or another online outlet picks up season two, the writer is in no doubt that web series and TV are crossing over and the boundaries are becoming increasingly blurry.

“Netflix has web series now and pretty soon you’ll turn on Netflix and there will be a 30-second episode,” she explains. “I think time is this revolutionary thing – it’s whatever the content, whatever the episodes want to be. There’s still a separation, mostly by budget, but there are all the opportunities in the world and there are no excuses not to be making your own content. I’m very grateful to be on this path.

“All these projects I’m working on, a couple of years ago people would have been like, ‘Absolutely fucking not, no way’ – and people still are, but you have to keep proving yourself. These are the stories I want to tell and only I can tell. The coolest thing about The Skinny is that the Kickstarter was funded by all these women with eating disorders. It’s amazing because it brings the conversation closer. Everyone’s talking to each other. You want to watch real shit? You want to make real shit? OK, let’s get to work!”

Focusing on the story for season two, “whether that’s on HBO or tampons.com, I don’t really care but it’s going to be out there for sure,” she adds. “I have a feature I’m working on and I’m working on two web series about fertility and women’s issues. I’m just taking all this collective trauma – sexual abuse, eating disorders, infertility – it’s a party!”