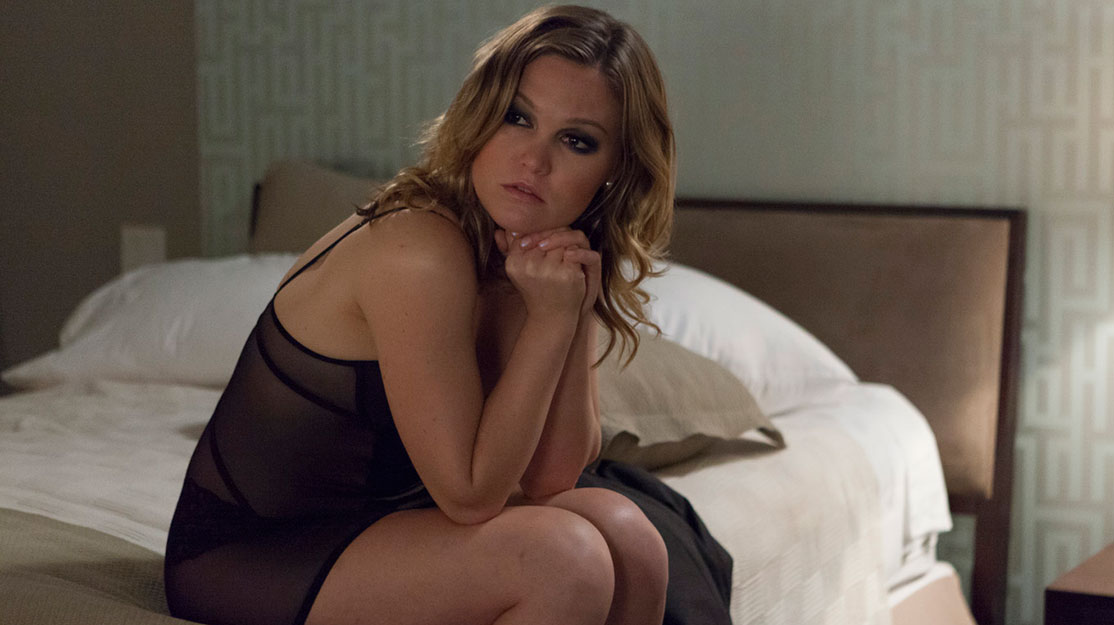 Shortform web drama Blue made its name as one of the first digital series to find a following online. In the first part of DQ’s Digital Drama Season, Michael Pickard speaks to writer/director Rodrigo Garcia about the show’s birth on YouTube and its journey to ‘traditional’ TV.

In today’s television landscape, the rise of catch-up services and binge-watching means more and more content is being pushed online. One series, however, is swimming against the tide, having made the opposite journey from YouTube to so-called ‘traditional’ television.

Blue began life in 2013 on WIGS, one of dozens of channels set up as part of the YouTube Original Channel Initiative that invested US$100m in fresh programming for the video-sharing platform. Starring Julia Stiles (above) as the titular character, Blue follows a single mother trying to keep her double life as a call girl a secret from all around her, including her 13-year-old son.

The series was one of a number of scripted and documentary shortform projects launched on the female-targeted channel, which was set up by Rodrigo Garcia, Jake Avnet and John Avnet.

“Back then – and we’re talking before iPads came out, so it feels like the Middle Ages now – there was this idea that if you were doing something for the internet, there was really no need to try to do it with quality,” Garcia says about their desire to create a high-spec online drama.

“But we thought, ‘Why can’t something be done that’s scripted and well produced, even if it’s in small instalments?’ The idea was to produce content that could eventually become part of a library and have a longer life and a longer way to jump from platform to platform.”

Garcia also wanted to shake up the general consensus that people didn’t watch drama online, so began work on a story that would be spread across 12 seven-minute episodes during its first season. A bulked up second season of 26 episodes followed.

Then when YouTube lifted its exclusive distribution deal, both seasons were picked up by Fox Broadcasting for its US SVoD service Hulu, which cut the short episodes together to make hour-long instalments. A third season, consisting of four 40- to 60-minute episodes, also debuted on Hulu in 2015.

Last year, FremantleMedia International picked up distribution rights and the series travelled to Lifetime in the UK. Then, earlier this year, the show was also acquired by Lifetime Movie Channel in the US, debuting last month under the new title Blue: A Secret Life.

Taking this online series to television hadn’t always been the plan, however. “It was always part of this YouTube channel,” Garcia explains. “Fox came in as a partner but it was always destined to be on that platform. Once the series did well, it had limited lives on Hulu and other platforms. Fremantle started distributing it around the world in a longer form, it aired on Lifetime UK and we re-edited it for Lifetime US.

“When we were writing season two and season three, we were still writing them in seven-minute instalments but we were always thinking, ‘Let’s keep in mind that they might come together, six might make a 42-minute broadcast hour.’ We were writing both for our platform and a potential future where the instalments could come together in one-hour episodes.”

Initially, writing seven-minute episodes – each with its own, beginning, middle and end – proved to be a tough proposition, especially with the possibility that further down the line they might fit neatly together into a standard hour of television. But from the outset, Garcia and his writing partner Karen Graci treated every seven minutes as if it were a regular episode.

“The fact it was seven minutes did not encourage us to treat it as a lark, to try to make it a funny moment in Blue’s life,” Garcia reveals. “We treated each episode like a longer episode, meaning it had an introduction, a twist, a turn, a reveal. There were cliffhangers at the end, even within the seven-minute form. That was a challenge.

“From the content point of view, being online gave us complete freedom. I didn’t want it to be like an NC17-rated series. I was very conscious and sensitive to the fact the lead was a woman and she had a secret life as an escort, which I really did not want to be exploitative. Obviously I have Julia as a terrific filter there. She would never do anything that seemed to exploit or degrade the character. But we had complete creative freedom – much, much more than we would have had on any other platform.”

However, the very nature of shortform online drama three years ago meant Garcia and his producing partners at Ingenious Media had a budget to match their limited running time.

“YouTube gave every channel its own budget and, within that, as long as we delivered the hours of content, they knew they could count on the quality we were hoping for,” he says. “A downside was our budgets were really tiny. We did literally hundreds of episodes, not just of Blue but the others, so there’s a lot of stuff that amortised with production. Each one of our seven minutes was somewhere in the $30-60,000 range, depending on the episode. But, you know, it’s tough.”

Key to the success of Blue, both online and later on television, was casting Stiles (10 Things I Hate About You, the Jason Bourne franchise) in the central role, alongside fellow cast members including Uriah Shelton, Sarah Paulson, Eric Stoltz, Kathleen Quinlan, James Morrison and Carla Gallo.

“When we did our first season for WIGS, it was a very good time because everyone knew the web was here to stay,” Garcia recalls. “Everyone was quite open to experimenting on it. Our initial group of Blue episodes was 12 seven-minute episodes, and Julia was always someone I wanted to work with. She was very open to it. Back then, it was a short commitment. She liked the material – of course, that has to always come first – and she was willing to say, ‘OK, let’s do something that’s quality for the internet and let’s see where it goes.’”

Unlike broadcast television shows that sign actors up to long-term contracts, Blue’s shortform nature meant it presented a friendly commitment to Stiles and her co-stars.

Garcia continues: “Julia was happy with the results [of season one] so she came on board [season two] and, in fact, she wrote and directed another series for our channel, called Paloma. It was all very much based on interest and availability, and you’re always encouraged by a good reception. The series was very well reviewed and it attracted a lot of attention just for its production values and the performances, so that encouraged her to stay.

“It was a time when people were willing to experiment. If you’re making a digital series now, actors will be asking if it’s on Netflix or Amazon. The budgets have become bigger. Julia, like all good actors, is always going to be interested in good material. It was great moment to be experimenting.”

Now the experiment is over and online platforms boasting shows such as Transparent and Orange is the New Black have turned the entire TV industry upside down as broadcasters scramble to catch up with their digital competitors.

But Garcia sees Blue’s transformation into a ‘traditional’ TV programme as an added bonus stemming from the show’s success in an era when quality content will always find an audience.

“A few years ago, if someone said there would be a quality series on Amazon, you would have found it laughable,” he admits. “Now, after Transparent, Bosch and The Man in the High Castle, I would never underestimate any platform. Great work can be done anywhere. It’s great to travel from platform to platform; it’s great to start online and end up on Netflix or HBO, but that’s just a sign of the quality of the work. Content will always win out – if the content is good, people will see it.”

But can fans now look to a fourth season of Blue, either on television or on WIGS’s dedicated website? “We’re not quite sure yet what shape it’s going to take,” reveals Garcia. “We’re very pleased it’s doing so well on the Lifetime Movie Channel. It’s gone through many incarnations so we’re waiting to see what’s next.

“Obviously I’m happy Blue’s had such a long life. It keeps on giving. We had very good actors on it and we did a lot with very little money, so I’m just happy it’s still going. It’s had a longer life than a lot of stuff made a lot more expensively. And, as always, Julia’s work is really excellent, so I’m always happy about that.”