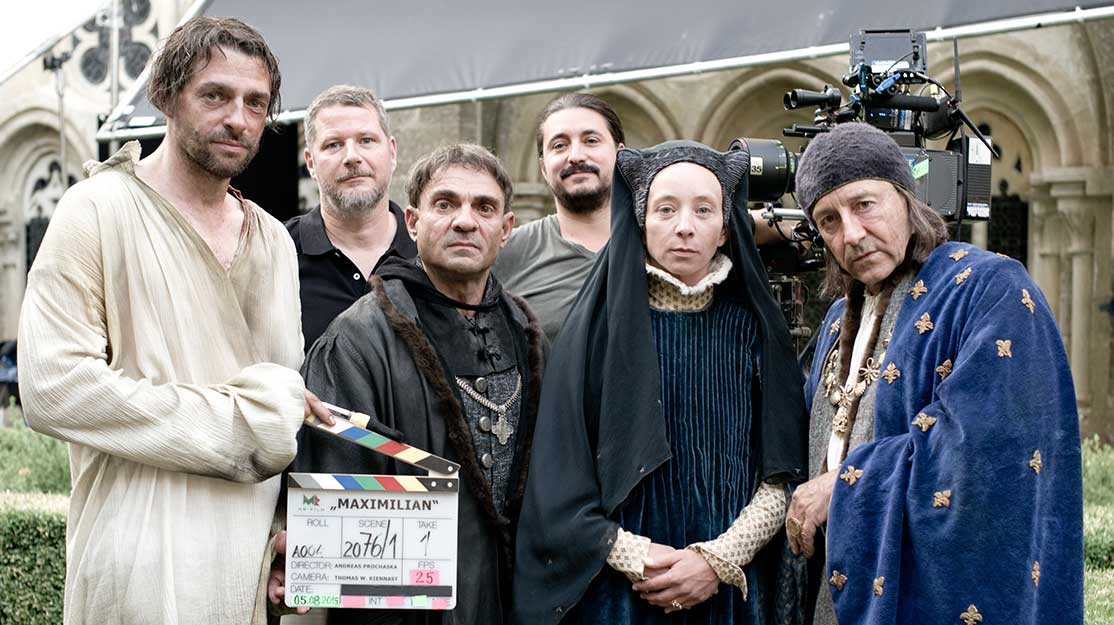 Andreas Prochaska, director of Austrian period drama Maximilian, reveals the challenges of realising an epic, action-packed script while sticking to a strict budget.

Andreas Prochaska is under no illusions: he is facing the biggest challenge of his career. The Austrian director is a multiple award winner in his home country and in Germany for his work behind the camera, most notably claiming an International Emmy in 2013 for TV movie Das Wunder von Kärnten (A Day for a Miracle) and several best director gongs for 2014 feature film Das Finstere Tal (The Dark Valley).

His focus is now on Maximilian, a €15.5m (US$17.5m) television drama in production for MR Film, Beta Film, Austrian broadcaster ORF and German network ZDF. Set in 1477 in the Austrian Middle Ages, the three-part miniseries retells the love story between Mary, the orphaned daughter of the ruler of the House of Burgundy, and Maximilian, the son of the Roman Emperor, set against a backdrop of politics and power struggles.

“I got a phone call three or four years ago about a project about Hapsburg and the founding of the empire,” Prochaska (pictured second from left in the main image) recalls. “I was immediately interested in being part of it because I think it’s a great European story and a great love story, and you have all the ingredients for a big TV production – love, politics, elements of a thriller and a bit of action. There’s also something very timeless about the whole thing.”

Prochaska is no stranger to costume dramas. The Dark Valley is a western set in the Austrian Alps, while he also directed TV movie Sarajevo, about the assassination of Archduke Franz Ferdinand – considered to be the incident that sparked the build-up to the First World War. Yet it is Maximilian he describes as the biggest challenge of his career.

“It’s a challenge because I was watching a lot of historical pictures in preparation and there’s a style and a goal you want to reach but we don’t have that kind of money,” he explains. “But you still have images in the back of your head that you want to achieve, so I’m constantly trying to figure out ways to capture those scenes with our budget. I don’t want to just copy and paste other styles, I want to generate a style of my own with my own director of photography (DOP), art department, costumes and make-up.

“We’re not doing a documentary about guys in the 15th century, so we have done research to figure out how to make this interesting for a younger, contemporary audience. That’s a fine line you have to find. But we’re also not doing Game of Thrones. We’re based in reality and we did a lot of research with historians. But they’re like doctors – ask three of them and you get four opinions.”

The story is set within three different courts of Europe – France, Austria and Burgundy – and they are all being filmed in Austria. “If we could take our budget and go where we wanted, it would be easier. But we’re in a situation where we have to spend most of the money in Austria,” the director explains. “It’s a puzzle we have to put together to achieve the things the script requires.”

The logistics of the four-month shoot, which began in August, include 60 castles, palaces, church naves and medieval streets, 3,000 extras, 550 horses, 800 costumes and 100 suits of armour. Real-life settings include the castles of Rosenburg, Rapportenstein and Franzensburg, plus the Votive Church in Vienna.

Prochaska adds: “We’re shooting continuously and we have some travel days in between because the crew moves to the Czech Republic to shoot some battle scenes and in late November we move to Hungary to do some studio scenes there. It’s like a road movie – most of our locations are all around lower Austria so every two days we’re moving. It’s expansive and thrilling for everybody.”

Using real locations will help the miniseries add a layer of authenticity for viewers – but only if the lighting is right, Prochaska says. “We watched a lot of films (in preparation) and what I realised is that the light, to my taste, is often wrong. You get the feeling those places couldn’t have looked like they do in a lot of movies. When I’m talking to my DOP, I always try to find something that still feels real.

“The greatest challenge is ensuring things don’t look artificial with the actors in these weird costumes – the 15th century is not as cool as the 12th in terms of costume. I want to drag the audience into the middle of the scenes and not have the sense of looking at it from a distance that those costumes and locations could create.”

Maximilian also marks the first time Prochaska has worked with French actors, and the director says he enjoyed the opportunity to meet a new group of performers and to find a way to work with them across language barriers.

“We started with a scene in a French court and, thanks to the brilliance of the script by Martin Ambrosch (Sarajevo), we attracted an exciting French cast,” he says. “I don’t speak French, but even if you don’t understand every word, you very quickly get a sense if it’s right or wrong and that’s one of the first great experiences I had with this project. What we’ve seen in the dailies is amazing. Anlgade is a god in terms of acting.”

If television is considered to be a writer’s medium, nobody told Prochaska. With his background in film, where the director is king, he has brought the same level of involvement to Maximilian, including bringing Ambrosch on board to write the script.

“It doesn’t make a difference if I’m in television or film. When I’m doing something, I try to do it as well as possible,” he says. “I’m not just some hired gun to shoot the stuff that’s scheduled. I brought Martin onto this project because I knew he would deliver the material I need to get access to good actors and to get a story that people want to see.

“I was very involved in the whole development of the script. I didn’t get a call saying, ‘Here’s a screenplay, do you want to do it?’ I’m still a hired gun in a sense because it’s not something I was pushing forward, but it costs me two years of my life so I’m very keen that it’s good.”

Part of Prochaska’s involvement in the script process was to make sure the story didn’t go in a direction he felt would be too difficult to achieve on screen. “With our budget it’s not possible to do a battle scene like at the beginning of Gladiator. That’s what people expect when they see battle scenes,” he says. “I didn’t want to get into places where I couldn’t win.”

This meant that set pieces beyond the show’s budgetary limit had to be worked around with some creative thinking, but also meant Prochaska could build up the emotional aspects of the story while fighting takes place in the background. “At the beginning of the whole story, someone is found dead in a swamp in the aftermath of a battle. Then we have a dream sequence for the second battle and another sequence where the tension builds up to the start of a battle before cutting away to the people waiting at home,” he explains. “It’s more emotional to stay with Mary, who is waiting for Maximilian to come back, not knowing if he’s going to survive. For me, it’s more interesting to explore the emotional side of those situations than to do a battle scene we can’t afford.”

Like many film directors of late, Prochaska found the opportunity to move into television too good to turn down, and hopes he will be back for more. “This was something very attractive to me; this kind of miniseries or bigger series are the future of television,” he says. “Single TV movies will still be made but the focus is more on serialised content and Maximilian is a great opportunity for me to go in this direction.”