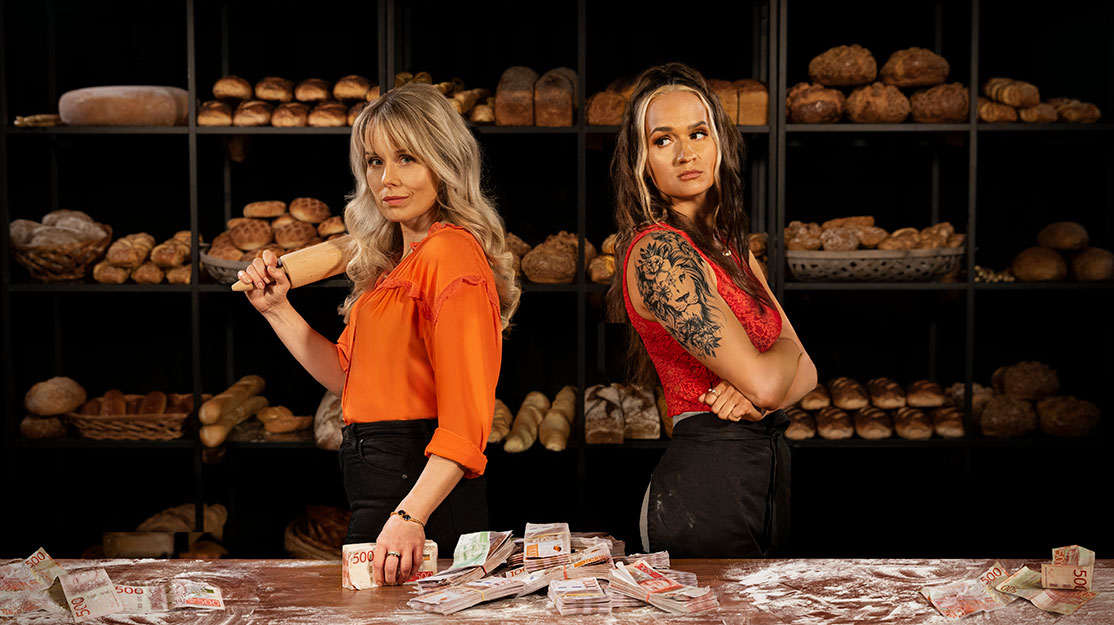 Swedish actor Helena af Sandeberg speaks to DQ about starring in Deg (Dough), in which she plays a woman whose seemingly perfect life is on the brink of disaster until she uncovers the stolen money from a robbery.

As an actor who describes the theatre as her home, it was with a great sense of anticipation that Helena af Sandeberg returned to the stage at Kulturhuset Stadsteatern (Stockholm City Theatre) for the first time after the coronavirus pandemic struck to perform Gaslight, a play by British playwright Patrick Hamilton that inspired a movie starring Ingrid Bergman in 1944.

What transpired in May, however, was “one of the worst experiences of my life,” she remembers, as only eight people attended opening night, including six critics.

“It was really horrible. But our theatre wanted us to do it to show we are here,” she tells DQ, describing the challenges of bringing audiences back to the theatre. “So I played a couple of weeks for eight people a night.

“Throughout my career, I’ve been doing movies, television and theatre, but as Ingmar Bergman said, the theatre is my wife and the movies are my mistress. I learned the grounds of this profession in the theatre and it’s still my core, but I love being on a set making movies and television.”

Compared with that performance, there will likely be many more people watching her latest television project, Deg (Dough), when it debuts in Sweden on SVT on August 30 following its world premiere at French television festival Series Mania this Saturday (August 28).

The eight-part series stars af Sandeberg as Malou, whose perfect life is on the brink of disaster. But when she finds a bag containing SEK47m (US$5.3m), her fortunes appear to change and she buys a bakery to launder the money. Meanwhile, Liana (Bianca Kronlöf), who is being chased by a criminal gang looking for the money from the robbery that landed her ex-boyfriend behind bars, takes a job at Malou’s bakery.

Filming on the series started last August amid the pandemic and then wrapped in December. But for af Sandeberg, her involvement in the show dates back to 2017, when she was contacted by writers Levan Akin, Sara Bergmark Elfgren and Mattias J Skoglund. They had written a treatment and one script with the actor in mind for the role of Malou and they asked her to consider it.

“I fell in love with their writing and also Levan, Mattias and Sara and how they work together,” she says. “What intrigued me about it was the character – Malou is everything. That’s what I look for in characters. You try to find complex characters and she’s all over the place. She’s a fuck-up but she’s also a survivor. She’s loveable but unsympathetic and greedy and I really like that because I feel like that’s what I strive for as an actress, to play characters that are full and complex. Malou is a gift of a character because she’s so many things.”

After those first conversations, af Sandeberg continued to read each new itineration of the script as it was written, in between working on other jobs, such as Quicksand and Alex. Akin is also the conceptual director of the show, which is produced by Nexiko, and helmed episodes with Måns Månsson.

When viewers first meet Malou, she is on the verge of a breakdown. “That was the fun part, and the difficult part,” says af Sandeberg, whose character is a single mother living beyond her means in an exclusive part of town. When she is declared bankrupt and has her possessions repossessed, she hits rock bottom. Then she finds a bag of money buried in some woods and takes the decision to keep it rather than hand it in to the authorities.

“She Googles it and finds out about the robbery and that the criminals are in prison – and then she starts to become a criminal herself,” the actor explains. “She buys a bakery to launder the money and has this money, but, of course, there are other people looking for it. She ends up going on a journey she had no clue about. I hope it’s entertaining but it is also sad because it’s about our society. She’s trying to live up to the standards of a successful woman and makes all the wrong choices.”

Malou, she says, “is like me but 100 times crazier,” preoccupied by her social status and the latest Instagram posts, and forgets what is really important in life.

“At first when I read her I thought, ‘Everybody’s going to hate her.’ But she’s a fighter, she’s trying so hard to survive and she’s trying to do good. She fucks up a lot, but that’s all of us. She’s trying to present herself as so successful and so important with a facade. She finds her way through and grows a little bit.”

The character’s burgeoning criminal enterprise then hits a snag when, unbeknownst to Malou, she hires someone closely connected to the missing loot.

Af Sandeberg describes Deg as a story of the friendship between Malou and Liana, which also highlights issues of class in Swedish society and the fact that people can be good and bad, with neither woman pitched as either a hero or villain.

“It’s hard to say how people will react to her,” the actor says of her character. “I think some people are going to like her a lot. It’s also nice to see somebody not be perfect, because we’re all fuck-ups at some point. I hope people will not agree with her actions but see how hard she tries. I’m very fond of her, because she’s also funny.

“Levan and I worked on how she changes emotions fast – she laughs, she cries. I got to fight. I had to sing when I was ‘drunk.’ Of course, it was very challenging and I had to break down at times but it was everything you could want as an actress. I also felt she wasn’t a traditional female character. She wasn’t the bad one, she was the one who was allowed to be everything, and that’s usually a man. I didn’t feel like I was playing a woman. I felt like I was playing a human.”

The actor admits she’s never played a character quite like Malou before, but compares her to stage roles she has played such as Anna Karenina and Hedda Gabler, as well as Mare Sheehan of HBO breakout hit Mare of Easttown.

“Times are changing a little bit,” she says. “I’ve always felt in the theatre I’ve had great characters, but in film, the man is usually the character getting the bigger storyline and the bigger character. She’s definitely the best character I’ve ever had on television. I’ve played characters like cops who are interesting in other ways but she’s the broadest character I’ve played. That, to me, is new. I’ve played Anna Karenina and Hedda Gabler at the theatre and they had that spectrum, but in television I feel like this is a little new. I see that everywhere now, in international series like Mare of Easttown. They’re becoming different characters.”

Af Sandeberg also compares the complexity of Malou to that of iconic Swedish detective Saga Norén, although Deg is far from the type of traditional crime drama that might carry a Nordic noir label like the show that introduces Norén, Bron/Broen (The Bridge).

“It’s suspenseful, it’s a thriller but it also has a bit of humour,” she notes. “I feel like that will give it something special that makes it stick out a little bit. We’re broadening out a little bit from Nordic noir and this is a very character-driven story.”