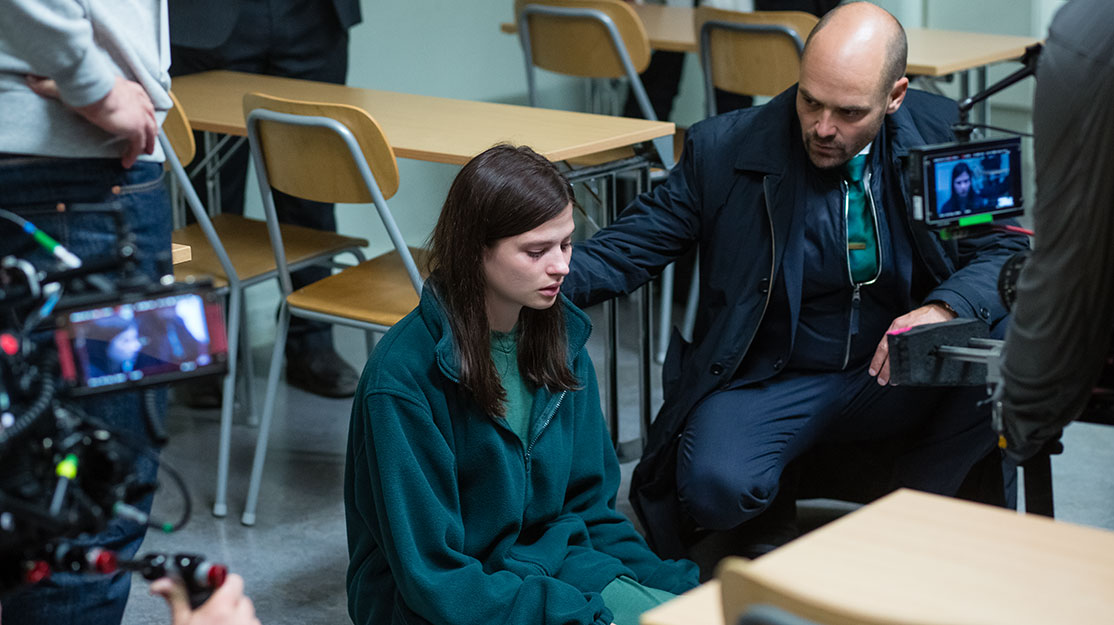 Based on the bestselling novel, Störst av Allt (Quicksand) sees a teenager put on trial for murder in the wake of a high-school shooting. DQ hears from the creative team behind Netflix’s first original Swedish drama.

The opening moments of Swedish drama Störst av Allt (Quicksand) are nothing less than chilling. From a black screen, the sound of half-a-dozen shots ring out, before the camera hovers over the bloodied bodies of the victims of a school shooting. When it comes to rest, with screams still ringing in the background, it is on Maja Norberg, sitting frozen in a chair, blood staining her jumper, a discarded rifle at her feet.

Apparently the only survivor of the horror, Maja is swiftly taken away by police, cleaned up and charged with murder. But what really happened in that room – and what was the role played by her boyfriend, Sebastian Fagerman?

Over six episodes, the drama jumps back and forth between Maja’s police interrogation in the present and a past exploration of her relationship with Sebastian – how he swept her off her feet before she was seemingly corrupted by his dysfunctional lifestyle and family – until it is revealed whether she is in fact guilty of the shocking crime.

“There’s a first time for everything, and you don’t know what it’s going to be like when you work with a company like Netflix for the first time,” says producer Fatima Varhos (Sanctuary, Trespassing Bergman). “I was a bit worried in the beginning, because you don’t know how it could turn out, but Netflix came into Sweden and could easily see we didn’t do high-end drama with young adults in the lead. I’m sure other channels in Sweden would be delighted to show this series, but I’m not sure they would have had the courage to commission it. They wouldn’t have put as much money or trust into this as Netflix.”

Fellow producer Frida Asp (Bonusfamiljen, The Simple Heist) says Netflix recognised the need to make everything “bigger” when it came to sets, the number of extras and key scenes. “Had we made it with a Swedish broadcaster, there might have been a different way of doing it,” she continues. “This series could be broadcast on Swedish television but the method of making it would have been different. I really think it was a perfect series for Netflix and that’s why it was quite easy to work with them.”

The book attracted huge international acclaim due to its young female perspective, with the story told entirely from Maja’s point of view and carried to its conclusion with increasing tension – elements the producers wanted to keep in the series. Asp and Varhos worked with head writer Camilla Ahlgren and lead director Per-Olav Sørensen to bring the novel to the screen, while Lisa Farzaneh (Arne Dahl, Det Som Göms i Snö) also directs. “It’s very close to the book, and that was important to us,” Asp says. “It is a true gift to be able to make it into a series.”

FLX had approached Ahlgren about other projects, but the writer had been busy overseeing Swedish-Danish crime drama Bron/Broen (The Bridge). However, when she was sent the novel, “I knew I wanted to adapt it into a TV series,” she recalls. “From the first page, I thought it was something special. I had pictures in my head and I was so grabbed by the main character. I couldn’t stop reading the book. I had an idea of how I wanted to do it, from Maja’s point of view. This is her story and I wanted to keep it that way.”

Ahlgren opened a writers room with Veronica Zacco and Alex Haridi to work on the scripts, based on the “clear idea” she had for the series. Giolito, a lawyer, was also involved, offering greater insight into the ideas and themes of the book and helping to read drafts.

But working with Netflix was no different from her experience with Swedish pubcaster SVT on The Bridge, she says. “The only difference is we had a lot of Skype meetings,” she jokes. “We had discussions but they trusted me. I also like to work with producers because they help me in my work and add things to my story and help me to do it better. It’s teamwork, and that worked very well.”

Central to the series is the love story between Maja (Hanna Ardéhn) and Sebastian (Felix Sandman), whose increasing influence over his girlfriend as their relationship develops is explored through flashbacks. “Maja is very controlled and the good girl at school,” Ahlgren says. “Suddenly, she’s with someone who can break the rules and is exciting. I can imagine her feeling that she’s now in another world. He also really needs her; she’s the only one he can rely on. One of the themes is about absent parents and dysfunctional families. That psychology is very interesting. It’s a very strong love story but there are a lot of different things in it.”

Director Sørensen was one of the producers’ first choices to steer the series, owing to his reputation for suspense dramas, and he too had read and loved the book. “It was a perfect match,” Asp says. “He has a certain method of working with actors. That made it great for both the amateurs and the experienced actors. He had a way of making it feel authentic, real and alive. He’s a brilliant director.”

Ahead of Sørensen’s appointment, just three months before production began, several key decisions had already been made. The producers decided Quicksand would be shot in the affluent Stockholm suburb of Djursholm, where the novel is set. Casting also began early: by the time Sørensen arrived, “we had seen 1,000 Majas,” Asp reveals. “When he joined, we said, ‘Here are 20 we think have potential.’ So we didn’t lose too much time because he was late joining. We had huge time pressure, but I feel we have been in control of the situation the entire time. It’s a huge project but we did the things in the right order and always felt confident in our decisions.”

Despite the number of hopefuls, only one truly stood out for the role of Maja. “Hanna has this face and with it she can express so many different kinds of emotions,” Varhos says. “We needed somebody who could do all of these faces – from so happy to extremely dark and sad – and also carry the part. She’s been in the picture every day of the shoot. She’s done an incredible job. She has incredible strength and she’s a great actor.”

Complications on set included finding a yacht that appears in episode one and filming spectacular party scenes that take place in Sebastian’s luxurious family home.

“Making parties in a way that feels real in a movie or series is really difficult,” Varhos explains. “We wanted to get the tone right, we wanted it to be realistic. Happily, the parties in the series came out great.”

Though the ending of the book stands strong in the series, which is exec produced by Pontus Edgren and Martina Håkansson, Ahlgren says it was important to keep viewers guessing over Maja’s guilt right up to the conclusion. How to achieve that was a discussion that kept the producers and writers engaged throughout the drama’s development and even during the editing process. Netflix also brought in an additional exec producer who hadn’t read the book or seen any of the scripts to cast a fresh eye over the drama.

Most importantly, however, Ahlgren believes the series will capture audiences around the world when it launches in April, with a story rooted in Swedish culture. “It has been very intense. We worked very fast but everyone was in it,” she adds. “The most exciting challenge was making the first show for Netflix. I’m proud it’s their first original Swedish series.”

While on the surface Störst av Allt (Quicksand) appears to be the cut-and-dried story of whether a high-school teenager is guilty of carrying out a killing spree, the series is far more complicated than that.

It’s that underlying complexity that drew lead director Per-Olav Sørensen to the project. “It’s a story about murder; there’s an investigation going on; it’s a heavy love story; it’s a drama about growing up; it’s a court drama; it’s a political comment on a segregated Sweden,” he explains. “But in all this, we portray a young woman pushed to take impossible choices in her young life. Finding a storytelling balance in all this is fascinating work.”

Sørensen worked closely with head writer Camilla Ahlgren to ensure that by the time he was on set, “her intentions for the story and every single scene are in my DNA.” She was also just a phone call away should he need her advice, with the script still open for rewrites deep into filming.

The director says the show presented him with a unique challenge due to the fact the novel is written like a long monologue purely from the perspective of Maja, the accused at the heart of the story. Early on, he ruled out using voiceovers to convey her inner thoughts, instead using close-ups to reveal the facial expressions that betray Maja’s true emotions.

“We wanted the camera to be as close to her, to her eyes, to her smile, to her thoughts as possible,” he says. “Maja is the focal point of our storytelling and we did not walk away from this at all. Maja is at the centre of every scene. The young actor, Hanna Ardéhn, gave an out-of-this-world performance. I am forever grateful for her courage, generosity and talent.”

Scenes were shot with two or three cameras at once, with long takes that allowed the actors an unusual amount of freedom. “The actors acted in super-realistic surroundings and were always ‘on’ camera. They should never find the camera; the camera should find them. And my DOP, Ulf Brantås, was not interested in perfect framing. He and I were interested in framing the situation.”

Sørensen’s earlier series, including Nobel and Kampen om opTungtvannet (The Heavy Water War, aka The Saboteurs) are also available on Netflix. The director says making Quicksand directly with the streamer was a “great experience,” adding: “The Netflix producers and their team were extremely well prepared. They gave excellent feedback, we had good and meaningful discussions along the way, and I really felt the series we locked was a director’s cut.”