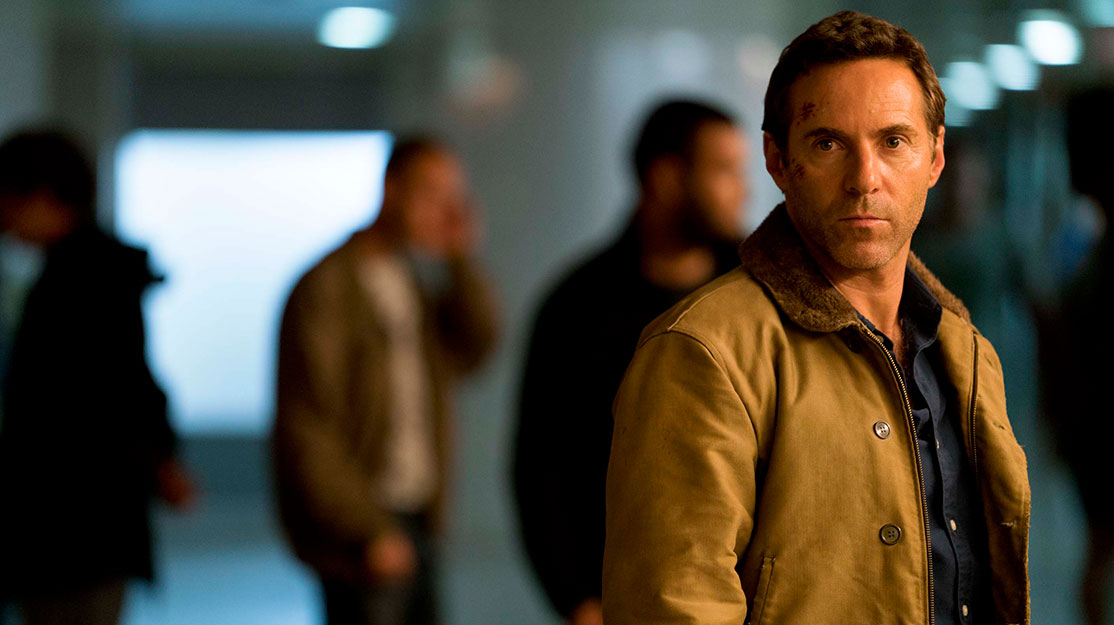 Alessandro Nivola talks to DQ about his starring role in Channel 4 political drama Chimerica, making the leap from film to television and his commitment to working with only the best directors.

It has been more than 20 years since Alessandro Nivola scored his big-screen break, starring opposite Nicolas Cage and John Travolta in director John Woo’s epic, balletic action movie Face/Off. In the intervening years, he has mostly focused on features, save for roles in Cold War miniseries The Company, comedy Doll & Em and HBO telemovie The Wizard of Lies.

But as talent in front of and behind the camera has migrated from film to television, particularly over the last five years, Nivola has started to shift too. First, he set up King Bee, the production company he founded with his wife, British actor Emily Mortimer (the Em in Doll & Em). Then he took the lead in Channel 4’s four-part miniseries Chimerica, which concludes in the UK this evening. The full series, produced by Playground (Wolf Hall) and distributed by All3Media International, is available on the broadcaster’s All4 catch-up service.

“When I was starting out as an actor and starting on movies, to do a TV show meant capitulation,” Nivola says bluntly. “That was your career done; you gave up the fight for having the most prestigious career you could have and you were just trying to pay the bills. Obviously that has completely changed.

“For people like me, just given how that had been drilled into me growing up in terms of what my ambitions were, I guess I’ve been slow on the draw in terms of being aware of how that playing field has changed. But I’ve definitely embraced it. That’s only going to continue.”

When he received the offer to join Chimerica, “it just seemed totally obvious it was a job I should do,” the actor says, describing the “incredible” role of Lee Berger, the topical subject matter at the heart of the story and the “great dialogue” written by Lucy Kirkwood, who has adapted and updated her 2013 stage play of the same name for television.

The story opens in Beijing in 1989, where photographer Berger captures an image of the Tank Man of Tiananmen Square, when a man carrying two shopping bags stood in front of a line of tanks during protests in the Chinese capital.

The series then moves to New York in 2016. Donald Trump is on the verge of becoming US president, while Berger’s career is in jeopardy when rumours swirl that he faked an award-winning image of a Syrian war victim. To salvage his reputation, he decides to find Tank Man.

The opportunity to star in the series “dropped into my lap,” Nivola recalls, with his agent sending him the script while he was on a ski trip. “When you get a straight offer that requires you not to do anything at all to get the job, it’s usually a piece of shit,” he says. “So it was kind of a shock it was as good as it was. I jumped in immediately.”

The actor describes his character as a “radical idealist” who feels passionately about injustices suffered by underprivileged people. But he’s so zealous that it leads him to make poor decisions, such as doctoring the photo – an act he carries out to bring more attention to the suffering of those in Syria but one that only ends up bringing himself under the spotlight.

“It really becomes a story about the complete disintegration of his reputation and sense of himself and how he tries to restore that,” Nivola says. “This obsession that grows in him, about trying to find that man whose picture he took 30 years ago, becomes a monomaniacal hunt that destroys a lot of people’s lives in its wake. One of the things I found interesting about the character was this is a man whose good intentions end up wreaking all kinds of havoc on the lives of the people who he cares about most.”

Nivola was hooked by the “nervous energy” of Kirkwood’s scripts, which chart Lee’s descent into madness as he tries to save himself — a journey hampered by his exacting and emotionally draining experiences as a war photographer.

“The personalities and people who are drawn to that line of work, there’s a real restlessness about them,” the actor observes. “They don’t have a lot tying them down and there’s an addictive quality to going back repeatedly into those danger zones. Of course, there are all different types of people who do that kind of journalism, and it’s so important that there are people who are willing to put themselves into that kind of situation. It definitely requires a certain personality and, from the people I spoke to, it does alter you in the same way that being a soldier does.”

As the son of a political science university professor, Nivola grew up discussing politics and surrounded by people in government. So he is also uniquely placed to recognise the political ramifications of Lee’s actions, taking place in Kirkwood’s updated storyline at a time when Trump is rallying against ‘fake news’ on his way to the White House.

“There’s real pressure on liberal America to be squeaky clean. Anybody who is guilty of this kind of move would have to be sacrificed by a newspaper like The New York Times because they can’t be seen to have a double standard, even if his intentions were pure,” he explains. “Photography in particular is something that is going to become more difficult to monitor because of the veracity of images and because digital doctoring is becoming so ubiquitous. It won’t be long before they can put my head on anybody’s body and put out a sex tape or who knows what. In the digital world of photojournalism, the rules are unbelievably strict in order to stave off that moment where there’s no way of telling. In these times where photojournalists have been caught out in this lie, the community really closes ranks on them because they don’t want to be associated with them.”

King Bee, and by extension Nivola, looks to make television that is driven by directors. Series, he notes, have always been writer-led, as it’s difficult for a director to make every episode of the type of open-ended series still being commissioned by US networks. With miniseries and limited series, which are now becoming more prominent stateside, single directors are able to work across every episode and ensure continuity of visual style.

“That can allow for a more cinematic style to be imposed on the TV format,” he says. “That’s been our big goal with the company, and I feel the same way as an actor. I made a decision about six years ago that that was my main priority with choosing jobs – just following directors. It’s really changed my career. For a while, I was taking small roles just to work with directors. Even those more supporting performances got more attention than some of the stuff I’d done before, just because I was working with the top guys.”

“I realised at this late date that movies and television really belong to directors, and I’ve relinquished any kind of control over it as an actor and just given myself over to directors in a way I hadn’t as a young actor,” he continues. “That’s why this changing format is so good for television, because it’s attracting [Boardwalk Empire’s Martin] Scorsese or whoever to be directing television.”

On Chimerica, Nivola worked alongside director Michael Keillor, whose credits include Critical, Line of Duty and Strike: The Cuckoo’s Calling.

“Some of the people I’ve worked with early on may have been bright and good guys but just lacked something really particular or eccentric about them that made their style and vision original. Michael really has that,” the actor says. “He’s not like anybody else, and I felt that from the first time I met him. All of his inspiration for the show [came from the] kinds of movies that I have loved in the political thriller canon, so I totally put my trust in him.”

Shooting took place in the UK, which doubled for New York, and Bulgaria’s Sofia, which stood in for China. Nivola was joined on set by a cast including F Murray Abraham, who plays Frank Sams, and Cherry Jones as Mel Kincaid – both longtime friends of Nivola, having appeared on Broadway at the same time he was acting in his first play.

The scripts called for Nivola, as Lee, to be run over by a car and thrown to the ground in a pile of rubble when a bomb explodes in a Syrian market. “Those were fun,” he jokes, praising the Bulgarian stunt team who were willing to put themselves on the line to get the shots required.

But while the series begins with a bang, it grows increasingly taut across its four episodes, with tension and mystery building to the final instalment. “The idea is that he’s brought so low by this whole event, and all of his closest relationships he slowly destroys,” the actor says of Berger. “He’s left a solitary figure by the end but is also redeemed in some way by the experience. There is a great final twist in the story that will have a profound effect on him.”

Away from producing duties, Nivola was free to focus on his character and performance to help Keillor tell the story the way he wanted. And now that he’s crossed the boundary between television and film, he says he wants to continue hunting down those opportunities to work with the best of the best behind the camera, no matter how big the role and regardless of the format the project takes.

“More and more, the best actors are working in both media and I certainly think there are great opportunities in both television and films,” he concludes. “Now there’s all these movies being made for Netflix, so the lines are completely blurred. For me, it’s all about directors.”