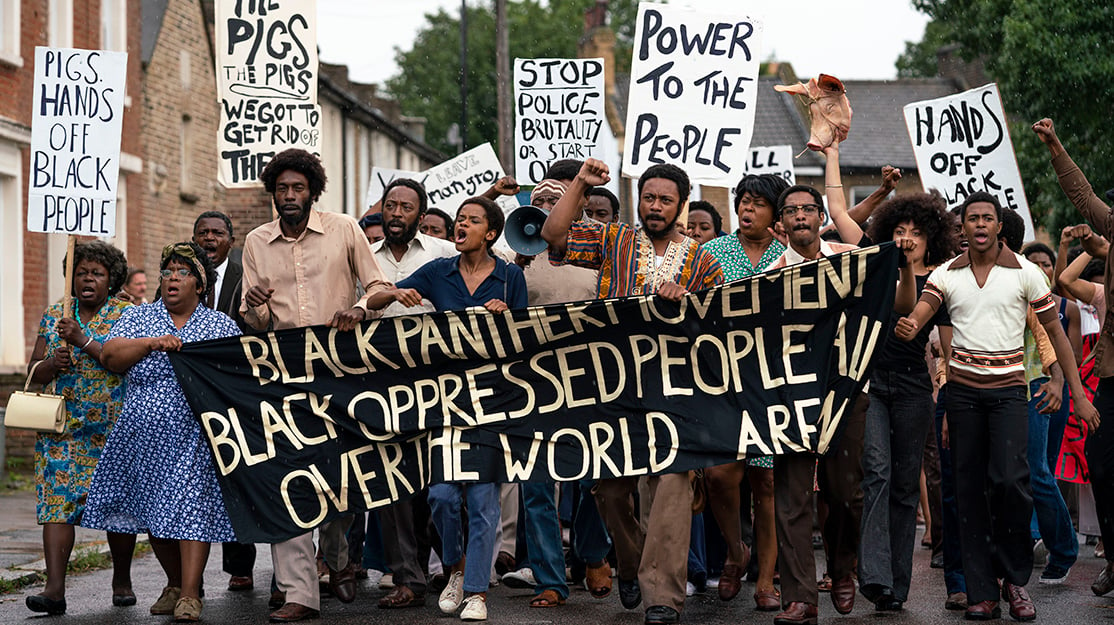 Steve McQueen’s anthology Small Axe took home five awards at this year’s British Academy Television Craft Awards, which also recognised series including I May Destroy You, His Dark Materials and I Hate Suzie.

While the world endured numerous lockdowns amid the coronavirus pandemic last year, thankfully there was no end of top television to keep everyone stuck at home entertained. That level of quality on screen was thanks, in large part, to the outstanding work of those behind the camera, whose achievements were celebrated on Monday night at the British Academy (Bafta) Television Crafts Awards 2021.

Small Axe, writer and director Steve McQueen’s five-part anthology about the lives of West Indian immigrants in London between the 1960s and 1980s, was the biggest winner of the evening, taking home five prizes: JoJo Williams for Make Up & Hair Design; Jacqueline Durran for Costume Design; Helen Scott for Production Design; Shabier Kirchner for Photography & Lighting: Fiction; and Gary Davy for Scripted Casting.

I May Destroy You, Michaela Coel’s acclaimed drama series about a woman seeking to rebuild her life after a sexual assault, also picked up three prizes. Coel herself won the award for Writer: Drama and shared the prize for Director: Fiction with Sam Miller, while the show’s editing team also took home the Editing: Fiction award.

After all the prizes were handed out, DQ heard from some of the winners about taking home a Bafta and their award-winning work. 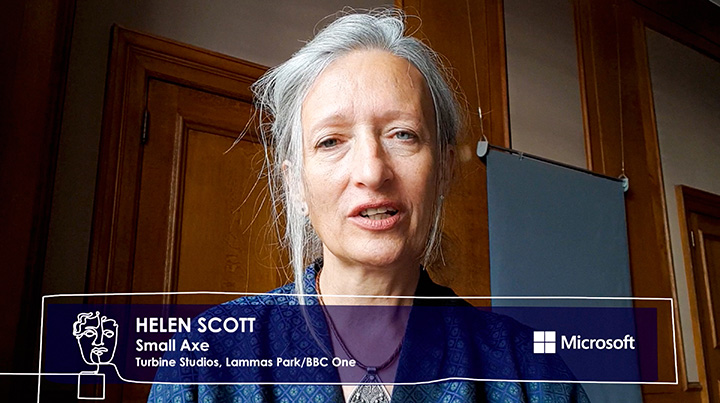 “We had some very solid background material for what we were trying to achieve, but then we were shooting in London 50 years later than the stories happened. It was just really hard to get locations that were anything like we imagined they should be. That was probably the biggest challenge, and of course there are a lot of locations across the whole series. It was hard work finding those.

“The initial conversation [with Steve McQueen] was a meeting before I got the job, an interview I suppose. We had a really great conversation about the Mangrove [the community centre at the heart of the first film, also called Mangrove] and the fact they reached a point where the [anti-racism] message they were trying to tell wasn’t being heard so it had to be visualised somehow and how in that situation people resort to the written word and protest. That became a hook for the Mangrove story, that it would be a very graphic episode [pictured top]. We both got quite fired up by that, especially in that post-war London, which was very dusty, beaten up and unglamorous. There’s no glamour about London at that time. It was just a fresh voice on that backdrop.

“[Working with McQueen], he’s so alive and passionate and so upbeat, somehow. He always runs with an idea. You never go to him and feel stopped. He always embraces what you said or what you’re trying to do and helps it along and puts faith in that somehow and helps you to take it somewhere in a very positive way. It was really lovely working with him. It was hard and he pushed hard but he embraced everything you brought to the table and that was the same for everybody.

“Alex Wheatle, set in Brixton and about the 1981 uprising, [was the most challenging film] because it had loads of locations. The story was quite epic because it started with Alex as a boy in a care home and then he moved to Brixton and there was the uprising and he went to prison. There was a big arc for the story with lots of locations and beats. That seemed to be a fairly chaotic episode visually, it was difficult to know where to go with it and what to hook it all on. Again, finding those authentic locations in the London we see today was hard. We did a lot of it in Deptford [in south-east London] and a little bit in Brixton, so we moved all around London for that.

“It’s really great to have been a part of Small Axe. Whatever Steve McQueen was doing, I would have said yes, of course. It’s been fantastic. I learned loads doing it about those stories and it’s been a real privilege and a great pleasure.” 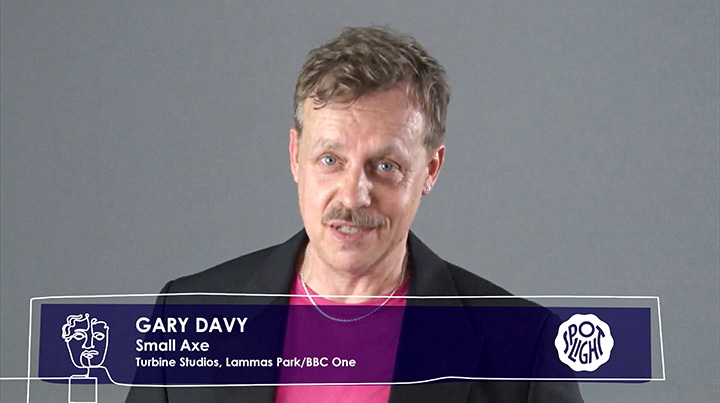 “It’s all Steve McQueen. He is the maestro and has just helped all of us, so it’s amazing. Steve straight away just said, ‘Everyone’s the same.’ He just wanted the right person for the part – that’s the note he gave me. I’ve seen him on set with big stars and someone who’s brand new and he’s exactly the same. He just loves actors.

“As casting directors, when we read something and we’ve done some research before so we know the world, people do jump into our minds. It is strange. For example, the second show, Lovers Rock, when I read that I saw somebody who was a Bafta winner (Micheal Ward) and somebody who had never been on film before (Amarah-Jae St Aubyn) and I introduced them both to Steve and they both got the part because Steve just saw the potential in somebody who hadn’t done something exactly the same as somebody who had just won a Bafta. It’s his vision as well.

“We had a bit of time with the first one [Mangrove] to get us all together as a group and a family and [figure out] how we’re going to work together, and because it was such a big cast, that’s where we had time. It wasn’t difficult but it just took a bit longer because we had the time to do it.

“When you’ve got an Oscar-winning director who says to you, ‘Just get me the right person,’ it does help [the casting process]. We had the BBC, who were amazingly helpful, we had Amazon coming in later who were also really helpful. It just meant the same playing field was there for everybody. We had new people, old people, fresh people. I’m always trying to go to drama schools, but also its good to have people who have been around for ages. Some of those people are really talented so it was fantastic for us to give those people a break.

“We’ve been very lucky in television [during the Covid-19 pandemic], unlike the theatre, which we love. We realise we’ve been very lucky. Lockdown has meant we’ve been able to continue with all the protocols, we’ve been able to continue filming, so we are lucky. Things are taking a little bit longer but that’s all. Talent will out. We’re OK, television is fine. It’s theatre I’m really wanting to come back. That’s where all those young actors in the Fringe, in the West End, in regional theatres get those chances to go on stage. They’ve trained for three years, some of those people – give them a chance.”

Writer: Comedy: Sophie Willan (Alma’s Not Normal)
Writer, actor and comedian Willan won the BBC’s Caroline Aherne Bursary to create the pilot for Alma’s Not Normal, which was broadcast last year. She is now in production on a full six-part series. 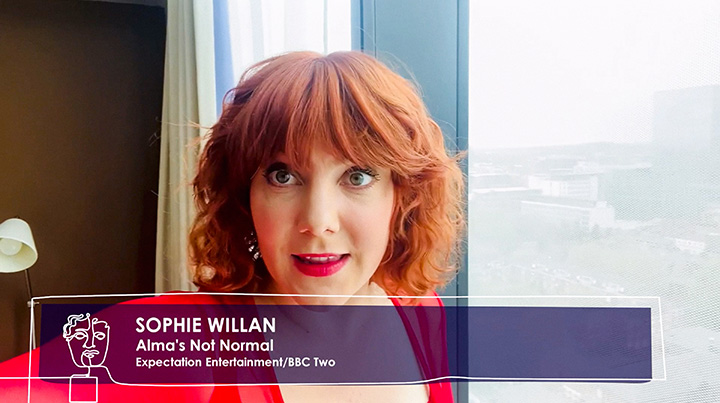 “I just can’t quite believe it. I’m in the country because we’re filming the series and I’ve gone up the hill, screaming my head off, ‘I’ve won a fucking Bafta.’ I can’t believe it. It’s all very mad.

“[Covid] has been awful. You’ve got to wear a mask, you’ve got to have a cotton wool bud stuck up your nose every four days [for testing]. You can’t see anybody who’s not a member of the cast. I’ve been staring at sheep for weeks. It’s quite intense but also on set, because they’ve done so well with the Covid tests, the scenes are not affected and the ambiance is fabulous.

“I’m a show-off, so of course I did [write Alma for myself to play]. Why write something for somebody else when you’re a frustrated actress? Do what you want to be cast in. I always wanted to be an actress and then I found myself going up for roles like ‘the cleaner’ all the time and not even getting those, so I thought I best start writing. I just think you want to cast yourself, because why not?

“[Diversity and introducing new people to the industry] starts with gatekeepers and starts with making a difference behind the scenes, making sure the people that are in control are actually representing different groups of people so when they’re looking for talent, which is subjective as always, they’re getting authentic talent that’s real and connects to experiences on a more diverse level. [BBC comedy execs] Kate Daughton and Shane Allen were fantastic when they set up the Caroline Aherne Bursary, it was brilliant. I was put forward for it and I won it, which is how I got this script commission, and we want to be doing that in more areas and not just when somebody dies. We want to think more long term: how can we be more diverse? How can we have it filtered through on every level of production?

“We’ve set up a training scheme for people [like Willan] who have care experience so they get to be involved in production – runners, producers, the art department – and are learning on a paid living wage as well, which is important. If you’re not coming from a background where you’re shown the world of television or you don’t have Bank of Mum and Dad, how do you get into it? It’s about providing those opportunities in different ways. We also did loads of open auditions in Bolton for working-class and northern actors, wanting to reach many people and not just having your mates in.”