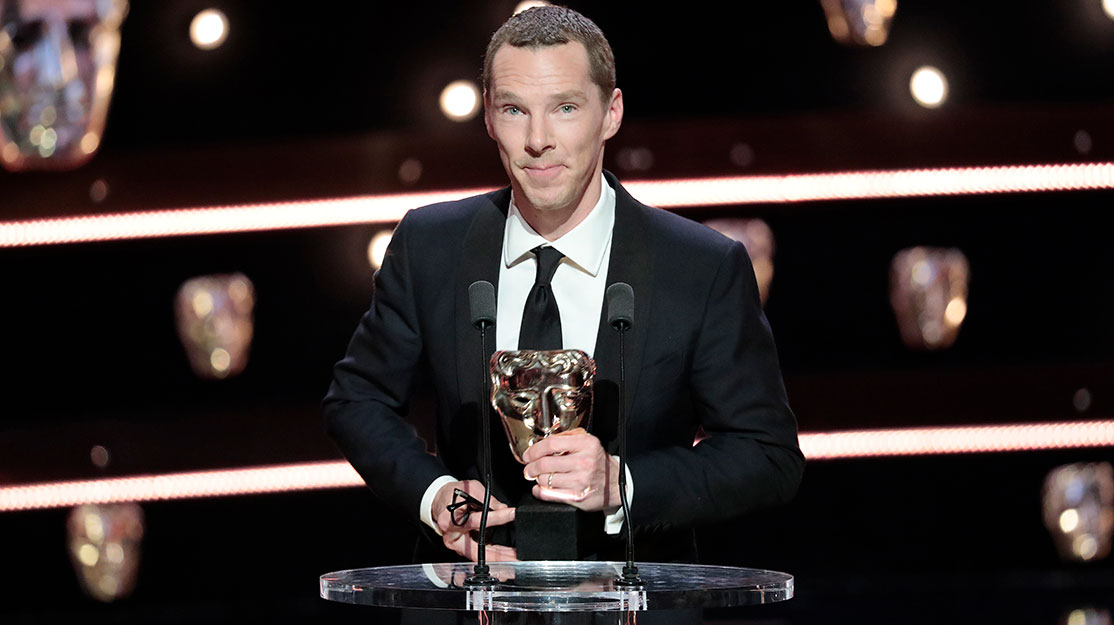 Killing Eve and Patrick Melrose claimed the major drama prizes at the Virgin Media British Academy Television Awards 2019. DQ was backstage to hear from the winners.

Once the ceremony had concluded and the final prizes of the night had been handed out, the winners of the Virgin Media British Academy Television Awards 2019 – or Baftas, as they are better known – returned to the stage at London’s Royal Festival Hall for a final group photograph.

As they huddled together, each clutching their own gleaming statuette, all eyes were on the two actors standing at the front of the crowd. For Benedict Cumberbatch, his triumph in the Leading Actor category for his role in Patrick Melrose marked his first win in eight Bafta nominations across film and television.

Standing next to him was Jodie Comer, winning at the second opportunity for her standout role as assassin Villanelle in Killing Eve, having seen off competition from co-star Sandra Oh, who was nominated in the same category. Oh won a Golden Globe earlier this year for her performance as Eve Polastri, the intelligence agent simultaneously on the hunt for and infatuated with Villanelle.

Similarly, Patrick Melrose’s recognition extended beyond its star, with the fiver-parter kicking off the annual ceremony, which recognised programmes that aired in 2018, by claiming best miniseries.

The Sky Atlantic and Showtime drama is based on the semi-autobiographical novels by Edward St Aubyn that chart upper-class Melrose’s attempts to overcome his addictions and demons, which are rooted in a childhood overshadowed by an abusive father and negligent mother.

Describing his time playing Melrose as “a proper experience and one that I will take with me for the rest of my life,” he added: “It’s something that touched on a lot of incredibly powerful themes. It asks a lot of you as an actor. That’s a great thing. But my chiefest joy, as well as the family I made on the project, is the friendship I’ve made with the man who lived it [St Aubyn].

“He’s an incredible man who, under the pressure cooker of trauma, managed to create this jewel of art in these amazing series of novels that are painfully, brilliantly, funnily, wittily, rawly close to his life and look at what damage, self-abuse, abuse and salvation – in the end, because that is what it ends on – can be. He’s a survivor. That’s my greatest reward.”

The actor went on to describe director Edward Berger (The Terror, Deutschland 83) as “a genius,” noting that everyone on the production team – Cumberbatch was an exec producer – was keen to do justice to St Auybyn’s acclaimed novels. “We thought, ‘We cannot fuck this up. This has to be good.’ You want to do your best.”

After winning the Best Director: Drama award for his work on A Very English Scandal at the Bafta Television Craft Awards a fortnight ago, Stephen Frears was back on stage to collect the award for supporting actor on behalf of Ben Whishaw. In the series, Hugh Grant plays disgraced MP Jeremy Thorpe, who in 1979 was tried but acquitted of conspiring to murder his ex-lover, Norman Scott (Whishaw).

“I’m sorry I’m not Ben,” the director quipped, revealing the actor’s commitments on Broadway prevented him from attending. “He’s a very, very good actor and it was a pleasure and an honour to direct him.”

In a year when Netflix series Black Mirror broke new ground with its interactive episode Bandersnatch, it was the dramatisation of a real-life story that took the Single Drama award. Killed By My Debt, produced by BBC Studios for BBC3, told how 20-year-old motorcycle courier Jerome Rogers took his own life in 2017 when he was unable to pay traffic fines worth £130 (US$167), which spiralled to more than £1,000 with interest. His family have since been campaigning for greater regulation against the bailiff industry in the UK.

Writer Tahsin Guner admitted he found it very difficult to pen the script. “When I first heard what had happened with the news articles, it made me really angry and really upset,” he said. “I knew that was how I wanted the audience to feel. From the feedback I’ve had, it’s a devastating experience to watch, and it was upsetting watching it and making it and writing it.”

Rather than being a complete dramatisation, Killed By My Debt is very much focused on the facts surrounding Jerome’s death. Lines of dialogue were based on his work contract or taken verbatim from a bailiff’s body cam. “You don’t really have to fictionalise anything. Everything you see that happens in the drama happened. Really, nothing is fictionalised,” Guner said. “We had access to phone calls, we had access to all of his payslips. So we really constructed the story from all of those things, from all those factual documentary elements.”

Fiona Shaw, who is best known for her role as Petunia Dursley in the Harry Potter films, was already a familiar face before Killing Eve launched last year. But she revealed her life has dramatically changed since the BBC America spy saga, which airs on BBC1 in the UK, rolled out to critical and popular acclaim on both sides of the Atlantic.

“Often people come up to me and talk about Harry Potter or [1990 comedy] Three Men & a Little Lady or something from the theatre,” she said. “But people came to stop bicycles for Killing Eve. Floods of bicycles going to work would just stop. That’s unusual. That’s never happened before.”

Shaw first read the Killing Eve script while in bed one morning with a cup of tea. As she turned each page, “I wasn’t sure if it was something that might be amazing under the radar, and like five people in London would enjoy it, or whether it was really funny. But I was laughing and I couldn’t wait to turn the page. Then I said, ‘I’m not doing this unless I have lunch with [creator and season one head writer] Phoebe Waller-Bridge,’ and I had the most delightful lunch with her. I’d never met her, but of course I knew [writer and star Waller-Bridge’s BBC3 stage play-turned BBC3 comedy] Fleabag. At the end, I was hers for life and still am.”

Shaw went on to make a cameo in season two of Fleabag, playing a therapist, although she initially rejected the opportunity. “I said, ‘I don’t think I’ve got time, I’m doing so much Killing Eve.’ But [filming on] Fleabag ran on a bit later than they thought and Phoebe asked me to play this psychotherapist,” the actor recalls. “So we just did it one morning and she was spinning plates in that she was rewriting it, I was relearning it; she was just changing things and acting in it. It was an astonishing morning for this tiny sequence.”

As the event headed towards its conclusion, Cumberbatch was back on stage to accept the leading actor award for Patrick Melrose, before stating backstage that he had never been prouder of a piece of work for which he had been nominated. “To win for this really means the most. It’s a dream come true. I’m very happy,” he said, admitting that he thought Hugh Grant would win for his A Very English Scandal performance.

To play a drug addict, Cumberbatch sought advice from people who were familiar with the substances that appear in the show about how to accurately portray their physical and mental impact. “So whether it was depression in the aftermath or getting high on shooting cocaine or being doped on quaaludes or just being a little bit drunk, I sought out the expert help of people who educate people within institutions, within the entertainment industry, within all forms and walks of life about the perils of drug abuse and the powers of addiction, what addiction really is and that anyone can be an addict. They were very helpful and gave me a lot of thumbs ups and also corrected me. That’s how I got there.”

Melrose’s journey across the miniseries runs from drug addict to sobriety and midlife crisis to a confrontation with his mother about the abuse he suffered during his childhood. Cumberbatch said there was constant support on set from director Berger and director of photography James Friend. David Nicholls, he noted, wasn’t precious about his award-winning scripts either.

“It was an amazing experience to work with them,” Cumberbatch continued. “They were great friends and easy and fun, and it had to be fun because of how dark it got and how demanding. Best of all was Edward St Aubyn coming on set and seeing me in some spiral of madness after injecting cocaine. He was incredibly generous and sincere about what I needed to consider to get there and about sharing the truth of his life. I couldn’t think of better people to work with.”

The final award of the night went to a tearful Comer, coming after Killing Eve had also bee named best drama series.

“It’s the best,” the actor said of the series’ impact. “You can’t anticipate how something’s going to go down with an audience, and to see it grow and grow each week and for us to be able to bask in it and celebrate it has been really special. I’ve never had this before, definitely, so it’s been really wonderful.”

Waller-Bridge revealed the anxiousness of writers at the outset of a project when she spoke of asking people to join her on the series when it was still in its infancy. “When you start with something, it always feels like such a big deal to ask people to come on board something that isn’t in existence yet. There’s so much trust and risk and to get this amazing team together; it just feels like the biggest journey. I’m so proud of everyone. I feel so, so lucky.”

The Fleabag star stepped away from writing duties on Killing Eve’s second season, with Emerald Fennell, who stars as Camilla Parker Bowles in Netflix period drama The Crown, taking over as lead writer. And Waller-Bridge believes the change has been “a wonderful thing.”

“Emerald is such a bad ass,” she laughed. “It was painful and hard because I’m moving away from a family and a project, but I’m still there and around [as an exec producer], and seeing Emerald take it and run with it was cool. It’s cool to hand things on and have other people’s input. It can only make things grow.

“I have [watched it]. It’s absolutely fantastic. It’s so brilliant because Emerald’s voice is so unique. There was no sense in getting her to do what we’d done before. There was a real sense, from the whole company, of ‘come and bring your talent to it.’ It really does have her voice, which is very evident in it and does give it this amazing energy, and then [the cast] bring the same kind of glory as they did before.”

With a third season of Killing Eve already confirmed, Waller-Bridge also teased a potential cameo, having not yet appeared on screen in the series. “I would loved to be murdered by Jodie,” she added.