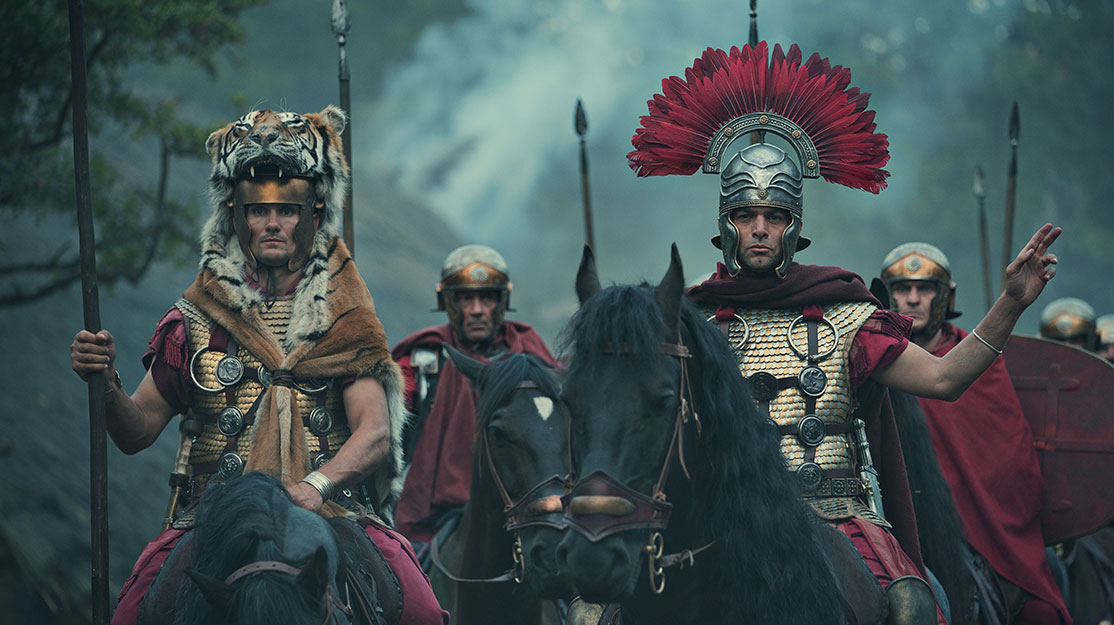 Since their first collaboration on German action drama Alarm für Cobra 11, Jan Martin Scharf and Arne Nolting have risen through the ranks from staff writers to creators and showrunners, most recently on Netflix’s epic historical drama Barbaren (Barbarians).

The pair first met and forged their partnership at a university film club and, after picking each other out as serious writers, they have collaborated ever since. Their early joint credits include episodes of SOKO Köln, Letzte Spur Berlin and Der Letzte Bulle (The Last Cop), before they went on to create mystery series Weinberg (The Valley) and crime drama Rampensau, which is based on an Israeli show about a young girl who goes into school as an undercover agent to bust a drug-trafficking operation.

“You could say that we grew up in business together, but we didn’t start as friends,” Scharf tells DQ. “We co-wrote our first script 20 years ago and we have made our living writing together ever since.”

“It’s good that we started together. If you write alone for a long time, it might be difficult to get into a partnership because you have to accept the other has an opinion too, which is quite hard in a creative collaboration,” Nolting says. “But what makes it successful and helps you to overcome things is, if I’m sitting there alone, maybe there isn’t an idea, but if we are sitting together, there are ideas coming up. Whether they are good or not, that’s another question.”

The pair attribute their solid relationship to a set of rules they established in the early days of their partnership, which includes the simple stipulation that the best idea wins, no matter who comes up with it.

“We can be very direct,” admits Nolting. “We are often sitting in cafes or restaurants discussing our work. One day a friend of mine saw us and he said afterwards, ‘I’d seen you but I didn’t want to say hello because you were having a big fight.’ We were just discussing story in a very normal way.”

As their resumé suggests, Scharf and Nolting aren’t afraid to bounce between genres, having tackled crime, history and the emotion and humour that came with Club der rotes Bänder (The Red Band Society), the German remake of the Spanish drama about a group of teenagers sharing moments of joy and sorrow as they each confront different illnesses in hospital.

But Nolting says their broad tastes are also reflective of the kinds of shows they like to watch themselves, and audiences are the same, he says: “You like to watch a comedy one day and you like to see an action-packed story the next day. That’s the same with our writing. In the German market, for a long time at the beginning of our career there weren’t many genres. It was mainly family dramas or crime stories. It was a very limited range. But now with the international market growing and a lot of streamers, more genres are possible and we happily jumped into it.”

It’s apt that the duo’s latest series is on Netflix, seeing as they have consistently knocked at the door of technological progress in a country where 90-minute television movies on the country’s terrestrial channels have long been the traditional format for drama. Notably, Weinberg was the first hourlong drama commissioned by pay TV channel TNT Series when it debuted in 2015 as subscription services began to take off, before the arrival of platforms such as Netflix and Amazon Prime Video in Germany created further opportunity for storytellers.

“The German television market is very special because it’s large enough to exist on its own,” Scharf explains. “But at the same time, it used to be very limited as German audiences were interested in 90 minute TV movies, family dramas or crime stories, not to mention weekly and daily serials. With the streamers entering the German television market, all of us had the opportunity to change genres, experience new fields and try to find more complex story arcs and worlds.”

Following the lead of German series such as Dark and Dogs of Berlin, Barbarians arrived on Netflix in October. Produced by Gaumont, the show transports viewers to the year 9AD as several Germanic tribes unite to challenge the seemingly invincible Roman army in what would become the legendary battle of Teutoburg Forest.

When Roman forces demand exorbitant tributes from a group of Germanic tribes, Cherusci princess Thusnelda (Jeanne Goursaud) and warrior Folkwin (David Schütter) decide to humiliate the empire. Roman governor Varus (Gaetano Aronica) subsequently sends his foster son, Arminius (Laurence Rupp), to exact revenge – a mission that creates conflict for Arminius and leads him to work with Thusnelda and Folkwin to bring the Germanic tribes together into one army to take on the Romans.

Showrunners Scharf and Nolting wrote the scripts with Andreas Heckmann and were involved in all aspects of the series, from shaping the story and casting to editing and music. They had previously pitched the show to German networks but the prohibitive costs associated with creating the world of Barbarians meant the idea never took off, with an intricate web of European coproduction partners likely needed to finance the show. Thankfully, when Netflix arrived into Germany on the hunt for a historical drama, Barbarians proved to be a perfect fit.

Scharf describes making Barbarians as a learning process, owing to its focus on serialised storytelling and the challenge of pushing the budget in the right direction with a view to creating a visually dramatic series.

“The other challenge comes from the storytelling perspective, because although there are historic facts used in the series, the sources we have are mainly Roman and they’re not very reliable,” Nolting says. “We had to shape the story around historic facts and find our way into a historic event via our characters, so we decided to have a mix of historic characters and fictional characters to get into this story and the events of history.”

“If you start a story that ends up with a big battle, you have to find a way to emotionalise that battle so people feel what’s at stake,” Scharf continues. “Historically this is a very big battle but, in film, unless you’re emotionally involved, you can’t watch people fighting each other with swords. You have to find some way to make the audience care about winning or losing. And beyond that, we didn’t just want to tell a story about victorious Germans – we tried to say something about what is worth fighting for and why you always lose if you go to war.”

While themes of class, ambition and power are all explored with the series, the issue of identity is the most prevalent, as Arminius battles with his Germanic roots and Roman upbringing. “He was a Germanic tribesman living among Romans from a very early age and who betrayed the Romans and fought with the Germanic tribes against the Roman army,” Nolting says of this real-life character. “There was a natural theme there because it’s about belonging and identity. If you think you belong to two different parties fighting against each other, you have to betray one of these sides. So there was a very strong theme written into it by history.”

“That tragedy was very interesting for us,” Scharf adds. “It’s the opposite of a glorious victory because it comes with personal tragedy.”

Filming took place in Hungary and was completed before the coronavirus pandemic swept across Europe. Post-production was also largely unaffected by Covid-19, save for remotely recording the 30-strong orchestra in Budapest. The musicians also provided the war cries heard in the series.

The writers are now developing their next show. “It looks like we will change genre again,” Scharf says, with the duo looking to cement their showrunning status in a country that is now more open to new ways of storytelling.

“Germany has a very big TV market and very good people working here, and they’re unbound now. Everything has changed in the last few years,” Nolting says. “All this creativity was always there but it couldn’t evolve that much. Now is the time.

“TV is changing from above; it’s not a rebellion [from the writers] on the ground,” Scharf adds. “As there are new powers in town who ask for different ways of storytelling, creatives feel liberated and are very happy and keen to experience that new field. Showrunning in Germany has also yet to find its role because there is no experience with writers showrunning a series. But hopefully we are in a good position because we have already done it.”