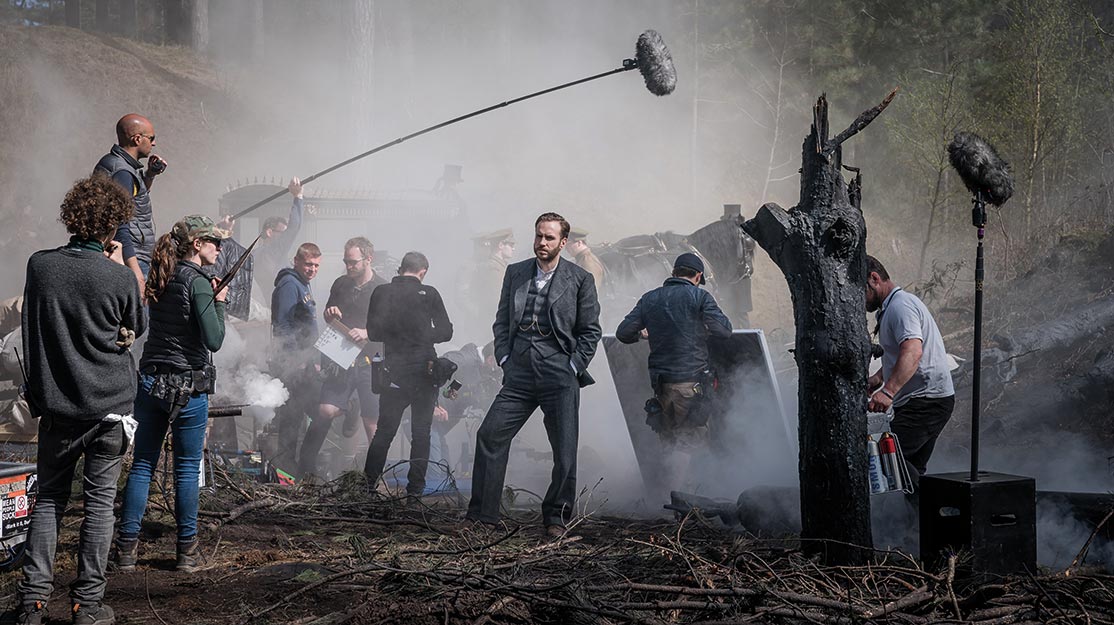 Science fiction crashes into Edwardian England in The War of the Worlds, a new BBC adaptation of HG Wells’ iconic 1897 novel. Writer Peter Harness, executive producer Damien Timmer and director Craig Viveiros tell DQ how they took this futuristic story back to its period setting.

Screen adaptations often update or revise their source material in some way. Take HG Wells’ 1897 novel The War of the Worlds for example: it’s been brought to the big screen twice, first by director George Pal in 1953 and then by Steven Spielberg in 2005, and both times it was updated with a contemporary setting. The same approach was taken when it was recently remade https://dramaquarterly.com/dangerous-new-world/ for television by Canal+ in France and Fox Networks Group.

So when writer Peter Harness (Jonathan Strange & Mr Norrell) and UK producer Mammoth Screen (World on Fire) set about developing a new three-part version of the classic science-fiction tale for the BBC, it seemed like an innovative idea to set the action at the time Wells wrote the now iconic Martian invasion story.

Eleanor Tomlinson (Poldark) and Rafe Spall (The Big Short) lead the cast as Amy and George, who face the escalating terror of an alien invasion and are forced to fight for their lives against an enemy they had never dreamed of. Rupert Graves and Robert Carlyle also star in the drama, which is directed by Craig Viveiros (And Then There Were None).

Harness began work on the project back in 2015, when Mammoth MD Damien Timmer first asked him about adapting Wells’ novel. A fan of the book – and of Jeff Waynes’ 1970s rock musical version – he was intrigued by the idea of setting it in the time of Wells, mashing up Edwardian England with Martians and death rays.

“It’s quite a brutal book,” he says of the source material. “There’s nothing cosy or Jules Verne about it. It’s very much a description of what it must be like to be attacked and invaded by far superior forces and technology.”

The challenges of creating a television version were clear from the outset, with the story following a nameless narrator who is little more than a witness to events. Harness was, therefore, tasked with creating characters the audience could root for.

Another change he made from the book was to give Amy, who hardly features in the novel, a more prominent role. “It is very much her journey,” Harness says. “She’s a tough and resilient character who really takes the role of the action hero in it. Her husband, George, is slightly more emotional and vulnerable, and I thought it would be interesting to have her as the one who copes and him being badly affected by things.”

Harness says every adaptation can be tricky, and The War of the Worlds was no exception. It wasn’t just the lack of characterisation that he had to overcome in bringing the story to the screen, but also the fact that the show would be telling a story that is now incredibly well known. “It’s more or less the first alien invasion story and I wanted to make it reasonably surprising, to try to get some of that feeling of newness and shock that would have been in the original book for people who hadn’t heard of Martians, alien invasions or spaceships,” he says. “So that’s been quite interesting and fun to do.”

Harness sought to create tension by establishing the stakes early on and keeping “the terrible thing” from happening for as long as possible. Then once the invasion begins, he looked for ways to isolate people and put them in seemingly inescapable situations.

Without a big-screen budget, Harness wanted to keep the action on the ground and present the ensuing conflict from the point of view of the characters as they charged around London and Surrey to the south of the capital, with the production actually filmed in and around Liverpool in north-west England. “So you don’t necessarily ever get a big pullback and see the big destruction all around,” he says. “It’s what it must be like on the street running from something, being attacked. I wanted it to feel more like a contemporary horror film mashed up with a traditional period drama, so I concentrated quite a lot on making it unsettling, mysterious and tense. We’ve got some very nice set pieces that go a long way with tension and terror.”

Behind the camera, Viveiros was keen to be faithful to the era in which the story is set, though in a way that resonates with contemporary audiences. “Back then, it was all about the fear of mechanical machines,” he notes. “We’re past that now, they’re part of our lives. The fear now is technology you cannot see. We’re trying to make the tripods feel like a living thing with alien technology far more advanced than anything we have.”

Actors on set were often playing against a green screen or staring into the sky at something that wasn’t there, but Viveiros says Spall and Tomlinson’s “perfect partnership and great chemistry” brings horror and terror to the screen. He also reserves particular praise for Harness’s take on Wells’ story. “To try to find a human story within the book, where we can invest in characters and feel an emotional tug and also be taken on an emotional rollercoaster, Peter has done the job,” says the director, who has seen his own sketches of the Martians realised during post-production.

Exec producer Timmer had waited 25 years to adapt Wells’ novel, and his persistence paid off once the rights recently became available. But he admits the “irresistible” project was a “foolhardy” thing to take on. “A world has been turned upside down by an army with death rays and huge tripods, and the thing they are trying to conquer is Edwardian England – that’s all quite expensive,” he explains. “Alien invasions are also two-a-penny now, so I thought it was really interesting to go back to the original genre-defining story. HG Wells creates a compelling and ground-breaking story, and it’s conceptually so rich and written with such panache. But what he is not trying to do is emotionally engage the reader with the characters. What Peter has done really cleverly is tell a story about a group of characters that is hopefully very moving and very complex emotionally.”

ITV Studios Global Entertainment is handling international distribution of the series, which Timmer describes as “madly overambitious.” But despite the challenges he has faced, by the time the series airs, hopefully Timmer will think it has been a war worth fighting.

Campbell’s out-of-this-world design
With credits to her name including BBC2’s award-winning Wolf Hall, production designer Pat Campbell is well versed in the art of period drama. Henry VIII never had to face off with Martians, though.

At the outset, The War of the Worlds is the most typical of costume series, setting the scene in Edwardian England and introducing the characters viewers will root for once the invasion begins. “What we tried to do was make the Edwardian world as real as possible so you absolutely believe you are in that time and place – and then suddenly everything changes and you have these hideous monsters from outer space,” Campbell explains.

The production demanded three worlds be created: before, during and after the invasion. “That was one of the challenges because we saw so many places prior to destruction, during destruction and after destruction, so we had to decide which way we worked. Would you start with it destroyed and work backwards, or start good and work your way through the stages of destruction? We did a bit of both.”

The series was filmed around Liverpool, including London exteriors, with the village of Great Budworth doubling for more rural Surrey. Location reconnaissance began in October 2017, before prep started in January last year. Once production was underway, Campbell and her team would work around the camera units, setting things up for them to come in and shoot and then cleaning up once they’d finished.

With sets built 12 feet tall, there was a wide mixture of in-camera effects and VFX, which notably created the Martians themselves, save for a leg or two. But the biggest design challenge was arguably creating the red weed, the creeping Martian plant that begins to spread across the Earth. After a lot of trial and error, the design team carved a landscape out of polystyrene, clad it in silicon gel and then attached enormous crystal spikes to create the red weed effect, with stringy roots falling down.

Summing up working on The War of the Worlds and its mash-up of genres and settings as “just a really interesting experience,” Campbell says: “Doing a period drama is lovely but this was a period drama that really stretched you. What we all found challenging in the art department was the amount of problem-solving we had to do to create the red weed, to create the Martians’ capsule and the different worlds. They were massive problems that had to be solved in a way that would be good visually but also had to meet our budget. That was really interesting because it wasn’t just putting in lots of lovely period props. There were challenges with many different elements.”