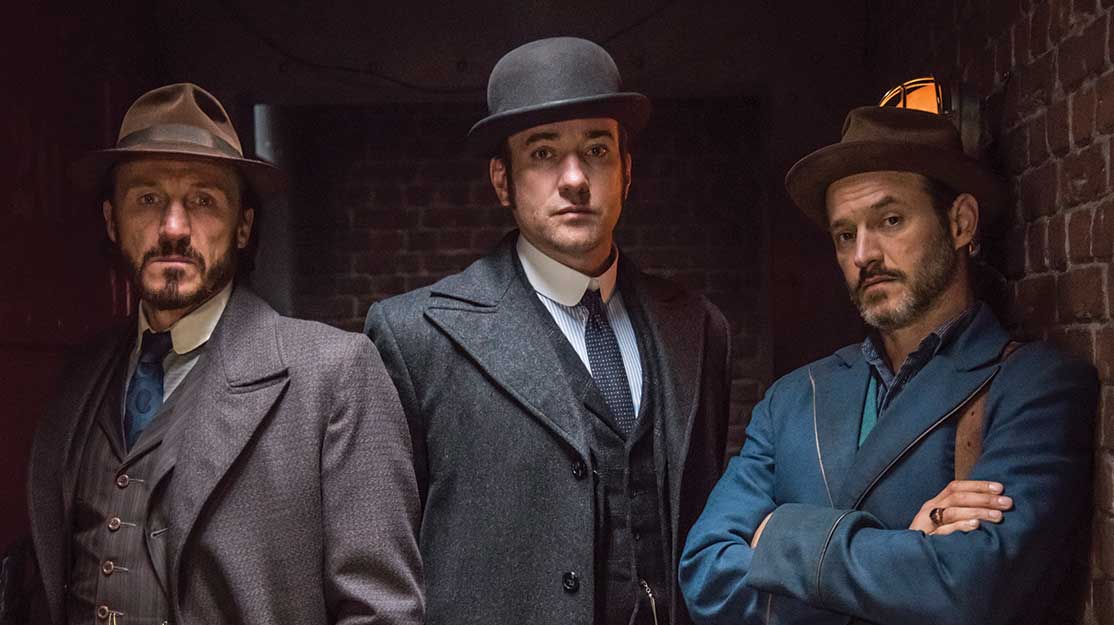 DQ goes behind the scenes on Amazon’s Ripper Street

Enjoying its second chance at life after being canned by the BBC, Amazon’s Ripper Street has found a new production home in the shape of an unfinished hotel. The cast and crew reveal why they were happy to check in.

Set in sprawling countryside on the outskirts of south Dublin, the Kilternan Hotel stands empty. The partially built and extended complex had been the subject of a €171m (US$186m) redevelopment until the property market collapse brought work to a halt.

But the extensive estate proved to be the perfect stage for Ripper Street, the period crime drama that has made the Irish capital its home.

After filming the first three seasons at Clancy Barracks, which are now being redeveloped, producers Tiger Aspect and Lookout Point were looking for a new location in which to recreate Victorian London – and the Kilternan’s array of rooms fit for filming, as well as doubling as offices, persuaded the production team to make their reservations.

The change of filming location comes at an appropriate point in the life of Ripper Street, which started out on BBC1. In December 2013, after two seasons, the series was cancelled by the pubcaster – only to be resurrected in February 2014 by online retailer Amazon, which commissioned a third season for its then-burgeoning Prime Instant Video service.

The deal was a first for a British show and saw the third run air on Amazon several months before playing on BBC1. Amazon subsequently ordered fourth and fifth seasons, independent of the BBC, with season four available now on Amazon Prime Video.

Set in 1897 – the year of Queen Victoria’s Diamond Jubilee and two years after the season three finale – Ripper Street’s latest run sees Detective Inspector Edmund Reid (Matthew Macfadyen) drawn back to Whitechapel where he is reunited with Bennet Drake (Jerome Flynn), now the Head of H Division, and Captain Homer Jackson (Adam Rothenberg). New cast members include David Threlfall (Shameless) as Abel Croker, who is described as a wharfinger, villain and a keeper of other men’s secrets; and Matthew Lewis (Harry Potter).

Filming for 13 new episodes, which will be split across seasons four and five, began last August, with two episodes filmed at a time over 24 days – and the leading actors say they have enjoyed working on the new set, where everything from the weather to the time of day is under the producers’ control.

“I prefer the new sets,” admits Rothenberg. “It makes you feel very focused. Whenever I work outside in the real world, I can’t help but feel like everything is real except me. But you know here that everything is a set and made to act in front of.”

Flynn adds: “At Clancy, we had to deal with the trains, the planes and the cars we were surrounded by, and the weather. It’s much more conducive here.”

Lewis, who famously portrayed Neville Longbottom in the Harry Potter franchise, describes the production design as “second to none.” He continues: “I’ve been very fortunate in my career to work on some big-budget stuff and these sets are impeccable. They’re some of the best I’ve worked on and it adds to the whole atmosphere.”

Lewis, who plays PC Drummond, admits it was daunting joining an established series, but says his fellow cast members have been extremely welcoming. “I’ve had a really good time,” he says. “The scripts this year have been so brilliant – the storylines take such a rollercoaster ride that it’s flown by. I’ve never done anything period before so it was a really great opportunity to jump into a bit of history.”

Flynn, meanwhile, acknowledges the part Ripper Street fans played in Amazon’s decision to save the show. “If you look at how Amazon works, it takes people’s responses to shows very seriously and makes programmes based on that,” he says. “There’s no doubt people’s keenness for Ripper Street to come back influenced Amazon.”

The actor, who also has an important role in HBO’s Game of Thrones, was keen to return when the streamer ordered two new seasons: “The quality of the production and the writing, especially the world and character relationships Richard (Warlow, the series creator) has created, made me want to come back.

“They’re part of what makes it so fun. It’s like coming back to a family, and that’s also partly about being in Ireland and the way the crew is created here and the feeling they create for us to come into. It’s a rich, wonderful job. I’ll be lucky if I find one like it again in my career. It’s been very special.”

Had Amazon not rescued Ripper Street, the story would have been left at a loose end, says Frith Tiplady, head of drama production at Tiger Aspect. “At the end of season two, we really felt like there was unfinished business. The writers knew what they wanted to do (for season three). What was fantastic for us was the response – it did so well critically and worked well for Amazon. We knew it was the show that drove people to Amazon Prime.

“Toby (Finlay, who writes with Warlow) has also written a lot of episodes and together the writers have created this world and these characters. For me it’s about realising this world they’ve set up. They’ve now got three seasons’ worth of richness and they’ve really enjoyed working on character stories.”

But how has the show changed, if at all, by moving to a streaming service? Producer John Rushton says: “We’ve never been shy about showing the more graphic, seedier side of Whitechapel so when it comes to murdering, finding victims and so on, it’s not gratuitous but we’re confident in making sure the craft departments – make-up, costume, art – should be allowed to do that. And it’s in the writing and the language to capture that.”

So while the content hasn’t changed, Ripper Street is taking advantage of no longer being tied to the BBC1 broadcast hour. In particular, episodes one and two of season four were released as a feature-length instalment – just one example of the producers’ keenness to take advantage of the lack of a set running time.

Tiplady explains: “We never have to run to length, which means we can make the show that we want to make. In season three we had a longer episode just because that was how the story panned out. The only thing is when we did the cut-downs (for the BBC1 editions), we thought we’d just remove a strand to make it 59 minutes, but that isn’t how it works because everything’s got a pace and timing to it. We need to get better at being clearer if we have taken something out or not.”

With the show now in its fourth season, writers Warlow and Finlay “know what we can deliver on a scale that works for the storytelling,” Tiplady adds. “On season one they’d ask how much something was going to cost. We now get scripts that we can produce pretty much on first draft. We’ve not had a conversation about that, it’s just how they write now.”

On set, a brand new police station takes centre stage adjacent to a railway arch, while nearby shops and side streets can be dressed to provide multiple locations. Flexibility is key, says Rushton, adding that horses and carts have also been used during filming.

“We can film day and night, and can create any time of the day or night whenever necessary,” explains production designer Stephen Daly. “That’s been a big change for us because it means we can do a lot more nighttime shoots. There are certain angles where you don’t see the police station and the main street to the archway, so we can redress that so it becomes different streets. It changes all the time. All that is part of the planning process.”

The police station also serves as a live set, a first for Ripper Street, meaning the cameras can go through the doors and straight to the reception desk in one motion, without the need to cut to an interior set built elsewhere.

Inside Ripper Street’s new mortuary, which was previously a shower and toilet area for the nearby swimming pool, everything is clinically white with silver trolleys displaying an array of tools and implements, while one particular wall is home to several fridge units.

The pool itself doubled for scenes featuring the River Thames. Ruston adds: “Because we’re so used to the Whitechapel of Ripper Street, the police station in Leman Street and the Jewish Quarter, Richard wanted to give it a greater sense of place to show its proximity to the water. All our stories this season have a link to the river and everything going on in the British Empire. It’s just so appropriate because it’s set during the Diamond Jubilee.”

With a new life on Amazon and a fifth season already confirmed, that shouldn’t be the only celebration for Ripper Street this season.