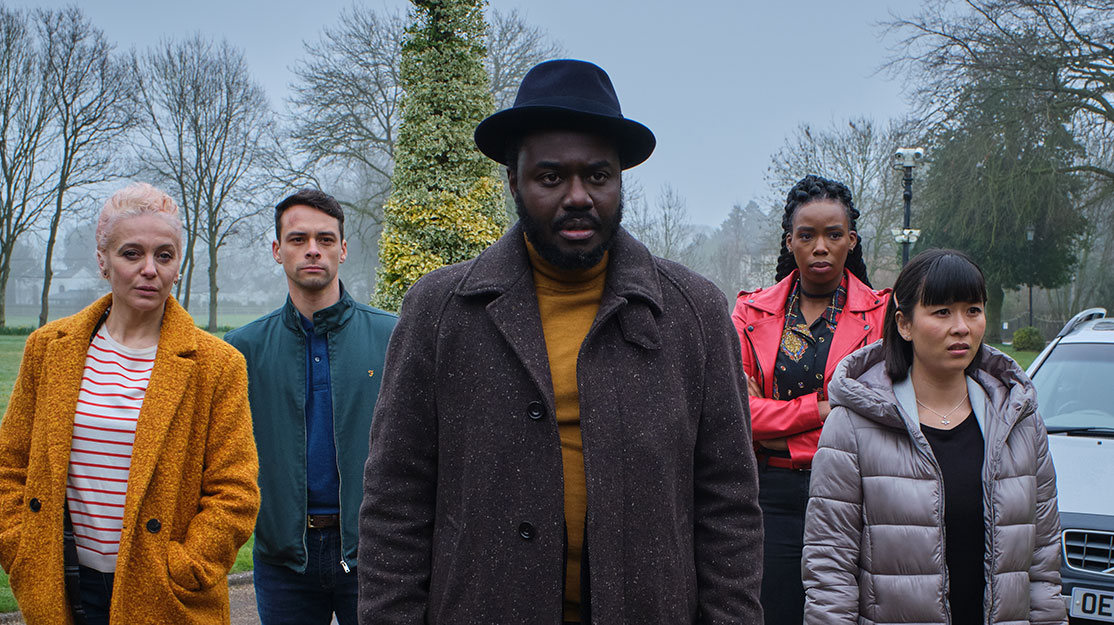 Wolfe star Babou Ceesay tells DQ about his latest role as the title character in Paul Abbott’s forensic crime drama and how he is realising his ambitions to play a more creative role behind the camera.

In 2016, Babou Ceesay had something of a breakout year. The actor, who had been appearing on screen for a decade by that point, saw his stock rise with roles in Ben Wheatley’s feature Free Fire, Rogue One: A Star Wars Story, Jack Thorne’s historic sexual abuse drama National Treasure and a Bafta-nominated turn in BBC single drama Damilola, Our Loved Boy. That same year, he also filmed Guerrilla, 12 Years a Slave writer John Ridley’s love story set against the rise of British black power and radical activism in 1970s London, which was released in 2017.

“That was a crazy year,” he tells DQ. “I was pinching myself the whole time thinking, ‘What is going on?’ Except Rogue One, it’s all down to one casting director – Shaheen Baig. She just went through a period where she was always giving me opportunities. But something just clicked [for me] at that time. I think I grew up as well.”

Since then, Ceesay has gone on to star in US series Into the Badlands, child abuse drama Dark Money and noirish crime thriller We Hunt Together. It’s an enviable credits list for someone who didn’t originally set out to become an actor.

“It’s so strange. I still have moments where I can’t believe that I’m working, or still working. It’s just surreal sometimes for me that I actually became an actor and that I can call myself that,” he says. “I come from such a different world. I’m living in Gambia now. This is my home and I grew up in West Africa, and here it was either [become a] doctor or something else. There was always something else that I should have been doing, but I never really bought into it. And so here we are. I’ve found my place.”

But breaking out was all part of his plan. While Ceesay acknowledges many actors may not admit to having a five-year strategy, that was exactly what he came up with in 2013 – the same year his daughter was born.

After that, Ceesay started paying more attention to the types of conversations he was having with his agent and his relationship with acting. Did he work hard enough? Was he prepared enough for auditions?

“Just little things like that start to shift,” he explains. “I started to challenge myself internally a lot and also externally going, ‘You know, I want more challenging roles,’ and I communicated that to my agent. Then I joined Sam Fox and Kate Morrison, who were then at [management agency] Troika but now they’re at B-Side Management. I just said to them, ‘Look, let’s step it up. Let’s try to do something.’ So we went for it.”

Going for it meant becoming more picky with the kinds of roles he would accept, the flip side of which was turning down jobs. “Don’t get me wrong, I went through periods of time without working or earning any money because I had to start saying no to things,” Ceesay says. “I look back sometimes and I’m just grateful I sat down and did that. In fact, I’m in the process of writing my next four-year plan. What’s the adventure for the next four years? Actors don’t tend to set targets. It’s sort of ridiculous because how do you? But I just thought, ‘Well, if I don’t achieve half of them, the half I do achieve, great.’ At least I do something every day towards it.”

When considering his next job, Ceesay looks for a secret ingredient, that unidentifiable X factor that makes an actor sign up without hesitation.

“Someone like Wolfe is so fun. I can’t compare him to Richard Taylor [in Damilola, Our Beloved Son] or [Guerilla’s] Marcus,” he says of his latest role, the title character in Paul Abbott’s forensic crime drama. “In a weird way, I’m open-minded. I’m just looking for that thing that makes my heart stop, or a challenge. That’s always scary and worth giving a go.”

But part of Ceesay’s new plan is not only to star on screen but create material too. He is currently working with actor and writer Nick Frost (Shaun of the Dead) on a horror series and is also transplanting a Shakespeare play to West Africa, after he was inspired by Japanese director Akira Kurosawa’s films Ran and Throne of Blood, which are takes on the Bard’s King Lear and Macbeth, respectively.

“I wrote my first screenplay during lockdown and, five drafts and 10 months of slog later, I handed it out to a few people and got some very good feedback,” he reveals. “I even signed a literary manager in the States. Once that happened, I thought, ‘Maybe I’m not rubbish at this.’ That’s something else that I’m interested in developing, getting into the storytelling side of it.”

His writing has been wholeheartedly encouraged by Wolfe creator Abbott. In the Shameless and State of Play writer’s latest series, Ceesay plays forensic scientist Professor Wolfe Kinteh, who is described as Northern England’s finest crime scene expert. In each episode of the six-part show, Wolfe and his team are tasked with solving a particularly gruesome and mysterious death, while the title character also attempts to save his relationship with his estranged wife and their daughter. In addition, Wolfe’s increasingly manic behaviour, a result of his bipolar disorder, starts to take hold at work and at home.

The first scene of the Sky Max series sees Wolfe climbing onto rooftops to break into his wife Val’s home – a moment in the script that initially left Ceesay wondering what he was reading.

“I thought, ‘What? What is this guy? I thought this was a forensic show.’ And then I realised whose house it was and I went, ‘Wow, this is brilliant. This guy’s right on the line. He’s a dick, but he’s also kind of lovable,’ and that’s fantastic. And anything Paul Abbott writes will get you to sit up because he’s got a track record of creating fantastic things.”

At the heart of the show is a sense of family, whether it is Wolfe trying to rescue his marriage and spend more time with his daughter, or the colleagues who rally around him at work.

“Ultimately, I described it as a wolf pack rather than just Wolfe; it’s all of us together going on these massive adventures,” he says. “That’s the arc that runs through the whole thing and connects all six episodes. Then Wolfe personally, it’s the little things he does that make him him, like walking out of rooms without explaining himself. I love that. He just finishes what he’s saying and he’s gone. He has to act in the moment. He’s impulsive and has to do exactly what he thinks.”

Wolfe’s bipolar condition is slowly revealed over the course of the series, rising to a crescendo in episode five, when he is called to investigate a fatal fire but discovers the victim was already dead before the fire started. Ceesay watched YouTube videos of people discussing their own bipolar disorder to understand more about it, and then charted Wolfe’s triggers and emotional journey through the series.

“When you do get the chance to watch all six episodes, there is a bipolar arc,” he says. “In episode one, he’s in a certain place. And then certain emotional things happen that start to affect him in episode two. By episode four, he becomes slightly more paranoid about certain things, which then triggers a whole other thing in episode five, which is our manic episode. That’s when he’s really beginning to spin out, and everybody around him knows he’s spinning out. The audience is going to be challenged by that.”

With the star admitting he is squeamish, the show uses some extremely realistic models to create some of the crime scenes Wolfe must investigate, from a man who falls head first into a deboning machine to a decomposing body that explodes in a dramatic, bloody style. To aid their preparation, Ceesay and the cast visited a forensic lab close to the series’ filming location in Manchester.

“It was extremely fascinating. Obviously, we didn’t go and see any bodies, thank goodness. But it was really eye-opening and enjoyable.” he says. “When we’re on set, I’m much more focused on solving the case, but we practiced with all sorts of things. Then we had forensic experts on set for the days when we needed to do the things that we do, and we act our socks off to make it look as real as possible. But the gore is essential to the realism of the show. Maybe don’t watch it while you’re eating dinner.”

While Abbott has already started work on a potential second season, he has also offered Ceesay the chance to join one of his writers’ retreats. But the actor has never been afraid to ask a writer questions, whether it’s Abbott, Thorne, Ridley or Levi David Addai (Dark Money, Damilola).

“Whenever I’m around them, I’m reading their scripts, I’m watching how they structure things and how they create stuff,” he says, having also spent time during lockdown taking part in Sundance Collab courses. “Having written my own screenplay, now I’m more confident about the process, because it is daunting. I have much more respect for fantastic writers. I just finished watching StartUp on Netflix with Martin Freeman and it’s fantastic. I ended up thinking, ‘How did they do this? How do they create this?’ I just don’t know. It’s so brilliant you can’t even see the seams.”

Ceesay also believes that as more actors take on creative roles behind the scenes, a wider range of stories can be told, whether they shape entire storylines or influence a particular character through their own perspective or background.

“If more people are talking through their own experiences, things can happen,” he says. “I’ve got this African background so, taking a Shakespeare play, I can use that to create something that shines a light on where I’m from and make it as specific to here as possible. I don’t know if any of the stuff I’m writing is going to be made, but I will try and see what happens.”