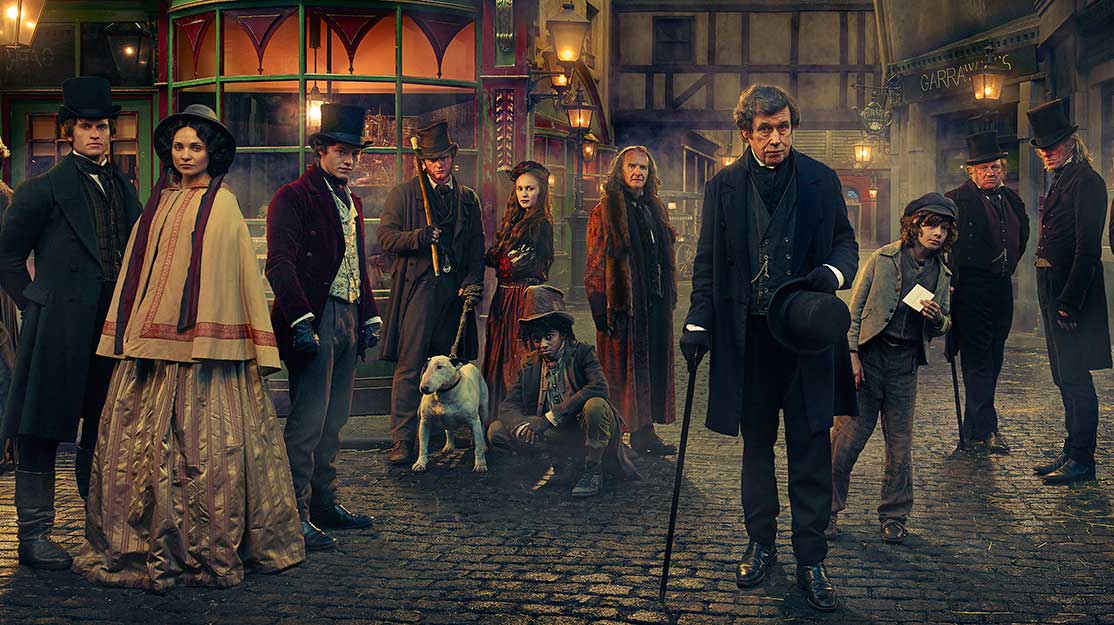 What the Dickens? The art of the shared universe

As BBC1 prepares to air Dickensian, which brings together multiple characters from across Charles Dickens’ works, DQ highlights some of the other shows to have taken the shared-universe approach.

At first glance, Tony Jordan’s mash-up of some of Charles Dickens’ most memorable characters in BBC1’s upcoming Dickensian (pictured above) appears particularly novel. However, the idea of multiple characters from writers’ various works appearing in a wholly original script is, in fact, not especially new.

And the idea of spinning-off or reimagining Dickens’ characters has actually been undertaken before – witness the late John Sullivan’s four-part series Micawber (ITV, Christmas 2001), which starred David Jason, and the previous year’s modern-day take on A Christmas Carol (also ITV), with the network’s then ‘actor de jour’ Ross Kemp.

But with 20 30-minute episodes over the Christmas period (echoing Jordan’s EastEnders origins), there is certainly a risk for the BBC in commissioning Dickensian. The corporation must be hoping that viewers will make the commitment to watch at such a competitive time of the year.

Furthermore, there’s always the risk that the series will merely be a clever pastiche, when compared with viewers’ recollections of the novels or previous TV versions and films.

Dickens’ work has long provided a steady stream of adaptations for TV, the episodic nature his novels ideally suited to the medium. Most recently there has been the BBC’s Mystery of Edwin Drood (2012) and 2011’s three-part Great Expectations, which starred Gillian Anderson and Ray Winstone.

Returning to the subject of mash-ups, these shows have become increasingly popular recently, no doubt aided by the fact that many of the characters featured now reside in the public domain, meaning no fees are due to the estate of the authors.

Both Penny Dreadful (Sky Atlantic/Showtime) and Jekyll & Hyde (ITV) feature or will feature a number of the characters from the novels of Oscar Wilde (Dorian Gray), Mary Shelley (Dr Frankenstein), Bram Stoker (Dracula) and generic figures or urban myths such as werewolves, witches, Spring Heeled Jack and other supernatural beings.

The progenitor of these shows was, of course, Alan Moore’s The League of Extraordinary Gentlemen graphic novels, which were unfortunately marred by a weak movie version back in 2001 (incidentally providing a rather sad finale to Sean Connery’s on-screen career).

Recent rumours over the summer were that the books were going to be re-booted as a TV series by The Blacklist producer John Davis – this time with a brief to stay faithful to the source material. Fans are waiting with bated breath, but don’t expect Alan Moore to be involved in the production process – numerous bad experiences on previous movie adaptations of his work having soured him on the idea.

The world of the police procedural has always been fecund in terms of shared universes, with the CSI/Law & Order franchises, Hawaii Five-O and others featuring crossovers; the character of Detective John Munch (Richard Belzer) has incredibly managed to appear in Homicide: Life on the Street, The X-Files, The Wire and Law & Order: SVU.

The Simpsons have met Family Guy and Futurama, while Aliens have battled Predators on the big screen. Fox’s The X-Files, meanwhile, had a phenomenal tour of duty in its first nine seasons, sharing an on-screen universe with Millennium, The Lone Gunman, Picket Fences, Homicide: Life on the Streets and, of course, the aforementioned Simpsons.

But the real market leader in terms of cinematic/TV shared universes is Marvel, with company president Kevin Fiege’s long-term strategy paying off in spades, judging by the stellar box-office returns achieved by Marvel-produced movies since 2008’s ground-breaking Iron Man.

When Marvel made a serious move into TV with Agents of S.H.I.E.L.D. (ABC) in 2013, it was generally felt to be a rare misstep, as although the show has made it to a third season, it has never really set pulses racing.

Rushed writing schedules to capitalise on the success of the movies may have had something to do with season one’s perceived problems.

Generic storylines and a rather dated approach (reminiscent of Marvel’s Mutant X in the early 2000s) have hampered what on paper looked like a sure-fire hit.

As ever, Marvel learned from its mistakes, and when Netflix ponied up for a number of series, the company rose to the challenge, with the first Daredevil hitting a home run in terms of critical and fan reaction, which has since been overtaken by the recent release of Jessica Jones, which has prompted talk of Emmy nominations.

The two series, together with upcoming shows Luke Cage and Iron Fist, will culminate in the team-up miniseries The Defenders, which will apparently have a wider role in the Marvel Universe than the environs of New York’s Hell’s Kitchen district.

And, of course, an honourable mention should be made of ABC’s Agent Carter, a series filler that is felt to have surpassed its bigger-budget sibling, boasting some critically praised performances and a strong sense of place in its late-1940s US setting.

Never one to miss an opportunity, DC Comics has recently enjoyed great success in TV, with Arrow, The Flash and Supergirl all performing well internationally. Interestingly, unlike Marvel, the DC cinematic universe will be standalone, so there’ll be no Arrow, Flash or Supergirl appearances in the current movie production slate – or at least not in their TV incarnations.