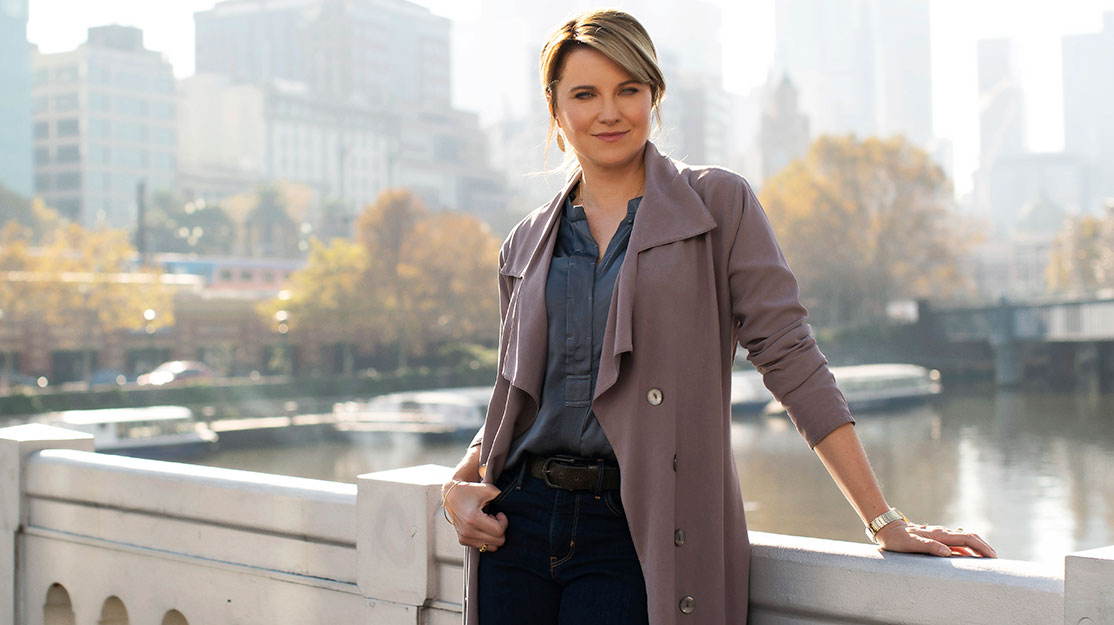 My Life is Murder star Lucy Lawless, famed for starring in Xena: Warrior Princess, tells DQ about her first lead role in an Australian drama and putting an entertaining spin on the evergreen crime genre.

At home in New Zealand, Lucy Lawless is busy planting trees. Her family are the newest owners of a tree farm and she is currently spending her time digging up the ground or discussing tractors – work that sits comfortably alongside her profile as an environmental campaigner and activist.

It’s a welcome change of pace for the actor, who is best known for playing the lead in fantasy drama Xena: Warrior Princess, having spent five busy months across the Tasman Sea earlier this year filming 10-part Australian crime drama My Life is Murder.

From her first talks about the project with producer Claire Tonkin to wrapping the production, 18 months passed by in a blur. The series subsequently debuted down under on Network Ten in July before its US launch on streamer Acorn TV. It arrives on UKTV’s Alibi channel next week.

The show was made at an “unbelievable” pace, Lawless tells DQ on the phone from New Zealand. “For me, it’s unheard of because at that point [of the first meeting], we didn’t even have a script. It was just an agreement with two women going, ‘Let’s do this.’

“Then it went into development hell and eventually all the blockages cleared. We found the right writer and he was forced to write it in just 10 weeks, and then we were off to the races. It was just a magical, serendipitous thing that I would hate to do again under such rushed circumstances, but sometimes that’s how things come together.

“To come up with the idea, sell the idea, put together the production team and get it written and produced, it was remarkable. That’s all credit to Claire, [producer] Elisa Argenzio and [head writer] Tim Pye. I hitched my wagon to some really great horses.”

If it hadn’t been for the persistence of Tonkin – who was then producer CJZ’s head of drama development and is now its head of drama – Lawless might never have taken on the role of Alexa Crowe, a former police detective who is reluctantly coaxed back into investigation work to help her former colleagues solve some of their trickier cases.

The executive had sent Lawless some scripts for the show and though she thought it was a good idea, she put them aside and forgot about them. Then when the actor was in Australia to attend Sydney Pride, Tonkin sought her out again.

“I didn’t think much would come of it but we met and she was just such a pocket dynamo,” says Lawless, a true-crime fan who feasts on the many books and podcasts the genre has to offer. “She presents like a charming wallflower; she’s happy to sit back but she is a Crouching Tiger, Hidden Dragon in the best possible way. I just saw so much unlimited potential in this woman and thought I was going to nab her for myself.

“I was really intrigued by it. And also, at this time in my life, I don’t want to be selling mayhem and destruction anymore. I’ve done quite a lot of it and I’m very attracted to justice. The world is pretty grim these days, so I want to give people a good time. I want to do something just because it’s fun and gorgeous, and we’re cleaning up the universe in a metaphorical way. It’s a beautiful thing to entertain just for the hell of it.”

Described as a contemporary murder mystery, My Life is Murder is a classic case-of-the-week crime drama featuring Lawless as Alexa, a complex, fearless and charismatic former cop who, despite some setbacks in her private life, can’t put down a good case when her help is called for. Through the series, her investigations take her across a picturesque Melbourne and into the worlds of male escorts, nightclub owners, high-flying business CEOs, celebrity chefs, clairvoyants and cosmetic surgeons.

Produced by CJZ and distributed by DCD Rights, the show marks Lawless’s first Australian lead. She previously had a part in Oz conspiracy thriller The Code and has also starred in US series such as Spartacus, Ash vs Evil Dead, Salem and Parks & Recreation.

“She is a sleuth but she’s a very perverse human being,” Lawless says of Alexa. “She’s not afraid to tell a lie to get to the truth. She’s apt to bend the truth, which is really fun.”

Alexa is assisted through the series by Madison Feliciano, a police data analyst played by Ebony Vagulins, and DI Kieran Hussey (Bernard Curry), who seeks unorthodox Alexa’s help when he becomes stumped by some unusual cases.

The show offers a glimmer of Alexa’s private life by suggesting in the first episode that she is still coming to terms with the death of her husband. But Lawless says the series never becomes maudlin. “You do see her in some quiet moments and when she’s alone, but she’s fortified. She has to rely on herself,” the actor says. “But she learns she’s not an island because these gorgeous people keep forcing themselves into her home and her heart and won’t leave her alone. They bring her back to life.”

Meanwhile, Lawless’s involvement in the project from the outset signals her significant role behind the scenes, with My Life is Murder also providing the star with her first executive producer credit.

She says it’s a “mind-bending” extension to her acting job that was fine in the beginning “but at the end, the wheels have come off and I’m just trying to not trip over my tongue because the words are completely mixed up in my head.”

“It’s a pretty intense acting workload but that’s great. It’s magnificent to be challenged at this time in my career because it could be really boring if all I was doing was acting.”

Lawless is also grateful to take on a character who can live without wearing a corset, having spent six years in Xena’s iconic get-up from 1995 to 2001.

“I just want my character to wear the same trousers,” she jokes. “Give me seven of the same pants; I don’t want to change for one scene and then for another. That is the most irritating part of my job, which is really a pretty good problem to have. But there was a lot of love going around the set, a lot of respect and care. I just couldn’t be happier. I’m very grateful.”

Having spent so much of her career working in the US and at home in New Zealand, where Xena was filmed and which largely follows the industry machinations of the US system, Lawless says she was particularly conscious of learning the ropes on an Australian set.

“Australia is it’s own ball of wax. It’s not like the UK and not like America,” she explains. “The way they structure a production – people have different jobs, and job titles don’t mean the same thing, so it’s about trying to understand the flow of information. Because we were doing it in such a rush, we were scrambling more than we would have liked. But that also gives an energy, and then something fabulous accidentally happens that might not have done had you been in more control.”

When Lawless says she’s fascinated by crime and justice, she really means it. Not satiated with books and podcasts, she can often be found in a courtroom watching events unfold, whether in New Zealand or while working abroad. The actor has attended hearings in New York and Louisiana, and even went to the bail hearing of Jeffrey Epstein, the billionaire sex offender.

“All human beings really like the idea of justice and finding the bad guy or girl. That’s just a human desire to protect the innocent and find justice for them,” she says. “What you learn about is the community you’re in. It’s largely about socioeconomics and how incidents of violence touch normal people’s lives. You learn about what poverty and abuse does to people.”

My Life is Murder treads a lighter path, however, with Lawless promising “the funnest romp through secret worlds.” She continues: “We go into these worlds that are opaque for most of us and get inside and solve a tasty little murder mystery in that juicy world.”

Between planting trees on her new farm and continual talk of a Xena reboot – “It would be fun to reprise it in some way. It ain’t dead yet” – the actor is also looking ahead to a potential season two of My Life is Murder. “I’m certainly thinking about it and always sending off bad ideas to the head writer,” she adds. “It’s on my mind.”