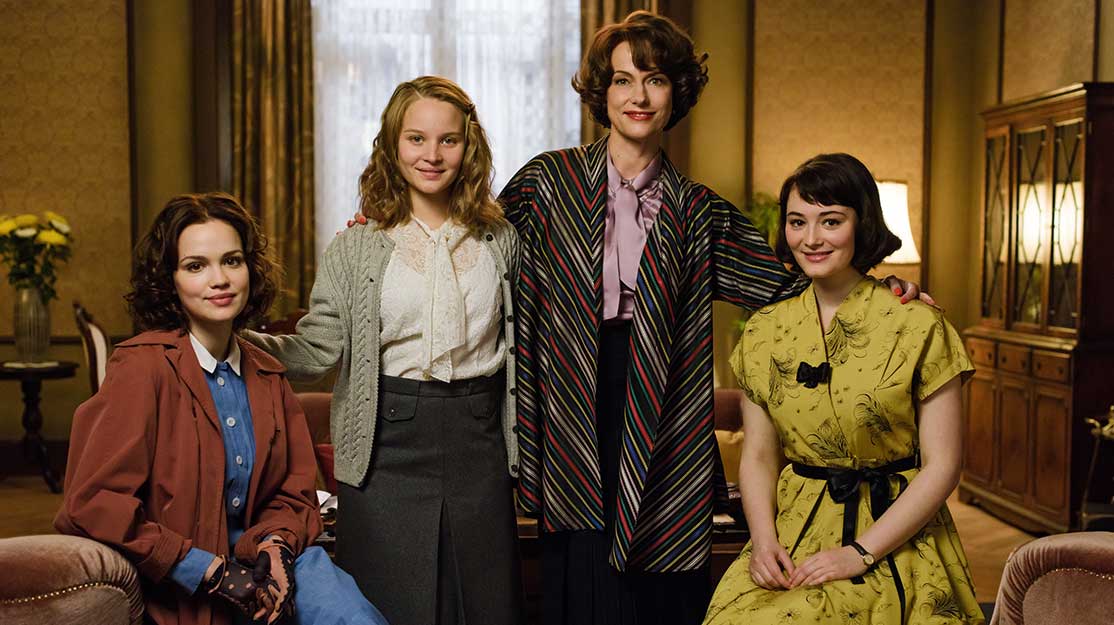 A tree-lined boulevard filled with shops, restaurants and hotels, Kurfürstendamm is described as the Champs-Élysées of Berlin.

Dating back to around 1542, the 3.5km-long avenue – known as Ku’damm – is now home to an array of fashion houses and boutiques. But in the 1920s, it was the burgeoning scene of many theatres, cafes and nightclubs.

It is also the setting for a new German period drama that has dancing at its heart.

Ku’damm 56 tells the story of Caterina Schöllack (Claudia Michelsen), a dance school owner who has three daughters, Helga, Eva and the rebellious Monika. When Monika tries to break free from her mother’s strict social conventions, she begins a search for female equality during a time when women are becoming increasingly unwilling to simply stand by their man.

Produced by UFA Fiction for German broadcaster ZDF, the three-part miniseries is written by Annette Hess and directed by Sven Bohse.

UFA Fiction has been enjoying success on the international stage with Second World War drama Generation War (Unsere Mütter, unsere Väter) and Cold War spy thriller Deutschland 83, which became the first German-language series to air in the US after it was picked up by SundanceTV. It has now been sold to 20 broadcasters and online platforms worldwide.

The production company’s latest story is set in 1956, between the events of those two shows, and focuses the changing role of women 11 years after the end of the Second World War.

Nico Hofmann, CEO of FremantleMedia-owned UFA, says: “This is the first time a show has focused on women and tells the story of sexual liberation in the 1950s completely from a female perspective.

“I think we will start a huge debate in Germany when it airs because this is a topic nobody has ever had on their agenda. It’s not just a dancing school adventure, it’s about society in those days. It’s very critical, very sharp, and how you deal with sex and how we were educated in those days is the key issue of the whole show.”

Alexander Coridass, president and CEO of ZDF Enterprises, which distributes the series internationally, continues: “It’s the beginning of the sexual revolution. Don’t forget 1956 is only 11 years after the war – even some prisoners of war had only just returned.

“Directly after the war, women had to take over the country. Then the men returned and they wanted to take up their old roles again. Partly, at least, I experienced that myself and it was extremely interesting. On one hand, women were pushed back slightly but they became aware they didn’t have to accept it. This clash of two cultures – pre-war society and the dawn of a new era – led to political and sexual liberation. That’s a unique, spicy, sometimes funny and sometimes dramatic mixture.”

Hofmann is no stranger to using his series to start debates, following the controversy that surrounded Generation War’s depiction of the Nazi era and the subsequent conflict. Now he hopes the story of women finding their way in post-war Germany will spark new discussions.

“It’s a huge topic in Germany,” he says. “It’s very unique because you had a situation where you can say modern Germany was founded by women. There were no men. It wasn’t the same situation as in France or the UK. You had a lot of POWs coming back 10 years later. There were six million men killed. It’s a female society.

“We had a very controversial debate over Generation War. We had a month-long debate in Germany – and in Poland as well. We will have the same with this show because it’s a topic that’s never been seen. I’m amazed no one has done it before.”

Beyond the role of women, Ku’damm 56 – which will likely be called Berlin 56 for international viewers – also offers an opportunity to look at other emerging trends of the era, such as new fashions and the rise of rock ‘n’ roll music.

“The fashion was great,” says Coridass. “It was conservative but stylish. At that time, the fashion and rock ‘n’ roll would still have been forbidden but, after the war, we were focused on other things. This was also the first sign of the rise of the German economy after the war. There are so many aspects that come together that we are pretty sure this will be a unique story.”

Hofmann adds: “It’s a very sharp and very critical portrait of society of those days. It’s not easy to watch. The most important thing about Annette’s script is the accuracy with which she’s portraying these women. It’s about our families, our mothers. A lot of it portrays my own mother in those days. It will have a similar impact to Generation War in terms of debate.”

While German drama has often looked back on its own history, Hofmann says the way these stories are told is now changing. “They’re moving away from kitsch and melodramatic structures and getting to a very sharp, analytical way of showing society,” he explains. “That’s why we’re proud of Deutschland 83 and Generation War, which have opened doors for me in other countries. It’s a game-changing moment for the industry in Germany. We’re now talking to (US cable channels) AMC and SundanceTV about new projects, and with Scandinavia, Italy and France about coproductions.”

In particular, Hofmann also says he plans to work more closely with Jens Richter, the CEO of distributor FremantleMedia International, and other drama producers within Fremantle’s production group.

“It’s the best time in my life,” he adds. “We have six shows on the way and made nearly €50m (US$57m) in revenues last year. We are having some very good conversations talking about what we’re doing after Deutschland 83 with SundanceTV.”

Other projects currently on UFA’s slate include three-part spy drama The Same Sky; Breaking News, about a war correspondent operating in Israel in the 1920s; and Hitler, an eight-hour biopic examining events from the Nazi leader’s rise to power to the Second World War. Based on the book Hitler’s First War by Thomas Weber, it has already been pre-sold to TF1 in France.

Another UFA drama, Nackt unter Wölfen (Naked Among Wolves), which tells the story of a three-year-old Jewish boy who is smuggled into the Buchenwald concentration camp in March 1945, has been sold by Global Screen to networks including SVT in Sweden, Spain’s TVE, DR in Denmark, Mediaset in Italy and KBS in South Korea.