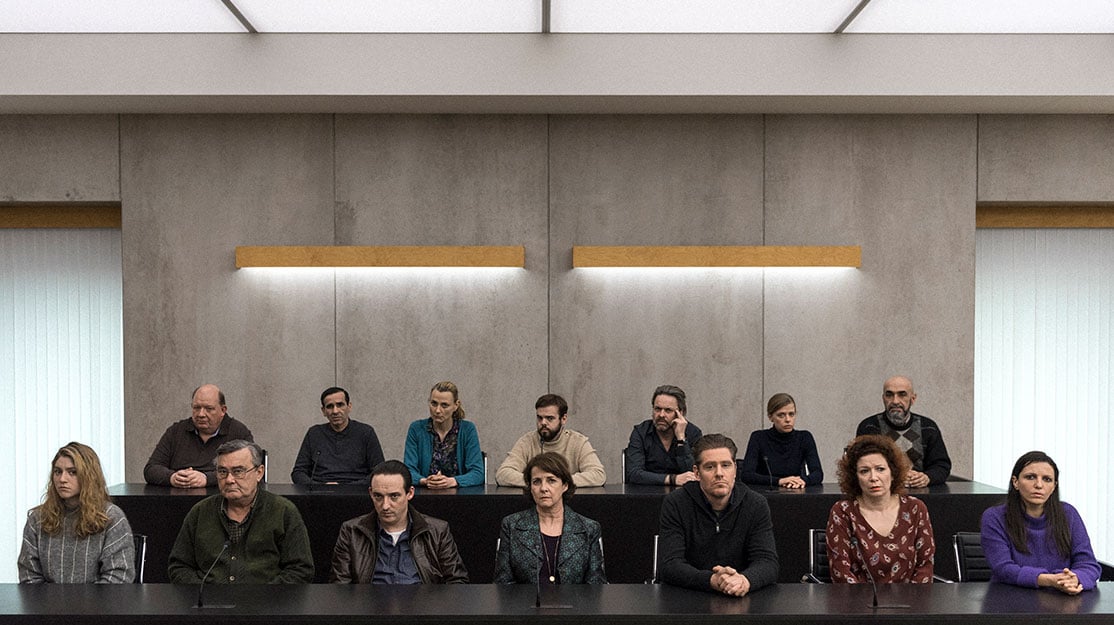 Flemish drama De Twaalf (The Twelve) presents a fresh twist on crime drama by exploring a court case from the viewpoint of the jury. DQ investigates the making of the series with producer Peter Bouckaert and co-writer Bert Van Dael.

The role of a jury in a criminal court is to determine the fate of the accused and whether they are guilty or innocent of the offences they have been accused of. But how the members of a jury collectively come to their decision – and how the case might affect their personal lives – is rarely explored, owing to differing rules around the world that can often mean jurors are forbidden from discussing the deliberation process and other parts of their experience.

Flemish drama De Twaalf (The Twelve) now aims to shed more light on the experience of those in court and examine how the issues they learn about might impact their own lives.

Described as a character-driven crime mystery, the 10-part series revolves around the jury for a murder trial, with respected headmistress Frida Palmers standing accused of a double killing. It follows several members of the jury – and others linked to the trial – as they face a difficult decision deciding her fate, while their own lives become affected by what they hear in court.

Commissioned by Belgian broadcaster Één and produced by Eyeworks Film, The Twelve comes from writers Bert Van Dael and Sanne Nuyens. The director is Wouter Bouvijn.

Development on the show began four years ago when Van Dael and Nuyens met producer Peter Bouckaert to discuss their idea for a crime drama centring on a jury. Having previously worked together on supernatural crime drama Hotel Beau Séjour, about a criminal investigation, they were keen to delve into the lives of jurors and discover how it feels to be an ordinary person who suddenly finds someone else’s fate in their hands.

The main perspective of the series then emerged when they began interviewing real-life jurors about their experiences. “What really struck us was when a woman told us she had a really dominant, jealous husband and, while on the jury, she started to see traits of her husband in the defendant. She was thinking that if she stayed with her husband, she might end up in the same position [as the victim in the case],” Van Dael says. “It was interesting for us to see how your private life may or may not affect your judgement. So we wanted to develop the private lives of these characters and see how they would judge a defendant.”

Though jurors are meant to remain impartial at all times, Bouckaert says the idea that their views will always be coloured by their own lives and experiences is key to the drama.

“We’re following people who were, by fate, selected for this trial. They go through a very intense experience together and get to know each other after being perfect strangers. The fact they are isolated in a bubble for three weeks makes them reflect on what’s happening in their own life, and that’s actually the core of the series,” he says.

“The series is a combination of a slice of quite universal characters coping with different things in life that are very recognisable for a lot of people, and a detective murder-mystery story. Through the eyes of the jury members, you hear all the testimonials, which constantly make you change your mind and make you doubt a lot of things. The combination of those two elements is what makes The Twelve stand out.”

After a year of intense research, Van Dael and Nuyens spent two years writing the scripts, which are based on a blend of research and their own personal experiences, leading to a mix of people from all walks of society coming together to sit on the jury. The characters are all introduced in episode one, while viewers will find out more about them across the whole series and eventually learn how their personal lives influence their behaviour within the deliberation room.

The writers also worked hard to balance the evidence, with prosecutors portraying the accused as a monster and her defence team pushing a different side to the story.

“In post-production, we always do an in-house test screening for some of our colleagues who have been working on other projects and don’t have the same knowledge of it, to see if they know what it’s about and everything’s clear,” Bouckaert explains. “So we did this test screening and, by the final episodes, everyone who had seen it was as divided as the jury.

“We do offer satisfaction in a quite original way in the last episode – not by presenting a white rabbit out of a hat. You see how the jury comes to a decision and how group dynamics work, and you understand why the decision is the only right decision. We also show what really happened.

“But, for us, it’s not about whether the jury makes the right decision. It’s about how 12 people who don’t know each other make the best possible judgement, which is a bit influenced by what happens in their personal lives.”

One early decision the writers had to make was whether they should tell the stories of all 12 jury members. They soon opted to focus on six, but found that trying to force the story into a predetermined format – looking at one juror each week, for example – wouldn’t work.

“At the end, we had a sense of what made The Twelve unique, but it was something we had to gradually discover for ourselves,” Van Dael explains. “It must feel natural, believable, emotional and also recognisable to people. Those were important words for us. In the editing process and in shooting, it was something we had to find. You didn’t always know why something didn’t work, but your gut instinct would say why it didn’t and we had to work around it.”

With the scripts in place, filming went like clockwork thanks to a strict schedule. “We couldn’t afford to not stick to the plan,” Bouckaert says. Keeping a balance between moving the court case forward while also learning something about a jury member was key to the production and was also an important consideration during the editing process. “It meant we didn’t stick to a fixed structure for each episode that we could repeat,” the producer continues. “Instead, it follows the flow of the characters and the crime story in a very natural way, keeping the balance between the different storylines and the complexities of the shoot, and those two elements came together in the editing process.”

During filming in the Belgian city of Ghent, the cast were left in the dark as to how the story would conclude and what verdict the jury would reach. To achieve that, the courtroom scenes weren’t recorded until the last two months of the six-month-long shoot, meaning all the deliberations came at the end, mirroring a real-life trial.

“That was a really good decision because, during filming, the actors really became their parts. So in the deliberation room, they were already their characters,” Van Dael recalls. “It was funny to see how they would argue over whether Frida did it or not, and they had all these clues. They disagreed and nobody knew the ending.”

While there are no current plans for a second season – The Twelve launches later this year in Belgium, with Federation Entertainment handling worldwide distribution – Bouckaert says a follow-up would most likely introduce new characters and a fresh murder case for them to deliberate over.

“It’s been a long ride. We have put a lot of effort and preparation into this series in the development and also in the shooting and post-production,” the producer adds. “There are a lot of characters and it’s a complex series to make. But we think we’ve managed to find a perfect balance between the very recognisable and universal personal stories of the jury members and the crime mystery. It’s what makes the show unique.”