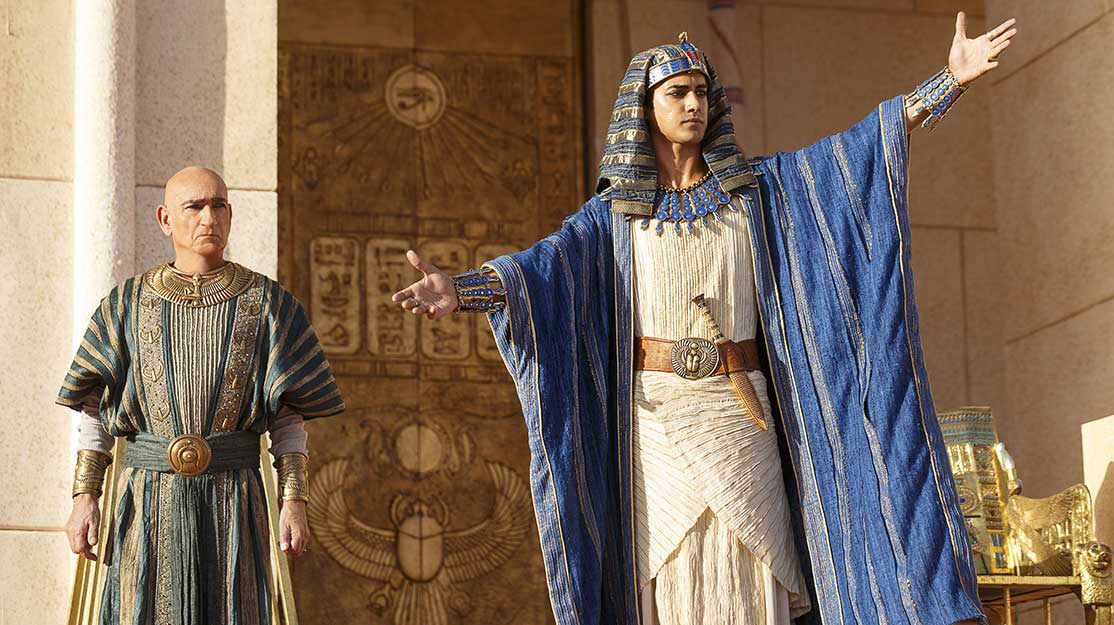 DQ editor Michael Pickard casts his eye over two very different Tutankhamun-focused shows heading for the small screen, with Spike TV spinning the story of the young ruler’s life and ITV tracking the discovery of his tomb.

As a subject for an epic television drama, the story of the Egyptian pharaoh Tutankhamun ticks all the right boxes.

Period costumes, exotic locations and the dramatisation of the trials and tribulations that met the boy pharaoh – he was around eight or nine when he ascended to the throne and 17 when he died – surely provide all the ingredients for an enthralling, absorbing saga.

That’s why it should come as no surprise that two series surrounding Tutankhamun are heading towards television screens.

The first, called Tut (main image), was unveiled as the marker for US cable channel Spike TV’s return to scripted programming. The six-hour miniseries, which will air across three nights from July 19, follows King Tut, played by Avan Jogia, and his closest adviser, Vizer Ay (Ben Kingsley).

The story revolves around Tut’s rise to power as the youngest ruler of Egypt and his struggle to lead Egypt to glory, while his closest advisers, friends and lovers scheme for their own nefarious interests.

Sibylla Deen, Alexander Siddig, Kylie Bunbury, Peter Gadiot, Iddo Goldberg and Nonso Anozie are also among the cast. The series is produced by Canada’s Muse Entertainment, with Channel 5 in the UK among the international broadcasters to have picked it up.

Others tying up deals for the show with Muse Distribution International include Discovery in Italy, SIC in Portugal and Sky in New Zealand.

The project had been in development at Muse since 2013, but was seen by Spike as a series that could relaunch it into the original drama arena.

At the time of the series pickup, in March 2014, Spike exec VP of original series Sharon Levy said: “We are thrilled to join forces with Muse Entertainment and this incredible writing team to bring the amazing story of one of history’s legendary leaders to life. Tut is the perfect addition to our slate of distinctive originals that appeal to a broad audience.”

Following in the footsteps of similar-subject movies released close together – think Deep Impact and Armageddon, or White House Down and Olympus Has Fallen – another series centred on Tutankhamun is heading to the small screen, this time in the UK.

ITV this week unveiled plans for an “epic and compelling” drama based on Howard Carter’s discovery of the boy king’s tomb. Four-part miniseries Tutankhamun, which will be written by Guy Burt (The Borgias), focuses on Carter himself – a solitary man on the edge of society who became an unlikely hero with his unprecedented and historic discovery.

The show will initially take viewers to 1905 as they meet Carter, an eminent British archaeologist who is leading an expedition through Egypt’s Valley of the Kings. But when tempers fray and the dig is put in jeopardy, his licence is revoked by Cairo’s Antiquities Service and he is forced to spend years on the outside, living rough and selling previously discovered archaeological relics to buy food.

However, a chance meeting with British aristocrat Lord Carnarvon leads to a change in Carter’s fortunes. The pair begin an unlikely friendship that in 1921 leads Carter to embark on a search for Tutankhamun’s final resting place.

Hopkinson, ITV Studios’ creative director of drama, says: “Howard Carter’s discovery of the lost tomb of Tutankhamun is legendary. His all-consuming, obsessive search for the tomb pushed his friendship with Lord Carnarvon to the brink, while the adventurous and extroverted aristocrat poured his inheritance into the excavation.”

Oldfield adds: “This is a fascinating and compelling story with real historical significance. It’s based on true events and reveals how Carter desperately tries to persuade his patron (Carnarvon) to continue to bankroll the excavation. Ultimately it’s the story of what happens when you stake everything on one last roll of the dice.”

“Tutankhamun is a story of epic proportions,” adds Steve November, ITV director of drama. “Against the backdrop of World War One, conflict, murder, corruption, romance and the unlikeliest of friendships, Tutankhamun sees Howard Carter’s determination pay off in spectacular style when he discovers one of the greatest archaeological treasures of the modern world.”

Scripted entertainment, whether on television or film, seems to throw up similar series or films with regularity, particularly around anniversaries, such as when two Titanic series – Titanic and Titanic: Blood and Steel – were produced to coincide with the centenary of the ship’s 1912 sinking.

In this case, however, it seems both ITV and Spike TV have landed shows that appear to offer viewers drama overflowing with plot and absorbing locations, telling complimentary stories that have rarely, if ever, been dramatised.

Fans of Egyptian history and the mythology around Tutankhamun can look forward to a televisual feast fit for a king.