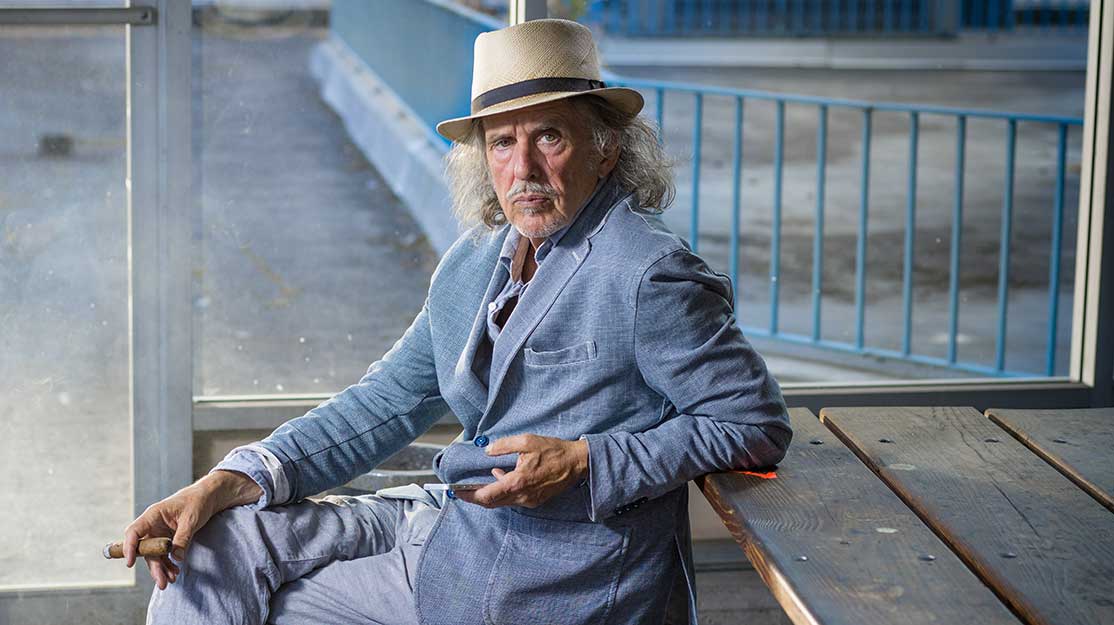 Turning the volume down

Seduction and espionage marry in Canadian thriller The Romeo Section. Showrunner Chris Haddock outlines the ‘quieter’ series’ origins and explains why showrunning is like a football match.

While spy dramas such as Homeland and 24 are filled with explosions, gunfire and high-speed car chases, The Romeo Section is decidedly more covert.

The Canadian drama follows a seasoned spymaster and academic who secretly manages a team of agents, known as Romeo and Juliet spies, who use their powers of seduction to extract secrets from state intelligence targets.

And creator and showrunner Chris Haddock, pictured above, says he intentionally decided to walk a different path to other noisier series when developing the show for Canadian pubcaster CBC.

“All you hear in Hollywood when pitching is ‘bring me a noisier show,’” Haddock says. “There’s so much of it and there’s so very little difference between one cast and another or the appearance of one show or another. My gut told me counter-intuitively I’m going to make the quieter show that everybody gets drawn to.

“We’re in a niche market now. You’re looking for the audience that loves that stuff, and people see the value in that. If you get a strong demographic behind you, a show can really grow and become a long-term success.”

The Romeo Section, which launched its 10-episode first season last October, is described as a taut thriller about espionage set in the Pacific Rim.

Filmed on location in Vancouver, where the story is set, the show slowly introduces viewers to the underside of a seemingly serene city that is exposed as a haven for international drug barons, fugitives and covert financiers.

The showrunner says he had been interested in the espionage genre for a while but was looking to create a new drama that didn’t follow the paths trodden by similar series already on air.

He explains: “I was thinking about espionage and reading about it, and the title of the show came from this guy who was head of the Stasi in East Germany during the Cold War who used to run what he called Romeo and Juliet spies – he’d run people over the border into West Germany and try to get them to cosy up to and get into intimate relationships with people in power or with the secretaries to people in power.

“The use of honey traps and seduction is a classic technique of intelligence-gathering and I thought there was something there that I could make into a show. I enjoyed pursuing the idea that the lead of this ensemble was also an academic at university because that’s also such a breeding ground for intelligence agents worldwide. They go after the smart kids at universities.”

The Romeo Section is not Haddock’s first foray into the world of espionage and informants, however. He previously created crime drama Intelligence, which aired on CBC for two seasons between 2006 and 2008, and says that audiences can relate to lots of themes integral to the spy genre.

“I enjoy people worming into other people’s heads in drama and trying to out-psych them, so there’s a lot of duplicity that relates to normal everyday human nature,” he says. “We all know what it’s like to hold secrets and to try to acquire information. It’s human nature to know that if you’ve got information, you’ve got a better chance of survival.

“The audience can relate to people withholding secrets from them, be it friends or partners, and they know what it’s like to be betrayed. People understand in their gut what it’s like to be sneaking around. There’s a direct connection with how we know people can be – they can be completely deceptive.”

But why the added element of seduction? Haddock says it can be used to “pry into the darker corners of the drama. I try to keep it parallel to real relationships where you make an advance, you seduce someone and it goes from there. And people know what that’s like. I thought it would be a really fruitful area. There’s lots of places you could go with it and I’ve got a great cast.”

Immediately prior to The Romeo Section, Haddock had been a writer on HBO’s prohibition-era series Boardwalk Empire, which was brought to life by showrunner Terence Winter and executive producer Martin Scorsese.

“That gave me the itch to do my own thing and create a show again because it can be very rewarding,” he says, having been approached by CBC to create a new series for the broadcaster after leaving 1920s Atlantic City behind. “So it was nice to have the broadcaster eager to work with me, rather than fighting uphill and convincing them that you know what you’re doing. It’s good to go back and work with people you have a successful history with because you can get through that early wariness of trust issues and creative freedom. They give me creative freedom, which is the holy grail for screenwriters and television writers.”

Working on Boardwalk Empire was something of a departure for Haddock, however, as it was the first time he wasn’t running the show that he was writing in more than 10 years. But he says he enjoyed the chance to sit back and watch someone else in the showrunner role – and when it came to The Romeo Section, he put some of the lessons he learnt as an observer into practice.

“One of the things I learnt was to make sure the scripts are out in time for the people you’ve hired to do their best work,” he says. “There’s no point in delivering a script three days into shooting it so they have no time to display their talents. It’s no joke. You have to get scripts out on time and that means you’ve got to get an efficient writers room.”

Haddock also aims to spend as much time as possible on set, rather than spending all his hours looking over scripts: “When starting a show, you want to get in there and make sure the actors are hitting the right spot. They may never see some of the other actors and might not know what the overall tone is, so I’m there saying you should do this or that. That’s how I bring it all together.

“Showrunners love just being in the writers room and the editing room – they get two shots at telling the story, in the script and the edit – but I’m writing it, I’m on set and sometimes directing. So I hire some of the best editors I’ve ever worked with and give them a chance to put a cut together because sometimes you’re too close to it and it’s important to have that trust and collaboration. Sometimes you’re blind because you work to close to the storyline and you might be missing it.”

While it’s clear that Haddock enjoys playing a part in all aspects of his shows – he also sits with the composer to discuss how the music for his shows is developed – he stresses that collaboration is also a key theme of any of his projects. And nowhere is that more important than in the writers room.

“The first phase is complete immersion in the subject, the story and the characters,” he explains. “We read as much as possible, swap sources and immerse ourselves in it until we can’t stand it. A writer might then sketch a scene we talked about. I try not to get hung up on writing a polished script very early because you’ve got to develop a structure that allows the characters freedom. You’ve got to make sure you’re not closing doors; I like to keep open the potential and possibility of where characters can go.”

On 10-part The Romeo Section, shooting began with five scripts in hand, allowing the writers the chance to react to any on-set chemistry or character development in the latter half of the season.

“It’s like being in a football game,” Haddock says. “You do all this prep but you’ve got to be able to react to what’s going on immediately and go with any openings and see if you can develop them. That’s the exciting part of the whole process. It’s a bit intimidating. I only threw up once this year, so that’s a good year!”

And as if he didn’t have enough to do, whether in the writers room, on set or in the editing suite, Haddock also likes to climb into the director’s chair.

“I enjoy the hell out of it,” he exclaims. “The challenge is finding the time to prep each episode and get out there with your location managers in the van looking around for the right location or one that fits the schedule. A lot of that is time-consuming and it steals me from other writing, but 10 scripts is an achievable number to be able to hold in your head and know where you’re going. The directing is very exciting and I did enjoy working with a bunch of actors I hadn’t worked with before. You never know what’s going to happen.”

The first season of The Romeo Section concluded in December last year, and CBC says no decision has been made yet on whether it will return for a second run.

But whether it’s with this show or another, it’s hard to imagine Haddock away from the TV spotlight for long.

“It’s exciting and exhausting but that’s the job and I’m happy to have it,” he adds. “This job allows you to keep all your interests in different crafts – music, design, costumes – and storytelling. It all feeds what I write because I’m learning about different ways stories are told. It’s a privilege of the job.”