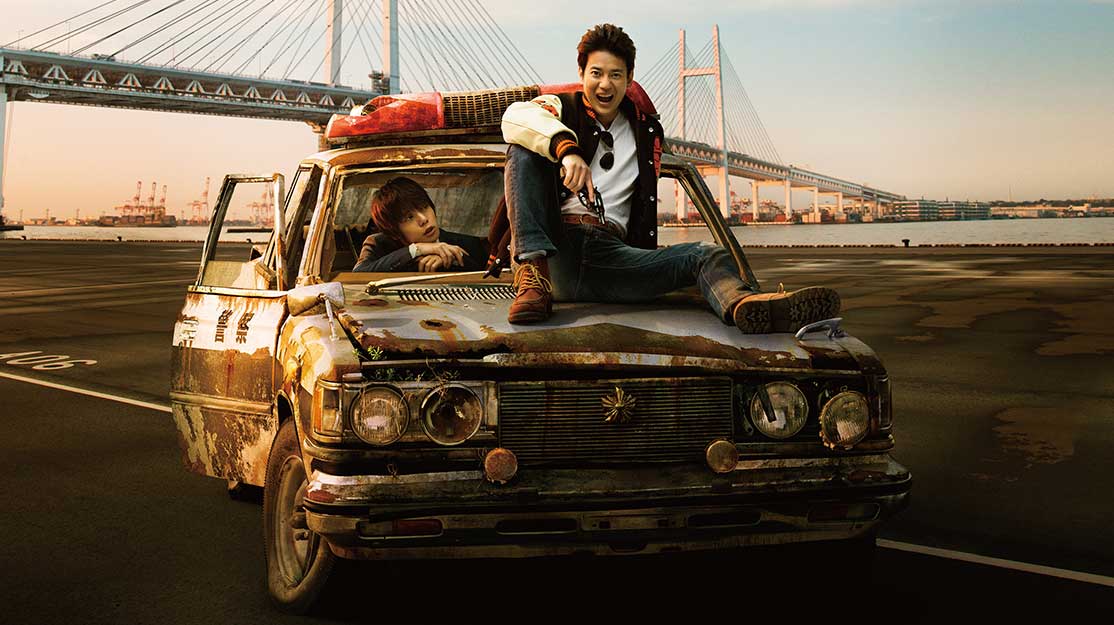 The Last Cop: How to go from German to Japanese

Michael Pickard speaks to the key players involved in the translation of German hit The Last Cop into Japanese.

With local versions produced in France and Estonia and a Russian adaptation in the works, German drama The Last Cop has proven to be a worldwide hit.

Originally produced by ITV Studios Germany for Sat.1, it tells the story of a policeman who ends up in a coma after being shot – and wakes up many years later in the present day.

Most recently it has been translated for Japanese audiences after Nippon TV and VoD platform Hulu Japan agreed a format deal with distributor Red Arrow International. The show debuted in June, achieving a 20.8% viewing share.

It stars acclaimed Japanese film star Toshiaki Karasawa as Kyogoku, the cop who has been comatose for 30 years. His partner is played by Masataka Kubota, with the cast also including Emi Wakui, Ichirota Miyakawa and Nozomi Sasaki.

Jamie I, Red Arrow International’s VP of sales for Asia Pacific, explains: “The Last Cop has been incredibly successful in Germany. It’s been running for five seasons in a Monday primetime slot. For that slot, it’s topped the channel average by more than 180%.”

But what makes this show a good fit for international remakes? I says the simple storyline can resonate well with audiences, particularly those in Asia.

“Given that TV audiences in Japan skew quite old, the format is perfect because it really evokes that nostalgia,” she says. “It’s perfect for the demographic. We have had a number of different versions. The French version is quite different from the German version, set later in the 1990s. It’s a bit more serious and more serialised. The German version is more procedural and a little bit tongue-in-cheek. There’s a humorous part to it with the fish-out-of-water storyline.”

Mikiko Nishiyama, senior director of international business at Nippon TV, says the broadcaster had worked with Red Arrow before so when the channel was looking for new dramas, the distributor was a natural partner.

“Two or three years ago, one of our producers was quite interested to look for new drama IP,” she recalls. “I took him to Red Arrow and they showed us some of the titles. One of them was The Last Cop. We liked it a lot but there wasn’t the atmosphere for remakes.

“Then when Hiroyuki Ueno (producer and manager at the programming division of Nippon TV) went to see Red Arrow at MipTV 2014, he also really liked The Last Cop. Then we brought it back to Japan and we started work.”

I then travelled to Japan several times to meet with production staff. “The legal side was quite complicated. It was really about timing and patience, but we got it done and the show looks fantastic,” she says.

“In Asia, local domestic drama is so strong, particularly in Japan, so it’s very unusual to have a European format in these territories. But it’s certainly an area that is opening up as broadcasters and production companies look for new ideas.

“They’re definitely more open to it, so we’re exploring that. On the back of The Last Cop Japan, we’re talking to broadcasters in Korea, Vietnam and India, and there’s also a lot of interest in the Japanese version in new territories.”

The simple premise of The Last Cop allows local broadcasters plenty of room to adapt it for local sensibilities. Ueno says he and his production team focused on how to characterise the cast, particularly the main character and his partner, for a Japanese audience.

“That was the most important point in creating the Japanese version,” he says. “The Japanese audience is not used to very serious or complicated drama, especially if it is new, so we had to make it easier to understand and easier to attract the audience. So we put a lot of comedy into the drama.

“The original The Last Cop focuses on the main character, but we made it more of a buddy series to get the audience into it and make it easier to understand. Also in the original, the main character wakes up after 17 years, but we changed it to 30 years, because in Japan 30 years ago it was a special time we call the ‘Bubble Age’ because the economy was very high but there were no computers, no smartphones.

It wasn’t just Nippon TV’s audience the producers had to consider, however. The Last Cop Japan was Hulu Japan’s first original drama, and the first coproduction between Nippon and Hulu Japan.

Ueno says: “After we aired it on terrestrial TV, it was delivered on Hulu. Hulu’s main target is men aged 20 to 30, so that’s why we put more action in it. But if we put too much in, women would not watch – so we made it very balanced.

“It’s very rare that we adapt foreign drama to make a Japanese version. Foreign drama has a lot of action. The original The Last Cop doesn’t have that many action scenes but everyone thinks foreign drama must have lots of action, so we added more.”

Hulu Japan launched in 2011 and is now owned by Nippon TV, making it an attractive coproduction partner. Earlier this year the service hit one million subscribers.

Kazufumi Nagasawa, chief content officer of HJ Holdings, which operates Hulu Japan, says The Last Cop has performed well on the back of its terrestrial run. The platform also picked up the original German version, Der letzte Bulle, in April.

“Anything that performs well on terrestrial will generally be successful on Hulu too,” he says. “Given the nature of the service, audiences are ready to follow serialised drama. Some customers are used to binge-watching using DVD rentals, but we have made it easier for them.

“The Last Cop has generated strong customer feedback. The drama is very well done, but it was also boosted by heavy promotion from Nippon TV. The combination of the quality of drama and the huge promotion delivered a great result for us. So we’re very willing to continue on that kind of project.”

Nishiyama says that if a broadcaster in Japan wants good ratings, it must have good dramas. This means targeting older demographics, as she says younger people are no longer watching live TV.

“They’re watching on catch-up or through their VoD systems,” she explains. “The main audience for the TV market is still around 40. So we have to target them to get good ratings – but at the same time we have to target the younger generation to get the VoD market. VoD platforms are doing very well with animation and variety shows, but drama is the most important thing.”

Nishiyama adds that while genre series like The Walking Dead might be popular online, terrestrial Japanese audiences prefer their drama rooted in real life.

“People like drama that’s more real life-based, not about zombies or space,” she says. “It’s more everyday-life drama that’s really important on terrestrial TV. It’s a very different market from Hollywood drama. From an international sales point of view, the Japanese like things based on Japanese life. That’s why everybody calls us the Galapagos market. Because the Japanese love their own life and customs.”

But on Hulu, 50% of content is taken from the US, Nagasawa reveals. “We have some European content, mainly from the BBC. The rest is domestic. Japanese drama is very strong in Japan and given that we are a subscription service, foreign drama is the main driver for customers. That’s not something you can watch for free.

“The Walking Dead is a title that gets the biggest number of customers because it’s not something you can watch on terrestrial TV.”

In the future, Ueno says he is looking for titles from the Nordic region or other countries that can follow in The Last Cop’s success and become Nippon’s next adapted drama.

“Ten or 20 years ago we did lots of foreign dramas on terrestrial TV,” he says. “We don’t do that much now, only late at night. So I’m looking for primetime series, and that means remakes.”