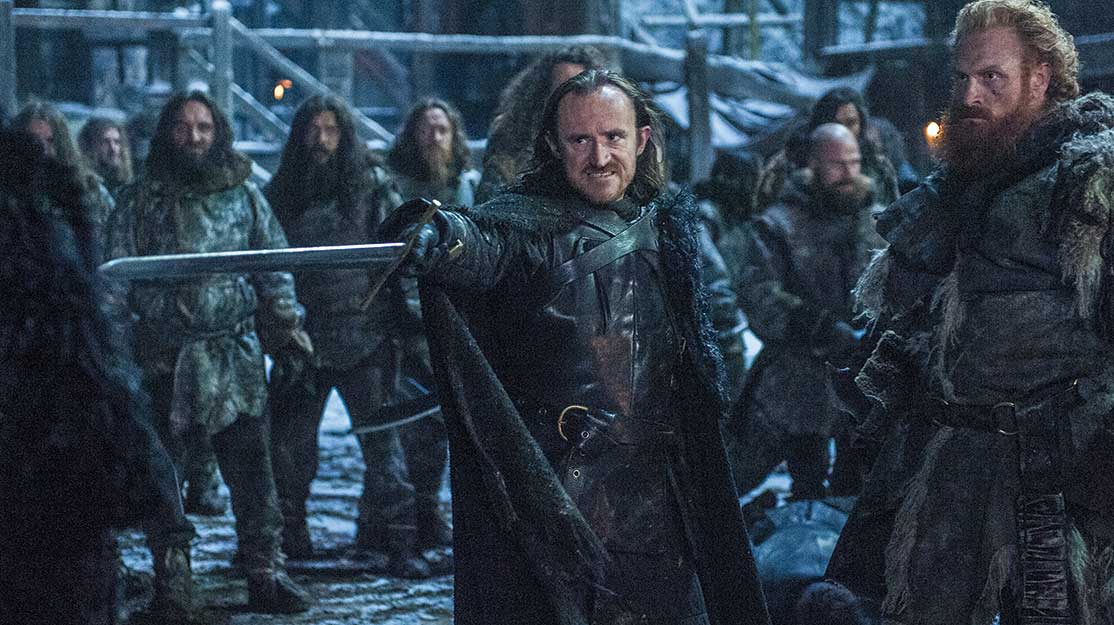 The Emmy Awards will celebrate the best creative work in television when the annual ceremony takes place over three nights this month. Three nominees tell DQ the story behind the work for which they were recognised.

Greg Middleton, Game of Thrones
Nominated for Outstanding Cinematography for a Single-Camera Series for the episode Home (season six, pictured above)
For the season six episodes I worked on – opener The Red Woman and episode two Home – I was paired with director Jeremy Podeswa. With Home, we tried to come up with a way to honour a slightly expected twist in the story of Jon Snow’s resurrection but not make it look like we were trying to pull the wool over people’s eyes.
We broke down the script based on the look and feel of each scene. There were a lot of different environments and a lot of time spent in Jon Snow’s office with the windows shut – we tried to keep the characters in the dark to create the moody look of a huddled cabal and to make the scene claustrophobic. We turned that atmosphere into something more mystical when priestess Melisandre brings Jon back to life.
We try to make scenes flow nicely – we scout locations in advance and put together a visual effects storyboard. We figure out the blocking and the use of sets. Unlike lots of drama shows, we have lots of different locations in different places. It takes some planning!
We drive the look and feel of a scene from the script. It also comes from the writers and showrunners. They encourage you to do your best possible work and to add something to every scene.

Every episode has its individual challenges. For the resurrection scenes, they included working in a small room, keeping things tense and interesting – and putting a fake Ghost (Jon Snow’s dire wolf) in there. We used a stuffed animal as a stand-in! We had to shoot the scene in multiple passes and the wolf was shot separately. These things are all very complicated.
In a separate scene depicting the death of Balon Greyjoy, we built a rope bridge between two parts of the Iron Islands castle. It took place in the middle of a storm – it was so windy on set that we had to light the scene completely differently. Most of the rain blowing around is real. It was a hilariously miserable experience for the actors but it looks fantastic. That was a tricky thing to figure out and to capture the real rain and the atmosphere.
I feel honoured to be part of the Game of Thrones team. Everyone has a huge amount of pride in it. It’s a totally unique experience. There are five films in production at the same time. All the departments, from special effects to costumes, art and armoury, are doing the kind of work you’d do for a two-hour film, but are making five in a row.

Martin Phipps, War and Peace
Nominated for Outstanding Music Composition for a Limited Series, Movie or Special
I was really proud of the War and Peace score. It was seven months’ work and was a labour of love for me.
Initially I passed on it because I’d done a lot of period drama and was doing more film at that stage. It just felt like such a big commitment – but the producers kept coming back to me and, after a while, I thought, ‘Who am I to turn down War and Peace?’ It was too tempting in the end.
I started quite early, which is a really positive thing for a composer. I began writing music while they were still filming. Tom Harper, the director, flew me out to Lithuania, where the show was being filmed, and I met him for breakfast each morning. We’d listen to Russian choral music, pop tracks – a whole variety of stuff just for us to cook up some basic ideas.
I really like putting new music against old pictures but you don’t want to jar the viewer too much or make them feel disorientated. I’m not interested in writing authentic period music. It’s really about trying to find an element in it that resonates, and for us it was the big choral stuff, the ‘Man Choir,’ as we called it. That just had Russia written all over it and had such an immediate connection. I took that and mixed it with very modern, driving synthesisers and guitars and other elements. It didn’t end up like a traditional Russian choral piece at all.

The choral stuff was a real starting point for us. I then did some orchestral sessions as well with the BBC Welsh National Orchestra. But I was really trying not to write conventional, not even authentic period music. I did it in two halves: I tried to write big, epic choral-driven pieces and then I went for very small, intimate, incredibly simple piano or just a solo voice. It was the big landscapes and the battles against the very small, emotional, intimate stories of the characters. I was trying to use the music to juxtapose between the two elements.
Music is such a brilliant fast track to emotion. It bypasses the verbal/visual thing. It can tap into the viewer’s psyche and emotions straightaway. That can be very powerful. For me, the music should add a new layer to the picture – something you might not have known was there but somehow makes sense when you hear it matched to the picture.

Michelle Dougherty, Marvel’s Jessica Jones and Vinyl
Nominated for both series for Outstanding Main Title Design
Jessica Jones creator Melissa Rosenberg was open to a lot of ideas for the main titles. She gave us the lowdown on the character – an investigator – and we thought it was natural to make the audience feel this sense of voyeurism, as that’s what she does, she’s a voyeur into people’s lives. We had this idea of having glimpses of information and using her point of view.
The painterly quality was inspired by David Mack’s artwork in the original Jessica Jones comic books. He worked on the sequence with us and painted some new elements for us. Then our designer, Arisu Kashiwagi, took all those paintings and some photographs and put them together to create a piece that felt true to the show. You also want to be a little abstract so you’re not rewatching the show in the main titles.

On Vinyl, we met with the creators and they gave us their take on it. We got to watch the first episode, which was so thrilling. It was shot beautifully and the story was amazing. We were trying to capture that feeling of when music moves you inside and we wanted to convey that in the title, like the first time you ever heard your favourite band.
The process varies with each sequence because sometimes they haven’t started shooting yet. We had already pitched our storyboards for Jessica Jones by the time we saw the first episode. After seeing it, you can then see if you were off on the colour pallet, but Melissa directed us nicely so we weren’t too far off.
Sometimes we’ll work with tracks of music and then the producers will come back with something they feel is right. With Jessica Jones, we had a rock track but they came back with something Shaun Callery, the show’s composer, created. It was so different from our idea but we loved it.
For Vinyl, we researched a lot of music from the time that maybe wasn’t so popular but that was really interesting to us. Then the musicians working on the series composed an amazing piece of music that was exactly what we wanted – something that weakens your soul.
When we’re talking to the creators, sometimes they want to use the titles to tell a back-story, to set a mood or a tone or to introduce a character. But sometimes they’re very open and want us to decide which way we think it should go.