The US still dominates drama exports, but in the last Hit & Miss column of the year we take a look at some of the new shows from other countries that have punched above their weight in 2015.

Australia
The Sydney Morning Herald has just named Gallipoli as the best Aussie drama of the year – and they’ve probably got it just about right. Although the lavish WW1 epic rated badly on Nine Network, it was a strongly scripted and well-acted show that has had some profile internationally thanks to Endemol Shine International. Gallipoli’s Aussie rivals this year included biopic Peter Allen: Not the Boy Next Door, multicultural drama The Principal and undead series Glitch. But probably the best of the bunch outside Gallipoli was The Secret River, Ruby Entertainment’s adaptation of Kate Grenville’s novel.

Canada
2015 was a decent year for Canadian-backed drama. The high point was epic miniseries The Book of Negroes, which was back by public broadcaster CBC and BET in the US. The story of escaped slaves returning to Africa via Nova Scotia pulled in 1.7 million viewers for the first episode, making it the highest-rated original drama for CBC since 1990. Another strong debutante in 2015 was sitcom Schitt’s Creek, which also aired on CBC. This show was sold internationally by ITV Studios Global Entertainment to countries including New Zealand.

China
Top of the pile in China this year has been The Journey of Flower, a love story based on the fantasy novel by Fresh Guo Guo. Broadcast from June to August, it told the story of Hu Qian Gu, a girl born with magical powers. At age 16, she becomes the disciple of Bai Zihua, an immortal in charge of a magical realm – and promptly falls in love with him. The series has aired internationally in markets such as Vietnam.

Denmark
At the forefront of the Nordic drama explosion, Denmark public broadcaster DR gave us series like The Killing and Borgen. In 2014/2015, it added the period drama 1864, which has sold to broadcasters including RTÉ Ireland, TV4 Sweden and Arte (France/Germany). Next up is Follow the Money, a thriller set in the world of economic crime. The show has been heavily trailed in 2015 but finally airs in early 2016. It has been picked up by BBC4 in the UK – a big fan of Scandinavian TV drama.

France
After the success of Spiral and The Returned, it was the turn of Witnesses to catch the international market’s attention. A noir thriller set in Northern France, the France 2 show was picked up by Channel 4 in the UK, NRK in Norway, RTBF in Belgium and RTL Crime in Germany. The series was produced by Paris-based Cinétévé and written and directed by Hervé Hadmar and Marc Hernoux, who were behind Les Oubliées (Forgotten Girls) for France 3 and Pigalle La Nuit for Canal+.

Germany
In terms of German drama, it’s impossible to look beyond UFA’s Cold War coming-of-age story Deutschland 83. The show aired on RTL in its domestic market and has been sold internationally to more than 20 territories by Fremantle Media International. Buyers have included Sundance in the US, Channel One Russia, TV4 in Scandinavia and Stan in Australia. UK VoD platform Walter Presents has also picked up the title.

Israel
Israeli spy series False Flag is continuing the good work done by previous drama titles such as Prisoners of War and In Treatment. In June 2015, the show was picked up by Fox International Channels for use in 127 countries worldwide. Fox is also adapting the series into English.

Italy
After Gomorrah forced the world to reappraise Italian drama, Wildside’s 1992 proved it was no fluke. The 10×60’ story of Italian corruption in the 1990s aired on Sky Italia before being picked up by the likes of Orange France, Canal Spain and Superchannel in Canada. In September, the show was also sold to Netflix by distributor Beta Film.

Korea
We looked at Korean drama a few months ago here. With the year over, the top show still looks like KBS’s The Producers, which aired in May and June. The story focuses on a group of young producers working in the variety department at KBS. It has sold to China, Japan, Thailand, Indonesia, Vietnam, Taiwan, Hong Kong and Kazakhstan, while digital streaming rights have been licensed to parts of Europe, the Middle East and North America. China’s online network Sohu paid US$2.4m for the show’s rights. 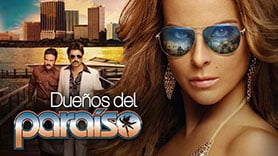 Latin America/Hispanic US
One of the hottest telenovelas of the year was Dueños Del Paraiso, starring Kate del Castillo, Adriana Barraza and Jorge Zabaleta. Created by Telemundo and TVN Chile, it tells the story of a woman who lives in poverty and whose ambition leads her to use drug trafficking as a means to become one of the most powerful women of her time.

Netherlands
The Netherlands is better known for its entertainment format exports than its drama. But it has given birth to series like Penoza, which was remade in the US as Red Widow. One of this year’s more interesting dramas was public broadcaster VPRO’s De Fractie, a politics-based series that combined fiction and current events. It did this by working as a fast turnaround production so that it could include new developments from the real world. A success at home, it’s the kind of project that could lend itself to international formatting.

Norway
Norway is starting to rival Sweden and Denmark when it comes to Nordic Noir series. This year’s big hit was Miso Films’ Acquitted, which tells the story of a man returning to his home town after a long absence – having been acquitted of murdering his girlfriend. A big hit for TV2, the show is distributed internationally by FremantleMedia International.

Spain
Spanish drama is going through its own golden age at the moment, with titles such as Grand Hotel, Velvet and The Time In Between. All of the above are period dramas, but this year the Spanish have shown that they are also pretty adept at making contemporary thrillers. A good example is Mediaset Espana’s miniseries Los Nuestros (Our Guys), which follows a mission to save two Spanish children kidnapped by a terrorist group while on holiday in Mali. Attracting 3.7 million viewers, it was one of the year’s strong performers and there is talk of a follow-up series. Another strong performer was Atresmedia’s Under Suspicion, in which a seven-year-old girl disappears from a small community, while Hierro won the copro series pitching competition at Berlinale. The latter will air in early 2016.

Sweden
If we were talking about returning series, then pick of the bunch would undoubtedly be the third season of The Bridge. But among new titles, ITV Studios Global Entertainment-distributed Jordskott is the year’s standout. A supernatural thriller from Sweden’s state broadcaster SVT, the show has been sold to ITV Encore in the UK and to broadcasters across Scandinavia. TV4’s Modus, distributed by FMI, is another new title that looks set to do well abroad.

Turkey
Turkey is such a prolific producer of drama that it’s hard to single out a particular title. But one show that merits a mention is Dirilis Ertugrul, better known as Resurrection. A period drama set in the 13th century, this was public broadcaster TRT’s response to fellow huge period hit Magnificent Century (aired on Show TV and Star TV). Resurrection (which debuted on December 10, 2014 and ran through 2015) did extremely well for TRT1, delivering ratings well ahead of the channel’s average. It has also been sold internationally to more than 20 territories. Also of note in 2015 was the launch of Magnificent Century sequel Kosem Sultan, which rated particularly well with the AB demographic.

UK
The Brits produced a lot of good drama this year but it’s hard to look beyond Golden Globe nominee Wolf Hall for the country’s outstanding scripted show of the year. Based on Hilary Mantel’s acclaimed novel, the show was a success for BBC2 in the UK and also aired on PBS in the US and Arte France, among others. Wolf Hall also sold in Scandinavia and features on BBC Worldwide channels in markets such as Australia.