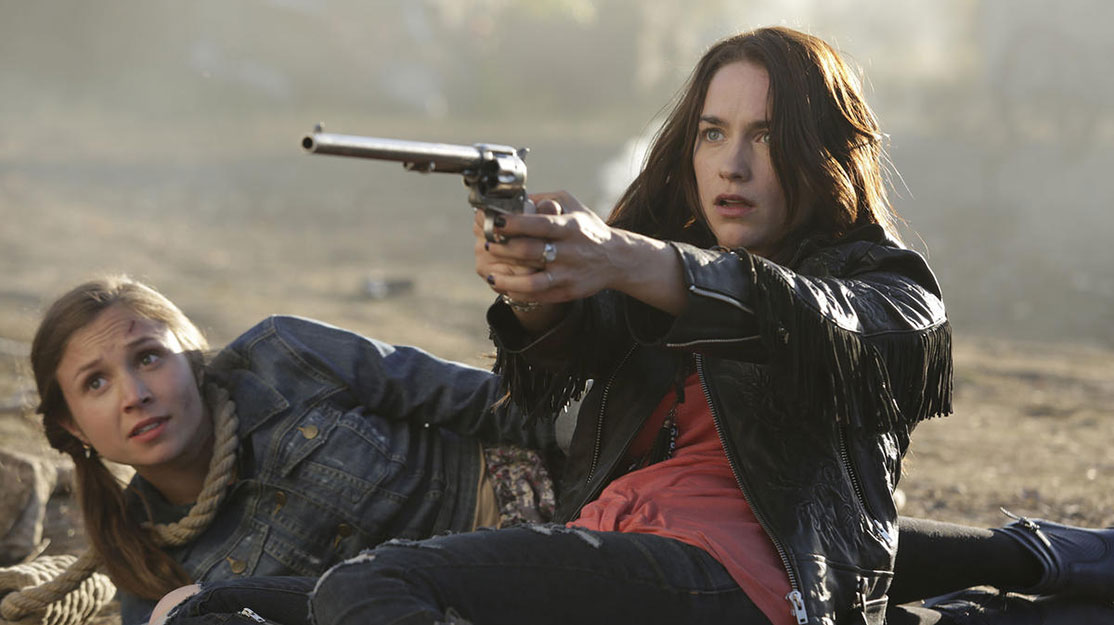 The will to Wyn

The supernatural meets the American Wild West in US comic book adaptation Wynonna Earp. DQ catches up with showrunner Emily Andras as she begins work on season two.

Wyatt Earp will forever have a place in US history as the gunslinger who took part in one of the most famous shootouts in the American Wild West – the Gunfight at the O.K. Corral.

Now Earp’s name and the classic western genre have been given a supernatural twist in Wynonna Earp, a 13-part drama described as mixture between Buffy the Vampire Slayer and Jessica Jones.

Based on the graphic novel by Beau Smith, it follows Earp’s descendant Wynonna as she battles demons and other beings that her famous relative killed years earlier and have now returned to seek revenge. A witty and wild modern-day shooter, Wynonna uses her unique abilities and the help of a dysfunctional posse of allies to bring paranormal foes to justice.

The series debuted on Syfy in the US and CHCH in Canada in April this year, drawing a band of cult followers who call themselves ‘Earpers’ and winning a second season, which was announced at San Diego Comic-Con earlier this month. It makes its UK premiere on Spike tonight.

“I was completely blown away by the response,” says showrunner Emily Andras. “It’s such a funny little concept of a show. I feel like it’s hard to buy into it because it’s so high-concept, weird and kinda wacky. So just the fact that people gave it a chance just blew my mind. I just hope we can do it all again in season two and make people happy.”

Andras has form in genre series, having previously written for and produced shows such as Killjoys and Lost Girl. And while she was a showrunner on the latter, Wynonna Earp is the first time she has created her own show.

Growing up in Alberta – “Canada’s Montana” – Andras has always been interested in reviving the western for television and says she got goosebumps when she first picked up the Wynonna Earp comic.

“If I could have cooked up something in the lab that spoke to everything I love to write about, Wynonna Earp would be it,” she admits. “It’s set in the west, it has a supernatural bent, is very witty and very funny, and most of all it has this really messed up, strong, insane female lead. She’s such a great character.

“It’s so crazy and I thought it would be fun to write something this unconventional. It just felt like a really good challenge. Now I feel like the comic and the series are working in tandem. I’m very close with Beau Smith and we feed off each other, which is great.”

Those familiar with the comic, however, will not see many of Smith’s original storylines adapted for the small screen. Andras says she enjoyed plenty of licence to bring fresh plotlines to the existing characters and setting, while also introducing some new faces.

“There’s such a huge different between those two mediums, between a 22-page comic where you can do anything and a 13-hour series,” she explains. “The stories are different but are certainly a nod to one another. That was fine. Beau and I know that’s how it works. They exist in the same world but they’re different stories. They’re complementary but they’re not exactly the same.”

The challenge of creating a show from scratch is “definitely the hardest thing I have ever done,” the writer admits. But she says that whether you’re running Game of Thrones or a lower-budget series such as Wynonna Earp, the secret to a successful genre series comes down to good storytelling and strong characters, rather than the special effects, monsters or creatures who provide the supernatural spark.

“The key is the audience has to fall in love with the people they’re spending time with,” she reveals. “Then that will help you if you have limited resources in other areas. It really comes down to good storytelling, like most things. And casting was super important. You have to find that special group of people that, when you put them together, it’s like lightning in a bottle. That’s really hard. I feel those are the two things I learned the most from previous gigs and I’m very happy with the results of Wynonna Earp.”

Heading the cast – and playing the eponymous heroine – is Canadian actress Melanie Scrofano, whose credits include The Listener and short-lived The Omen sequel Damien. Andras describes Scrofano as the perfect fit for the role, particularly in the way she balances the grittiness of the character with the witty dialogue that makes the show stand out from other genre fare.

“If you really like serious genre shows that take place on a very cold, blue-shaded spaceship with lots of serious stakes and no comedy, there’s lots of that out there. But lots of people work hard all day and come home and just want to have fun,” she says. “I’m really interested in shifts in tone. I love making you laugh and then I’m confident by the end of the episode I can have you in tears. I really like those challenges. I want you to feel like you’ve got your money’s worth by the end of the hour. It’s just a rocketing ride, we throw everything at you.”

Away from the writing process, other challenges on the show included the huge number of guns on set and dealing with the amount of gunfire a western typically demands, as well as some special-effects set pieces.

“We have a big supernatural creature at the end of the season and it’s always that delicious thing on set where the actors are just participating with green screen and are screaming and writhing and running from nothing,” Andras notes. “So you get into the edit suite and you think, ‘What is this actually going to look like?’ I was very impressed in particular with the special effects and what we were able to do on our budget, and creatively how we were able to solve problems. That was one of the things I’m most proud of.”

With Wynonna’s foundations in the pages of a comic book, style was also important when the show was first conceived. Director of photography Gavin Smith helped to recreate the visual tone of the graphic novel, making a deliberate attempt to make the series feel warmer than traditional westerns.

“We also really wanted to play with the idea of a modern western,” says Andras, adding: “This isn’t horses, this is motorbikes. But I had an absolutely incredible team of directors. I give some direction but, if you hire the best people, you need to let them do their best work. I really trust them and I’m not a director, so I’ve hired them to make me look good!”

And as a showrunner, Andrs says the most important part of her role is mapping out the storylines for the season and bringing them together in a way that will keep viewers enthralled.

“For me, it’s all about what the characters’ journey is going to be this year [and how to depict that] in the most fun way possible,” she says. “How can we show them changing and growing in a way that also involves flamethrowers and exploding heads if possible? It’s a combination of emotion and awesomeness. I really try to balance those things out.

“The show is an odd combination of episodic and serialised storytelling, but I like that. There’s the opportunity to do a ‘monster of the week’ but at the same time the relationships and the characters are changing over the course of the whole season. I just want people to come on board and know they’re going to have an awesome 42 minutes of television each week and, at the end of it, they’re going to feel something. And they can find me on social media if they have opinions about it!”

The appetite among fans on social media has played an important role in Wynonna Earp’s success and, Andras believes, in winning a second season: “I have never seen fan engagement like this on any show I’ve been a part of. The enthusiasm and passion of this particular fanbase – they call themselves The Earpers – is a huge part of why the show is such a success and definitely part of the reason why we are going for a second season. They made themselves heard on social media and it became too difficult to ignore them.”

Andras will begin prepping season two within the next few weeks, with production on the next 10 episodes likely to start towards the end of autumn for a 2017 release.

“I still can’t believe we got this on the air – don’t tell them!” she jokes. “Somehow we’ve got this crazy, demon-hunting cowgirl show on the air and it’s become a hit. It’s the little show that could. That’s one of the benefits of the audience being so open-minded. It’s peak TV right now – there’s something for everybody and I feel like there’s a place for you to take chances and try something new. Wynonna Earp definitely fits that bill.”