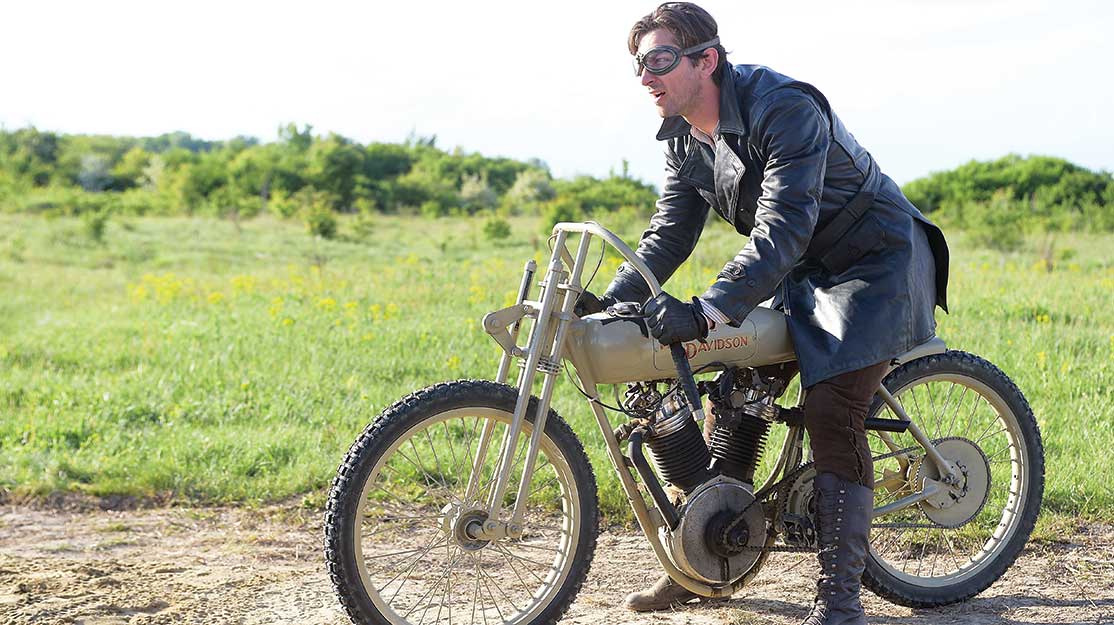 Since it was founded more than 100 years ago, Harley-Davidson has cemented its reputation as one of the world’s most iconic brands.

Now the story of how the world-famous motorcycle company came into existence – set against the backdrop of social and technological change – is being retold for US cable channel Discovery.

Harley and the Davidsons recalls how three friends from Milwaukee, William ‘Bill’ Harley (Robert Aramayo) and Arthur and Walter Davidson (Bug Hall and Michiel Huisman), risked their entire fortune and livelihood to launch the budding enterprise.

In particular, it was Walter’s ferocious ambition that propelled him to become a top motorcycle racer – and help put Harley-Davidson on the map – while competing in the deadly motordrome competitions sweeping the US.

Produced by Raw TV, the six-hour series launched last night on Discovery in the US and will air around the world from this month. The executive producers are Ciaran Donnelly, Raw’s Dimitri Doganis, and John Goldwyn, the channel’s executive producer of drama.

Like Discovery, Raw is best known for its factual and documentary programming but both firms are stepping further into drama. The network’s first scripted miniseries was 2014’s Klondike, set during the Gold Rush of the 1890s, while Raw has produced single dramas such as Cyberbully and Blackout.

But while some ideas naturally fit factual formats, Doganis says it was clear the story behind the birth of Harley-Davidson would be best told as a drama, with Evan Wright, Seth Fisher and Nick Schenk on scriptwriting duties.

“It’s one of those stories someone tells you and you can’t believe no one has told it before,” Doganis explains. “It lends itself so well to dramatic retelling; it’s full of rich characters and has enough conflict to fill a great drama series. But the early struggle in the scripting process for both producers and writers was deciding what to leave out.

“The series spans 30 years of history, which not only takes in the rise of a blue-collar family business from the Midwest but also what happens in a period of huge change in the world. The First World War and the Depression take place in that time period but those events become the backdrop and what you’re left with is compelling characters and their conflicts.”

Harley-Davidson was founded by Harley and the Davidson brothers in 1903 in Milwaukee, where the company is still based. So for the series, researchers travelled to its headquarters to study the archives, while every book on its history was studied from cover to cover.

“We talk a lot about the men behind Harley-Davidson as a rock band,” notes Doganis. “Without one of them, the whole thing would have crumbled – so each one of them was critical to its success, but they were often in conflict with each other.

“The research revealed clear moments of critical decision making and turning points in the history of the individuals and the company. The differences and the conflict between the characters at the heart of the company are what made the story so compelling.”

Goldwyn believes Harley and the Davidsons is exactly the type of scripted programme that dedicated viewers of reality and factual television will take to.

“At its core, this is very much based on the truth,” the former Dexter producer explains. “For the audience that’s going to watch this show, particularly the dedicated Harley viewers who own the bikes, Harley-Davidson is a culture. They are loyal to the brand and the company. They are acolytes and don’t want to see something they revere in any way transgressed. So we worked very hard to make sure even when we were changing the facts, we were not changing in any way the spirit of the accomplishment.”

Doganis picks up: “The series is very much adorned in real history. There are inevitably gaps in what we can know that we have had to fill in, but creatively all the critical points are things we know or believe to be true. Where there has been some levity is with the order of events and the geography.”

Accuracy was also key in terms of the races and the replica motorcycles, which were manufactured in South Africa and based on original designs. The series culminates with the launch of the classic Knucklehead bike in 1936.

“We had to create a lot of very accurate motorcycles from 100 years ago that could be raced and crashed and used in a variety of different situations,” explains Doganis. “That was extremely challenging. The whole series came together very quickly, and building those bikes and getting them historically correct meant building more than 50 motorcycles from scratch to take us through the different periods.

“And it was not just Harley-Davidson but Indian, Excelsior and other iconic motorcycles. That was a huge endeavour and involved designing from the ground up.”

Shooting took place across 12 weeks this spring in Romania, where early 20th century America, which was still largely rural, could be easily replicated.

“One of the things we follow over the course of the show is the evolution of Milwaukee from what feels like a pastoral town into a burgeoning city,” Goldwyn says. “We were able to achieve this with the production design. The other thing was making sure the bikes looked, felt and sounded like the real thing.”

The producers were clear that Harley and the Davidsons shouldn’t simply be a biopic of the company – and for Donnelly, who directed episodes one and three, this meant blending the excitement of the motorcycles with the human elements of the story.

“I wanted to know the men behind the machines and something about their lives and the world they lived in,” he says. “I also wanted to bring the story to the audience in a visual, visceral and cinematic way, in terms of establishing where the characters live and work and making the racing as exciting as possible. I wanted to get the audience onto the seat of the motorcycles as much as possible.”

Unsurprisingly, it was Walter Davidson’s race sequences that proved the most challenging for Donnelly and Stephen Kay, who steered episode two. They used aerial positions and fast-moving cameras to capture the actors recreating the motordrome races on circular tracks not dissimilar to cycling velodromes.

“They went around these tracks racing at 100mph and back in the day they didn’t even have brakes,” Donnelly says. “It was intensely dangerous and intensely exciting. One of the big things I brought to the show was a desire to firmly get into the world of motordrome racing.

“It was a big challenge from a design and creative point of view. Luckily, in Bucharest there was a velodrome so we built a drome on that. On screen, 70% of the action is real and 30% is CGI building up the stands. But we built all the motorcycles from scratch. It’s quite mind-blowing.”

Goldwyn, who describes the race sequences as “extraordinary,” says his ultimate aim is for viewers to be immersed into the story and the world in which Harley-Davidson was born.

Doganis concludes: “The great thing about the story of Harley-Davidson is you think you know a bit about the people or the objects, but you couldn’t make up the detail and incredible struggle and extraordinary conflict and creation they had to come up with. It’s one of those times where the true story is more satisfying than fiction.”