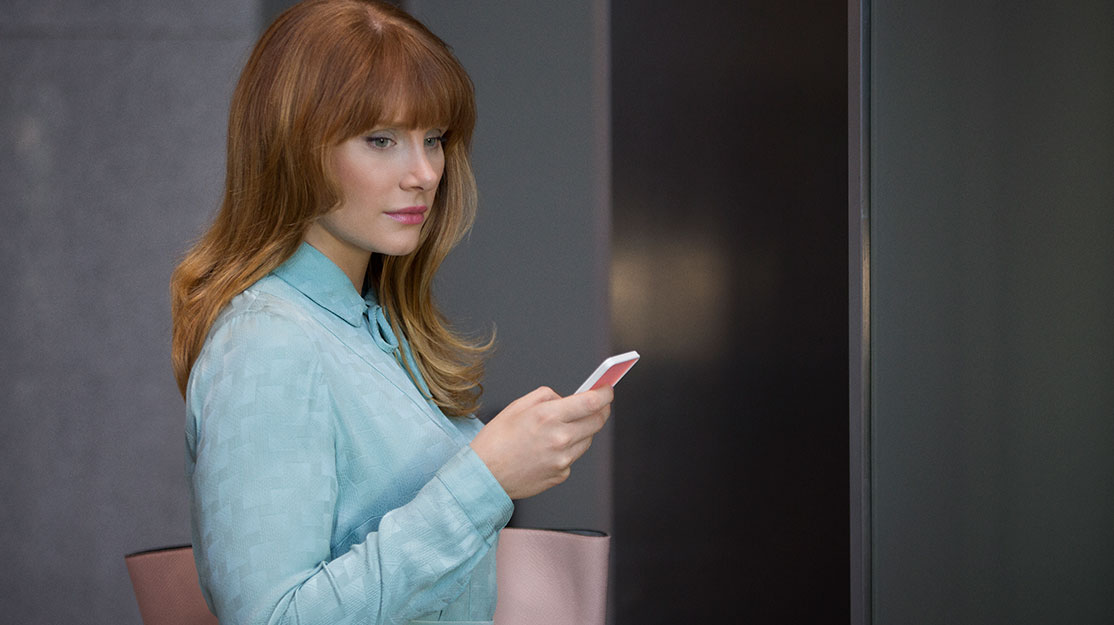 Charlie Brooker’s Black Mirror has found a new home on Netflix. Can viewers expect more of the same from the dark anthology, or does the new platform mean it’s all change?

The fact that the first face you see in the opening episode belongs to Hollywood’s own Bryce Dallas Howard (pictured above) perhaps tells you all you need to know about the return of Black Mirror.

Having aired for two three-episode seasons and a Christmas special on the UK’s Channel 4, Charlie Brooker’s dystopian anthology series is now exclusive to Netflix, with a bumper run of six episodes landing on the US-based streamer today.

The move to Netflix means a bigger budget for Brooker and co to play with, and this is visible from the off.

But for the team behind Black Mirror, the biggest difference has been the increased freedom offered by the show’s new home.

“Anthology shows like this have been waiting for a platform like Netflix to come along,” says creator and exec producer Brooker. “We don’t have cliffhangers; we don’t have recurring cast members or characters. Shows that reinvent themselves every week have struggled in the ratings.

“On Netflix we can put the whole thing up and it’s kind of like a short story collection. We have effectively got a bigger canvas and we’re not constrained by ad breaks or running times. One of our episodes, Hated in the Nation, is kind of a Black Mirror Scandi noir. It’s 90 minutes – it’s like a movie! We could do two-hour episodes or two-minute episodes.”

Fellow exec producer Annabel Jones echoes Brooker’s sentiment. “Netflix loved the show and stepped in to commission six films. That allowed us to play out on a bigger campus, take more risks and explore more worlds without destabilising the Black Mirror sensibility. It’s great, and we’ve got another season coming up too,” she says, referring to the six further episodes due on Netflix next year.

In addition to the acting talent, there’s also a more Hollywood feel behind the camera following the Netflix move. One episode, Brooker reveals, was scored by celebrated feature film composer Clint Mansell (Requiem for a Dream, Moon), while episodes two and three were directed by Dan Trachtenberg (10 Cloverfield Lane) and James Watkins (The Woman in Black) respectively.

Helming Nosedive was Joe Wright (Pan), who was already a fan of Black Mirror’s aesthetic before coming on board. “Be Right Back [season two] was one of the most exquisitely shot episodes, and so was Entire History of You [season one],” he says. “They’ve all been very cinematic; they’ve all been beautiful.”

Brooker admits to giving little visual direction in his scripts, and is full of praise for the ability of directors such as Wright to bring his words to life. “Often what happens is we’ve got a script, but what’s not in the script is the whole visual layer. That wasn’t really described at all in the Nosedive script,” he says.

“Joe gave it a level of artistry that is frankly embarrassing. When I first saw the rushes, I thought, ‘This is either going to work or this is mental.’ As soon as I saw it all come together, I was flabbergasted. It was the best possible outcome.”

Black Mirror’s move to its new home didn’t come without ruffling a few feathers, however. In August, Channel 4 chief creative officer Jay Hunt criticised producer Endemol Shine Group and the show’s creators for a perceived lack of loyalty to her network.

But Brooker fails to see what all the fuss is about. “It’s quite interesting, let’s put it that way,” he says of the suggestion of bad blood after the deal. “Somebody didn’t come out and wave a cheque and we ran away from Channel 4 towards it. It’s been interesting watching that play out. We still talk to Channel 4 – we’re still friends!”

Leaving the Netflix move and its implications aside, does the new Black Mirror stay true to the show that built a cult following with its nightmarish visions centred on Western society’s ever-increasing reliance upon and obsession with technology?

While the short answer seems to be yes, with Black Mirror continuing to focus on the same themes, Brooker highlights a deliberate move towards “more variety of tone” in the new season.

Indeed, while maintaining Black Mirror’s trademark frighteningly believable vision of a world gone a little bit madder, Nosedive stands apart from older episodes thanks to its heavy dose of comedy.

Brooker adds: “This season we were almost imagining we were creating different-genre mini-movies. Nosedive is a kind of poignant satire. We’ve also got a detective movie, an outright horror movie, one is a romance… they’re so different.”

While anthology shows that reset with new stories and characters each season have become increasingly popular in recent years (True Detective, American Horror Story), anthologies like Black Mirror, which does this every episode, are much less common.

One of the most famous examples of such a series is The Twilight Zone, which first aired in 1959 and is cited by Brooker as a major inspiration for Black Mirror.

“I’d always loved shows like The Twilight Zone, Tales of the Unexpected and all the weird and wonderful one-off plays that the BBC used to put on,” he explains.
“It felt like those kind of ‘what the fuck?’ stories didn’t have a place on television anymore.

“Primarily, the intention was to create a show that gave you that frisson you get when you watch something like The Wicker Man, a particularly nasty episode of The Twilight Zone, or [BBC’s 1984 nuclear winter drama] Threads – anything that provokes a strong reaction in people.”

Brooker’s earlier TV writing credits were for comedies such as Brass Eye, The 11 O’Clock Show and Nathan Barley, which he co-created. And perhaps surprisingly, he believes writing dystopian drama requires a similar skillset. “It’s kind of therapeutic – it uses the same kind of muscle as in comedy writing,” he explains. “A lot of our stories are about the worst-case scenario unfolding, which is the same as in something like Fawlty Towers. We know we’ve got a good idea if I’m laughing and Annabel’s going, ‘That’s horrible.’”

So, as someone who is now best known for cautionary tales about the rise of technology, does Brooker truly fear for our future?

“I’m quite optimistic about technology, actually, which you wouldn’t get from the show,” he says. “I like video games. I’m an early adopter of stupid electric toothbrushes and that sort of nonsense.”

If not all-powerful tech, perhaps something else will herald the end of days? Brooker concludes: “If you’d told me at the start of the year that, by October, half our cultural icons would be dead, we’d have voted to leave the EU, Donald Trump would be hovering near the White House – oh, and The Great British Bake Off won’t even be on BBC1 anymore, I’d be digging a fucking bunker!”