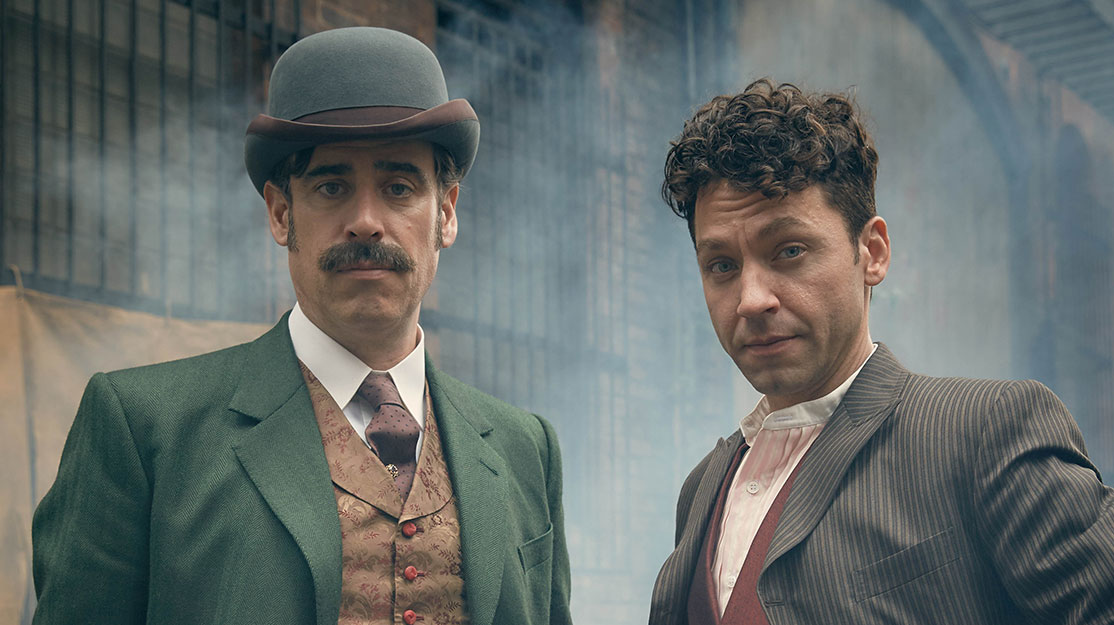 While Houdini & Doyle represents the increasing globalisation of television drama, there’s familiarity for viewers in this new supernatural crime drama.

Commissioned by ITV in the UK, the series has a strong international footprint. It was produced by British indie Big Talk Productions and Canada’s Shaftesbury, while filming took place in Manchester, Liverpool and Toronto. It will also air in Canada on Global and on US network Fox, with Sony Pictures Television distributing.

And audiences tuning in on both sides of the Atlantic can look forward to a show described as “the Edwardian X-Files,” which unites real-life friends and adversaries author Arthur Conan Doyle and illusionist Harry Houdini as a pair of crime solvers in early 20th century England.

But while Sherlock Holmes author Doyle, played by Stephen Mangan (pictured left above), is a passionate believer in the paranormal, Houdini (Six Feet Under’s Michael Weston, alongside Mangan above) refuses to believe in the supernatural, leading them into conflict and competition as they help Scotland Yard solve some bizarre and inexplicable crimes.

Showrunner Hoselton says: “It was a setup that seemed almost too good to be true: the real-life friendship between Sherlock Holmes’ creator and the great magician, bonded by a mutual interest in the paranormal. And most intriguing of all was the fact they were on unexpected sides of the debate, for one would assume Doyle to be the sceptic and Houdini the believer, but it was quite the opposite.”

The drama does take some “artistic licence” with history, however. The two men were already past middle age when they met in real life, but the series moves their friendship back 20 years to 1901, which Hoselton says is the ideal time for viewers to meet the characters.

“A new century, a new king, a new era chock-a-block with new ideas,” he says of the show’s setting. “In a highly unpopular move, Doyle had killed off Holmes to devote more time to ‘weightier work,’ and Houdini was at the apex of his career as the highest-paid performer in the world.”

The pair are grounded by constable Adelaide Stratton (played by Rebecca Liddiard), the UK’s first female police officer, who is based on a real person and provides a window into an evolving world 17 years before women got the vote.

Hostler adds: “Armed with equal parts scepticism, hope and humour, this trio felt like the perfect group to explore the world of the supernatural – and if they happen to raise a few profound questions in the process, all the better.”

Mangan, best known for his role in comedy Episodes, admits he agreed to take part in Houdini & Doyle after discovering David Shore was involved in the project.

“You can never guarantee anything will be a success,” he explains. “But if the person at the top of the tree knows what they’re doing then it certainly helps. So when I found out that person was David, it was a very simple decision. I read a couple of scripts and agreed to do it.”

The British actor, who describes the series as “the Edwardian X-Files,” continues: “Not every single crime is explained. It would be a little dull if that were the case. As much as I love Scooby Doo, as a crime drama it starts to get a little bit predictable after a while. And you don’t want that. What I love about this show is that every episode is written by a different person and they all have very different feelings.”

Weston was also drawn to the project by Shore’s involvement, having previously appeared in House. “It’s such a unique idea, set in this period time of these two epic figures,” he says. “And they’ve done it with such wit, humour and humanity. Yet it’s this great adventure and procedural at the same time.”

Accepting their parts meant Mangan and Weston were jumping into the deep end – literally, as the opening scene finds the pair up to their necks in a cellar as water rises around them. The stunt was filmed using a shipping container filled with water in a Manchester car park, though the container had to be reinforced to stop the sides collapsing due to the weight of the water.

“It was really intense, but fun,” says Weston. “We have incredible wardrobe and set departments that build these extravagant things. They built this set for us and we were in water for hours and hours.

“They were raising the level gradually and let us go right to the point of real danger. We always want to make it look real and feel real. So we will do it as close as we can. We really were gasping for air and happy when it was all over. But it was awesome fun. You get a little adrenaline rush.”

Mangan continues: “That’s one of the few stunts I do. Michael does most of them – he was suspended upside down in a straightjacket and lowered into a tube of water. He’s always leaping around while I’m typing at a typewriter.”

The series debuts on ITV and pay TV channel ITV Encore on March 13, before rolling out on Global and Fox on May 2.

But despite Houdini & Doyle’s supernatural flavour, Mangan says the appeal for viewers will be the familiarity of its case-of-the-week procedural structure.

“There’s a reason why there are so many crime dramas around, and it’s because they hook you in,” he adds. “You just want to know whodunnit. But at the same time there is a variety in each show. Each episode is like a self-contained film all on its own plus a double act. Again, a classic formula – two very different blokes. I think they have fallen upon two fascinating characters in Houdini and Doyle. It’s exciting, compelling and funny – and a real bonanza for anyone turned on by moustaches.”