The kids (writers) are alright

It’s easy to dismiss kids’ and teen drama as being somehow inferior to adult drama, but the English-speaking market has produced a steady stream of shows that hit the highest standards of creativity in terms of writing, direction and production.

At the younger end of the spectrum, we’ve seen series like Nickelodeon’s iCarly, a sparkling piece of drama from the Dan Schneider stable. For older teens, there have been shows like Skins and Misfits, which beautifully encapsulate adolescent rebellion. In between there have been dozens of great shows ranging from H2O: Just Add Water to Degrassi, still going after 15 years.

The value of such shows depends on where they fall in the demographic spectrum. But basically there are two potential benefits. First, they can reach an audience that is supposedly disenchanted with longform television. This means they can then be nurtured through to adult shows. Second, the best examples encourage co-viewing between parents and kids, something broadcasters love because it’s a characteristic they can sell to advertisers.

The continued appeal of such shows is underlined by the fact that SVoD platform Netflix has just commissioned indie producer Lime Pictures (Hollyoaks) to make a 10-part series aimed at tweens. As yet untitled, the “Horse Mystery project” is a coming-of-age story about an American teenager, Zoe, and her summer of intrigue in the British countryside. It is in production in Cheshire, England, and will then move to Anglesey, Wales, later this year.

Set on a beautiful island off the coast of Britain, the show sees 15-year-old Zoe’s life change during her stay at Bright Field Stables when she meets a horse called Raven. The show, which will be available on Netflix globally in 2017, is based on an original idea created and written by Anna McCleery and Vicki Lutas.

The big break for both McCleery and Lutas was another teen drama called The Cut, which launched in 2009. An unusual experiment, it was aired daily on the internet in five-minute chunks and then in consolidated 25-minute episodes on TV. McCleery then worked on Hollyoaks before the two were reunited for the new series.

Commenting on the show, Lime head of scripted drama Rebecca Hodgson said: “Anna and Vicki have a uniquely quirky and warm voice which lights up the characters and world of the show. We have assembled a fabulous cast and crew and our locations are gorgeous. I couldn’t be prouder.”

Below we highlight the best of the current kids/tween shows and their writers: 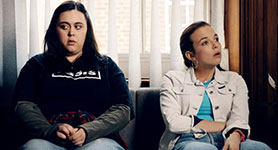 My Mad Fat Diary: Based on the book My Mad Fat Teenage Diary (non-fiction) by Rae Earl, My Mad Fat Diary is an E4 TV series that tells the bittersweet story of a troubled young girl who is trying to get her life back together after spending four months in a psychiatric hospital following her attempted suicide. Earl was also heavily involved in the writing of the series alongside Tom Bidwell (other writers included George Kay and Laura Neal). Earl was born in England but lives in Hobart, Australia, and continues to have success as an author (now of fiction). Bidwell started out on soaps and his next writing project is a new TV remake of Richard Adams’ classic novel Watership Down. 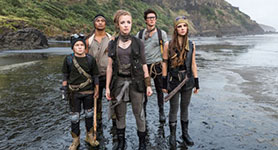 The Cul De Sac: Produced by Greenstone TV Productions, The Cul De Sac centres on a group of teens who wake to a world where the adults have disappeared and all technology has ceased to function. While most focus on their survival, others see it as an opportunity to create a new order. The New Zealand show was created by Stephen J Campbell, whose 20 years in the industry have seen him create teen dramas like Secret Agent Men and The Amazing Extraordinary Friends. Campbell has spoken of why he likes this area of programming: “Making content for young people is fantastic fun. They’re very open to new ideas and concepts – they’re always looking for the next cool thing, but they are also brutally honest. If you miss the mark, they will not hesitate to tell you. However, if you do manage to engage them, they’ll stay with you for the entire journey – or until the next cool thing comes along.” 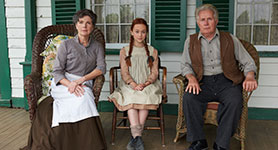 Anne of Green Gables: Based on the classic novel by LM Montgomery, Anne of Green Gables is a two-hour Canadian production from Breakthrough Entertainment. Over the summer a deal was done that will see the production appear on PBS in the US. The new version, which stars Martin Sheen, has been directed by John Kent Harrison and based on the original script by Susan Coyne. The author’s granddaughter, Kate Macdonald Butler, served as executive producer. Coyne is a respected Canadian writer and actress, who is known as one of the co-creators and co-stars of Slings and Arrows, a TV series about a Canadian Shakespearean theatre company. She has been nominated for four Writers Guild of Canada awards, winning three. She is also a veteran of the Toronto theatre scene. Michael Kelley, senior VP of programming and business affairs at PBS, said: “The story and Anne character have become a staple of childhood innocence and inspiration. Breakthrough’s revival of this globally recognised literary story has delighted so many viewers in Canada and around the world and we are glad to secure this film for broadcast on PBS.” 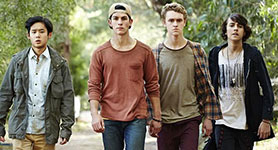 The Nowhere Boys: This acclaimed series (winner of an International Emmy) follows four boys who get lost in a forest and discover, when they return home, that they are in an alternate world identical to theirs except for one startling difference – they don’t exist. The show launched on ABC3 in 2013 and so far is up to season three. The original idea came from Tony Ayres, though he hasn’t written any episodes. He is, however, credited as co-writer on a feature film spin-off entitled Nowhere Boys: The Book of Shadows. All told, 11 writers have contributed to the series, though the three most prolific are Roger Monk, Craig Irvin and David Hannam. Monks’ previous credits include Dance Academy and East of Everything, while Hannam has worked on Dance Academy and cult soap Neighbours. Irvin is a new recruit to the TV business, having only written shorts like Gusto and Tethered before Nowhere Boys. Giula Sandler, credited with four episodes, has written episodes of Glitch and McLeod’s Daughters. 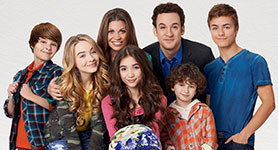 Girl Meets World: You could pick out any US teen/tween drama from The Thundermans to The Vampire Diaries and find something positive to say about it. Disney’s Girl Meets World, which airs on ABC, is interesting because it’s a sequel to Boys Meets World, which aired from 1993 to 2000. The original series centred on Cory Matthews, including his relationship with Topanga Lawrence and their eventual marriage. Ben Savage and Danielle Fishel, who portrayed Cory and Topanga, reprise their roles in Girl Meets World, which centres on the life of the couple’s daughter, Riley Matthews. Both series were created by Michael Jacobs and April Kelly. Jacobs has written several TV series including Dinosaurs, Charles In Charge, My Two Dads and The Torkelsons. Kelly’s output is also prolific and includes iconic series such as Happy Days and Mork & Mindy. Among other credits, she wrote TV series The Pursuit of Happiness and is the author of Murder in One Take (with Marsha Lyons). 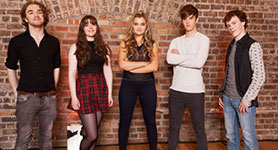 Eipic: This is an irreverent Irish-language drama series that is very contemporary but has echoes of past events. It centres on five rural teenagers who take over their abandoned local post office to start a musical revolution in 2016. The story is about escape, empowerment and what it means to be a teenage “hero” in contemporary rural Ireland set against the backdrop of the 1916 centenary celebrations. The series was penned by Mike O’Leary, whose credits include Ghosthunters On Icy Trails, Misfits, Doubt On Loan and Not Safe For Work.