The best of Britcom

The BBC is planning a celebration of the British sitcom next year. So to get in the spirit, we’ve decided to look at 10 of the best British sitcoms of all time – with a nod to the writers. 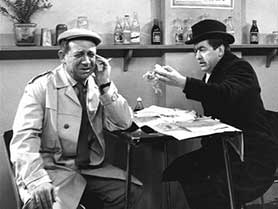 Hancock’s Half Hour (1956, BBC)
The BBC’s sitcom celebration will mark the 60th anniversary of Hancock’s Half Hour’s transition from a radio programme to a TV sitcom. A groundbreaking show, it featured the comic genius of Tony Hancock and Sid James, supported by the likes of Hattie Jacques and Kenneth Williams. The writers of the show, which ran for seven seasons on TV, were Ray Galton and Alan Simpson, with Johnny Speight credited on one early episode.

Galton and Simpson, both still alive, rank as one of the most important of the many writing partnerships to have emerged on the British comedy scene. Aside from their work with Tony Hancock, they created Steptoe and Son, another iconic British sitcom. Other highlights in their joint writing career include a series of projects with Frankie Howerd and The Galton & Simpson Playhouse (1977). 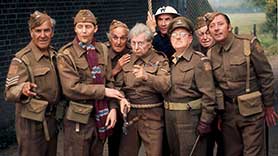 Dad’s Army (1968, BBC)
The tale of Warminster Home Guard is arguably the greatest ensemble comedy to have come out of the UK, featuring the likes of Arthur Lowe, John Le Mesurier, Clive Dunn and Ian Lavender. This probably explains why it has just been remade as a feature film.

The writing talents behind the show were creator Jimmy Perry and co-writer David Croft. Perry went on to enjoy success with It Ain’t Half Hot Mum, Hi-de-Hi! and You Rang M’Lord, though none of these quite hit the creative heights of Dad’s Army. Croft also worked on It Ain’t Half Hot Mum and Hi-de-Hi! and managed to fit in two other huge hits in the shape of Are You Being Served? and ‘Allo ‘Allo (co-written with Jeremy Lloyd). What is notable about Perry and Croft’s work is just how prolific they were – writing far more episodes than many of their peers. Dad’s Army, for example, ran for 80 episodes. Sadly, Croft died in 2011. 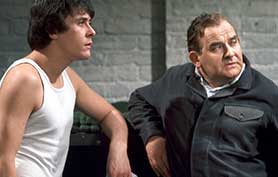 Porridge (1974, BBC)
This prison sitcom was a wonderful showcase for comic genius Ronnie Barker as Fletcher, ably supported by Richard Beckinsale, Brian Wilde and Fulton Mackay. Although regular repeats on the BBC made it feel like the show had hundreds of episodes, there were in fact only 20 – written by Dick Clement and Ian La Frenais. After Porridge, Clement and La Frenais continued to have a massive impact on the British TV business with projects such as Lovejoy, Shine On Harvey Moon, Tracey Takes On… and Auf Wiedersehen, Pet.

Still active, the pair changed direction during the last decade, focusing more on movies and miniseries (Flushed Away, Killing Bono, Spies of Warsaw and the upcoming Kinks movie You Really Got Me). They are also lined up to write an updated episode of Porridge for the BBC’s 2016 sitcom celebration. 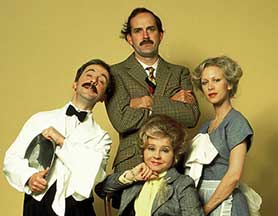 Fawlty Towers (1975, BBC)
The story of incompetent and arrogant hotel owner Basil Fawlty (played by Monty Python star John Cleese) is a blueprint for how to write a great sitcom. The combination of great gags, flawless plotting and hilarious physical comedy set the bar for everyone who followed. There were only 12 episodes, all written by Cleese and his then wife Connie Booth, who also starred in the show. After Fawlty Towers, Cleese wrote the hit movie A Fish Called Wanda but Booth concentrated on acting. She left the industry in 1995 to pursue a new career as a psychotherapist. 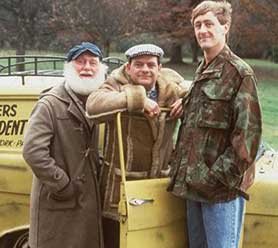 Only Fools and Horses (1981, BBC)
From a comic purist’s point of view, this show possibly went on a bit long (65 episodes), but at its best it was comedy gold. Starring David Jason and Nicholas Lyndhurst, it centred on the day-to-day life of a hapless wide boy from South London (Del Boy) and his sleazy circle of friends. The show was the brainchild of John Sullivan, who sadly died at the age of just 64. Sullivan had a successful career that ran through until the last decade, but his second most iconic show was probably his first series, Citizen Smith. Born and raised in Balham, Sullivan’s best works drew heavily on his own experience of growing up in a poor working-class environment. 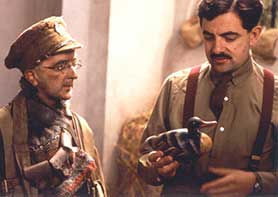 Blackadder (1982, BBC)
Season one of Blackadder in 1982 (written by Richard Curtis and Rowan Atkinson) was OK without being spectacular. But the show really took off in season two (1986) when Atkinson focused on the acting and Curtis was joined in the writing room by Ben Elton. The same setup was kept in place for seasons three (1987) and four (1989) as the central Blackadder character moved forward in time. While physical comedy played an important role in the success of the show, Blackadder’s erudition and wordplay made it stand out as special.

Curtis has, of course, gone on to be a screenwriting rock star, with movies like Notting Hill and Bridget Jones’s Diary under his belt. Most recently he wrote the screenplay for BBC1’s Roald Dahl adaptation Esio Trot. Elton, who had already proved his credentials with The Young Ones, went on to write an amusing sitcom called The Thin Blue Line. But his most recent sitcom, The Wright Way, was generally acknowledged to be a flop. 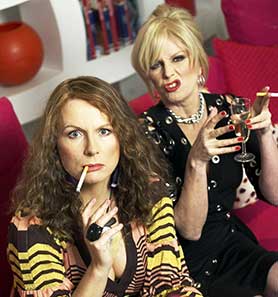 Absolutely Fabulous (1992, BBC)
The British sitcom business has been dominated by strong male characters, so it was refreshing to see a show like Ab Fab deliver such hilarious female performances, especially in the early seasons. Written by Jennifer Saunders and Dawn French, with some episodes by Sue Perkins in 2003, the show focuses on the flaky but fabulous world of PR executive Edina (played by Saunders) and her outrageous friend Patsy (Joanna Lumley).

French and Saunders continue to work together, primarily on their comedy show French & Saunders. Saunders also wrote a sitcom called Jam & Jerusalem, which takes a humorous look at a Women’s Guild (2006 to 2009). French, meanwhile, starred in a sitcom that nearly made it onto this list, The Vicar of Dibley – written by Richard Curtis, Paul Mayhew-Archer, with one episode credited to Kit Hesketh-Harvey. She also wrote Roger & Val Have Just Got In with Beth Kilcoyne and Emma Kilcoyne (2010 to 2012, 12 episodes). 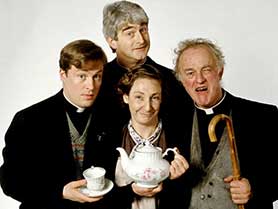 Father Ted (1995, Channel 4)
One of the finest comic performances of the last 20 years came from Dermot Morgan as the eponymous Father Ted, with excellent supporting work by Ardal O’Hanlon, Frank Kelly and Pauline McLynn. The story of three hapless priests living on a remote island with their housemaid Mrs Doyle, Father Ted (25 episodes) was written by Graham Linehan and Arthur Mathews.

Linehan, born in Dublin, continues to be in the front rank of British comedy having worked on series such as Black Books, Big Train, The IT Crowd and Count Arthur Strong. Most recently he worked on The Walshes, a three-parter about a West Dublin family, based on a web series.

Mathews, also Irish, shares a number of credits with Linehan but also co-wrote the controversial Brass Eye episode Paedophilia and episodes of The Catherine Tate Show. His most recent credit is Toast of London, about an eccentric middle-aged actor who spends more time dealing with his problems off stage than performing on it. Written with its star Matt Berry, a third season begins broadcasting this week on Channel 4. 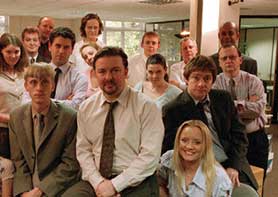 The Office (2001, BBC)
The Office introduced the world to loathsome boss David Brent (played by Ricky Gervais) and then spawned a highly successful US spin-off. Hilarious and embarrassing at the same time, the show breathed life back into the mockumentary format, opening the door to later hits such as Modern Family. There were only 14 episode of The Office, written by Ricky Gervais and Stephen Merchant, while the US adaptation eventually totted up 201.

Gervais has since gone on to write sitcoms such as Extras, Life’s Too Short and Derek, and is now working on a new David Brent production called Life on the Road. Merchant worked with Gervais on Extras and Life’s Too Short and then co-created and starred in the 2013 series Hello Ladies, about a gawky Englishman who goes to LA to find the woman of his dreams. Commissioned by premium channel HBO in the US, Hello Ladies used a writers room model. Also credited as co-creators were Lee Eisenberg and Gene Stupnitsky while writers included Lindsey Shockley, Jen Statsky, Daniel Chun and Ron Weiner. Also note Warwick Davis’s role as co-creator, writer and star of Life’s Too Short. 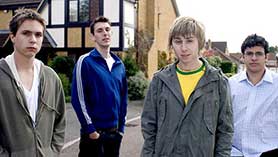 The Inbetweeners (2008, E4)
You could probably spend a good few hours arguing about whether The Inbetweeners is better than Peep Show, Spaced or The Thick of It, but there’s no question that it was a zeitgeist show that secured a huge fanbase, which it then carried over into the movies. Undoubtedly, The Inbetweeners captured the essence of miserable adolescence better than anything since The Smiths.

Funny, pathetic and relentlessly funny, it proved that the British sitcom is still a form to be reckoned with. It was written by Damon Beesley and Iain Morris, who also wrote the franchise’s two movies. Beesley and Morris have since shifted more into production with shows like Drifters – which is about three friends sharing a flat after graduating from university.

With apologies to the writers of the following shows – many of which could (and perhaps should) have made this list: Yes Minister, The Young Ones, Rising Damp, The Liver Birds, Birds of a Feather, Keeping Up Appearances, The Good Life, One Foot in the Grave, Spaced, The Thick of It, Are You Being Served?, Some Mothers Do ‘Ave ‘Em, Steptoe & Son, Last of the Summer Wine, Red Dwarf, I’m Alan Partridge, Drop the Dead Donkey, Miranda, Outnumbered, The Likely Lads, Peep Show, The Fall & Rise Reginald Perrin, The Royle Family and The Vicar of Dibley.