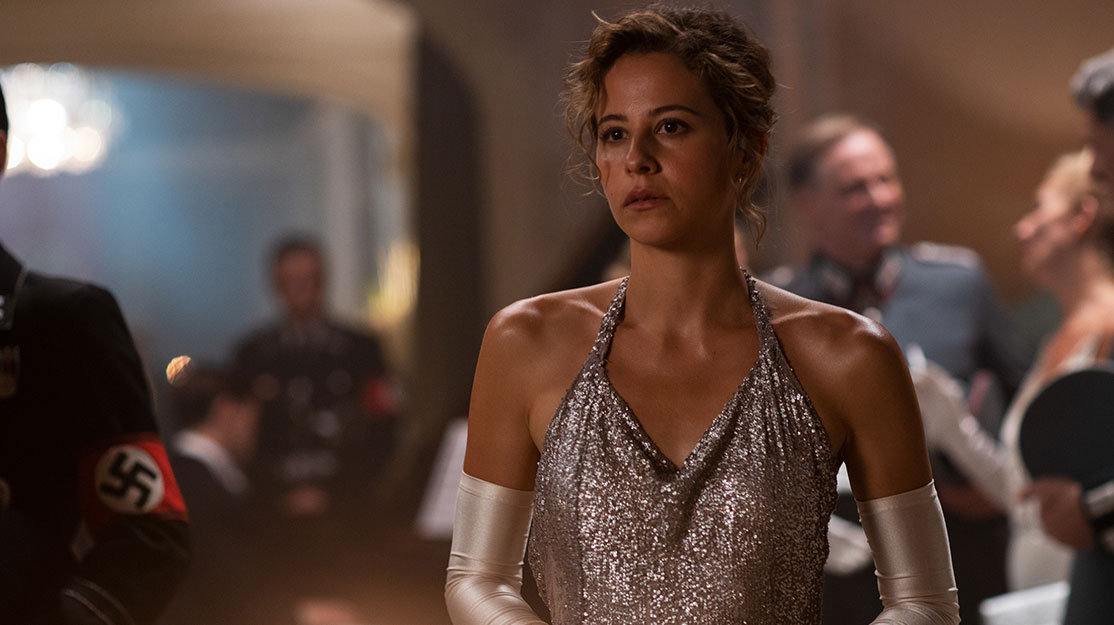 Based on Julia Navarro’s novel, Spanish drama Dime Quién Soy (Tell Me Who I Am) charts one woman’s extraordinary journey though some of the 20th century’s most notable moments. Creator José Manuel Lorenzo and director Eduard Cortés tell DQ about making the series.

With a story set in nine countries, featuring 300 shooting locations and more than 3,000 extras, and based on a book that runs to more than 1,200 pages, Dime Quién Soy (Tell Me Who I Am) is undoubtedly one of the most ambitious television dramas ever produced in Spain.

This nine-part limited series, adapted from Julia Navarro’s novel, is epic in both scale and scope, as the story follows one woman’s journey across Europe, set against the backdrop of many of the major events of the 20th century.

When a publisher receives a mysterious manuscript, he will learn about the turbulent life of Amelia Garayoa (played by Irene Escolar), a woman driven by her ideals who leaves her whole life behind to fight for freedom. Through the four men who will mark her life – husband Santiago plus Pierre, Albert and Max – Amelia’s personal, romantic and political adventures as a spy take her from the Spanish Civil War and the Second World War to the fall of the Berlin Wall as her story unfolds in Spain, Italy, Germany, Greece, Argentina, Russia, Poland, France and the UK.

“I have done a lot of productions but my dream was to do a real European production with all the languages and in many locations,” says series creator and showrunner José Manuel Lorenzo (El hombre de tu vida). “This is the biggest and most difficult production I have ever faced in my life. This was another level.”

Lorenzo first read Navarro’s novel six years ago and immediately sought out the author’s phone number via a friend. He then spent three hours trying to convince her to let him adapt Dime Quién Soy, in what would prove to be the beginning of a very close collaboration throughout the production process.

But it took time to get the series up and running, with numerous broadcasters and platforms shying away from the large investment the project needed. Spanish streamer Movistar+ eventually stepped in to back the series, though by this point Lorenzo had already attempted and discarded three different versions of the script. Then, when director Eduard Cortés came aboard, the showrunner found someone who shared his vision of telling the story through the eyes of Amelia and filming the series with a natural approach to language, rather than shooting it entirely in Spanish or with a Spanish/English mix.

“One of the most difficult decisions I took was wanting to have all the different languages in my show, so 60% is Spanish and 40% is in English, German, Italian, Greek, Polish and others,” he says. “That was very difficult in casting and it was a nightmare to put all of [the languages] in Madrid, Budapest or the other locations we used. During production, I was always angry because of that decision. But when you see the show – wow! You think this is real.

“The other important point for me is I wanted to tell two histories: the history of this woman and the history of Europe. There were many difficult decisions we took in the production but, in the end, I think we [achieved our] dream.”

Lorenzo, Cortés and screenwriter Piti Español spent two months together talking about the project and working out a structure to the series, which has a short opening in 1998 when publisher Javier first receives the manuscript, before dialling back several decades to 1934 where we first meet Amelia in the midst of revolutionary Madrid.

“We were talking in my office, reading, writing and rewriting,” Lorenzo recalls. “We also needed to decide what we were going to shoot because the book is too big and we wanted to have real voices for all the characters and real dialogue. We worked a lot on that. With Eduard, I also wanted very clear settings. The camera has to be the eyes of Amelia.

“I took a lot of care with the art. We spent a lot of money creating the different locations, the make-up and costumes. It was tremendous. When I was working with Eduard, there was magic: any time we went on set, he would say the set talked to him. He would see how he would shoot it. He was quick to decide how to shoot the scenes. It’s very modern but it looks very classical.”

Echoing Lorenzo, Cortés says Dime Quién Soy is “the most important adventure” in his career, which has included films Otros días vendrán and La vida de nadie. He was initially drawn to the project by the opportunity to revisit history and the nine countries in which the story takes place.

“But above all, I was intrigued by the idea of adapting the story of Amelia Garayoa, the protagonist,” Cortés says. “Her refusal to conform and her need to engage with the time she lived in make her an absolutely fascinating contemporary figure. Her quest, her defeats, her triumphs, her ability to surprise and, above all, her personal growth were always, at least from my point of view, the most attractive elements of the story. Plus, having the chance to work on all these aspects with an actress of the calibre of Irene Escolar was an absolute joy.”

Lorenzo describes Amelia as “one of the most patient and beautiful characters I have ever read in any book.” A modern woman for her time, she chooses to leave her family behind to follow her dreams and impulses – decisions that lead her to become a spy. “But she didn’t know being a spy is forever,” he says. “It’s not something you can come in and out of. When you start, it’s for the rest of your life. She is obliged to do things completely against her feelings and her mind, but she’s a very brave and special woman in a special time.”

In casting Amelia, Lorenzo sought an equally special talent who could relay the complexities of the character while also being an almost continuous presence on screen, as the character appears in 85% of the series. The showrunner subsequently went to a theatre in Madrid to watch the last night of a play in which Escolar was performing, after which the pair discussed Dime Quién Soy over dinner.

“She was such a tremendous actress on stage and able to do everything – cry, laugh, be serious, be credible,” he says. “After the play, we went for dinner together and, at the end, I wrote the contract for her on a napkin and we signed it. After that day, I couldn’t imagine another actress than her.”

The role consumed Escolar, so much so that she spent three days learning to dance the cancan for what turned out to be a minor scene. “She wanted to be Amelia,” Lorenzo says. “One of my main concerns was if any actor could support such a tremendous filming schedule. She rested only one week in seven months. Irene did it with such spirit. She wasn’t Irene for many months.”

Amelia is just one of 150 characters in the series – including Pierre (Oriol Pla), Albert (Will Keen), Max (Pierre Kiwitt) and Carla (Maria Pia Calzone) – backed up by the aforementioned masses of extras. The show was filmed in numerous locations across Spain and in Budapest, which doubled for many of the European locations portrayed on screen. Throughout, the creators’ ambition was to create a modern period drama, using contemporary filming techniques to depict the past. Music is also integral to the series, with composer Lucas Vidal blending classical melodies with electronic rhythms.

On set, Cortés worked with the actors to explore every little detail of their characters, helping them understand the person they were playing and their relationships to others. The breadth of the story also meant he sought to create different atmospheres depending on where scenes were set and the historical period in which they played out.

“This was greatly enhanced by the photography, the art direction, wardrobe, planning and editing,” he says. “Every country has its own undertones, its own language, and the perception that the viewer ends up with is one of a continuous journey in both space and time.

“It was a difficult shoot yet, at the same time, very stimulating. Almost every day, when we finished shooting, I had the feeling that we had filmed something really worthwhile. Plus, the fact we filmed half the series in Budapest gave me the opportunity to work in some truly incredible spaces, very different from the places I’ve been used to working in. This further enriched everything we filmed, which was really inspiring for everyone.”

Understandably, making a series set across five decades and in nine countries, with actors of nine nationalities speaking eight different languages, proved to be incredibly demanding for the director, who orchestrated scenes featuring huge numbers of extras on sets that only partially existed. They would be fully realised through visual effects in post-production.

“Obviously all of this was very complex and needed tremendous precision and meticulous planning when it came to the shoot,” Cortés says. “In addition, as with most projects, the shoot was completely out of chronological order. This meant the actors, and indeed the whole team, needed to make a tremendous effort to maintain the continuity of their characters and the story in general.

“I was so lucky to be able to work with Irene Escolar as the protagonist and, along with José Manuel Lorenzo, she was my other big support during filming. Thanks to her enormous talent and incisive intelligence, something that could have been extremely challenging turned out to be relatively straightforward. We really flowed together and we never lost the feeling of being in control of what we were doing.”

Produced by Movistar+ and Telemundo International Studios in collaboration with DLO Producciones, the series finished filming in January this year, with editing then taking place remotely during the pandemic to ensure it would be ready in time for its debut on Movistar+ on December 4. HBO will air the series across Latin America from December 6, while distributor Beta Film has also sold it to Norway’s NRK, Denmark’s DR, YLE in Finland, RTP in Portugal and Forthnet Group in Greece and Cyprus.

“I would like viewers to experience every moment of Amelia Garayoa’s life with the depth of emotion we wanted to convey,” Cortes says. “I believe viewers will find the series addictive, surprising and beautiful, with a strong emotional punch and some very spectacular moments. I really hope most viewers will experience it with all the emotional intensity the protagonist and her story deserve.”

Building on the international success of Spanish series such as Grand Hotel and La Casa de Papel (Money Heist), Dime Quién Soy sets a new benchmark for Spanish productions in terms of their scale and ambition, according to Lorenzo.

“This is quite new. It’s the first time we have done a show in Spain on this scale, with many countries and many languages,” he says. “I am very proud and grateful to the people I worked with because they were under tremendous pressure, but everybody worked with a laugh every day. Everyone was happy to be in the show. We had an extremely powerful team that helped us. People believed in the dream. Everybody believed we were doing something great.”