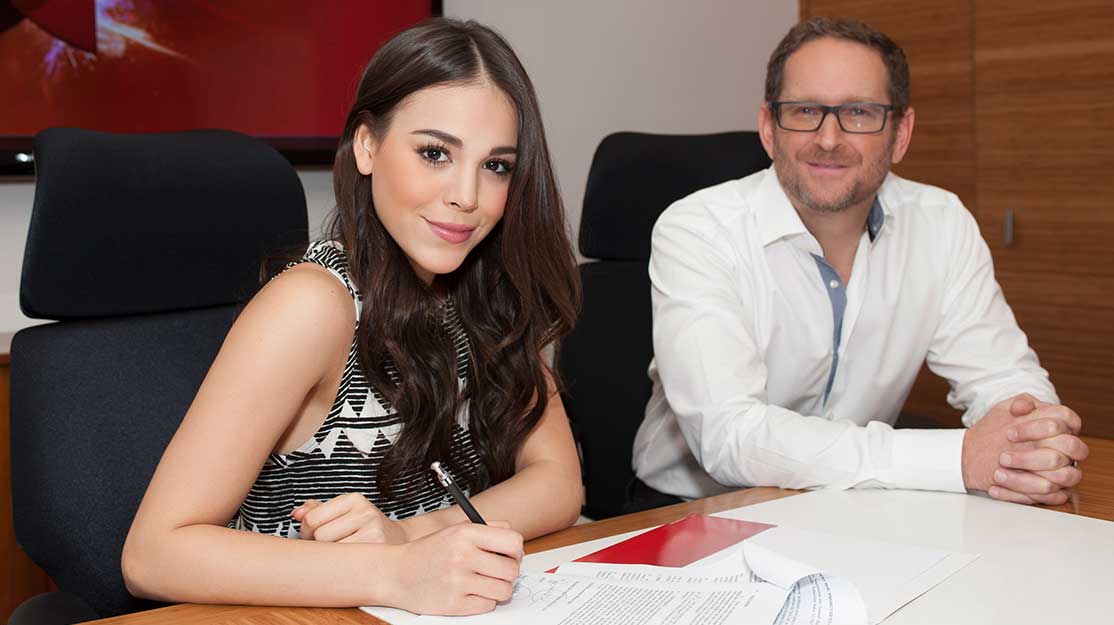 Mexican star Danna Paola’s decision to return to the small screen after a five-year absence is another coup for the flourishing international television business, says Michael Pickard.

She was the young star who turned her back on television to focus on a career in music and theatre.

But after a five-year absence from the small screen, Mexican actor Danna Paola is set to return in a new telenovela produced by US Spanish-language broadcaster Telemundo.

Telemundo Studios confirmed this week that Paola(pictured above with Telemundo’s Joshua Mintz) will star in the forthcoming Quién es Quién (aka Who’s Who). She will play Paloma, a strong and feisty young mother who, together with her son, has found success in life in the face of adversity.

“I am honoured to be part of the Telemundo family, and to have the chance to play the lead in a project of this magnitude,” Paola said. “I know viewers will love Quién es Quién. They’ll get to see me play a unique character with lots of nuances – someone very different from the roles I’ve played before.”

The actor made her name by starring in around a dozen telenovelas as a young girl, including Maria Belen, which gave Paola her first leading role at the age of six. She played a girl whose adoptive parents are killed in a car crash and she becomes the heir to her family’s property, much to the anger of her evil uncle.

Roles in Amy, la Niña de la Motel Azul (Amy, the Girl with the Blue Schoolbag) and Atrévete a Soñar (Dare to Dream) cemented her early stardom, while she was also tapped as one of the voice stars of the Disney movie Tangled in Hispanic America.

By 2011, Paola began to focus on her music career after releasing several solo albums and also recording the soundtracks to many of the children’s telenovelas in which she starred.

Then in 2013 she won the coveted role of Elphaba in the first Spanish-language version of smash-hit musical Wicked. She is currently on stage appearing in Hoy No Me Puedo Levantar, which is touring around Mexico.

Speaking to Huffpost Voces, Paola said she was “happy and excited” to be returning to the small screen.

“I’m sure you will love it,” she said. “I think Quién es Quién came at the right time in my life.

“(Telemundo) is a network with prestige and credibility, and I liked the project,” Paola said of her decision to join the novela. “When I spoke to Telemundo about the soap and my character, and after discussing it with my family and my management team, we decided it was the right project and I’m very happy. It’s a way of transcending borders and to reach new audiences both in acting and music.”

The actor said Paloma is “a character with many shades,” adding: “(Viewers) are going to see something different from what I’ve done before. She’s a character that will allow me to explore various facets, and I will be surrounded by a great team.”

The signing is a fantastic coup for Telemundo, which is suitably excited about the new addition to their cast list. Paola brings with her a legion of loyal fans – she has 2.53 million followers on Twitter and another 1.1 million followers on Instagram – who will no doubt tune in to the series, while keeping up to date with the show across social media.

Filming for Quién es Quién, which is an adaptation of Chilean telenovela Amores de Mercado, will take place in LA and Miami.

“We are thrilled to welcome Danna Paola to the network,” said Joshua Mintz, executive VP of scripted programming and general manager at Telemundo Studios.

“Her participation is another example of our continued commitment to offer the audience the best productions featuring top-calibre artists.”

Her childhood stardom notwithstanding, Paola’s return to television represents another feather in the cap of international drama as it continues to attract star names from the world of film, theatre and music. And with Paola headlining the series, Telemundo can expect to find international broadcast partners for Quién es Quién around the world.