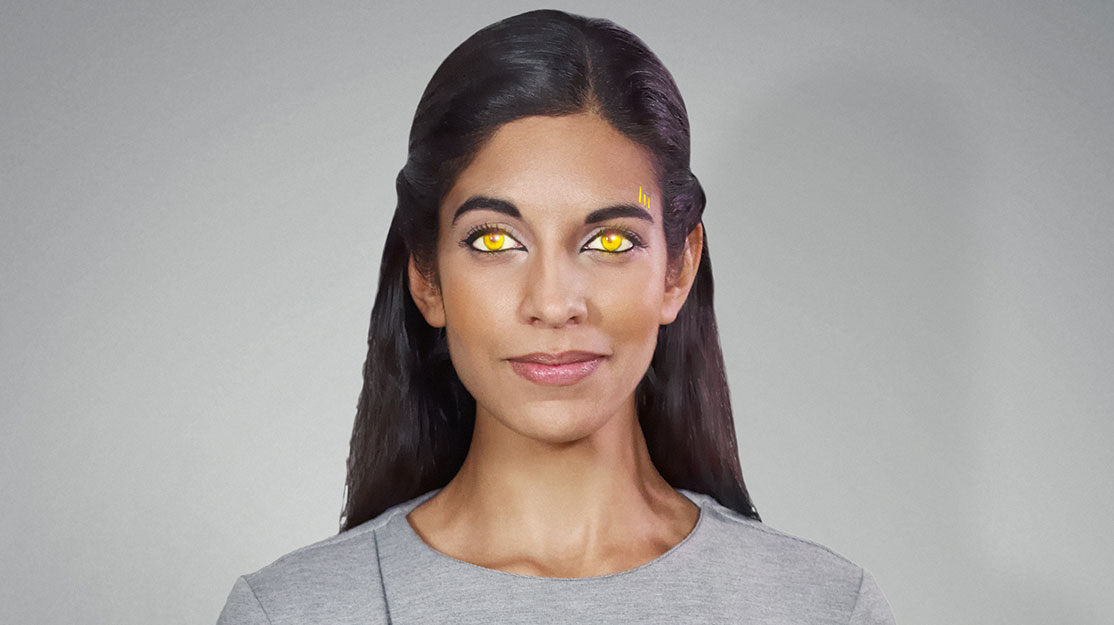 While Syfy is used to travelling across space and exploring new planets, its latest series really is out of this world.

Described as the first ever hybrid VR scripted series, Halcyon will blend traditional storytelling with virtual reality, with viewers getting the chance to step into this ground-breaking new show.

Set in 2040, the storyline centres on Blake Creighton (Michael Therriault), who is CEO of Halcyon, the world’s leading VR company. Having cornered the VR market, Halcyon has discarded headsets and now allows users to access virtual space via neurological implants that manipulate the senses to create a virtual world.

However, when Creighton is found dead, presumed murdered, Detective Jules Dover (Lisa Marcos) and her partner Asha (Harveen Sandhu, pictured top) must investigate whether this is the world’s first virtual crime.

The series will launch on Syfy’s channels and websites outside the US on September 22. Those who are only watching linear episodes will be able to see short recaps of the VR episodes to ensure they can follow the complete storyline.

How did you cast the show?
Benjamin Arfmann: It was not really that different from casting a regular television show. But it was interesting in that you would have to explain to them that this isn’t just a TV show, it’s also going to be part VR – and, for the vast majority of the actors we auditioned, that was a completely foreign concept. Maybe they had done some VR work for games before but they had never done an explicitly VR production because not very many people have done that. There was an intellectual leap just in explaining the idea, but you cast it the same way you cast anything else. You look for really good actors.

When they pitched the idea, did it seem strange? Was this something you’d heard of before?
Harveen Sandhu: It didn’t seem strange at all. I didn’t understand what VR was until I got to see the episodes for the first time. The whole time on set I was so curious to know how they would marry the VR with the traditional linear episodes. There were definitely some brilliant challenges on set substituting the VR part of it, because it was done in post-production. But seeing the episodes was a revelation and now I really understand how [VR and linear work together]. Coming in I really had no idea. It wasn’t a detriment at all in terms of performing. Acting is acting and it’s all so connected to the narrative and the story that it never took me out of it or confused me.

What does the user watching Halcyon experience in VR?
BA: There are live-action episodes that are like traditional TV shown in 2D. We shot with real cameras in real locations. Over the course of the narrative, our characters go into VR. It’s a crime procedural set in the near future and our characters are investigating a crime that took place in virtual reality, so to investigate the crime scene, the scene itself is virtual. Whenever the characters go into the crime scene, the audience gets pulled into a 3D space. They can walk around in it, interact with the objects, look for clues and then the audience starts to have agency in terms of pushing the investigation forward while our characters, through voiceover, discuss the plot and discuss the clues that are being found. It’s much more like a hybrid between a traditional TV series and a game in some ways, but a VR game.

How were the VR scenes filmed?
BA: We did motion capture and volumetric facial captures for our performers to get them in the space – though it’s a hybrid, going at it from a bunch of different directions. There’s traditional animation, we did some mo-cap performances, and Harveen recorded all of her work on a sound stage for the VR episodes. In terms of capture, it’s all over the place.

Stefan Grambart: The reason for that is obviously because we were working around the limitations of the technology where it stands today. We learned a lot from building this. We spent a good month-and-a-half on optimisation to get it working on both Oculus Rift and Gear VR because VR is so new. Optimisation for games has always happened but it’s very different now in VR. We’re hopefully going to be porting to more platforms.

Does the viewer get to move around in VR and take part, or are you in a singular camera position?
BA: You can move around in the space and it is interactive. That was the thing that the three of us through the course of making it wrestled with the most. We’ve got this traditional TV component that’s third-person impassive for the audience; you’re watching the story happen and you have no control over it. We made a choice in that, at different points throughout the story, the viewer goes into VR and they move around, they interact with objects and they hear the characters talking. Then we had to answer a lot of questions. Now the audience is no longer passive and third person, are they playing a character? Do they get to interact directly with the characters? Are they just like a ghost that’s interacting with the objects but not being acknowledged, and how does that work? A lot of that process was in addition to solving technical problems – it was solving narrative problems. How do you tell a story when your audience becomes a part of that story?

Harveen, what was the biggest challenge for you as an actress on the series?
HS: The biggest challenge for me was substituting the VR components while filming in real life. I remember this brilliant moment Ben and I were trying to figure out and it was really hard. Asha’s made of virtual intelligence – she’s not actually flesh and blood – and in one of the episodes, someone walks through her because they can’t see her. I had to create that illusion in some way as an actor. Asha can see them and feel them walking through her and it pisses her off. I had to try and recreate that and it was really tricky because it’s all in your imagination.

Will Halcyon lead to a new trend of VR projects?
SG: I want to experiment and try things that haven’t been done before. A lot of people are looking for answers, and there seem to be two types of answers: one that’s like it’s the Wild West – try everything, which I don’t feel is helpful for people that are trying to get into VR – but then there’s also the people who say you can’t do this or you can’t do that, and I think that’s too limiting. Ben and I are still discovering and we’re all trying to find our way. We’ve made some excellent headway into what VR storytelling is, but everyone still has a long way to go and I’m super excited about this medium.

What is the future of VR?
BA: This is the future. What we’re doing now with headsets strapped to our faces and avatars where we can hear each other but we can’t read non-verbal cues, this isn’t necessarily the future, but it points towards it. I have a full belief in the idea that interactive narratives are going to be the hot shit within the decade. Is this going to be the big Avatar moment that opens the gates, is this The Jazz Singer? No, probably not – but it’s a really important first exploratory step that’s exciting. It’s uncharted territory. The thing that I’m most excited about right now is not necessarily that audiences are going to start flooding into VR, it’s that young storytellers and creators are going to get inspired to take that first step on their own and make something totally new that we couldn’t have predicted. That’s what’s coming next.

HS: From an acting point of view, this is the next thing in terms of bridging the gap between performers and audiences and bringing the audience closer to the action, closer to the narrative, closer to the story, closer to the actors. It’s a really interesting medium for actors to work with. It stretches our definition of ‘performance’ and what that means, what you can do with that and how much further you can go into it. For young actors, it’s exciting and is something so worth exploring. Having watched some of it, it’s really cool.