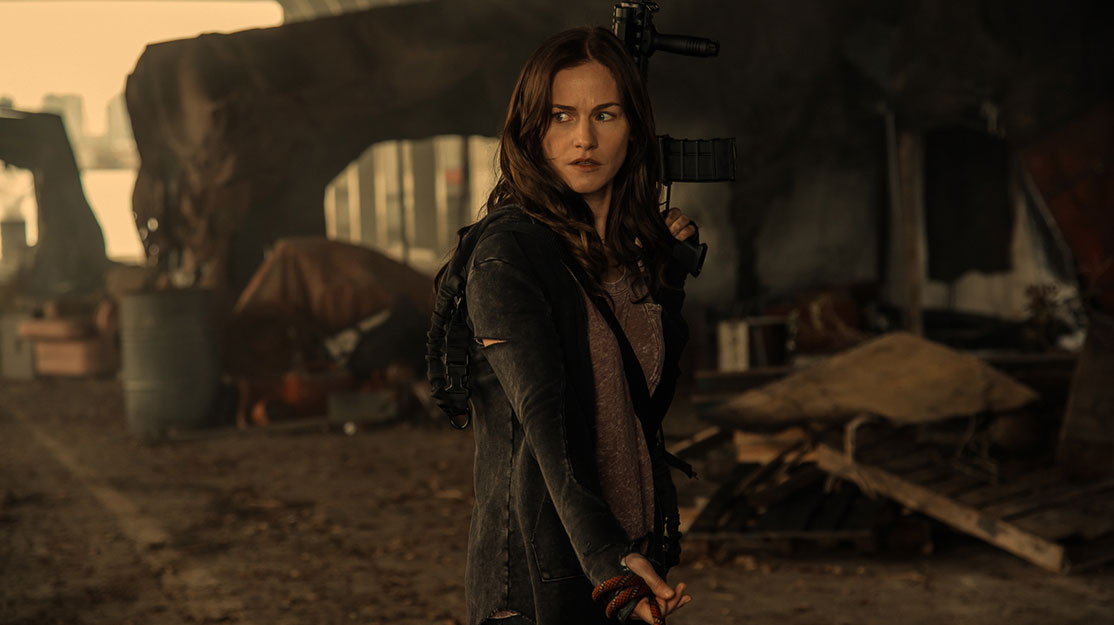 DQ discusses Syfy’s Van Helsing with its cast and crew

Vampires have a new foe in the shape of Kelly Overton, the star of Syfy drama Van Helsing. DQ chats to the actor as well as showrunner Neil LaBute about fighting the undead.

In Bram Stoker’s classic 1897 horror novel Dracula, the vampire Count Dracula’s attempts to spread the curse of the undead are thwarted by a group of people led by Abraham Van Helsing.

Fast forward 119 years to the present day and the heir to the Helsing empire, Vanessa Helsing, is leading a new charge against some particularly blood-thirsty enemies.

Van Helsing, which launches on US cable channel Syfy on September 23, focuses on Vanessa who, five years after falling into a coma, awakens to find the world has been overrun by vampires – and, with a unique blood type that gives her the ability to turn vampires human, she quickly becomes humanity’s last hope of survival.

The genre is familiar territory for actress Kelly Overton, who stars as Vanessa, having previously appeared in HBO vampire series True Blood.

“I was very fascinated by vampires as a child. But I didn’t intentionally seek out a vampire series,” she says. “It’s just a coincidence – the business works like that. I loved the story and the character, and it happened to be set in a post-apocalyptic vampire world.”

In particular, it was the fight sequences and the chance to use her athletic ability that appealed to Overton, who also highlights her character’s journey of self-discovery: “She wakes up from a coma five years in the future and has to learn who she is all over again. And I love that the audience goes on that journey with her. It’s interesting and awesome. She’s also a mum and has got a daughter, like me. That spoke to me. I just thought it was really compelling.

“Working out and being athletic has always been a part of my life. At high school I was undefeated in high hurdles! Early on in the business when I would get strong female roles and play some tough chicks, they could see I was athletic and it just carried on. A few years ago I did Tekken [the 2009 movie based on the video game franchise] and did all my own stunts. That’s probably the first thing I can think of in my career that was very fighting-based. I was in heaven! It was one of the best experiences I have had in my career and since it’s such a big part of my job, it’s something I always have ready. For this role, I focused on boxing and weight training – bodybuilding and muscle mass. I bulked up.”

While Overton admits she took a lot of inspiration from Sigourney Weaver’s Ellen Ripley, the central character of the Alien films, Vanessa really started to take shape via collaboration with showrunner Neil LaBute when filming began in Vancouver.

“There were some blueprints in the beginning but it was definitely a character that we formed together and are continuing to form,” the actor explains. “The great thing about Neil, the writers and producers is that it was such a collaborative community. I really feel like we have been creating this character together, even to the point of helping to shape the season and rewriting some stuff.

“I can do my job best when there’s a deep understanding of the character and who she is and what she wants. I love making them as grounded and layered as possible and finding a way to keep consistencies of character traits. How she grows and how she changes is based on the friction we created. I love what we do. The more fun I can have, the better.”

Distributed by Dynamic Television, the series is produced by Nomadic Pictures, which first approached LaBute about showrunning the project after working with him as a director on AMC western Hell on Wheels.

The writer and playwright also has previous experience with vampires, having once adapted Dracula for the stage, and was keen to hear Nomadic’s thoughts about taking Stoker’s legend in a new direction.

Intrigued at the opportunity to create a new brand of female hero, he signed on and started work to bring Vanessa Helsing and the world around her to life.

“Our mandate is not to have just a great lead but to surround her with great people with big stories,” LaBute reveals. “I think we did a good job of it. I feel good about the characters and the show has spent a decent amount of time developing characters rather than creating fodder to kill off.

“We were careful to map out the trajectory in the first year and give everybody purpose and backstories that are worthwhile and also pay off in seasons to come. We had a group of people who were dedicated to creating a lot of story rather than just vampire-of-the-week stuff.”

A key part of the development process was establishing the ‘rules’ of the show and the extent to which Van Helsing would fit into established vampire lore.

“People have preconceived notions about what vampires are, especially if you’re connected to Bram Stoker, so we’ve had to be clear about how we feel about crosses, garlic and mirrors,” LaBute notes. “We had to put a stake in the ground. You have to say, ‘This is where we’re going to be.’ We’re aware of the myths but we’re going in other directions. I’m sure there are things we missed that people will be happy to point out along the way!”

Finding a balance between story and action proved one of the biggest challenges of the first season for LaBute, who also gained his first experience of working in a writers room. But he reveals the plot is relatively contained for half of the episodes as Vanessa and her band of survivors rally together inside a hospital as vampires attack it.

“I hope part of why they brought me in was to create drama between the survivors,” the writer says. “Vampires are only part of the problem, they’re only one of the dangerous things out there. Many people are as dangerous or more dangerous than vampires because of what they are willing to do to survive.

“I think we have created a lot of human drama. You’ve got old-fashioned soapy drama mixed in with life-and-death moments. The Walking Dead was a great template for us. People fall in love, have babies, turn on each other, but every moment could be your last.”

And it’s that human drama that LaBute also hopes will hook viewers that wouldn’t call themselves genre fans and might not ordinarily tune into a weekly drama set in a post-apocalyptic world.

“I’m not a fantasy fan but I love Game of Thrones,” he adds. “I love medieval worlds and that drags me into a genre I don’t normally spend a lot of time in, and I hope people who don’t like vampires might find something else in the show. I want people to ask themselves, ‘How would I thrive or survive if all the things I know have come to an end?’”