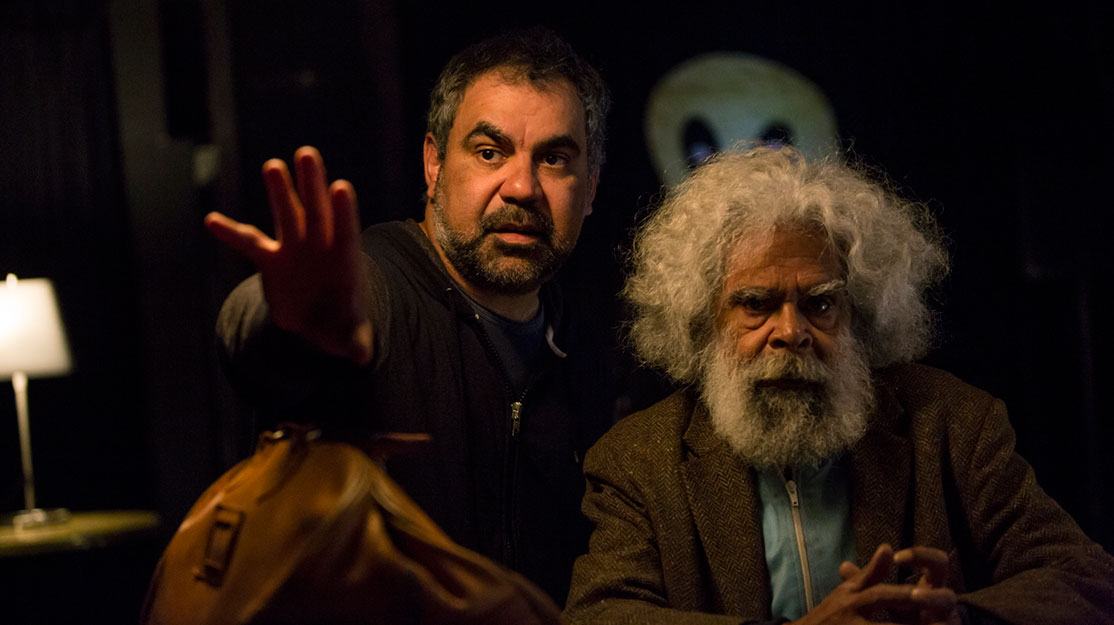 Smart TV: Get the lowdown on Cleverman

A new Australian drama blends Aboriginal history with contemporary culture in a futuristic landscape. DQ meets the team behind Cleverman.

It’s a groundbreaking new genre drama heading to screens in Australia – but just how can one describe Cleverman?

Set in the near future but rooted in Aboriginal history, and using a blend of CGI and traditional make-up and prosthetics, the show sees a group of non-humans (the ‘Hairies’) battling for survival in a world where humans feel increasingly inferior to them – and want to silence, exploit and kill them.

In particular, the story focuses on two Indigenous brothers who are forced together to fight for survival in a land that is also home to otherworldly creatures.

The series is produced by Goalpost Pictures in Australia and New Zealand’s Pukeko Pictures for ABC TV Australia, with SundanceTV and distributor Red Arrow International coproducing. Wayne Blair (The Sapphires, pictured directing on set above) is the lead director, with Leah Purcell also behind the camera.

And it is exactly the uniqueness of the series that drew Glen to the project. “It’s just a very original script, which is where it always begins for an actor,” he says.

“It started with one of those very happy emails you get. It was very intriguing. I read the first two episodes and asked for more information about where the series was headed, and it took no persuasion.”

Goalpost also needed little persuasion to take the project on after receiving a pitch from series creator Ryan Griffen.

It was during an internship with Goalpost that Griffen first suggested a kids’ show called Dreamtime Detectives, which was based on storytelling traditions rooted in Aboriginal mythology and aimed to help children understand different cultures.

But when the project went out to public broadcaster ABC, “they kept asking to age it up, and with Dreamtime stories, a lot of the consequences are death,” Griffen explains. “You can’t put that in kids’ television, so we progressively aged it up until we got to a point where ABC said if we really wanted to push it, this would be the home for it. We jumped for that opportunity straight away.”

In Aboriginal culture, the title of Cleverman often refers to a man of power within a clan who provides the conduit between dreams and the real world.

Speaking about the show’s origins, Griffen says: “Early on, it was about creating an indigenous superhero but also looking at the idea of identity and how change in even the smallest form affects everyone. And we’ve kept on building that from when it was something very small to where it is today.”

Goalpost producer Rosemary Blight adds: “It’s just so distinct. It’s 60,000 years of storytelling. Ryan, as an Aboriginal man, comes from this line of stories. There aren’t books that provide the chance to sit and read these stories, so they haven’t really been explored. There are thousands of different dramas but there’s no Cleverman, because of where this story comes from.”

Blight describes the partnership with coproducer Pukeko Pictures as “like a glove; it was a very natural fit.” But what was it about Cleverman that ensured Pukeko, too, wanted to come on board?

“This is about cultural issues we’re facing now – the integration of cultural difference, how we get on as a people, how we go on that journey of bringing others in and not being scared of them. So while it’s a genre piece, it’s absolutely and most amazingly an engaging story of now.”

Glen echoes Baynton’s views: “Fundamentally, the series is about how you live with others in society, which is really pertinent today as we see swathes of people leaving their homelands and trying to belong in other areas of the world. That’s the strongest theme within Cleverman and it’s why it should be very universal. You don’t wish it to be the case but it has a horrible relevancy.”

The universal themes contained within Cleverman also resonated with Henrik Pabst, MD of Red Arrow International, who believes the story holds huge international appeal. The series received its world premiere at the Berlin Film Festival earlier this month and is set to debut down under in mid-2016.

“As a distributor, I think about how I can differentiate,” he says, reflecting the need of broadcasters around the world to offer programming that stands out from the crowd. “I can have the next cop show or I can try to reposition myself and find a niche. Broadcasters tell me they need an audience to come to them, so they can’t have average programming. They need something different – and Cleverman is that. I’m really interested in seeing the results. I’ve got interest from broadcasters I’d never thought of. Commercial broadcasters are looking broader and asking if Cleverman provides something for their audience because the topic is so relevant, and that’s what we love.”

To create the look of the Hairies, Cleverman’s creative team sought out Pukeko’s Oscar-winning sister studio Weta Workshop, which together with production designer Jake Nash brought the creatures to life.

Initially, Nash worked with Griffen, Goalpost and Pukeko to begin exploring what these characters and the world they inhabit looks like. “It’s such a great project and something I connected with strongly,” Nash explains. “As it’s an Aboriginal story and I’m an Aboriginal man myself, it connected personally and culturally in a contemporary world. For Ryan to tell this story, it’s the continuation of our culture, which is so exciting.”

One Cleverman creature in particular, the Namorrodor, described as a flying serpent, also comes from Aboriginal culture, so the team had a starting point from which to build the character. “Ryan came forward with a good brief and there were some original artworks that we used to inspire us, and that was really important,” says Nash, who also took on the role of Cleverman’s Indigenous advisor.

“With everything on this project, we started from the bottom and worked our way up. What does this character eat? How does he move? What’s his attack mode? We had this list of questions that we had to answer and that began to shape what our characters looked like, which was a really fun process. You learn so much about the characters.”

Ideas and designs were then sent between the team and Weta’s New Zealand base as the creatures began to take shape. Many of the special effects were achieved on camera, ensuring a balance between CGI and traditional character design.

“The creation of the Hairy family is pretty special – you’ve never seen anything like them,” Nash adds. “They are amazingly unique and I think we’ve done a great job.

“For Australia, Cleverman is a first. It takes us out of realism and into genre TV, and that’s really exciting. It’s a story rooted in Aboriginal culture, it’s genre-based and has
an international and Australian cast. Viewers are going to eat it up – it’s great, it’s the next big thing.”

Of course, HBO’s Game of Thrones is often cited as the benchmark for contemporary genre fiction – and Glen admits the show, in which he plays swashbuckling knight Ser Jorah Mormont, has been a game-changer in the industry.

“It took what was perhaps a tired genre, or one that people were nervous of, and made it the biggest global hit ever,” he says. “It’s blown out of the water any notion that TV is a small-screen affair because there are film budgets for pretty much every episode. Not every drama needs vast amounts of money to make it look good, but Game of Thrones changed what was possible and raised the bar.”

He adds of Cleverman: “When you start trying to describe what Cleverman is, it’s quite hard. But at its roots, it’s a character drama. It’s about families, brothers and sisters, sons and daughters, mothers and fathers. And it’s about their relationships, which are universal and to which people can relate very easily.”