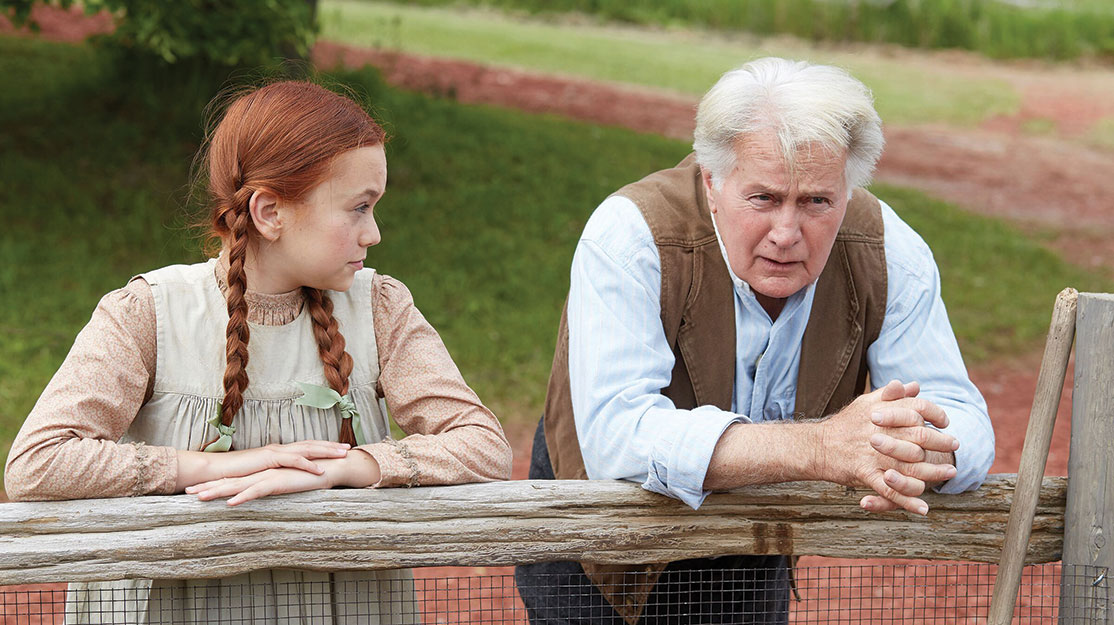 Golden Globe- and Emmy-winning actor Martin Sheen talks to Adam Benzine about his role in the remake of Canadian classic Anne of Green Gables, and looks back on his career.

Having played a president, a police chief and a federal judge, acclaimed actor Martin Sheen has taken on a different kind of authority figure in TV special Anne of Green Gables (pictured above), which premiered yesterday.

Sheen plays Matthew Cuthbert, who – along with his sister Marilla – adopts the titular orphan Anne Shirley in the classic 1908 novel, from author Lucy Maud Montgomery.

In Canada, the book was most notably adapted into an iconic two-part miniseries in 1985, starring Megan Follows. The production garnered huge ratings for pubcaster the CBC and swept the board at the 1986 Gemini Awards.

“I didn’t know quite how iconic it was until I got to Canada and started working,” Sheen recalls with a laugh, talking to DQ by phone. “It’s a remarkable chronicle of a character and a reflection of rural people in rural Canada.”

The new version of the story was made by Breakthrough Entertainment and Corus Entertainment for youth-skewing Canadian network YTV.

It features “a different kind of energy” from the 1985 production, the actor says. “I hate to make comparisons and I don’t think it’s really fair, but the story resonates in the same way.”

The original miniseries, he notes, “was an iconic production, and was lauded everywhere for its humanity and humour and all. But I think what we managed to do, without changing the century or the story, was accent the dangers of living in an isolated community, on an island.”

Sheen adds that the special has gained a contemporary resonance by way of the ongoing Syrian refugee crisis. “It has a very intriguing kind of energy that resonates today – particularly when you think of all of the horrors that immigrants are facing trying to get into Western Europe from the Middle East, how many hundreds of thousands are coming. Our hearts go out to them; we’re made aware of the plight of these people who, through no fault of their own, are sent out there to try to make it in the world.”

The role of guardian seems a natural fit for Sheen, who is best known for portraying President Josiah ‘Jed’ Bartlet in acclaimed White House drama The West Wing, which ran for seven seasons on NBC from 1999 to 2006. The performance earned him six Primetime Emmy Award nominations across the show’s 156 episodes, which marked his longest TV commitment to date.

And while he has taken on shorter projects since, Sheen says he wouldn’t rule out another long-term commitment, although he notes that such a project “would be very hard to come by in the first place, because there are very few Aaron Sorkins out there,” referring to the drama’s creator and lead writer.

“I was once asked if I’d have done The West Wing if Bartlet had been a Republican, and I said, ‘If Aaron Sorkin wrote it, of course I would.’ Because I knew that he would be honest,” he reflects. “Anyway, I doubt that anything like that is forthcoming for me. But if it were, well, I make decisions based on the material and the offer, you know?”

One recent offer that appealed to Sheen was the chance to star opposite Jane Fonda, Lily Tomlin and Sam Waterston in Netflix’s original comedy series Grace and Frankie. The show launched its first season in May last year and has been renewed by the SVoD giant for second and third runs.

“It’s become a very unexpected hit,” Sheen says. “My commitment is for another five years, so I’m in for the long haul. It’s a very special project that came to me from Marta Kauffman, who created Friends, so the pedigree surrounding this – besides Jane, Lily and Sam, who all are old friends – is immense.

“This was an ideal project because it was only 13 episodes a season and I would be free to do other things in the off-season, so we only work from July to November. The series, thankfully, is going very well.”

Pressed on roles that might appeal to him in the future, the actor offers a desire to play characters “that are closer to myself, that reflect a measure of my own personal life,” Sheen explains, “my involvement in social justice issues, per se.”

One such project he is currently eyeing is a new adaptation of Inherit the Wind, the 1955 play based upon an infamous 1925 court case that saw a high-school teacher put on trial for teaching Charles Darwin’s theory of evolution, contrary to a Tennessee state law. The play has been adapted for the screen numerous times in the past, with productions starring actors such as Kirk Douglas, Gene Kelly and Jack Lemmon.

“I presented a possible production to Netflix of Inherit the Wind, starring Sam Waterston and I,” Sheen explains, offering that Creationism “is still an issue in our country – people are still undecided in a large part of our country about the origin of the species. So, something like that… and some iconic theatrical characters still appeal to me. If I could do a character that is involved with social justice that would be very, very appealing.”

That said, he offers, half jokingly, that “the time has passed for Hamlet or Mr D’Arcy, I think… although I would never rule out a play.”

Stage acting, after all, served as the backbone of Sheen’s career early on, preparing him well for his work on camera. “I played Hamlet when I was much younger at the New York Shakespeare Festival,” he recalls. “All the theatre experience that I had, back in the sixties, stood me well for the rest of my career.

“I built a foundation in the New York theatre scene for 10 years, from 1959 to 1969, and I worked at some of the iconic venues, including The Living Theatre. I played on- and off-Broadway, and had a great learning experience all that time, which stood me well for the rest of my life. So I appreciate theatrical literature and I always look forward to that kind of a challenge.”

Certainly, Sheen’s acting pedigree made him a natural choice for Breakthrough, which produced Green Gables. The Toronto-based company has been aggressively pushing the 90-minute special to international buyers at recent markets such as AFM and Mipcom.

“When we began the thought process regarding Matthew’s casting, we wanted to make sure he exuded huge warmth, safety and security,” says Joan Lambur, the production company’s exec VP of family entertainment. “Martin came up right away because he has this very quiet and nuanced style – one that an audience immediately trusts.

“Because you have an 11-year-old girl capturing the heart of this older man, it’s important he emanates a sense of immediate grandfatherly love.”

In addition to his small-screen work, the now 75-year-old Sheen also continues to work on Hollywood features, having taken supporting roles in recent years on films such as Selma, The Departed and The Amazing Spider-Man.

But after playing central roles in two critically acclaimed films early in his career – Terrence Malick’s 1973 classic Badlands and Francis Ford Coppola’s 1979 masterpiece Apocalypse Now – Sheen is somewhat downbeat about his future as a lead actor on the big screen.

“The reality is that I don’t have that kind of high profile that you need to get into projects that are widely seen, big-budget movies and such,” he reflects. “I’ve been confined mostly to television, which is fine. And every now and then I will play or get an offer for a small or medium role in a major film, which is rare these days for anyone my age, and that’s fine.

“But I do still continue to get significant roles in television across the board, and that’s a big surprise to me, frankly,” he says, modest to a fault. “I keep reminding myself how lucky I am to still work at my age, and to still have credibility.”

And despite the challenge in finding roles that appeal, Sheen says he has no plans to retire. “I’m still in very good health, thank God, and I love what I’m doing. I’m lucky enough to still be working at my age and to be working on projects that I truly enjoy.

“I’ve always loved being an actor, and I love it now more than ever. I guess that’s as good a sign as you can accept that I made the right choice for a career.”