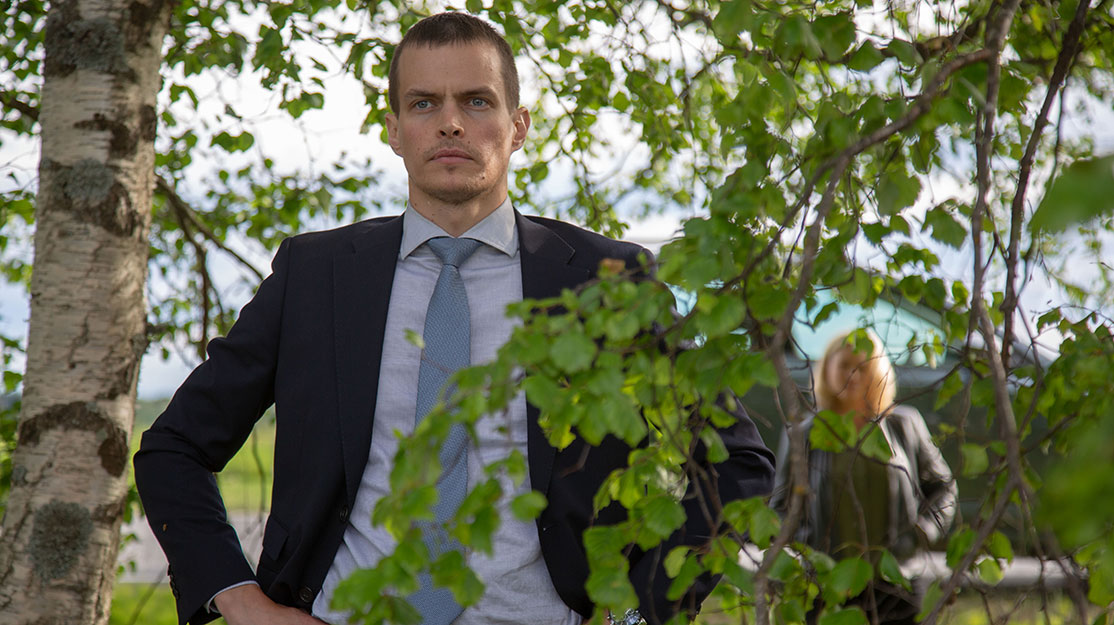 Johannes Holopainen speaks to DQ about heading the cast of Finnish drama All the Sins, its themes of religious oppression and why it’s not just another Nordic noir series.

Happy birthday Walter Presents. The UK streamer, which marked five years of operation earlier this month, specialises in non-English language-drama and has spread its reach to countries including Italy, Belgium, the US, Canada, New Zealand and Russia since its launch.

But given the Channel 4-backed service’s fondness for Scandinavian series, it’s perhaps surprising that crime drama Kaikki synnit (All the Sins) will be Walter’s first Finnish show when it lands on the platform this month.

Set against a backdrop of blue skies and open landscapes, the six-part series follows police detective Lauri, who is sent to his childhood neighbourhood of Varjakka to investigate a pair of brutal murders in this small, religious community. Lauri had cut ties with the town – home to followers of Laestadianism, an ultra-conservative religion – as a teenager and moved to Helsinki when his sexuality went against the beliefs of his family and the local people.

Now considered the best person to solve the case, Lauri, along with senior detective Sanna, is sent north, where suspicion immediately falls on the local anti-religion group. But in such a close-knit community, secrets are set to be revealed as Lauri comes to terms with his own upbringing.

“There’s a big boom in series in Nordic countries and Finland as well. It’s a wonderful thing,” says Johannes Holopainen, who plays Lauri. “It’s great to have lots of work for people in the business and also interesting to be making new, interesting stories and shows – and All the Sins definitely does stand out from the crowd.”

Holopainen believes the award is proof the show is “something special,” noting the fact it received a lot of attention on its debut in Finland for the way it turns the familiar style of Nordic noir on its head.

“It’s not trying to follow the pattern of colours, tones and moods. It’s a story about these characters who are facing very interesting dilemmas in their own lives, and the whole thing is connected to real-life issues with this religious group in Finland,” the actor explains. “The whole thing is dressed up as a crime drama, but the most important thing is the characters, what they go through and what the audience can experience with them in the show.”

Holopainen auditioned for the role of Lauri, giving him the chance to read the scripts at an early stage. He says he was immediately hooked by the drama, which begins with the discovery of a body hanging upside down from a barn’s rafters, leading to Lauri and Sanna’s deployment to Varjakka, which sits just outside Oulu on Finland’s west coast.

“It was so well written and so powerful that I got emotionally connected to the story and the character,” he says. “That is such a fortunate thing for an actor, to have a great script, because you can start working on the character immediately and the script gives you new information and new ideas each time you read it.

“The director, Mika, also gave me a book about the religious group in the story and I returned to that very often when preparing the character and during filming. I was connected with or reached out to people who had been part of the same religious group. Some of them shared their stories with me, which was a great source of information and understanding about Lauri’s life and how he is. All these things made this work such an important, personal thing for me.”

When viewers first meet Lauri, he is barely tolerating a counselling session with his partner, with suggestions that he can be angry and violent. But however reluctant he is at first to take up the case, his police work affords him an opportunity to face up to his childhood and potentially reconnect with his family.

“He’s not at peace with his past,” Holopainen explains. “For this religious group, if you’re a homosexual, you’re taught you will burn in eternal flames. So for Lauri, it’s a horrible way to live. If you’re in a very strict social structure and within a religion that teaches you a certain way of life, it’s very difficult to build an alternative reality. It took Lauri many years to actually find the courage to think, ‘There must be another way.’ Lauri took that step as a teenager and hasn’t been in touch with his mum, dad, brothers or sisters since.

“Then we go into the show and he starts to investigate the murder and tries to avoid his personal stuff. But since he’s around, he slowly starts to develop this interest in his family. He’s slowly looking at his past. When his mother tries to contact him, he is very reluctant and doesn’t want to go there. As the investigation goes on, the crime story intertwines with the character development. Eventually, it’s unavoidable to face his past and the difficult questions he’s being asked.”

Aside from Lauri’s personal challenges and the murder investigation at hand, All the Sins is notable for the central pairing of Lauri and Sanna (Maria Sid), whose promiscuity threatens to create problems for her throughout the series.

“We had very good chemistry and had such a good time,” Holopainen says of working with Sid. “It was so much fun and we really became good friends. It was great to work with her. We both shared this connection with the characters and wanted to make them real and were willing to give our personality to the work.”

The style of the series owes much to director Ronkainen’s documentary background, with Holopainen noting his handling of the show’s characters “as if they were real people, with the same kind of tenderness, caring and interest that also made it easy for me to focus on the work.”

“Working in another city than my hometown and spending two months shooting there also gave me an opportunity to be involved in the story and in the world, and helped me to focus on the character, which was something I really enjoyed,” the actor adds. “It was interesting to use different techniques and have such a good cast and crew.”

Launching on Channel 4 this Sunday before landing on Walter Presents, All the Sins dares to be something different while channelling themes that are both local to the show’s setting and universal for a global audience, Holopainen says.

“The characters are very local, northern Finnish people so it’s an opportunity to really see something that might seem quite exotic. It’s not another Nordic noir show with a grey colour palette and angry, moody characters,” he says.

“It has been called ‘Finnish weird,’ which I like. What makes it universal is this might happen in every society, because people have this need to belong to some group or other people, and sometimes this need is used in a bad way. This is what makes it possible for people to oppress others and why powerful people can become more powerful. For me, that’s always very interesting. People do bad things when they are trying to do good things.”