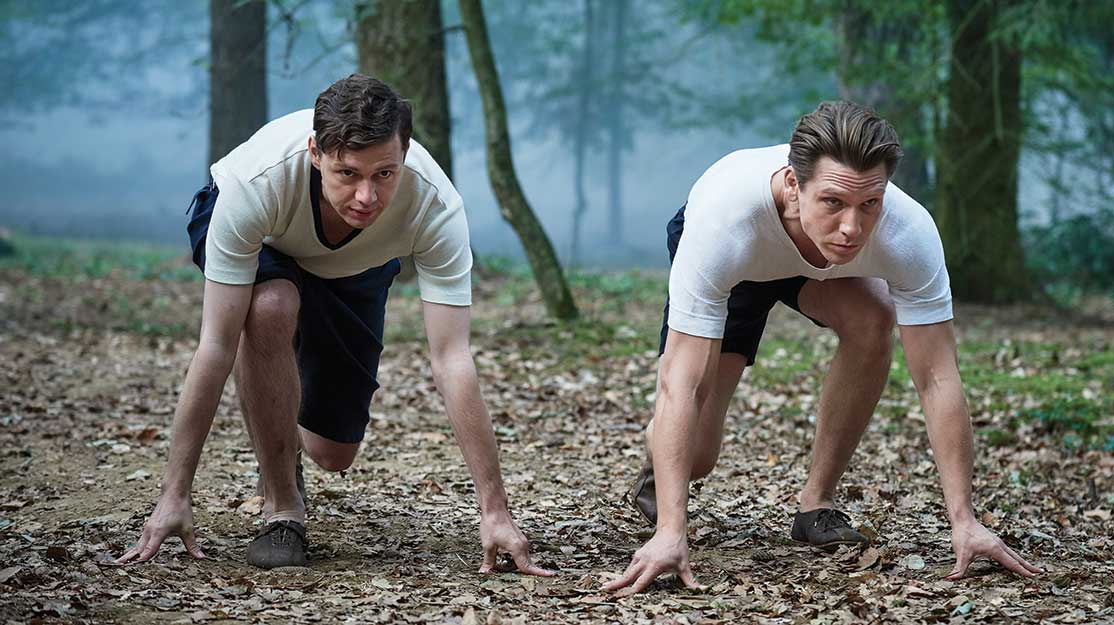 Running in the family

The rivalry between two brothers that led to the creation of sportswear giants Adidas and Puma is brought to life in a new German miniseries. DQ speaks to its creators.

They’re two of the biggest rivals in the world of sport – but this battle doesn’t take place in a stadium or arena. Instead, the origins of the conflict between sportswear giants Adidas and Puma can be found within a single German family as the story of two brothers is retold in miniseries Rivals Forever – The Sneaker Battle.

Set in the early 20th century, the show follows the Dassler brothers as their initial partnership sees them launch the sports shoe to international fame. But long-standing differences lead to mistrust and when they fall out, their relationship unravels and the business they founded together is split into companies that become two of the world’s biggest sports labels – Adidas, led by Adi Dassler, and Puma, run by Rudi Dassler.

Written by Christoph Silber and produced by Quirin Berg, Rivals Forever stars Hanno Koffler, Christian Friedel, Alina Levshin and Hannah Herzsprung. It comes from Wiedemann & Berg Television (The Lives of Others) in coproduction with ARD Degeto for German broadcaster ARD, and is distributed internationally by Global Screen.

“As producers, we’re always looking for strong topics and headlines that draw attention and create a reaction,” Berg explains. “The Dassler story is certainly one of the biggest family sagas recent German history has to offer, besides the fact we’re dealing with two extremely well-known brands that are loved around the globe.

“Most people in Germany have heard about the story without really knowing too much about it. That creates a perfect level of mystery and interest for a TV project. The true story itself is thrilling, dramatic and truly tragic – two brothers who share a vision and drive that vision almost to extremes but fail big time when it comes to keeping their family together. They change an industry but at the same time create a war within their family.”

In contrast with other biopics, where real-life stories are often fictionalised to inject extra drama or tension, Berg says the story of the Adidas-Puma battle needed no extra excitement as the Dasslers’ story is retold over a 50-year period.

Silber picks up: “The advantage we get from the brothers’ conflict is twofold: on the one hand, there’s an element of surprise because hardly anybody knows that behind these huge brands are two brothers who fought pretty much all their lives; and on the other is the narrative gain, because rather than having a typical biopic, you know from minute one to the end there’s always one element that holds everything together, the brothers, and that’s perfect for me as a writer.”

Berg says he was also fascinated by the story on a personal level, as he could relate to the central relationship: “I have a business partner who co-owns my company and he is my oldest friend as well. We went to school together and started to do films 20 years ago. So I could really relate to the brothers sharing one vision and fighting for it, building a company – and I was wondering what could happen to tear them apart? We’re sure it won’t happen to us and that’s something we definitely take from the story. The Dasslers paid a high price for being so competitive and successful. They sacrificed their brotherhood, their family.”

In terms of research for the three-hour series, Silber says there was already a lot of material concerning the brothers’ relationship in the public domain, adding that Adidas and Puma were very welcoming of the project.

“Those companies are no longer owned by the family, they’re owned by investors and shareholders,” Berg says, “so they are still competitors but today the big enemy is Nike. They were very open, collaborative and fair. The families are no longer involved and all the material is out there. There are hundreds of interviews and documentaries, so there’s a rich pool of information available for anybody who is interested.

“But, from a writer’s perspective, it’s always rewarding to meet people who are actually part of the story and it provides the benefit of adding details you wouldn’t find on the internet. Within the companies, we were lucky to find people who knew the brothers personally and had worked with them for years. That was very helpful – we wanted to find out as much as possible about the real characters.”

Silber’s television credits include crime series Tatort and Der Kriminalist. He also won an International Emmy for 2011 German-Austrian TV movie Das Wunder von Kärnten (A Day for a Miracle). Describing himself as a history and sports buff, he admits he doesn’t like “typical” period dramas, despite frequently working in the genre.

“I always want to peel away the veil of history and get close to the characters, which is why a sports-themed period film with the brothers aspect was so appealing. It already looks like you can’t have that veil over it,” he explains. “I did a lot of reading and talked to a few people, but it was a very collaborative process with Quirin. We’ve worked together for many years, we’re very hands-on with our work on stories. I need to be writing to get into a story so I do a lot of drafts. We work very well together.”

Directors Cyrill Boss and Philipp Stennert then joined the production, into which the creative team sought to inject a sense of speed and urgency, as if the brothers are racing each other against a backdrop of 50 years of history.

Berg says: “There are many examples of movies that have a great character and depict one crucial year or focus on a short episode in their life, and that has many advantages. But we wanted to tell the whole story, to give the big picture – so we decided to cover 50 years. And it’s so great to see not only the characters change over time but German society as well.

“Politics, fashion, quality of life – all those things that make and define a country changed over those years. We start shortly after World War One and end in the mid-1970s. That’s an interesting USP and not many German TV series offer that range. It’s not only about the brothers, it’s a ride through several Olympics and soccer World Cups, through German history, and we feel it’s something people will love.”

As such, one of the challenges faced by Berg and his production partner Max Wiedemann – who are behind Netflix’s first original German production, the supernatural thriller Dark – was to get every euro in the budget on screen while recreating half a century of time periods.

“There are several very crucial and budget-intensive sequences but our focus is on the family,” he says. “One of the biggest challenges was changing the production design and sets across the years. And obviously we have actors playing the same role over 50 years, so we had a great make-up team to make that happen. You want to stick with the same actor for all those decades so when it comes to make-up, it’s a tricky task but it worked well. You follow the same person and you almost feel part of the family at the end because they shared so many moments of their lives with you.”

Rivals Forever is the latest German drama set to warrant international attention, following in the footsteps of Deutschland 83, Generation War and Naked Among Wolves. Coincidentally, another German broadcaster, RTL, also ordered its own version the Dasslers’ story, with TV movie Duel of the Brothers – The story of Adidas and Puma. It premiered in March this year.

Berg says the self-financing German market is now opening up to seek investment from other territories, increasing the opportunity for German stories to be made for an international audience. “The whole industry is globalising more,” he notes. “In every country you will find amazing local stories that have a global scale. That certainly applies to the true story of Adidas and Puma and I’m glad we were able to pull this project off for ARD and an audience all around the world.”

Silber adds that 10 or 20 years ago, plans to tell the origin story of the two sportswear labels might have run into hostility, but those tensions have now cooled: “There’s been a generational change and the heat of that conflict isn’t so high any more. They’ve pretty much made peace and they can co-exist as two strong brands. Today it’s easier to tell the story, but the market has also changed. Germany is more eager to tell stories that reach out to an international market and don’t just focus on one audience. This story is ideal for that.”