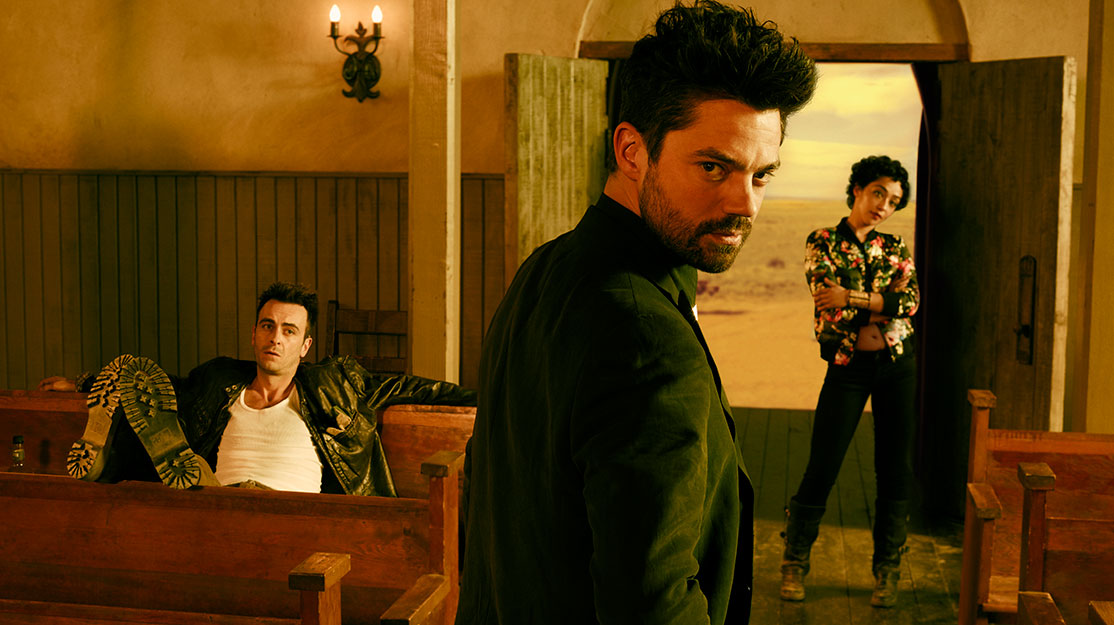 While the current trend for comic book adaptations has largely focused on Marvel and DC’s stable of superheroes, things are about to take a decidedly darker turn.

This Sunday, US cable network AMC launches Preacher, a 10-part series based on Garth Ennis and artist Steve Dillon’s books about a conflicted reverend in a small Texas town.

It tells the story of Jesse Custer, played by Dominic Cooper, who is inhabited by a mysterious entity that allows him to develop a highly unconventional power. He sets off with his ex-girlfriend Tulip (Ruth Negga) and an Irish vampire called Cassidy (Joseph Gilgun) on a journey to find God. Literally.

From the start, the series lays down its intentions with a blood-splattered sequence that alludes to what is to come, while those familiar with the original comics will know to expect plenty of action, violence, sex and some colourful language.

So when series showrunner Sam Catlin first picked up a copy of Preacher, his initial reaction is not unsurprising.

“When I first read the comic I thought, ‘We can’t do any of this,’” he admits to DQ while writing the final episode of the first season. “It was too profane and the scale of it was too huge and violent. I couldn’t get my head around it.

“But once we figured out how it could start, now there’s nothing in there I don’t think we can do with a little creativity. There’s sex detectives, angels, demons, cowboys and crazy violence and our plan is to do all of it, whether it means explicitly what’s in the comic or not, but in terms of Garth and his world, we have no plans to pull any of our punches, that’s for sure.”

The series, which is produced by Sony Pictures Television and AMC Studios, was developed and championed by Seth Rogen and Evan Goldberg – both longtime fans of the comics. Before he joined the project, Catlin didn’t know either personally and had never heard of Preacher.

“It was a crude commercial marriage at the beginning,” he says, frankly. “We had the same agent and they were looking to do the comic book that they love, which turned out to be great because we came at it from very different perspectives.

“They were huge fanboys and I wasn’t a big graphic novel reader at the time so it was a great marriage of fanboy and someone coming to it with fresh eyes. It’s been a great collaboration. I’ve loved working with them and they’re super-involved in the show. For huge celebrities, they’re super-down-to-earth and approachable, responsible guys.

“It always helps when you have Seth and Evan passionate about a project; it definitely helps any process. It’s a very ambitious show in terms of the resources AMC and Sony are putting into it and the creative lam we are walking out on here. Everyone’s really excited about it and we can’t wait to see what people think of it.”

In the beginning, that collaborative effort focused on how the show would start and what would remain from the source material, and which scenes, stories and characters would be held back.

“I wrote the script based on all those conversations we had and then I was on set while they were directing, so it was very much a hive-mind experience,” Catlin explains. “You hear so many stories about these types of things where people and personalities clash or the big, arrogant movie stars take over and throw their weight around. It’s just not been like that at all. I’ve become friends with these guys, they’re super-smart and it’s our show. I feel like it’s been a blissfully smooth collaboration every step of the way.”

To this end, the big change fans of the comics will notice is that it doesn’t open with Jesse, Tulip and Cassidy drinking coffee in a diner, learning how the preacher got his power. Instead, Catlin describes the early stages of the series as a prequel in terms of Jesse’s backstory. “But in no way are we not going to get to the other great Preacher stuff,” he adds. “Some stuff we actually bring earlier into the show than the comic does, and then some stuff we hold off until later.

“In a way, this first season is a lot more of an ensemble. A lot of the action takes place in this one little West Texas town – corrupt and soaked in sin. So we’ll meet other people in the town, some of Jesse’s parishioners. So it’s Jesse and all these people and then you have Tulip and Cassidy on either shoulder. But eventually Garth’s comic is very much a three-hander. And we’ll get to that. It’s just a question of when.”

Unlike a traditional novel, Preacher offers Catlin, Rogen and Goldberg a visual template from which to draw, and the showrunner admits Steve Dillon’s artwork has influenced them during production.

“We want it to feel like a TV show but we also want it to feel like a comic book,” he says. “So striking that balance is one of the big challenges of the show. It’s not like Dick Tracy, where it’s so stylised it feels like the panel [in the comic book]. To me, it’s more of a tonal thing. You want it to feel heightened. It’s not Breaking Bad – it’s not hyper-naturalistic in every single moment. It does have that playful, absurd comic book atmosphere to it. To us, it’s that Gonzo tone we’re really trying to honour.”

Preacher frontman Dominic Cooper’s previous TV credits include Marvel’s Agent Carter and miniseries Fleming. But it was his dual turn in 2011 movie The Devil’s Double, in which he played two characters, that meant the actor was on Catlin’s radar as they searched for their titular preacher.

On casting the star, he says: “He was presented to us during pilot season in LA and he’s very much a known quantity, which means – as the agents will tell you – he’s not going to audition. You have to offer him the part. It’s always very scary. But it’s all very professional now where they have actor reels, this slickly produced thing where you get to see highlights of Dominic’s stuff.

“There was so much good stuff on it but it was his work in Devil’s Double, where he plays Uday Hussein and his lookalike who is hired to be an impersonator for security reasons, that stood out. But we just didn’t know how good he was until we started shooting the pilot and we realised how lucky we’d gotten with his natural screen presence. We couldn’t be more thrilled about Dominic and the cast in general.”

Working with AMC, a network not known to shy away from graphic material (think The Walking Dead), has also ensured Catlin and his creative team haven’t had to tone down any element of the series, which will also air on Amazon Video in the UK, Austria, Germany and Japan.

“We keep waiting for them to act like network executives and say, ‘Can we make the character more likeable?’ and all those horrific notes you get. But AMC wants to do Preacher. They don’t want to do any sort of watered down version of the show. They’ve been great partners and they have a track record of success in pushing the limits of what you can broadcast on TV. They’ve been nothing but encouraging.”

Preacher marks the first time Catlin – best known for his work as a writer on another AMC hit series, Breaking Bad – has been a showrunner, a position he describes as the “ultimate job in Hollywood.”

“It’s definitely as much pressure as I had been told, as much terror,” he says. “It’s all that is advertised but it’s also a lot of fun. It’s very exciting building something from the ground up. As a writer, it’s the ultimate job in Hollywood, which is to be a showrunner on a great network like AMC. The amount of creativity, responsibility and authorship you have – there’s nothing like it. As hard as the job is, you don’t want to do any other job after this, that’s for sure.”

And with his experience on Breaking Bad, it’s only natural that Catlin looks to creator Vince Gilligan for inspiration now he’s in the top job.

“I’ve always had tremendous admiration and respect for Vince but ever since I became a showrunner I have that much more,” he admits. “Vince taught me everything about how to run a show and how to empower your writers and be diligent. Preacher’s very different from Breaking Bad and there are certain things that we do on this show that if Vince were dead, he’d be screaming in his grave. The rules are very different from Breaking Bad but his attention to detail, artistic integrity and the gentleman-like way he ran that whole operation is something I try to emulate as hard as I can.”