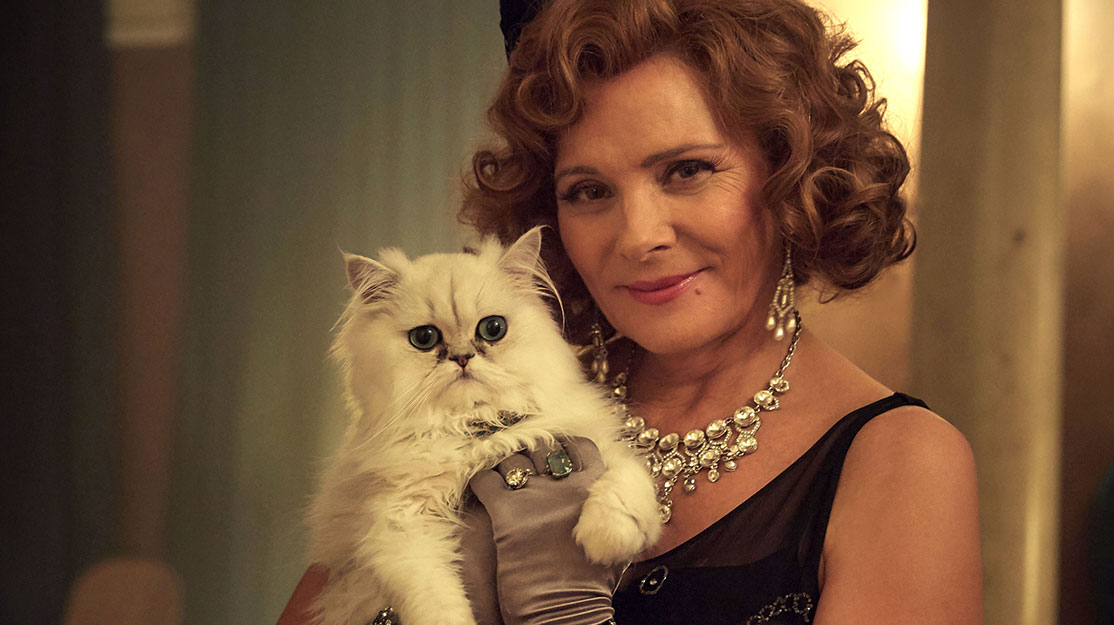 Writer Sarah Phelps reunites with Mammoth Screen and Agatha Christie Productions to adapt another classic Christie novel. Michael Pickard finds out more about The Witness for the Prosecution.

At just 23 pages long, Agatha Christie’s classic mystery novel The Witness for the Prosecution might seem a fairly lightweight proposition for a television adaptation.

But after the success of 2015’s And Then There Were None, writer Sarah Phelps and coproducers Mammoth Screen and Agatha Christie Productions have combined once again to bring another Christie tale to BBC1. It is due to premiere later this year and will also air on Acorn TV in the US.

“In the world of Agatha Christie, in terms of her iconic titles, it’s absolutely up there,” executive producer Damien Timmer says of the source material. “Some of her novels cast a very long shadow but The Witness for the Prosecution is one of her best conceits. It’s a very dark, twisted love story that collides with a big courtroom drama. It’s irresistible.”

Set in 1920s London, the short story opens with the brutal murder of glamorous and rich Emily French (played by Kim Cattrall, pictured top). All the evidence points to Leonard Vole (Billy Howle), a young chancer to whom the heiress left her vast fortune and who ruthlessly took her life, at least according to the housekeeper, Janet McIntyre (Monica Dolan).

“It is one of her absolute best stories,” exclaims James Prichard, chairman of Agatha Christie Ltd and the author’s great-grandson. “It’s got a phenomenal twist to it. Romaine is one of the best characters my great-grandmother wrote. It’s a great story and it deserves the Sarah [Phelps] treatment.”

The length of the original tale failed to faze Phelps, who was new to the story and has stuck to her rule of not seeing previous adaptations of a property she is working on. She also specifically wanted to adapt the original short story, rather than the 1953 play Christie wrote based on it.

“I wanted to do the short story because it was the one that grabbed my imagination,” she admits. “Even though it’s incredibly brief, it builds up to this extraordinary twist and it felt exciting, like there was a lot of room in it for extrapolation and interpretation and creative input.”

She adds of the adaptation process: “It’s always about finding the story. You can have a novel that’s 800 pages long or a 20-page short story, but it’s always about asking what the story is. Whether it’s finding the key line through it like with Great Expectations, or with Witness, it’s the tiny little mentions and suggestions that make me think of something and it just sort of breathes and grows. I really enjoyed working on it.”

Published in 1925, it was one of Christie’s earliest works, set during a fascinating period of British history in which society was polarised between the rich and glitzy society life and the poverty experienced by many people in London in the years after the First World War.

“We talk about the glamour of the 1920s but the champagne, the shingled hair and the dancing on tables was only present for the proportion of the population who had money,” says Phelps. “Everybody else was caught up in a terrible postwar depression where people were starving. People came back from the war and pawned their medals and begged on street corners. So within those two extremes of that world, you throw in a story about money, sex and murder and it feels really explosive.”

Prichard continues: “There is this extraordinary disparity between the rich world of Emily and her ilk and the poorer world of Leonard, Romaine and Mayhew. Whereas And Then There Were None played towards the fears of the Second World War, this harks back to the after-effects of the First World War and how it impacted on everyone.”

Filming for the two-part drama took place earlier this year in Liverpool, which Timmer explains was a good match for a foggy 1920s London. “But we also needed locations outside London – big theatre set pieces and scenes set in the south of France,” he reveals. “We scouted all over the place and found Liverpool had more to offer than anywhere else. It has some glorious exteriors that do a very good job of passing for period London, arguably better than London itself.”

Telling a story that spans several different locations also presented a challenge for Timmer and Mammoth Screen, with just 120 minutes of screen time to fill.

“It’s two hours of television but in that time you’ve got to recreate large-scale courtroom scenes, London exteriors, 1920s vaudeville, big lavish scenes in the south of France and scenes in First World War trenches,” he notes. “We’re lucky to have [director] Julian Jarrold, who is one of our best filmmakers, and a pretty amazing production team assembled around him. We haven’t stinted at any of these things; the sheer scale of it is pretty remarkable.”

Phelps picks up: “It’s claustrophobic as well. You do spend a lot of time in the courtroom but it became a set of staircases and small rooms full of dark corners. It felt like place was really important and it was about creating a city around the people in The Witness for the Prosecution, all of whom were carrying this trauma of the war with them.

Collaborating with Jarrold was also a positive experience for Phelps, though the writer admits her scripts can be quite detailed in how she sees the story being brought to life on screen.

“I’m very descriptive with stage directions and almost what you could smell or feel if you were really there,” she admits. “I explain how cold it is or whether the carpet’s thin or so plush that your foot sinks in and leaves a footprint like Robinson Crusoe seeing a footprint on the beach. So that’s all there for anybody reading it to feel the world the way I feel it.

“You always have these conversations with your directors and you can tell people get really into it. Our art designer fell in love with the Mayhew house and was incredibly proud of the set. You have those conversations and you understand each other. The director and director of photography will also have thoughts and ideas of how to realise what I’ve written in the script, so there’s always got to be a trust and you’ve got to give people their own artistic licence.”

Timmer says Phelps is “brilliant” at adapting classic material. “Sarah claims not to have read any Agatha Christie so by coming to her work fresh and simply treating it as a classic novel, it leads to something very fresh in the world of Christie adaptations,” he explains. “Having been on the journey with her for And Then There Were None, we all felt her sensibility applied to Agatha Christie’s best stories is a very fruitful one.

“Sometimes people see Agatha Christie as much lighter than the writing actually is. They think it’s a very chintzy, Cluedo murder mystery but actually she is almost always much more complex than that. And Then There Were None was partly an exercise in making people reassess her and see quite how stark and dark and psychologically complex her writing can be, and Sarah is well placed to get to grips with that.”

Prichard says of Phelps: “She seems to be able to get between the lines of Agatha’s writing in a way that is very special. One thing she says is it’s an adaptation, it’s not a translation, so she does adapt, but to adapt means you’re working from the original and it has to be based in the original. And she does have this ability to take my great-grandmother’s stories and make them very real and bring them into a modern sensibility in a way I haven’t seen for a while. She’s just a great writer, and great writers create fantastic television.”

Following the success of And Then There Were None might seem daunting, but while Prichard admits that show was “the best thing we’ve done on TV ever,” he adds that with Phelps and Mammoth back at the helm, The Witness for the Prosecution could be even better. A+E Networks is distributing the series around the world.

“What Sarah and everyone else has brought to this is a different insight,” he says. “Everything Sarah puts in the story is in the original works if you read them properly. Particularly with Witness, which is just a short story, she’s added bits and given backstories but actually it all feels as if it fits within that. She’s taken a cough that the solicitor Mayhew has and she’s built a complete backstory around this one line in the book. It’s extraordinary how she gets this feel from these stories.”

Mammoth and Phelps will be back together again for another Christie adaptation in 2017, this time taking on Ordeal by Innocence, which is the first of seven adaptations the BBC will air over the next four years. Death Comes as the End and The ABC Murders will follow, with writers and producers to be confirmed.

“I’m in no way an aficionado of her work; all I can say is this is my take and this is what I think, what I see and what I think these stories are about,” Phelps explains. “But maybe because I’m unfamiliar with them, that unsettling quality perhaps comes across because I don’t have any prior relationship with them.

“I think she is an unsettling writer and she nails very succinctly and very forensically a sense of identity, a sense of Englishness where actually there’s a real tension to that identity – and there’s a tension to it because there’s a body on the floor and that body’s been murdered. They’re entertaining stories and deliciously plotted but there’s also something else going on, something quite worrying and dangerous.”

Having produced the long-running Poirot series for ITV, Timmer says he has a soft spot for the author and hopes to continue that relationship in the future.

“We’re relishing this chance to take some of the very best titles and treat them as standalone modern classics,” he adds. “As long as one can access those titles, we’re happy to continue as long as we’re wanted.”

tagged in: Agatha Christie Ltd, And Then There Were None, BBC, Damien Timmer, Mammoth Screen, Sarah Phelps, Witness for the Prosecution