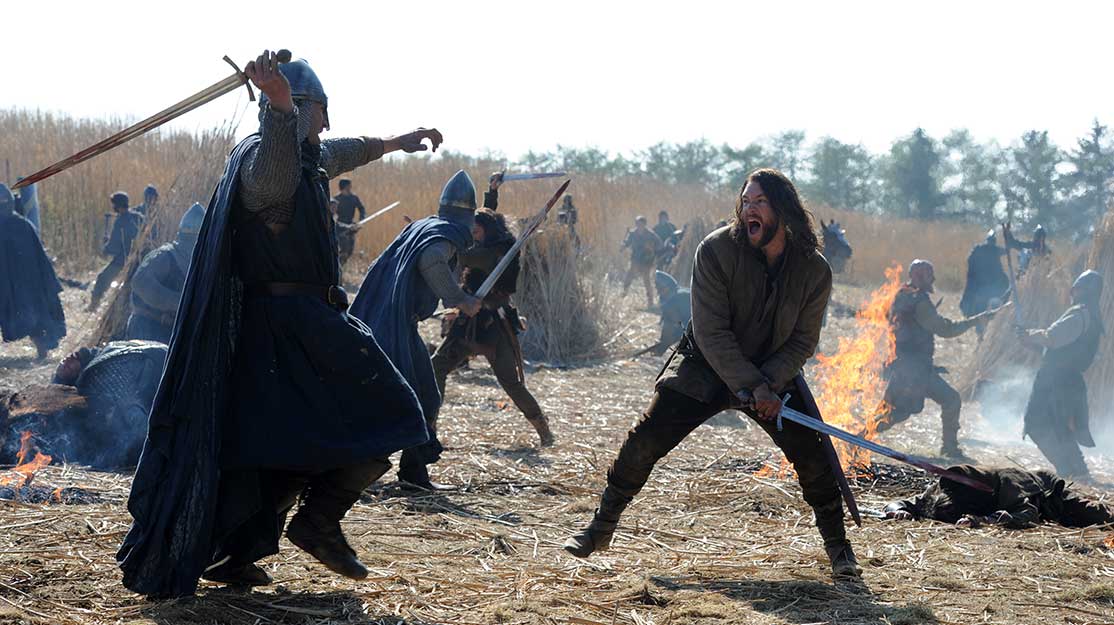 When US cable network FX commissioned bloody medieval drama The Bastard Executioner (pictured above), it was billed as the eagerly anticipated next act from writer Kurt Sutter.

Sutter had built his career at FX, first working on ground-breaking cop drama The Shield and then creating hit biker series Sons of Anarchy, which ran for seven seasons until 2014.

The Bastard Executioner, which made its UK debut this week on History, would represent an entirely different direction from his previous work. It was an ambitious Middle Ages drama that told the story of a warrior knight in King Edward II’s charge who is broken by the ravages of war and vows to lay down his sword. But when that violence finds him again he is forced to pick up the bloodiest sword of all.

Sutter developed the series from an idea from Brian Grazer, who executive produced the 10-episode show with Sutter and Francie Calfo.

And it was immediately clear how Sutter he had invested in the show, exclaiming at the time of its commission in May 2015: “I love history. I love theology. I love blood. It’s been very satisfying weaving fact and fiction to create a new mythology that combines all these elements. And with this extraordinary cast – Stephen Moyer, Katey Sagal and newcomer Lee Jones – this world explodes on screen.”

But as Sutter would discover, no amount of excitement can turn the tide of public opinion if the audience doesn’t share the same interest in your passion project as you do.

Writers and producers can spend years developing a series, often focusing on obscure or niche stories or time periods. But in most cases, they must build their reputations working on other shows before being given the chance – and freedom from a network – to bring their passion projects to life. And even if the story does connect, there is still a possibility the project could be undone by its execution.

Among the successes is Poldark, BBC1’s adaptation of Winston Graham’s novels, starring Aidan Turner and written by Debbie Horsfield.

When it first aired in 2015, no one could have predicted how quickly the show would develop a devoted following in both the UK and the US, where it airs on PBS. The series has since been renewed for a third season to air in 2017 – ahead of its season two launch this September.

“Poldark is a passion project for all of us, and it’s with real excitement that we prepare for both the launch of season two and our return to Cornwall to shoot season three,” said Damien Timmer, MD of Poldark prodco Mammoth Screen. “Winston Graham and Debbie Horsfield’s extraordinary flair for storytelling means the saga of [lead character] Ross, his friends and enemies will go to even more thrilling places!”

Writer/actor Mark Gatiss is a long-time fan of sci-fi series Doctor Who and has written eight episodes of the show since it was revived in 2005. But it was the opportunity to write a special film to mark the franchise’s 50th anniversary that proved a real labour of love. Gatiss, who also co-created Sherlock, penned An Adventure in Time and Space, which followed the creation of the series with David Bradley portraying the first Doctor, William Hartnell.

“The strange thing is, because I’m a Jon Pertwee child, this was before my time,” Gatiss said at the film’s 2013 premiere, referencing the third actor to play the Doctor. “But I grew up with the story – almost like a bedtime story – of how the show came together. These very unlikely people coming together… nobody liking the Daleks… all these little stories that were like holy writ.

“I always thought it would just be a fantastic story to tell and it’s just come together at the right time.”

Steven Knight may consider himself a film writer, having penned movies such as Locke, Dirty Pretty Things and Eastern Promises, but it’s in television that he found a home thanks to Peaky Blinders, a series that began life as a novel until Knight transformed it for the small screen with Nurse Jackie creator Caryn Mandabach.

When the series was given a two-season renewal by BBC2 following its successful third run earlier this year, Knight admitted: “I am thrilled at the response to the third season. The prospect of writing season four and five is truly exciting. This is a real passion project for me and I look forward to telling more stories of the Shelby family.”

More recently, Emmy-nominated spy drama The Night Manager was discovered to be a long-held passion project for star Hugh Laurie – so much so that the actor once tried to option the rights to the John Le Carré novel on which the show was based, only to find they had already been snapped up by Sydney Poitier.

“I can’t claim any credit for getting the thing off the ground,” former House star Laurie said. “I just told the producers that I would be happy to take any job on the production, as actor, caterer, anything I could do to make it go – I just wanted to be involved with it.”

Meanwhile, HBO’s The Night Of, an adaptation of BBC drama Criminal Justice, was a passion project for the late actor James Gandolfini, who championed the series that was brought to air last month by Steven Zaillian.

However, after disappointing reviews and lacklustre ratings, plus the departure of Winter and a change in management at the premium cable network, the show was cancelled in May after one season – reversing an earlier decision in February to order a second season after just one episode had aired.

“After careful consideration, we have decided not to proceed with a second season of Vinyl,” HBO said. “Obviously, this was not an easy decision. We have enormous respect for the creative team and cast for their hard work and passion on this project.”

Hoping to have better luck is forthcoming Amazon drama The Collection, which has been a long-time ambition for its creators, Oliver Goldstick and Kate Croft.

The series is set in an illustrious Parisian fashion house, emerging from the end of the Occupation into a golden age of design. The story focuses on two brothers while exposing the grit behind the glamour of the couture business.

“The Collection has been a passion project of mine for years; an entrepreneurial fable set in a pivotal moment in history, when fashion served as the ultimate vehicle for transformation and reinvention,” admitted showrunner Goldstick, best known for his work on US drama Ugly Betty. “It’s the story of a war-scarred family – upstairs and downstairs – tethered together by its success and its secrets.”

Croft, who executive produces the series and worked with Goldstick to develop the show, continued: “Out of our shared passion for the world and the period, Oliver has created his extraordinary vision of Paris and the golden age of couture. It’s full of his signature flourishes, and his unique take means we get to peek behind the elegant façade and realise it is not just about the dresses, but more about what they are covering up.”

The story is set in the 25th century when the human mind has been digitised and the soul is transferrable from one body to the next. Takeshi Kovacs, a former elite interstellar warrior, has been imprisoned for 500 years and is downloaded into a future he had tried to stop. If he can solve a single murder in a world where technology has made death nearly obsolete, he’ll get a chance at a new life on Earth.

“Altered Carbon is one of the most seminal pieces of post-cyberpunk hard science fiction out there – a dark, complex noir story that challenges our ideas of what it means to be human when all information becomes encodable, including the human mind,” Kalogridis says.

As for Sutter and The Bastard Executioner, the writer took the unusual decision to cancel his own show when it failed to connect with viewers – an announcement he made by placing an advert in several Hollywood television industry magazines.

“Good reviews are wonderful and so are awards, but for me, I’m very aware of ratings because my job as a storyteller is to engage and hook an audience,” Sutter said. “Ratings let me know that I’m doing my job. This show premiered low, and we never really established a baseline where we could say, ‘OK, that’s our audience.’”

He added: “When a show gets cancelled, there’s often this perception that, oh, it’s a failure, or the network didn’t support it and pulled the plug. That couldn’t be further from the truth.

A common saying among writers is only write what you love – why waste your time on anything else? But with passion projects, there will always be a risk that the audience might not care as deeply as those who created it.

As Sutter concluded in his advert: “The audience has spoken and unfortunately the word is ‘meh.’ So with due respect, we bring our mythology to an epic and fiery close.”