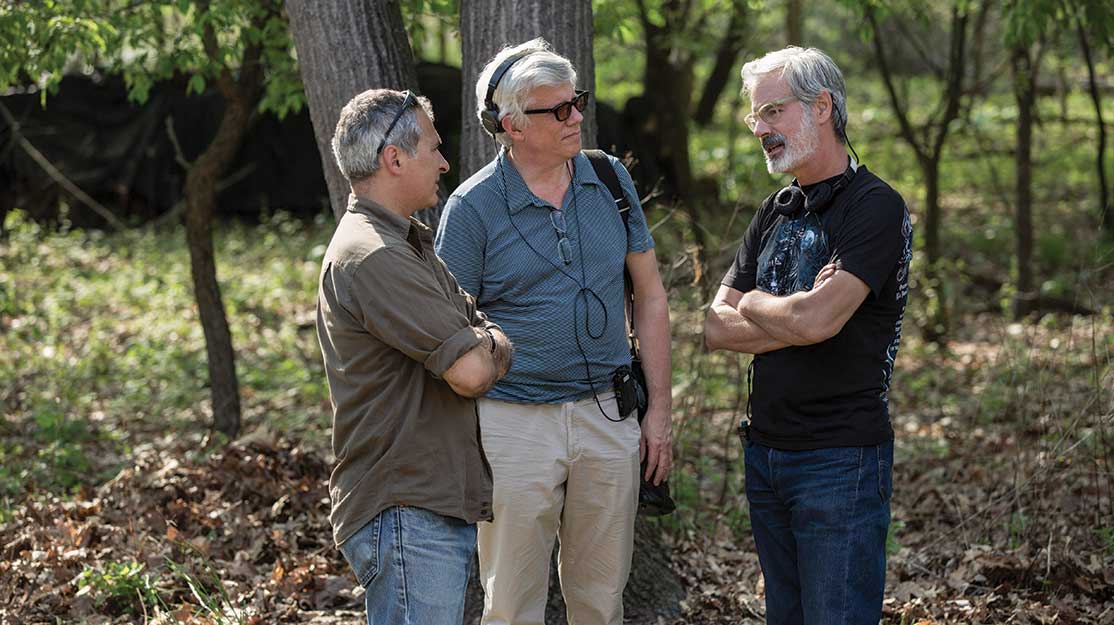 After initially being told his script wouldn’t find a TV home, Outsiders creator Peter Mattei says he found the perfect fit in WGN America. He tells DQ how his story of renegades who clash with the modern world came in from the cold.

Novelist, playwright, filmmaker, screenwriter – it’s fair to say Peter Mattei (pictured above right) has more titles than most. So it’s a sign of the ongoing strength of television drama that he chose the small screen as the medium for his latest project.

Outsiders marks US cable channel WGN America’s latest foray into the world of original programming. Described as a struggle for power and control set in the rugged hills of Appalachia, the series focuses on the Farrell Clan, a tight-knit family of renegades who have lived atop the rugged Shay Mountain for more than 200 years, and their fight to defend their way of life from the town below and anyone who would dare to challenge them.

“I had pitched and sold a batch of TV ideas over the years and none of them really went forward,” Mattei explains. “I wasn’t sure whether I should do this one as a novel or film but I saw it as a longform story. The kind of independent films I’m interested in aren’t being seen and it’s hard to get money, so the idea of doing it as a TV show was more appealing.

“It’s a great time to be doing longform novelistic stories. I wanted to do it as TV but I knew it wasn’t pitchable because it’s so strange, so I just wrote it.”

Mattei says the series was inspired by a number of contemporary issues facing the US, notably in terms of politics and the financial crisis, gentrification and the idea of freedom.

“I was interested in this idea of people living an alternate lifestyle, in cults and communes,” he says. “What if there were people living a lifestyle that people were living 200 years ago and were determined not to change? What would happen if these people were discovered living among us and their way of life was threatened? What if they were illiterate? And the ideas fell in together.”

The author of 2013 satirical novel The Great Whatsis, Mattei wrote the pilot script for Outsiders (originally called Titans) and for a few years was told by friends in the business that it was a great idea but one that wouldn’t fly on television.

Unperturbed, he passed it to his agent, who also represents Giamatti, and they teamed up to take it out to the networks. Arriving at WGN, Mattei was impressed by the broadcaster’s ambition and immediately felt it was a perfect fit for his show.

Equally impressed, WGN gave Outsiders a 13-episode straight-to-series order, following in the footsteps of its earlier original series Salem and Manhattan. It makes its debut on the network tonight.

“They’re an upstart, similar to AMC when they did Breaking Bad and Mad Men,” Mattei says of WGN. “They’re looking for interesting, edgy material to differentiate themselves and have a straight-to-series model. They also loved the material and it seemed like the perfect fit. After a period of writing, they decided to move forward with it and they brought in Sony as a co-studio (with Tribune, the production arm of WGN parent Tribune Media). I knew I needed a partner and Sony brought Peter (Tolan) in. He loved it too.

“It still feels surreal. This was a very strange idea I cooked up and wrote very quickly – I didn’t think about it too much. I wasn’t trying to sell anything. I wanted to write something I thought would be cool on air. A year later, seeing it coming to life, it’s very surreal. Since I had never made a show before, I felt like I was a student of the process and absorbed everything from Peter. We put the writers room together. It was incredibly daunting to plot 13 episodes of a show when I had barely scratched the surface.”

Though Mattei worked alongside Tolan to run the writers room, he says being a showrunner is different to anything he has done before.

“Showrunning is definitely one of those things you can apprentice if you’re working on a show, but if you’ve never done it before, there doesn’t seem to be a playbook,” he says. “Everyone does it very differently. For me, having the equivalent of four full-time jobs was really hard. I was the only writer on set and the only producer on set.

“The experience was twofold: the time I was in LA with the writers room and plotting out the season’s story arc, and being in Pittsburgh during production. Because it was a made-up universe, it was very different to anything everybody had worked on before. It’s not a lawyer show where you know how everyone behaves. I don’t know how my characters talk or how they dress. I had lots of ideas and also the way this story looked was very important to me. I wanted it to be very cinematic. We just shot a 10-hour movie in 13 parts.”

The look of the show was so important to Mattei that he put together a 60-page presentation outlining the appearance of both the world of the show and its characters – drawing inspiration from such groups as bikers and gypsies – and the style of music that should be used. He also worked with director Adam Bernstein to hire the director of photography and costume and production designers.

“I really got involved more than most showrunners do in terms of production,” he says. “We wanted it to be really cinematic so I wanted to be on the ground.”

Mattei values the work of his collaborators and says he is keen to let people have their own voice. “I just want to make sure what we are doing is the best thing we can do,” he adds. “This is the first year of the show and it’s such a made-up fantastical world that there was a lot of back and forth with the actors and designers about what the show would be. By midway, we knew what we were doing and I felt confident I would know the answer to any question people could ask.”

“When we set out in casting, we just wanted great actors in every role as opposed to having specific ideas of the look of a character,” Mattei says. “We were very lucky because when the script got out, there were certain actors who came to us.

“We were overjoyed when we heard from David Morse. He was someone whose name I had thrown out as the kind of actor I wanted to work with. He’s an actor’s actor. All our actors were really smart about their characters and their story arcs. It was a very collaborative process where they would give feedback on stories. We did table reads and a lot of rewriting based on those.”

Having taken a series to air after several false starts, Mattei says he now cannot imagine doing anything other than television. “I’m a dilettante; I like to try everything. I’m sure at some point I would love to get back in theatre – it’s been 20 years – and to make a film as well. For the moment, this is an incredible moment for US TV. I hope it lasts. It feels to me like when I got into making films and was in the middle of the independent film community at Sundance. TV feels like that, filled with excitement and so many people making smart stuff. It’s full of energy where lots of things are possible and really great work is happening.

“Mr Robot is amazing. It’s incredibly good. I also liked Black Mirror – that was a real masterpiece. When there’s stuff out there like that, you get really inspired.”

Looking back on making the first season of Outsiders, Mattei describes it as “easily the most intense experience” of his life.

He adds: “I was not at all prepared for how demanding it would be to run a show like this. I fucked up a lot of stuff and struggled with a lot of stuff. We all did. It’s one of those experiences. It’s really quite a journey. It’s so much more intense than making a film. We were taking 15 days to make 90 minutes, not 30 days. The pace is daunting. We have been through a war together.”