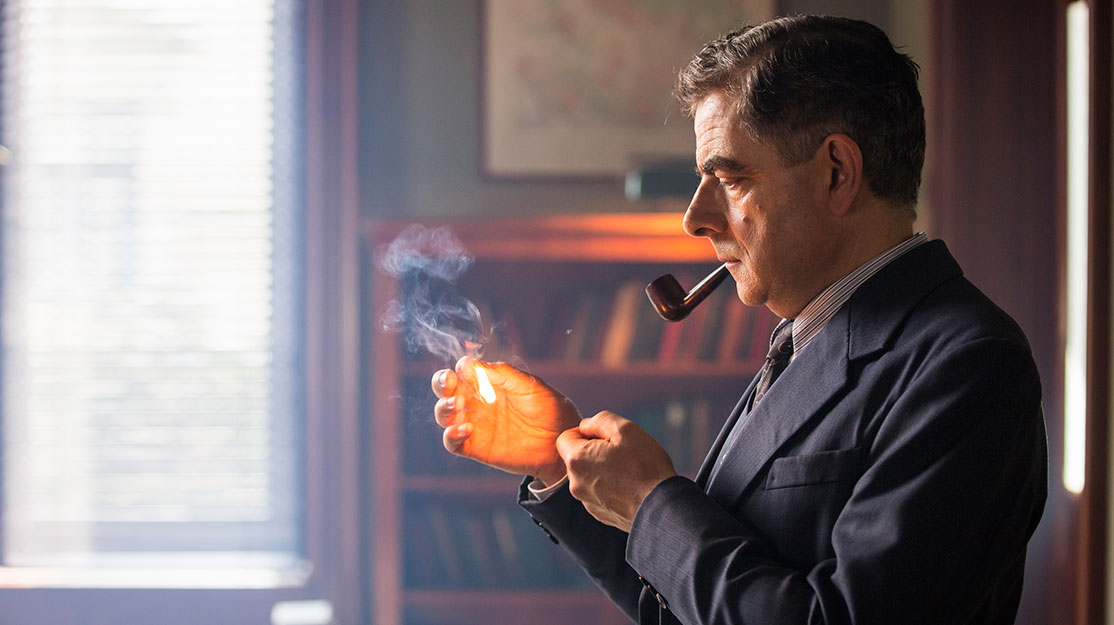 French detective Maigret returns to television in the guise of actor and comedian Rowan Atkinson – who reveals he initially turned down the role before deciding to star in two ITV films set in 1950s Paris.

From Mr Bean to Blackadder, Rowan Atkinson is known to embody rather odd, eccentric and extroverted characters on television.

But for his latest small-screen role, as French detective Maigret, he’s chosen to play a character he admits is just an ordinary man – an observation that meant he originally turned down the role before agreeing to star in two standalone films set in 1950s Paris for UK commercial network ITV.

“It took me a long time to decide to (play Maigret). In fact, I think I decided not to,” he recalls. “I thought about if for some weeks and thought perhaps not. It went away for a while and then came back. So I thought about it for a lot longer and decided I would.

“The character is a very ordinary man and, generally speaking, I haven’t played many ordinary men. I tend to play rather odd men or more characterised people – people with a slightly odd or eccentric or more particular attitude to life.

“The problem with Maigret is he hasn’t got a limp, he hasn’t got a lisp and hasn’t got a French accent and has no particular love of opera or those other things people tend to attach to fictional detectives. He’s just an ordinary guy going an extraordinary job in a very interesting time.”

Maigret’s reserved personality, coupled with the demands of modern television drama for low-key and naturalistic acting, meant Atkinson doubted he could do the role justice.

“I like to relish words, sentences and phraseology and there’s not much facility for that,” the actor explains. “I wasn’t sure I could do it. I found it difficult when we were shooting and it was a couple of weeks before I found a way to deliver those lines. So my worries of many months before had been justified. I found it a difficult way of being.”

“Maigret is not that ordinary,” he explains. “Three words characterise him – his humanity, empathy for the victims and the criminals and a touch of vulnerability. When I met Rowan for the first time, it was obvious he had all these qualities. It was just up to him whether he was going to do it – but I never had any doubt about it. And when I saw the film, I know I was right.”

In fact, Atkinson’s growth into the role is reflected in Maigret’s battle to catch a killer in the first ITV film, Maigret Sets a Trap. As the drama opens, the detective is facing mounting pressure as a serial killer continues to stalk the streets of Paris after murdering four women.

It is due to air to UK audiences on March 28. The second film, Maigret’s Dead Man, will air later this year.

Simenon describes Maigret Sets a Trap as “a classic Maigret story” and the perfect plot to introduce the pipe-smoking detective to a new audience.

“It’s been adapted several times and with good reason,” he says. “It’s a good introduction to him, to what he stands for, to the pressure he can live under, and his relationship with his team and with his wife. It was a good opportunity to introduce and titillate a little bit the various aspects we will explore in the next film because you realise each book is very different in the way it was written and all these elements aren’t as clear as in this one.”

Production on the two films took place over 10 weeks in Budapest, which stood in for 1955 Paris. The Hungarian capital proved to have the right style of architecture for the period without the clutter of Western European street furniture, while also being a considerably cheaper filming location.

But on the back of the UK’s new love of foreign-language drama, was there ever any consideration of producing Maigret in French?

“Never,” says Simenon, who adds that it was also important the actors didn’t use “strange accents” while speaking English. A decision was made early on, however, to feature French newspapers with French headlines.

Atkinson continues: “You’ve just got to decide what your convention is and stick with it and hope the story is told as well as it can be within the convention you’ve established – English words with English accents but French newspapers with French headlines. That was a decision made early on. I remember the first draft of the script had the newspapers with English headlines and the decision was made not to do that.”

Playing Maigret might be seen as the actor taking a step away from comedy and moving towards more serious roles. But Atikinson insists this isn’t the case, adding that actors take the parts they’re offered or that inspire them.

“I would never wish to say I’d finally waved goodbye to any character if I feel as though I can still play him,” he says. “The emphasis tends to shift but you shouldn’t be too absolutist about what you play and don’t play.

“Prior to 2008, I’d said I would never play a part that had been played before – because no one had played Mr Bean before or the Black Adder or Johnny English. They’re roles you create. Then I got offered the role of Fagin in a revival of the musical Oliver and I thought, ‘Well, that’s a fun thing to do. It has been played before extremely successfully on film and stage but I shouldn’t let that stop me having a go.’ So I had a go and it seemed to work. Yet again, I’ve broken my own rule by playing Maigret.”

Having built his career in comedy, Atkinson also wishes not to be seen to be in search of some form of respectability by taking roles in more serious dramas.

“It’s quite weird the way the arts community still has a long-lasting cynicism of the importance or artistic value of comedy, which is just farting about for money,” he explains. “Whereas as soon as you play a serious role, now you’re an actor, you’re doing something of meaning.

“I’m not looking for anything other than an interesting role to play. And when I play a serious role, I feel I’m using exactly the same skills as when I play something comic.”

No further films have been commissioned by ITV as yet but Atkinson, with his typically glass-half-empty outlook, admits he is thinking neither ‘never again’ nor ‘I can’t wait to play that part again.’

“If we made more of these, I might let (Maigret) out a bit,” he suggests. “He’s terribly self-contained, not that I would ever want or wish him to be any more comic. In the second film, he’s a little bit more ironic from time to time. But that’s just work in progress. I wouldn’t like to claim we are perfectly formed straight out of the box – either the programme or the character – but I think it’s what I call an optimistic start.”