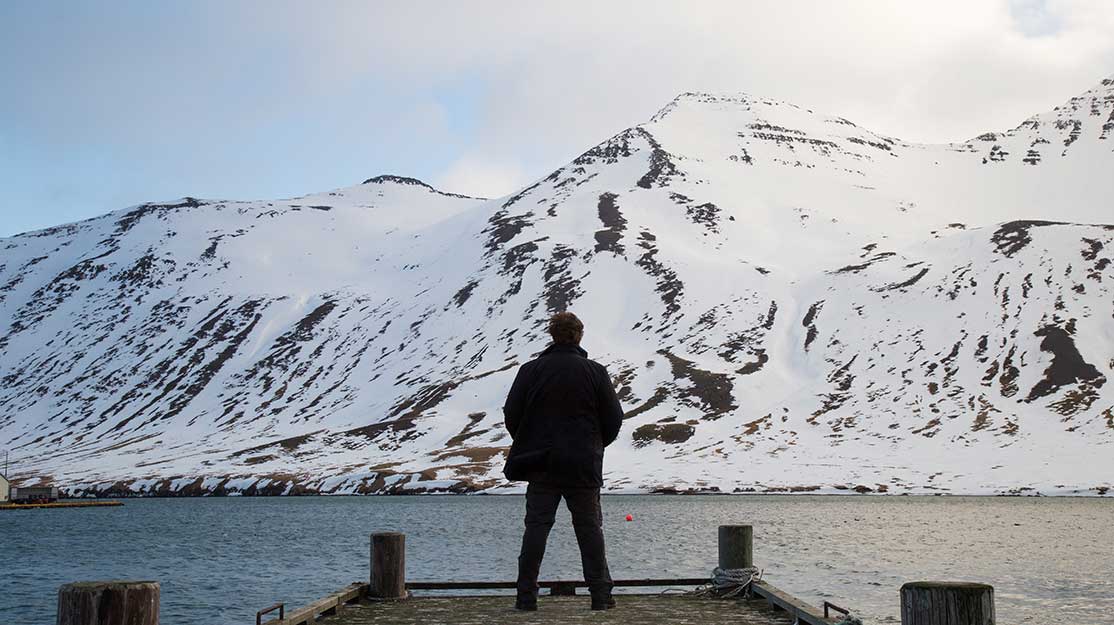 Klaus Zimmermann and Clive Bradley reveal how they kept crime thriller Trapped grounded in its Icelandic setting while navigating the tricky waters around this intricate international coproduction.

While international coproductions perhaps no longer seem the terrifying prospect they once were, the story of how Trapped came to air may still send shivers down the spines of some television executives.

With nine different broadcast partners on board, making the series – created by renowned director Baltasar Kormákur (Everest) – looks a frightening task from the outside. But executive producer Klaus Zimmermann (Borgia) and writer Clive Bradley (The Killing Gene) say those fears are misplaced, as all partners worked together to create an authentic Icelandic drama that takes the popularity of Nordic Noir into new territory.

The 10-part series opens with snow falling as a ferry from Denmark pulls into a small Icelandic port. With 300 passengers stranded until the storm passes and with the main road into town impassable, a mutilated and dismembered body washes up on the shore – leaving a local police chief convinced a killer has arrived. As word of the death spreads, order descends into chaos as the ferry’s passengers and the town’s residents realise they are all possible suspects and that a killer is trapped among them.

Zimmermann joined the show in 2013 when Kormákur approached him with a project that he couldn’t get off the ground.

“I looked at the material he had worked on and the general idea was already there,” Zimmermann explains. “I took on the development and started to look for a team of writers who could make this more international without breaking the authentic charm of the show.

“Besides the original Icelandic writer, I identified Clive, with whom I’ve worked before. We went to Iceland and worked from scratch by imagining what a show needed to please an international audience. It took us a while to go back to the material, to develop the strong story arcs and strong characters, and after two months we had a new script.”

Several broadcasters had already turned down the project but, undeterred, Zimmermann went back to them with the new script. Germany’s ZDF joined as a coproducer, with plans to air the show in its popular Sunday evening Nordic Noir slot. France Télévisions also came on board, followed by the BBC.

They joined Iceland’s RUV, SVT in Sweden, DR and DRK in Denmark and Finland’s YLE, while The Weinstein Company took rights for the US.

Trapped launched in Iceland in December 2015 to a 90% share of the audience – the biggest in the country’s TV history. Launches followed in Norway in January and France and the UK in February this year, while March saw the show’s arrival in Sweden and Denmark. The German debut is set for this autumn.

“The idea was never to make an international show set in Iceland, like Sky did with Fortitude,” Zimmermann says. “We wanted to do something that specifically made the audience come to Iceland and witness how people live, what the troubles are; to create a really authentic drama.”

Trapped had originally been plotted in Icelandic, the language in which the show is filmed. But an English treatment was written up and sent to Bradley. He then wrote the script in English as part of a mini writers room that also included Zimmermann, French writer Sonia Moyersoen and the original Icelandic writer Sigurjón Kjartansson – who translated the finished scripts back into Icelandic for filming.

Bradley, who describes joining the project as a “no-brainer,” explains: “Klaus set up a fantastic system where, after I wrote two episodes, we’d meet for a week and plan the next two, and then I’d go away and write them in English.

“Sigurjón was always the one to check what I wrote. In my first draft, I had some people with umbrellas because the weather was terrible – but apparently people in Iceland don’t use umbrellas. There were other interesting points, like if you write that a cop goes home and has a glass of whisky – well, no, he doesn’t in Iceland. Instead, he has a glass of milk, which is a lovely detail. Because it was an Icelandic project in the first place and because of Sigurjón’s involvement, we were always grounded in Icelandic reality.”

Zimmermann adds: “We worked out the stories together and then Clive would execute the script. We would all comment on that and once the English script was finished, it was translated into Icelandic by Sigurjón. There were some changes because of the translation. Icelanders speak with fewer words – there’s one scene where there’s a big drama and lots of dialogue and the actor just makes a ‘hmm’ noise. This is the translation, but it works.”

Despite the number of broadcast partners, Zimmermann says the success of the series’ development came down to the amount of time the four-strong creative team spent in the writers room. “We had eight months to write 10 scripts, in a team of four with Clive doing the writing,” he says. “Every two months we spent the week together and two or three times we went to a small cabin in Iceland. In the evening we watched TV shows and in the daytime we plotted terrible things happening in Iceland.

“This atmosphere and working structure is part of how this project was generated. The show has a very nice pace. It starts slow but it picks up more and more speed, and in every second episode there is something happening you wouldn’t have imagined – someone jumping out of a helicopter or an avalanche coming down on the village, for example. Hopefully the audience will wonder what will happen to the town and the hero in the next episode because they’ll be thinking it can’t possibly be more terrible than what has already happened.

“It was quite an unusual development process but it’s an encouraging example of how television works today where you have a very original story, setting and a solid first script, with everything you expect for a primetime drama. In Iceland the production process is terribly complicated but the price is quite competitive. Part of the equation was that we weren’t asking broadcasters for a fortune. We were asking for a reasonable proportion of the risk to be taken by several parties at the same time, and that’s how the budget slowly came together.”

Costing more than double the average production in the country, Trapped wasn’t cheap by Icelandic standards but Zimmermann says the results justify the outlay: “A normal Icelandic production can be produced for as little as €300,000 (US$326,200) an hour, and this is more than €750,000 – but the standard of the production is comparable to any high-end Scandinavian drama.

“The reason for that is the production company behind this is owned by Baltasar, who is mainly a feature film director and only works to the highest quality standards available. So the equipment was top, there was enough time to produce and some of the actors have international careers. The lead actor, Ólafur, is working with Steven Spielberg on The BFG so it’s the crème de la crème of Iceland on screen.”

Key to getting the broadcasters on board was convincing them Trapped would be unlike anything they had seen before, and the combination of Kormákur’s back catalogue, the Icelandic setting and Zimmermann’s experience in international drama completed the package.

“They were not commissioning broadcasters. Their level of commitment was below the commission, with less control, but the process was still very collaborative,” says Zimmermann, revealing how the broadcasters fell into the production process together.

“The director does his cut, I give my input. You send it to a few of the broadcasters and you get a feel for who wants to be more involved. A channel like BBC4 expects something authentic. It doesn’t have the infrastructure to be hands-on, so it relies on the mechanic to work.

“ZDF, however, was very hands on. The slot where it wanted to air Trapped is very competitive. We also had a lot of discussions with France Télévisions, which has similar needs for its audience. It came to rough-cut screenings, so that was the heart of the process in the end.

“We had some difficult moments, especially when things became very Icelandic. We had a comment on the first rough cut where someone said there was too much snow. The weather starts to get very bad after the first 10 minutes because the village is trapped by an ice storm, so there’s really terrible weather in the rest of the episode.

“The first reaction was, ‘We can’t have all this snow,’ but it looks fantastic with the effects, sound and music. We had to go through that process of saying this is a winter show, an Icelandic show.”

For Bradley, Trapped marked his first venture into a writers room, and he says he would happily repeat the process – perhaps during season two, which is under discussion. “The four of us would be in the writers room for several days. In the UK, you don’t do that. More and more projects are starting to have a version of the American writers room but it’s still quite rare. It was the first time I’d done anything like that. Rather than spend several hours with producers and script editors, spending days thrashing out the details was one of many things about the experience that I want to repeat.

“It’s an incredibly productive way of proceeding with developing a story. I’d never done 10 hours before and it’s amazing having that length of time. Obviously you have to find a story to fill it but to then have characters you can develop compared with an hour-and-a-half running time, it’s a great experience.”