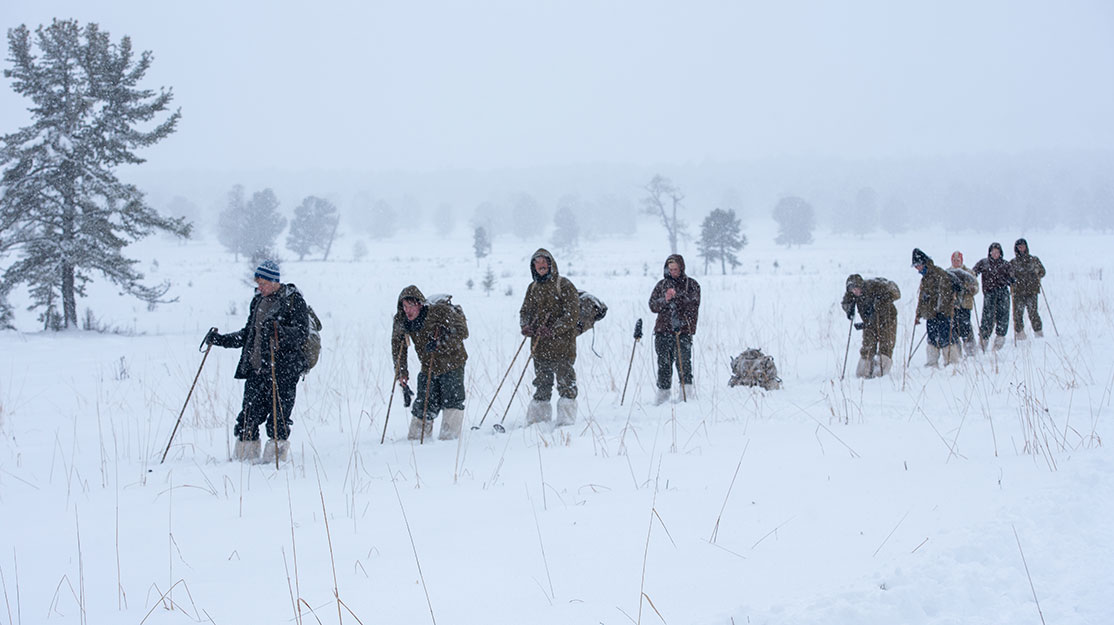 Based on real events, Russian thriller Pereval Dyatlova (Dead Mountain: The Dyatlov Pass Incident) posits what happened when nine students set out on a ski trek in 1959 and were never seen again.

In January 1959, nine students set out on a ski trek across the icy Ural Mountains — but they never reach their destination. When their bodies are discovered a month later, Soviet investigators are left puzzled by what might have happened to them.

Their tent was cut open from the inside, they are found in their underwear spread around the camp, some are even partially mangled. Whom or what did they run from? Why did they die, and how?

Based on the declassified files of the real case, Russian series Pereval Dyatlova (Dead Mountain: The Dyatlov Pass Incident) follows KGB major Oleg as he arrives in the province to conduct a strictly confidential inquiry. Troubled by his past as a Second World War veteran, he has a sixth sense, and death seems to follow him around as he digs deeper into the mysterious incident. With the help of Katya, the local medical examiner, Oleg is hell-bent on finding the truth.

But the more he learns, the more it becomes clear: the reason the students died will never see the light of day. No one can ever know what really happened, except him.

Starring Pyotr Fyodorov, Aleksey Bardukov, Ivan Mulin and Mariya Lugovaya, the eight-part series is produced by 1-2-3 Productions for Russian OTT service Premier, with Beta Film distributing the series worldwide. Valeriy Fedorovich and Evgeniy Nikishov are producers and directors on the series, which is written by Ilya Kulikov.

Here, Fedorovich and Nikishov discuss the mythology behind the show, why the story continues to fascinate people and the drama’s neo-noir style.

How would you describe the series?
Fedorovich: Dead Mountain: The Dyatlov Pass Incident is a mystery thriller based on the true story about a group of tourists who died under mysterious and tragic circumstances in the Ural Mountains in 1959.
Nikishov: This story became the subject of many books, documentaries and feature films, both within and outside of Russia. There are many theories about these events. People even went so far as to blame aliens, the KGB or the FBI. Even to this day, no book, article, or TV programme has managed to solve the mystery completely.

What were the origins of the project?
Nikishov: It all started with Ilya Kulikov, an acclaimed Russian scriptwriter known for his work on Russian TV series Chernobyl: Exclusion Zone, sci-fi action movie The Blackout and many other successful projects such as Glukhar and VIP Cop. Thanks to the helpful Russian law enforcement officials, Ilya got access to unique documents such as the criminal case of the Dyatlov Group, detailing the investigation process and the results of additional investigations conducted in recent years.
Fedorovich: Since everybody in Russia knows this story, any programmes or news about it quickly attract a lot of attention. Ilya is no exception. He has always been interested in it as well. When he showed us the scripts for the first two episodes, we were utterly amazed.

How did you work with Kulikov to develop the scripts?
Nikishov: We have known Ilya for more than 10 years now. Together, we have written many screenplays and released a large number of shows. As for Dead Mountain: The Dyatlov Pass Incident, Ilya wrote the scripts for all the episodes and then we met again and asked him some questions. He explained certain choices, elaborating on the details in the script. It was all quick and easy; we did not have to make many drafts. After that, we adapted the screenplay in line with the production process.

What did you know about the true events that inspired the series? Why does this story continue to intrigue people?
Fedorovich: Everyone in Russia knows this story and the numerous theories about it, and so do we. Evgeniy and I spent lots of time trying to understand why people still talk about it. There were many mysterious deaths in the history of the Soviet Union that could have turned into myths. So why did this particular one become a collective myth? This question was the impetus for us to produce the series.
Nikishov: At its core, this story is about people seeking freedom. These people tried to free themselves from the oversight of the Communist Party by going on a hike within the world of wild nature. Hiking used to help people to forget the fear they lived in. Besides, in these extreme conditions they could test themselves and their comrades. After all, hiking is a dangerous adventure, where your companions need to be your most trusted friends.
As Russian singer-songwriter Vladimir Vysotsky once sang in his Song about a Friend: ‘Haul your buddy up to the mountains, risk it / Just don’t leave him alone, by himself / Let him be tied to one line with you / There, you will find out who he really is.’
By stepping on this difficult and sincere path to freedom, the young men and women escaped into the untamed wilderness of the fierce Ural winter. There they lost their way and met a mysterious demise. It is a story about a failed escape, and that might be the main reason why the mythos became so popular in Russia.
Fedorovich: We are convinced this story will also arouse interest outside of Russia and our show will have great commercial success internationally.

Why did you think these real events would make an interesting series?
Fedorovich: Many details in this story contradict each other, which makes it quite difficult to explain the events rationally. Therefore, there are many different theories about it, but each one has its own blind spots.

How did your research inform the show?
Fedorovich: Many people felt like they were obliged to provide us with another book on the case once they heard we were working on this project – even our fellow filmmakers, who told us they knew exactly what had happened!
Nikishov: In order to explore the spirit of that time, we researched an enormous amount of documentary materials and compiled all the information on the events – detailed biographies of every member of the group, the photos from their cameras, the notes from their diaries and the detailed reports of the search team. Afterwards, every production department head received all the details.

How much is real and how much is fiction?
Fedorovich: All the characters and events are real. Only Oleg Kostin, the KGB special investigator and main character, and his social circle are fictional.
Nikishov: Although we tried to follow the information from the documents and the diaries, sometimes we had to speculate. For example, there is a popular theory that Igor Dyatlov and Zina Kolmogorova were romantically involved. The only evidence for this theory was her photo under Dyatlov’s passport, which was found after his death. Nevertheless, we decided to use this theory in order to enhance the drama.

How was it developed with the broadcaster?
Fedorovich: OTT platform Premier is our delegated partner, which automatically means full creative freedom. Premier has always been interested in producing bold and original projects; ambitious, spectacular shows of high quality that would stand out surprise viewers. That is what this series is all about.

What visual style did you create for the series?
Fedorovich: We chose the classic neo-noir look. However, we also wanted the visuals to be different from other modern shows in this style. In the beginning, we studied a ton of photos from the 1950s, taking every nuance into consideration, including the colours. For instance, take a look at a Time magazine issue from 1959 and pay special attention to the colour palettes. These were not dictated solely by fashion, but rather by the technical limitations that formed the visual style of that time.
Nikishov: In order to make the show more attractive for the modern audience, we watched modern movies set in that time and found out that some of them had been shot using 16mm film. When Pavel Kostomarov, the creative producer of our project and an extremely gifted, award-winning cinematographer, heard about our intention to use 16mm, he literally laughed at us.
This was not only because there is only one post-production laboratory in Russia capable of processing this kind of film, but also because other technical difficulties would arise from the decision and the cost would be tremendous. Despite all that, we decided to work with 16mm and we are very happy with our decision.

Do you have a particular way of working together behind the camera?
Nikishov: We have been working together for a long time now and find common ground quite easily. We have one simple rule: if we both like the take, we stay with it, but if one of us has any questions, we discuss it with the crew again. We were also very lucky with Pavel. He developed the project alongside us and performed many different functions on set. He would even shovel snow. He was our advisor and our mentor.

Where was it filmed and how do the locations reflect the story?
Nikishov: We filmed the pilot episode in the town of Kirovsk in the Murmansk region. It is beyond the Arctic Circle, 1,819km away from Moscow. The main part of the filming took place in the Altai Mountains, far away from big cities and civilisation and 3,667km away from Moscow. We also filmed near St Petersburg and Vyborg, as well as in and around Moscow. We chose those places in accordance with the demands of the production.

What were the biggest challenges you faced and how did you overcome them?
Nikishov: We needed locations with enough snow, which were not easy to find, since the winter was not snowy in Russia this year. We even had to postpone the filming.

How did you battle the freezing conditions on the set? How did this affect the way the series was filmed?
Fedorovich: Russian people don’t fear the cold! But honestly, there weren’t many particularly cold days. However, the cold affected our equipment sometimes.

How did you decide to end the story? What conclusions do you leave the audience with – or is the story still shrouded in mystery?
Fedorovich: We will give our explanation of the mystery. The investigator will tell the audience his version of the events, and then the audience will see our recreation of what happened to the Dyatlov group.
Nikishov: As the investigation progresses, our main character gradually rejects certain theories due to their inconsistencies. You can view this series as a corpus of knowledge about the Dyatlov Pass incident, and the ending to the story is like a cherry on top.