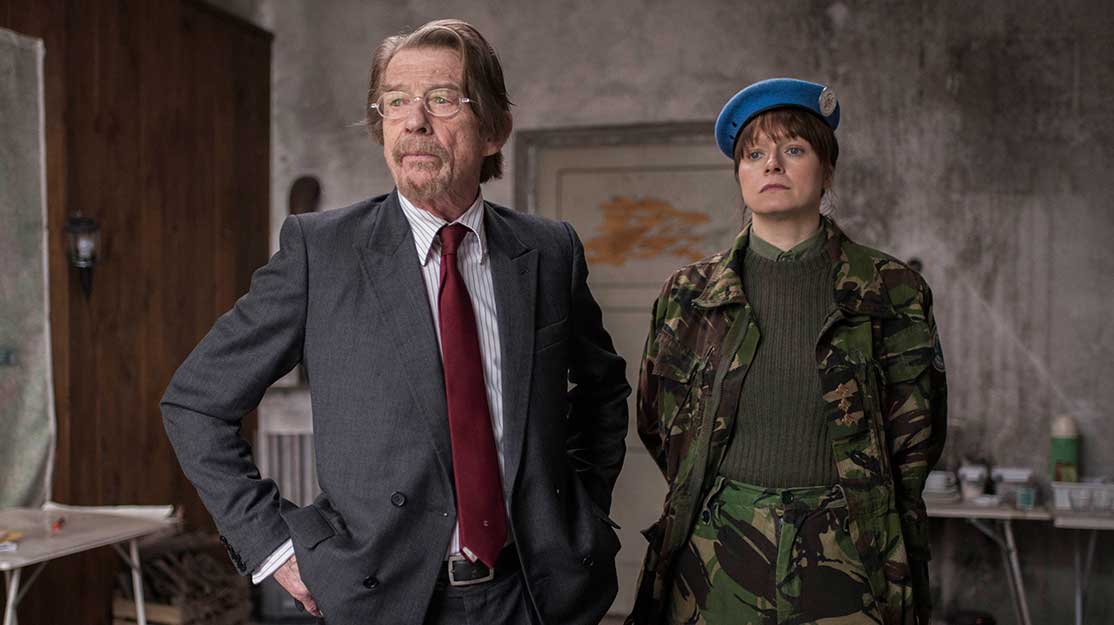 The Last Panthers: More than meets the eye

Ahead of The Last Panthers’ world premiere at Mipcom in Cannes this week, Michael Pickard discovers there’s much more to the drama than its classic jewellery-heist plotline suggests.

From the opening scenes featuring a daring diamond heist, The Last Panthers appears to carry all the hallmarks of a classic crime caper.

But that’s where the pretence ends, as viewers are plunged into a pan-European thriller set across three countries and portrayed in three languages.

Based on real events, the story begins with a robbery that looks to be the work of the notorious Pink Panthers gang, but the inadvertent death of a little girl sets off a chain of events across Europe that places British insurance loss adjuster (Samantha Morton), her nefarious boss (John Hurt), a French-Algerian cop (Tahar Rahim) and a Serbian gang member (Goran Bogdan) on a dangerous collision course.

Commissioned by Sky in the UK and France’s Canal+, The Last Panthers is written by Jack Thorne, based on an idea by Jean-Alain Laban and Jérôme Pierrat. It is produced by Haut et Court TV and Warp Films, and distributed by Sky Vision and StudioCanal.

If the plot seems misleading from the start, that was entirely the intention of the producers, who wanted to create a layered and far-reaching drama in which the action spans countries and decades.

Warp Films executive producer Peter Carlton says: “Our deliberate idea was to start with a classic crime story – a heist – and look at the ripples that go outwards and backwards. Through these three characters it takes you into a crime thriller with action and tense drama sequences in each episode but it also becomes more and more a personal drama and a tragedy around those three characters.

“The big attraction for us was not a crime series but using the crime to take us into another place. But if you do lure people in with a crime, you can’t forget that completely. You have to keep the audience with you and if you put a diamond heist at the front of something that turns into a very worthy, dull, wordy political drama, you’re not going to get thanked and no one’s going to follow you. You have to deliver on that promise of excitement and the thriller element while also bringing the audience with you through every twist and turn.”

Haut et Court’s Caroline Benjo, who also exec produces the six-hour series, adds: “We want to tease the viewer because there’s something very smart and sophisticated about TV audiences and this is where we want to go.

“The frustration and teasing is very important. Audiences want to be brought to something they don’t get all at once. Our world is extremely complex and this is what’s interesting. Our characters are going through a complex world and they intimate an inner world that’s even more complicated. You have to have a certain level of entertainment – it’s very action driven. There’s one quite spectacular action sequence in each episode but it was very important to link these to the story and the characters’ emotional trajectory.”

Benjo was approached by Pierrat and Laban with an idea for a film about the Pink Panthers, but she quickly identified that their story could go much deeper as a television miniseries. She brought Carlton on board with Warp as a coproduction partner, before Canal+ and Sky both committed to the series. Thorne was then brought in to write the script.

Carlton, who has worked with Thorne before on series such as Channel 4’s This is England, says the writer’s distinctive voice, coupled with his knowledge of European politics, made him a standout candidate for the job.

“Knowing we were making a big European tragedy, we needed a writer who could handle big emotion on a big canvas,” he says. “A lot of British writers sare a bit shy and embarrassed by big emotion and I knew from working with Jack on This is England that this wasn’t the case with him. Although this is a very different show, it’s a melodrama in the best sense of the word.

“He’s a fearless writer, he masters genre and has a distinctive voice, can write sophisticated politics and isn’t scared of big emotions. So when we proposed it to Jack, he bit our hands off.”

Bringing Thorne on board meant The Last Panthers had a writer who would put together a tightly scripted, extremely focused story across six episodes. There will be no vague closing scene that leaves things open for a second season.

“It’s not designed to be a returning series,” says Carlton. “We felt six episodes was the right length for the story. There’s a lot of stuff that didn’t get put into it but I don’t think we’d go back to the Panthers again. However, we did become fascinated by this way of storytelling: that one event brings together two or three different destinies, allowing you to explore backwards and forwards at the same time.

“So Jack, Johan (Renck, the director) and us are sitting down and talking about new stories. Whether what comes out of that process feels like The Return of the Last Panthers, The Last something else or something completely different, it’s always tempting to follow your success – but we haven’t had any success yet. There’s rich creative ground but it’s quite hard to see what exactly what that is at the moment or what it might turn into.”

As European coproductions become more commonplace, Benjo says they are still “one of the trickiest things” to do, adding that it was integral to the project that everyone shared the same vision for the series.

“Not only was there a shared ambition and approach between us and Haut et Court but we also have, in Canal+ and Sky, an aspiration, an ambition and a desire for a certain type of programme that was very similar,” Carlton explains. “In detail there were differences but we never had either us as producers or them as broadcasters pulling in different directions.

“They wanted something ambitious, something with layers, that on the one hand has excitement and is a thriller but underneath it is finely driven more by character and emotion. We all agreed it was going to be pan-European, and it needed some big names and great actors to carry it and keep it as authentic as possible. We agreed on day one that we would shoot in certain countries and in original languages and we never varied from it. That isn’t always the case.”

The series takes place in London, Marseille and Belgrade and, as such, the action is filmed in English, French and Serbian. Above any other challenge facing the €20m (US$22.4m) production, Benjo says the multi-lingual approach to The Last Panthers was the biggest obstacle.

“The Last Panthers is spoken in the language of the protagonist,” she says. “But when they’re together, the common language is English. So we had to do enormous work on the adaptation because Jack writes in English so we had to do very precise work to turn it into French and Serbian. We also had two broadcasters with their own sensitivities. It was interesting because we tried to meet our broadcasters’ needs as much as possible without going against the project and it’s almost like working for the UN. You are constantly peacekeeping, trying to keep everything as smooth as possible.”

The size of the production budget, coming in at more than €3m per episode, also led to conversations about how best to use it. Benjo adds: “We always put all our money on screen because if we don’t, there’s no more money coming back.

“Everyone’s talking about feature film versus TV production. What’s happening in TV production now is that it’s not ‘how can we make as much money as possible?,’ it’s ‘how can we put all the money on screen?’ And ‘how can we have production values that will be mind-blowing for the people who watch?’ Here I think we have found that level. Everything is filmed in real countries, the action scenes are quite spectacular and it’s very well crafted. It’s definitely a beautiful-looking series.”