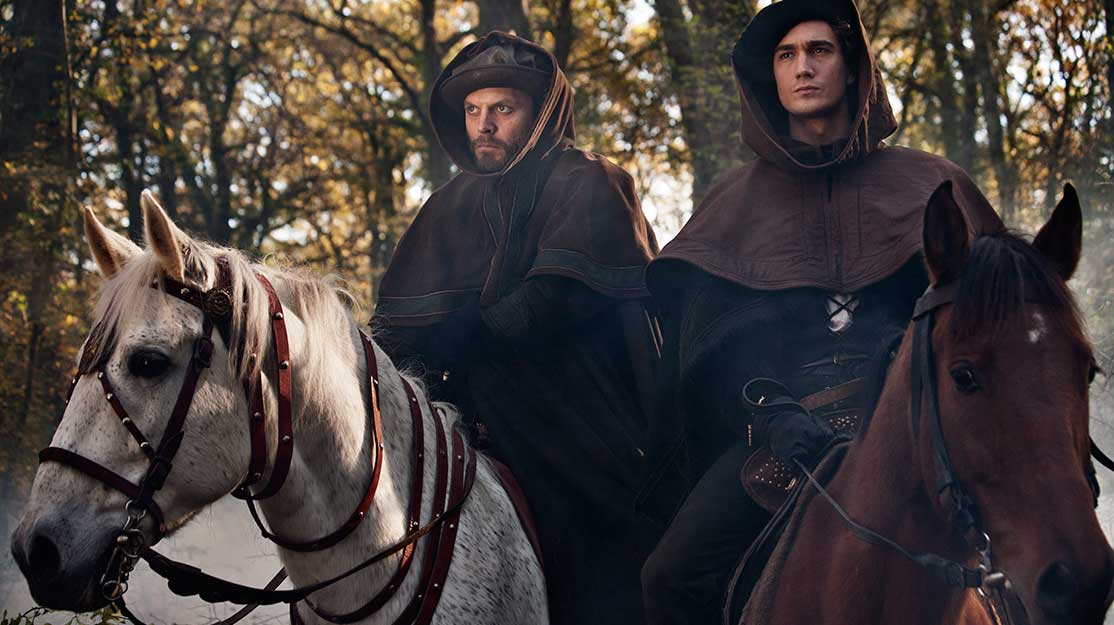 Dustin Hoffman and Richard Madden are father and son in Medici: Masters of Florence, the story of one family’s rise from simple merchants to power brokers in Renaissance Italy.

When Frank Spotnitz was looking for an actor to portray the head of one of the most famous families in Italian history, the seasoned showrunner sought a screen legend who had enough gravitas to carry the role.

So when Dustin Hoffman agreed to play Giovanni de Medici, the writer was understandably excited.

“He was amazing – I’ve grown up my whole life watching him, so I can’t believe we get to have him,” Spotnitz says. “I was so nervous when I spoke to him on the phone the first time!

“We needed someone to present both the hardness and the humanity of this character. There aren’t many people in the world who have that. And Dustin’s such a brilliant actor with such presence. It was a bit unreal having him there.”

Hoffman heads the cast in Medici: Masters of Florence, which charts the family’s rise from simple merchants to power brokers in 15th century Florence.

As the family’s influence sets off an economic and cultural revolution, patriarch Giovanni de Medici (Hoffman) is murdered in mysterious circumstances. His sons, Cosimo (Richard Madden) and Lorenzo (Stuart Martin) are then forced to confront a range of enemies plotting to oust the Medici from power.

The series, produced by Lux Vide and Spotnitz’s Big Light Productions, receives its world premiere in the Tuscan city next Friday before it airs on Italian pubcaster Rai. A second season has already been commissioned.

Spotnitz (The Man in the High Castle, The X-Files) and co-creator Nicolas Meyer (The Seven-Per-Cent Solution) have a long-standing relationship and the former immediately thought of his sometime collaborator when the chance to dramatise the Medici was first proposed.

“Lux Vide, approached me two years ago and said they were going to make a show about the Medici,” Spotnitz recalls. “They had a script, which they weren’t happy with, but they thought the show had huge potential. They wanted the best locations, the best costume designer, the best production designer, everything. I said it sounds good to me!”

And the producers were good to their word, particularly when it came to locations. Medici: Masters of Florence was shot entirely in original locations, adding a layer of authenticity to the story, which blends elements of political thriller and murder mystery with a family saga.

“There’s some CGI in the show but not much,” Spotnitz reveals. “We had an amazing production designer who knew everything about the 15th century. So we drove all around these medieval villages in Tuscany. It’s just amazing how much is unchanged. You just have to take down the signs and get rid of some cars and it’s like you’re in the past.

“And the access Lux Vide was able to get… I had the mayor of Florence showing me around the Palazzo Vecchio, seeing all the rooms and the cell where Cosimo really was imprisoned. And we got to shoot in the real cathedral in Florence. It was astonishing. We’re used to seeing period drama like this where you shoot in Romania or Hungary or Bulgaria – some place that’s less expensive. So to actually be able to shoot Italy for Italy is quite extraordinary.”

Filming in the Tuscan countryside did have an impact on the show’s shooting schedule, however, as scenes from all eight episodes were shot based on the production’s location. Having director Sergio Mimica-Gezzan take charge of the entire first season added extra continuity to the style and tone of the series.

As Spotnitz explains: “It really had to be one director because of the way we were shooting. We’d go to Montepulciano and we’d shoot all the scenes from all eight episodes there, and then we’d move to Pienza, so you couldn’t divide it all up between different directors. It would have been impossible. It’s quite a jigsaw puzzle.

“The show has a fairly classical style a la The Godfather. It has the lustre of The Godfather but with the beauty of Italy and the colours of the Renaissance. But for me, Sergio’s real gift is with actors. I’ve never seen actors respond better to a director than to him. I remember the first day when Dustin Hoffman was in Rome and we rehearsed and he said to him, ‘You’re the best kind of director for an actor,’ because he’s very good at listening to actors and guiding them and making them feel understood.”

Spotnitz hadn’t previously been interested in working on a historical drama but once the story was stripped down, it was a tale of two brothers searching for the person who murdered their father that stood out to him.

The fact that that the truth behind Giovanni de Medici’s death is unknown also meant Spotnitz and Meyer could use history to their advantage.

“We have taken a few liberties here and there [with historical accuracy] but the truth is there’s an awful lot that’s not known,” he says. “For instance, there’s not a lot written about Cosimo’s wife, Contessina [played by Annabel Scholey], so we were trying to connect the dots, trying to imagine the human being who did these things. I think we were fairly faithful to the facts, but you realise when you write one of these things how much of it is an interpretation.

“[The Medici] were trying to change the world. They were making money by providing credit and trade to the common man and it created social mobility and an opportunity for people to better themselves, and that was radical. It felt like a very relevant issue for today.”

The story of the Medici was particularly personal to Lux Vide heads Luca and Mathilda Bernabei, whose father was born in Florence. Momentum behind Italian drama has been building, with shows such as Gomorrah winning acclaim on the international stage, and Luca Bernabei says Medici grew from his ambition to create a series that spoke about the creation of modern Italy.

Spotnitz was then the key to turning a historical story into a contemporary murder mystery.

“He gave us this wonderful way of writing that was able to bring history alive,” he says. “But we were giving him the possibility to shoot in the real places where the story actually took place. We were shooting where the Medici lived instead of in a back lot in Bulgaria or wherever. That’s what makes it different from all the other Italian shows.

“Even the costumes, the concept was they were bankers so we gave the men a banker style – black, grey, blue. It’s very contemporary, like [styles seen in] the City of London. For the women, we used rigid geometry inspired by the greatest fashion designers. We tried to avoid ‘museum’ costumes in order to bring the show to life.”

The decision to produce Medici in English was made early on in order to broaden the show’s reach. “From the beginning they knew they wanted it to be in English,” Spotnitz says of the producers. “You reach a very small audience with Italian drama. Even with the most successful Italian drama – Gommorah, Inspector Montalbano – there’s only a certain number of people in the world who are willing to watch a show in a subtitled format and you just reach a huge audience with English. So they knew from the beginning it would be in English and they would try to get a first-class cast.”

Bernabei adds that the challenge for Medici, and Italian drama as a whole, is to bridge the gap to UK and US dramas, which often have a budget many times larger than those filmed in mainland Europe.

“Our challenge was to show we can make a really international product, not something local, not regional,” he continues. “But momentum in Italy is building because of Gomorrah, The Young Pope and now Medici. So this is a new era for our production. There are three or four producers in Italy that are able to produce international drama. It is changing our business. Producers are able to collect more money in the market.

“This is also [distributor] Wild Bunch’s first TV project, so it was a wonderful combination of a company like ours specialising in television working with a company like them that specialises in cinema. It’s very interesting because we’re different but similar and we both love a challenge. We were talking the same language and that was wonderful.”

Work is now well underway on season two, with production due to begin by the end of the year. The story will focus on Lorenzo the Magnificent, one of the most powerful statesmen in Renaissance Italy and Cosimo de Medici’s grandson.

“It’s a family saga, it’s a murder mystery and it’s a political thriller – it’s all of those things,” Spotnitz says of the show. “The Medici were who Machiavelli wrote about. They’re really good at manipulating politics but the story is very much rooted in the family.”

He adds: “It’s such an incredible time in television. Yes, it’s amazing in the US with this explosion of drama, but in Europe, it’s a different story. Europe has been so underserved for so long and people have been deprived of opportunity for so long, primarily because the US wouldn’t buy European drama. That’s changing, and now there’s huge appetite and they’re looking for ways to buy it, which is great for Europeans because it creates opportunities to make these large-scale shows that compete with the best of US drama.”