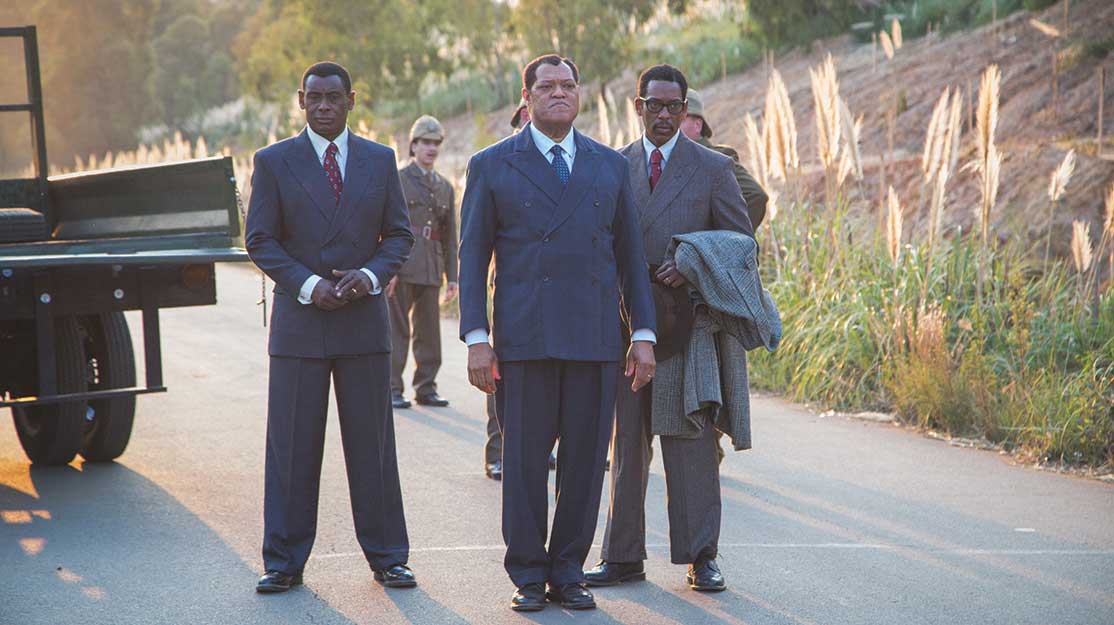 For the first time, the life of Nelson Mandela will be retold across six hours of television. DQ speaks to the cast and crew about bringing Mandela’s personal and political struggle to the small screen.

In the hours after Nelson Mandela’s death on December 5, 2013, former US president Bill Clinton tweeted his condolences. “I will never forget my friend Madiba,” he wrote.

The name of the Thembu clan to which Mandela belonged, ‘Madiba’ quickly became associated with him as a term of respect and endearment – and now lends itself to the title of a six-hour miniseries that charts the activist and politician’s journey to bring racial equality and democracy to South Africa.

Directed by Kevin Hooks, the event series is based on two Mandela books, Conversations with Myself and Nelson Mandela by Himself.

Laurence Fishburne stars as Mandela alongside a cast that also includes David Harewood and Orlando Jones. The latter portrays Oliver Tambo, president of the African National Congress (ANC) from 1967 to 1991 and founder of the ANC Youth League together with Mandela and Walter Sisulu.

Speaking to DQ during filming in South Africa, Fishburne describes the opportunity to play Mandela as “wonderful.”

“I accepted it immediately,” he recalls. “I was very humbled to be asked. Like many people, I have been inspired by his life and his story. It’s just a great honour to be doing it.

“What’s great about this is we have six hours to tell the story. It’s much bigger than just his life. It was very important [to Mandela] that viewers understand the struggle for the end of apartheid was not just down to him. It was a group effort. All organisations came together. The series has much more depth than other TV shows or films about Mandela.”

Though the actor never met Mandela in person, he acquainted himself with several people that were close to the former South Africa president, including Zelda La Grange, his personal secretary.

“I spent some time at the Nelson Mandela Foundation looking at a lot of personal effects and writings, and I also went down to where he grew up,” Fishburne says. “Being here in South Africa, you can reach out and touch the history. It adds a level of authenticity you cannot manufacture anywhere else.”

The former Hannibal and CSI star admits the most challenging aspect of playing Mandela has been the “gruelling” production schedule, but jokes: “I’m pretty good at picking up accents.”

He adds: “This is a universal story and I don’t think it will ever get old. Mandela was one of the giants of history and as such he will not fade. His legend will get bigger and bigger.”

Madiba is produced by Blue Ice Pictures and Out of Africa Entertainment in association with Leftbank Pictures and Cinema Gypsy Productions. The show is set to premiere on BET Networks in the US in 2017, while worldwide distributor Dynamic Television has already sold it to eTV in South Africa.

Blue Ice president Lance Samuels – who executive produces Madiba with Mandela’s grandson Kweku Mandela plus Daniel Iron, Neil Tabatznik, Steven Silver, Andy Harries and Loretha Jones – says the project evolved from his belief that it is impossible to do justice to Mandela’s story in the running time of a feature film.

“So we decided to do a miniseries, which gives us the time and opportunity to explore the man, the myth and the mystery,” he explains. “But to understand what Nelson Mandela achieved, you need to understand what he was up against. So we also explore his enemies and what they were going through. They believed in what they were doing and, by covering both sides, you get a better picture of Mandela.

“When we met him before he died to ask for permission [to make the series], it was one of the most amazing moments of my life. When we spoke to him about it – and this is also prevalent in his books – he said by all means make the series but remember it’s not just me. There were hundreds of people who made sacrifices. That’s why we also covered Tambo and Sisulu, to tell the story of those who helped bring South Africa to freedom.”

On set, Samuels says the “amazing” support from local residents made production much easier as the crew used as many real locations as possible, with the exception of Robben Island – where Mandela spent 18 of his 27 years in prison – which was replicated in a warehouse.

Describing the visual style of Madiba, production designer Robert van de Coolwijk says: “We used a lot of pastel colours – earthy greens, reds and ochers. We didn’t want things to jump out at you so we toned down some colours. The pictures are quite simplistic. At that time in South Africa, many people were living in survival mode. The things they had were to survive, they had a purpose. So there was a contrast with the people living in townships in poverty and the people in government.”

The crew rebuilt Vilakazi Street, in Orlando West, Soweto, where Mandela lived from 1946 to 1962. “It was interesting to see how we could get a lot of mileage out of it,” explains van de Coolwijk, whose credits include The Book of Negroes and Generation Kill. “If you changed the angle just enough, it was another road. So it was used as other roads in the township, especially during the student riots in 1976.

“The other houses are a facade but we actually built Mandela House. We built the village where he grew up, Robben Island and the courthouse. It was a journey of discovery for me and the crew. It’s not just fiction – this is stuff that actually happened that had a big impact on this country.” 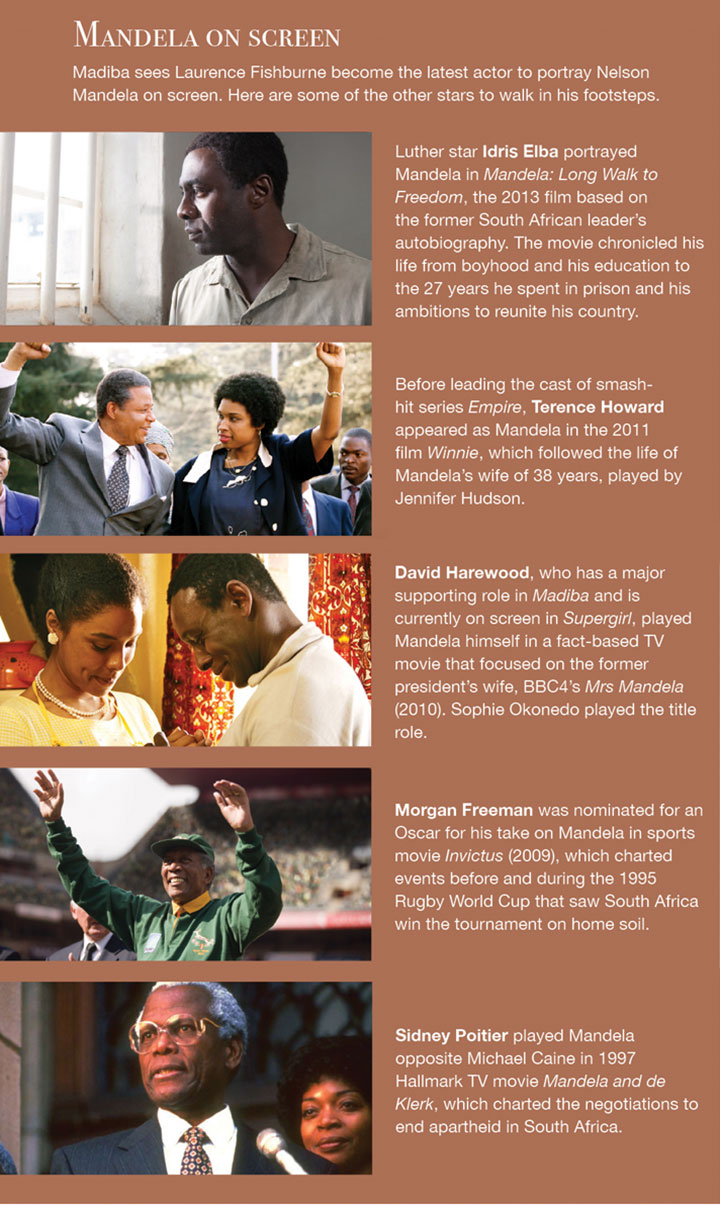 Writers including Paul Webb, Jane Maggs and Janine Eser came on board to work through Mandela’s life and bring his complex story to the screen, before Kathleen McGhee-Anderson came in towards the end of the writing process to bring together various drafts to form the final six shooting scripts.

Madiba is “biblical in its scope, it’s epic,” McGhee-Anderson says. “Because there’s such a vast tapestry, because he means so much to a nation and to the world and because so many people know this story and so much has been written about him, the big challenge was getting it right. There’s more information about Nelson Mandela than any character or figure I’ve ever researched, perhaps with the exception of Winston Churchill or George Washington.”

The presence of Mandela’s grandson Kweko Mandela proved invaluable, therefore, to help find the central character’s voice, both on page and on camera. But McGhee-Anderson, who is now an executive producer on OWN Network’s original drama Greenleaf, is quick to point out that Madiba is not a history book or a documentary.

“We’re talking about a drama here at the end of the day,” she says. “It’s a drama that has to take dramatic licence in order to move the story forward, in order to cover the plot points to reach the climactic moment that the end of every episode has to reach. It’s a challenge in finding that point that feels both satisfying and at the same time suspenseful enough to move the story forward and keep the viewer coming back.”

Mandela’s story is undoubtedly worthy of being brought to screen – but why is now the right time for Madiba, following on the heels of big-screen efforts Long Walk to Freedom, Invictus and others?

“It’s the most important story South Africa has to offer,” Samuels says. “Even though there have been a number of movies and documentaries made on Nelson Mandela, a definitive series has never been made. That’s what we set out to do, and I think we have achieved it.”

And for the actor to play Mandela, there was only ever one choice: “We went after him from day one,” Samuels adds. “When we found out Laurence had always wanted to play him, it was a marriage made in heaven. He came on research trips and we took him to where Nelson Mandela was born. He was amazing. The amount of work and effort he put in was spectacular. He knocks it out of the park.”

Before she finished scriptwriting, McGhee-Anderson reveals she was able to sit in on several cast rehearsals and caught Fishburne take to his latest role.

“The first time I heard Laurence Fishburne perform Nelson Mandela, I understood immediately why we have another Mandela on screen,” she says. “Hearing Fishburne become Mandela brought tears to my eyes. I understood he brings a quality to it I hadn’t heard before, and that’s what happens when you have a great actor.”